In 1916 the Sykes-Picot agreement between Britain and France established the respective zones of influence in the Levant after the expected downfall of the Ottoman Empire; the agreement was never actually implemented in its original terms, but it was at the root of the 1923 decision by the League of Nations to place Syria and Lebanon under French Mandate (Administration). 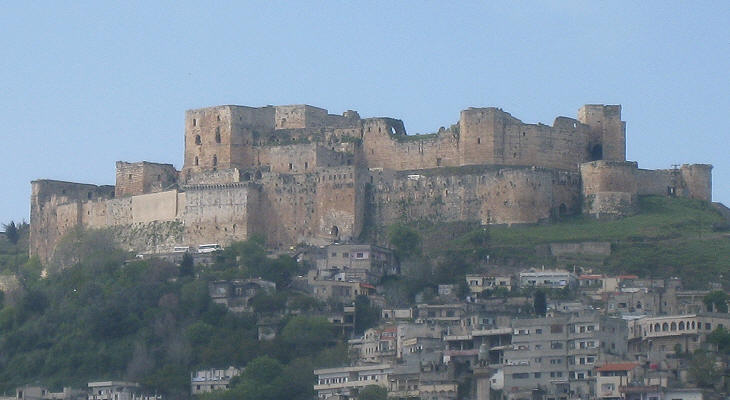 It is built upon the top of an insulated hill (..) and it is one of the finest buildings of the middle age I ever saw. It is evidently of European construction; the lions, which are carved over the gate, were the armorial bearings of the Counts of Thoulouse (and of Tripoli), whose name is often mentioned in the history of the crusades. It is surrounded by a deep paved ditch, on the outside of which runs a wall flanked with bastions and towers. The walls of the castle itself are very regularly constructed, and are ornamented in many places with high gothic arches, projecting several feet from the wall. The inner castle, which is seventy paces in breadth, and one hundred and twenty in length, is defended by bastions. A broad staircase, under a lofty arched passage, leads up from the gate into the castle, and was accessible to horsemen. In the interior we particularly admired a large saloon, of the best Gothic architecture, with arches intersecting each on the roof. (..) Figures of lions (symbols of Mameluke Sultan Baibars) are seen in various places on the outer wall, as well as Arabic inscriptions, which were too high to be legible from below. (..) There are roses sculptured over the entrance of several apartments (one of which is shown in the image used as background for this page).
John Lewis Burckhardt - Journal of a Tour from Aleppo to Damascus in February and March, 1812.
French authorities emphasized the role of the Crusader States in the region to justify their presence in Syria; the Crusaders were called Franks (al-Faranj) by the Arabs and this helped in identifying them with France; while it is true that many leaders of the First Crusade came from northern France, the expedition was composed also of knights from southern France, Germany and southern Italy.
The castle of Krak des Chevaliers was chosen as the symbol of French heritage; its ruins were freed of the villagers who had nested their homes in the ancient walls and the site was thoroughly restored, even with intervention of the army; in 1933 it was declared a French National Monument. Since then it is a "must see" of all tours of Syria, although perhaps the reconstruction effort went too far. 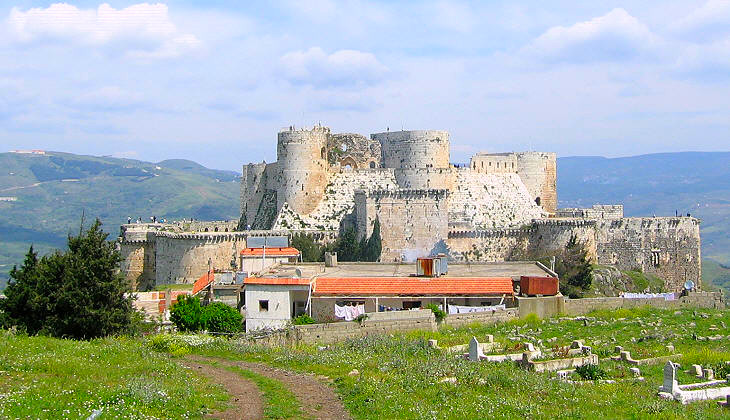 View of the south-western side

The castle is located on the northern side of the Gate of Homs (in Arabic Nahr el-Kebir), a large breach in the mountain ranges which divide the coastal strip from the interior of Syria; the site was fortified by the Emir of Homs (ancient Emesa) in 1031; he placed a garrison of Kurdish soldiers there. The name of the castle was Hosn al-Akrad (castle of the Kurds) from which Krad or more commonly Krak. Perhaps because the reference to the Kurds is politically sensitive in today's Syria, the current official name is Qalaat al-Hosn, literally the castle of the fortress. 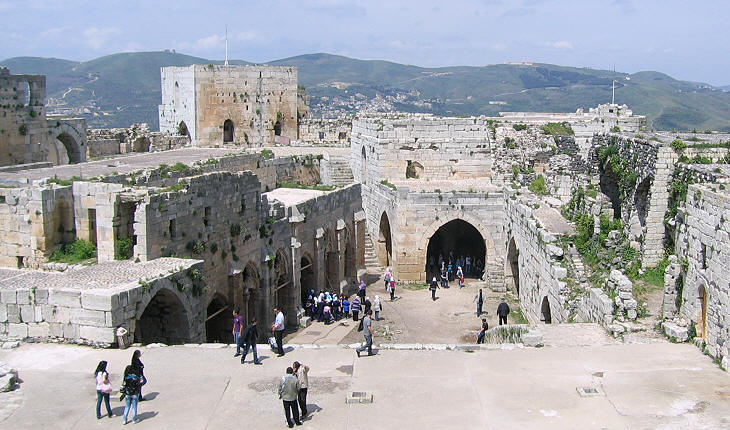 Older part of the castle

Hosn al-Akrad was seized by Raymond of St. Gilles in 1099 on his way to Jerusalem; a few years later he became the first Count of Tripoli, the last Crusader State which was established in the Levant; he fortified Hosn al-Akrad to make it the starting point from which to launch new campaigns. The expansionist phase of the First Crusade however soon came to an end; in 1128 Zengi, Atabeg of Aleppo and Mosul gradually took control of the Orontes valley by seizing Hama and he started to threaten the Crusader States; he eventually captured Edessa (today's Sanliurfa) and put an end to the first Crusader State. The Counts of Tripoli realized that their castle on the Gate of Homs required strengthening and a larger garrison; they therefore called in the Knights Hospitallers, a military religious order, which still exists today with the name of Sovereign Military Order of Malta (see some pages on Rhodes which was ruled for two centuries by the Knights Hospitallers, on Malta and on the Priory of the Order in Rome).
The Hospitallers redesigned the castle around a small triangular courtyard; it was probably at this time that the castle acquired its new name (Chevaliers=Knights). 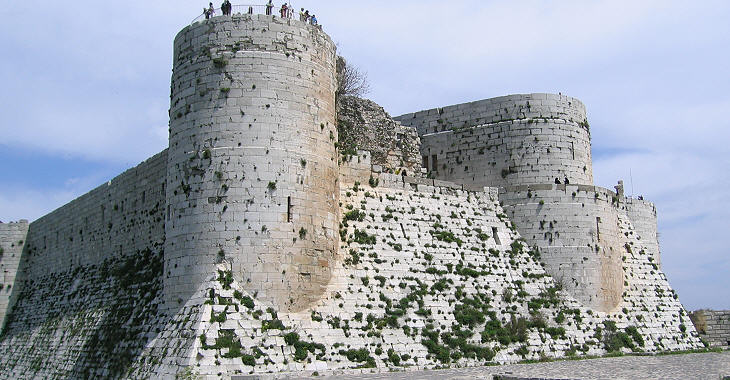 Nur ad-Din, Zengi's son, launched several campaigns against the remaining Crusader States; in the County of Tripoli he managed to briefly seize Tortosa, but he vainly besieged Krak des Chevaliers in 1163; in 1169 he added Egypt to his possessions, thus creating a united Muslim front against the Crusader States.
The Hospitallers realized Krak des Chevaliers needed to be upgraded and the original structure was surrounded by new walls and towers. In 1188 Saladin, the conqueror of Jerusalem, failed to seize the castle, which by then acquired the fame of being impregnable; in that same year the Counts of Tripoli assigned also the Castle of Marqab to the Hospitallers. 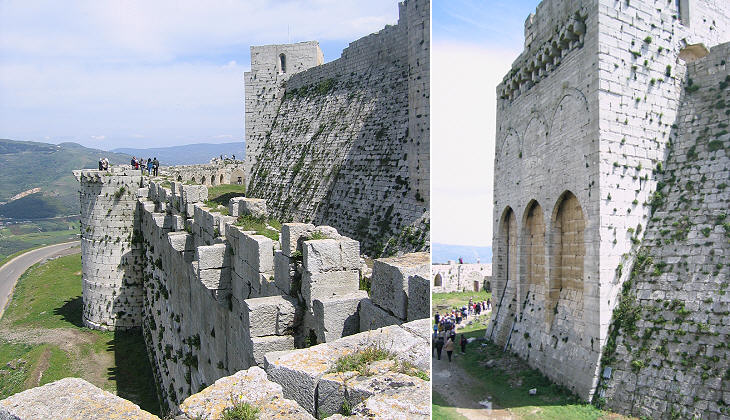 The Hospitallers further strengthened Krak des Chevaliers during the XIIIth century; they built a new enclosure and a large moat between this and the old one.
A series of crusades were called to reconquer Jerusalem; they failed to reach their objective, but they helped the Crusader States in their fight with the Ayyubids, the members of the dynasty founded by Saladin.
In 1260 the Mongols invaded Syria and they made an alliance with the Armenians and the Crusader States; the Ayyubids lost all their possessions; the Mongols however were unable to continue south to Egypt, which by that time was a Mameluke possession. 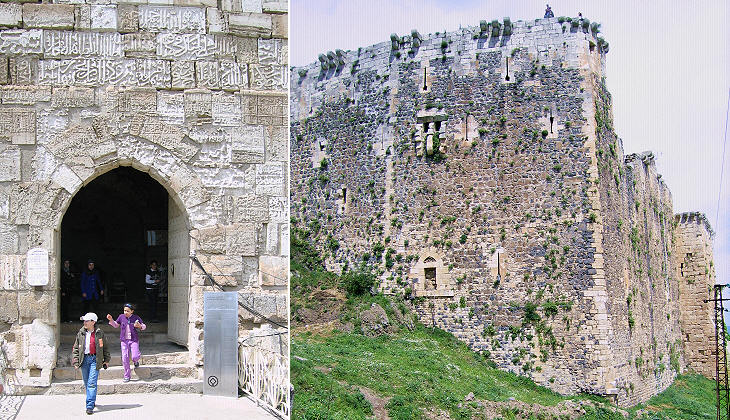 (left) Entrance with a long inscription by Baibars celebrating his seizure of the castle; (right) south-western corner of the outer walls (Baibars built large baths in the tower to the far right)

In 1269 Mameluke Sultan Baibars conquered Antioch and then turned his attention to the County of Tripoli; in March 1271 he laid siege to Krak des Chevaliers; his sappers opened breaches in the external walls and the assailants managed to penetrate inside the castle; the knights retreated to the older part for a last defence; Baibars however did not want to destroy all the fortifications; he knew that preparations were being made for a Crusade (the Ninth) led by Prince Edward of England and he thought the castle could prove useful to him; according to the traditional account he forged a letter to the defenders by the Count of Tripoli in which a honourable surrender was recommended; the knights accepted and were granted safe conduct to Tripoli.
Baibars restored the walls of Krak des Chevaliers and added two towers to its south-western side, the most critical because it faced the top of the hill.
In 1289 the Mamelukes conquered Tripoli and in 1291 Tortosa and Acre; in 1302 Arwad, a small islet opposite Tortosa, which was still held by the Knights Templars fell; these events made Krak des Chevaliers useless from a military point; the castle slid into obscurity until the French revived its former splendour. 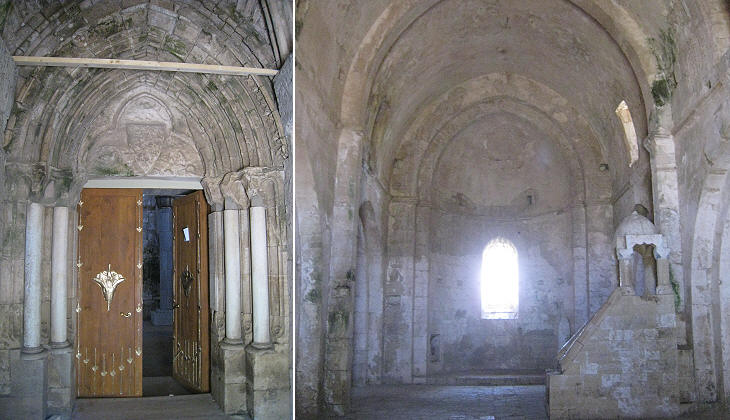 (left) Entrance to the Salle des Chevaliers (Hall of the Knights); (right) former chapel which was turned into a mosque

When Baibars seized Krak des Chevaliers, the Knights Hospitallers were in the process of completing a renovation of the facilities located around the courtyard of the older part of the castle; these included a bakery, a refectory, warehouses and latrines; in addition the knights built two large halls and a chapel in pure French Gothic Style. 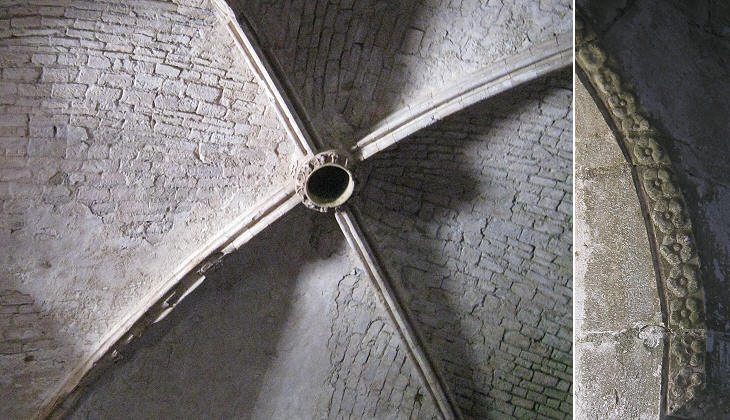 Details of the Hall of the Knights