- Villa del Casale: Decoration and Myth
(left) Temple to Hercules at Agrigento; (right) detail of the apse of Palermo's Cathedral

You may wish to read an introduction to this section or a page on the buildings of Villa del Casale first.

Mosaics in the portico of the Rectangular Peristyle

The number of elaborate mosaics which decorate Villa del Casale impresses today's visitors who see it as evidence of the wealth of the landlord. This is true, however one must bear in mind that mosaics were not the most expensive flooring technique. At Villa dei Quintili, a luxury mansion along Via Appia Antica the floors were covered by elaborate marble inlays. It is very likely that for the landlord of Villa del Casale was cheaper to hire some talented mosaic craftsmen than to buy expensive marbles (which he used for the Basilica, the most important hall of the villa). The craftsmen came from the provinces of Africa (Tunisia/Libya) and Mauretania (Algeria) where the making of coloured mosaics had achieved a high level of refinement. You may wish to see a mosaic in Sabratha (Libya), depicting a lion inside a medallion. Mosaics along the Elliptical Peristyle

The depiction of animals (especially wild ones) and birds was a very popular subject for mosaics throughout the whole Roman Empire. In the image shown above they were combined with acanthus strolls, another popular decorative pattern. This gave more vivacity to the mosaic as it can be seen also in a similar mosaic of Bulla Regia in Tunisia.

Geometric mosaics: (left) Room in the northern side of the Rectangular Peristyle; (right) Room of the Seasons

Geometric mosaics had the advantage of not having to be seen from one particular position. In Rome they were very often black and white even in Villa Adriana. At Villa del Casale very many colours were employed and the final result must have been similar to that of an oriental carpet. Depending on the size of the floor the geometric patterns could enclose small images of the Four Seasons, or the Nine Muses or the Twelve Months as in Thysdrus in Tunisia. 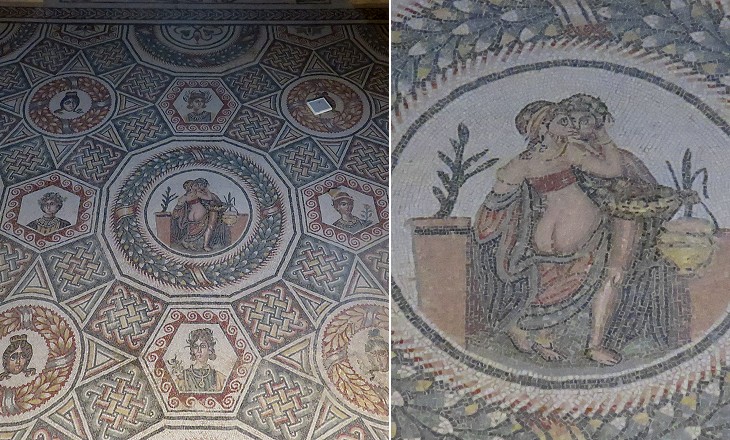 The Romans slept in a small rooms which fostered intimacy. Their decoration had very often elements with an erotic content. This mosaic was most likely made by two craftsmen. One made the geometric patterns and the images of the Four Seasons, which are not particularly well executed. The central medallion was designed with more care by a pictor imaginarius (painter of images) who had a higher degree of skill. This distinction is recorded in a decree issued in 301 by Emperor Diocletian to control inflation: a pictor imaginarius was expected to earn 150 denarii per day, twice as much as the other craftsmen involved in decorating a house. 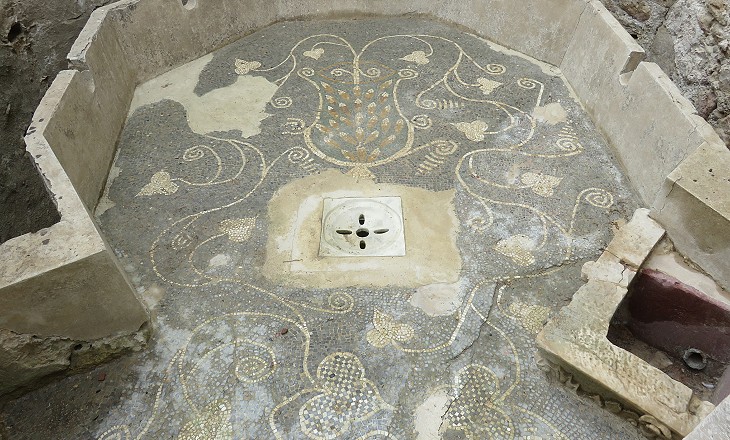 Latrine behind the Elliptical Peristyle

If the pavement be composed of tesserae, the edges of them should be completely smoothed off, or the work cannot be said to be well finished.
Marcus Vitruvius Pollio - de Architectura, Book VII - Loeb Classics.
The techniques the Romans utilized for mosaic floors ensured they were water proof and could be placed in baths, latrines and the likes. The decoration of this small latrine is based on a grapevine growing from a kantharos, a cup used for drinking wine which was associated to Dionysus. Very often four kantharos were depicted at the corners of large mosaics (Thysdrus). 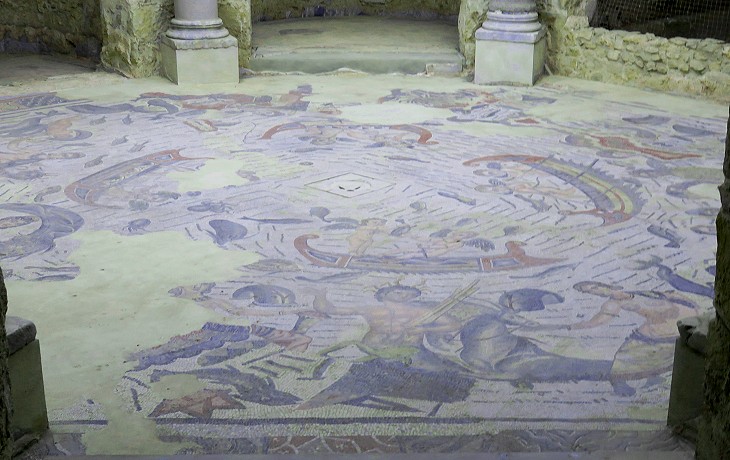 Mosaics depicting sea gods and goddesses, Nereids, tritons and other sea-monsters were particularly suited for the decoration of baths and the octagonal hall of the frigidarium was large enough to contain a complex mosaic which could be seen from all sides, similar to that in the frigidarium of Terme dei Sette Sapienti at Ostia. 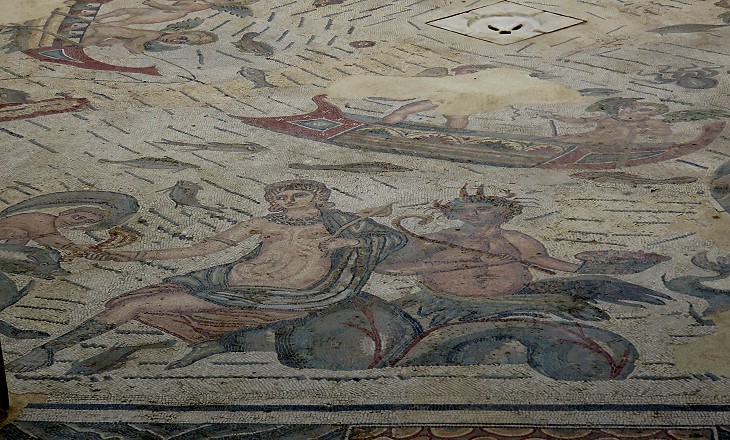 The subject was very popular throughout the whole Roman Empire, not only in the Province of Africa (e.g in Bulla Regia, Hippo Regius and Sousse), but also in the Province of Syria with fine mosaics at Antioch, Zeugma and Philippopolis. 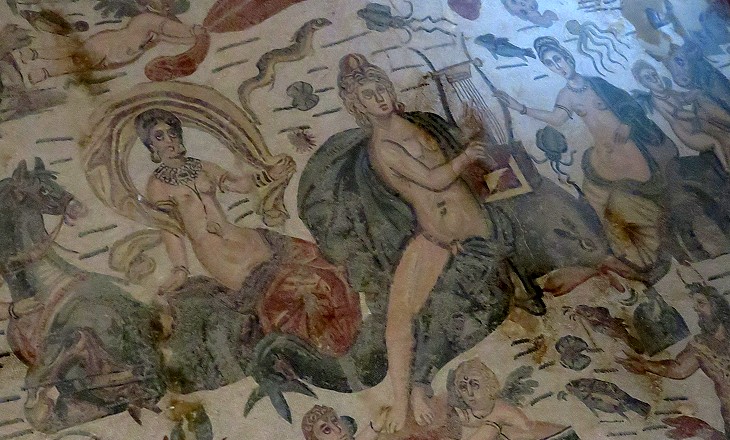 Hall of Arion Rescued by a Dolphin

Arion, a famous citharist, was kidnapped by pirates:
Arion said: 'I don't plead for life,
But let me take up my lyre and play a little.'
They granted it, laughing at the delay. (..)
And, plucked by his thumb, the strings gave out their music,
Such a melody as the swan's mournful measures,
When the cruel shaft has transfixed its brow.
At once, he plunged, fully clothed into the waves:
The water, leaping, splashed the sky-blue stern.
Then (beyond belief) they say a dolphin
Yielded its back to the unaccustomed weight.
Sitting there, Arion gripped the lyre, and paid his fare
In song, soothing the ocean waves with his singing.
The gods see good deeds: Jupiter took the dolphin
And ordered its constellation to contain nine stars.
Ovid - Fasti - Book II - Translation by A. S. Kline 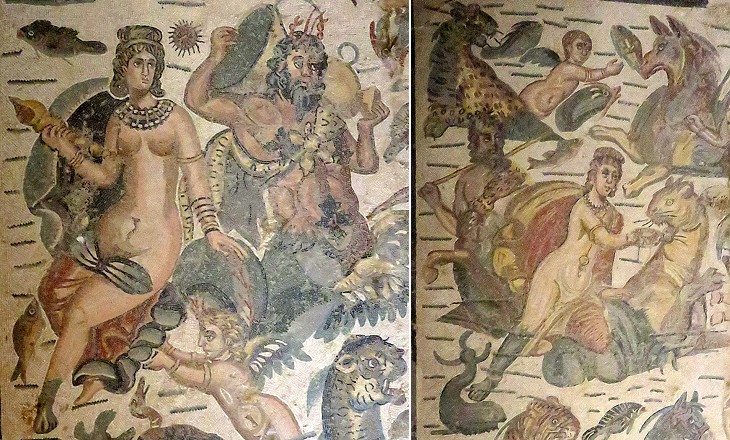 Hall of Arion Rescued by a Dolphin: Queens of the sea and sea-monsters

The myth of Arion provided the subject for a mosaic very similar to that in the frigidarium, but perhaps of a slightly lower quality. They are among the very few instances in which some adult nudity can be noticed at Villa del Casale. The mosaic with the myth of Arion was in a room of the private apartments, so it could be seen only by those who were strictly acquainted with the landlord. The Roman Empire was still solid at the time the villa was built, but the spirit of the ancient world was already fading away. 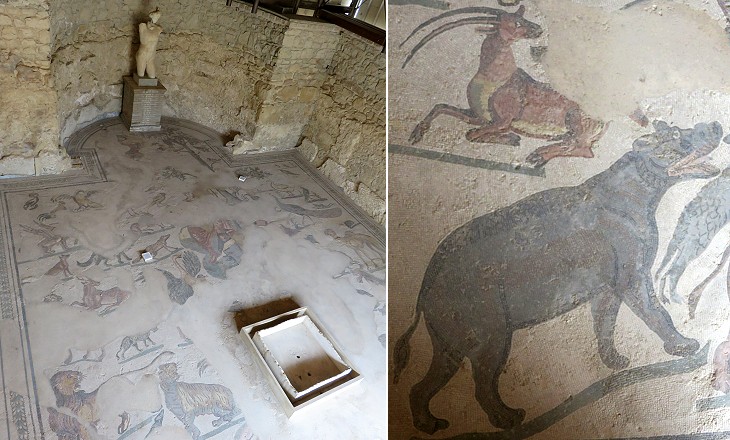 Hall of Orpheus Charming the Animals

This myth was very often chosen for mosaics (and for statues as well) because it gave an opportunity to depict many animals (45 in this mosaic). They were painted in isolation against a white background, something which can be noticed in a much later mosaic in Constantinople. The room with this mosaic was accessed from the Rectangular Peristyle only and it was presumably used to receive guests. A statue of Apollo stood in the niche. 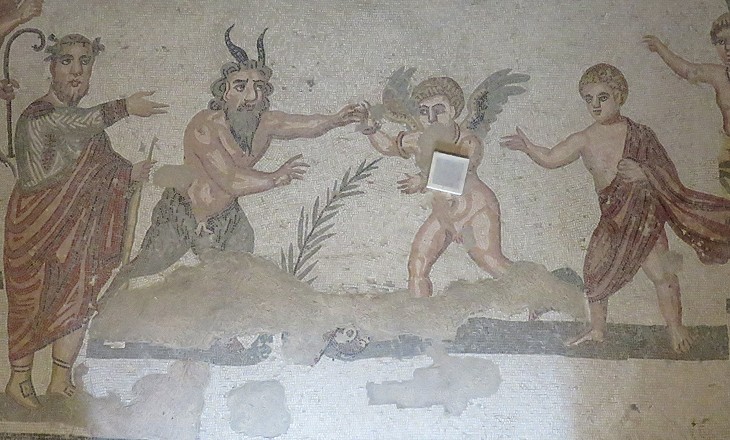 Room of Pan and Cupid (see a similar mosaic at Lyon)

The actions that are recorded of Pan are not many; the principal is that he challenged Cupid to wrestle; and was beaten by him. (..) With regard to the audacity of Pan in challenging Cupid to fight, it refers to this, that matter is not without a certain inclination and appetite to dissolve the world and fall back into the ancient chaos; but that the overswaying concord of things (which is represented by Cupid or Love) restrains its will and effort in that direction and reduces it to order. And therefore it is well for man and for the world that in that contest Pan was foiled.
Francis Bacon - Of the Wisdom of the Ancients - 1609
The enmity between Cupid and Pan can be noticed also in a famous statue of Venus found in Delos. 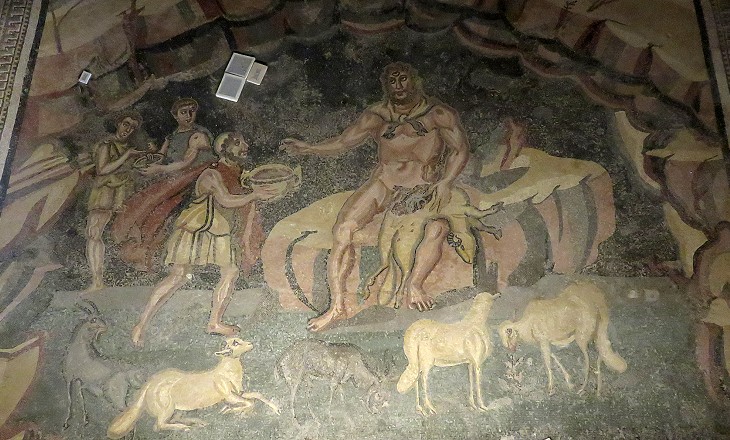 The travels of Ulysses offered artists in general many opportunities to show their talent. One of the finest mosaics of Thugga in Tunisia depicts Ulysses and the Sirens and the Villa of Emperor Tiberius at Sperlonga housed a colossal group of statues depicting the blinding of Polyphemus. The mosaic of Villa del Casale shows a scene immediately before the blinding of the giant who is portrayed with three eyes rather than one.
Hercules, another mythological hero who enjoyed great popularity, was portrayed in mosaics in the triclinium adjoining the Elliptical Peristyle which was being restored at the time of my visit.
The image used as background for this page shows the inscription Bonifatius in the Rectangular Peristyle, the only name which has been found at Villa del Casale and which most likely was added at a later time.

Move to see the mosaics showing life events or the buildings of the villa.