- Ragusa
(left) Temple to Hercules at Agrigento; (right) detail of the apse of Palermo's Cathedral 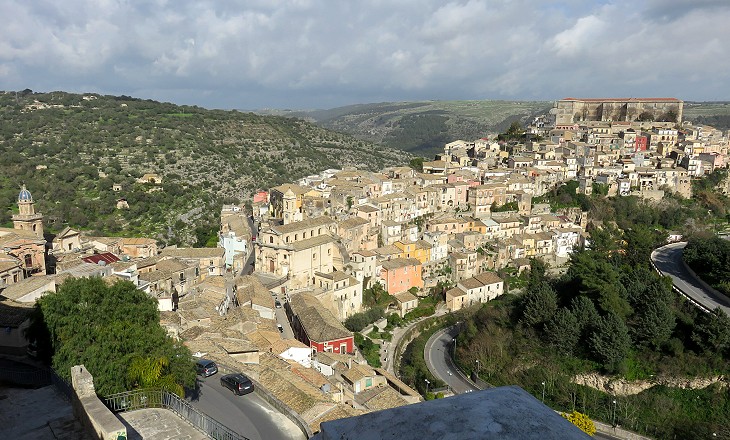 The road to Ragusa crosses a wild, mountainous, and rocky country, and is rugged and wretched in the extreme. The approach to Ragusa is striking, and the town itself, with its orange-coloured roofs piled one over the other on the verge of the cactus-hung precipice, is highly picturesque. This is a large town, of some 22,000 souls, covering a narrow and steep ridge between two ravines - a situation which is recognised by the antiquary as one likely to have been chosen by the early people of Italy for a city.
A Handbook for Travellers in Sicily - Murray - 1864 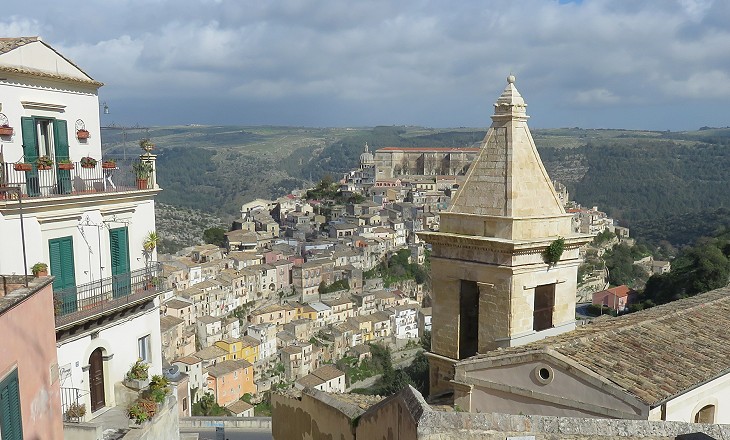 From the window of my apartment the appearance of the city was truly striking. A series of irregular mountains, covered half-way up with buildings; above, gardens of fruit trees, India figs, &c. and still higher naked rocks, presented a fanciful scene, resembling the Praesepia, which, in this country, are usually exhibited at the festival of Christmas. It is built on the declivity of an irregular mountain, which is intersected by numerous vallies, or ravines. Modica is of considerable extent, and though its population is now much diminished, it still contains twenty thousand souls. It is the capital of the Contea, which is endowed with great privileges.
Sir Richard Colt Hoare - A Classical Tour through Italy and Sicily - published in 1819. In 1790 Colt Hoare, unlike most travellers of his time, visited the southernmost part of Sicily on his route from Agrigento to Syracuse. He stopped in Modica, eight miles south of Ragusa, because it was the most important town of the district. His description of Modica could very well apply to Ragusa. 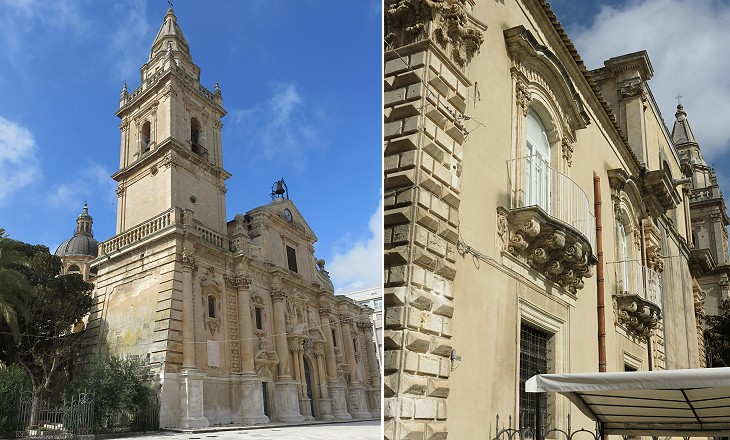 Today Ragusa is a town larger than Modica and since 1927 the capital of a province which includes the latter. In 1950 the Diocese of Ragusa was created; the church chosen to serve as the Cathedral is situated in Ragusa Superiore, a neighbourhood which was developed after the great earthquake which struck south-eastern Sicily in 1693. As suggested by its name, it stands on the flat top of a hill higher than that where the old town was situated. In 1922 the latter was renamed Ragusa Ibla on the assumption that it was built on the site of Hybla Heraia, an ancient Greek town.

Cathedral: detail of the portal with statues of St. John the Baptist to whom the church is dedicated, the Virgin Mary and St. John the Evangelist

A church dedicated to St. John the Baptist in the old town collapsed during the earthquake. It was decided to rebuild it in the new neighbourhood and the church was inaugurated in 1694. It soon became too small for the growing population of Ragusa Superiore and in 1718 it was decided to erect a very large church which was inaugurated in 1778, sixty years later. The original plan contemplated two bell towers, but eventually only one of them was built. The façade has a rich ornamentation, but it is not typical of the style which prevailed in the reconstruction of the town.

In front of Santa Maria delle Scale in the upper town, is a quaint old pulpit in the wall, worthy of notice. 1864 Murray Handbook
Until 1930 the fastest way to move between the two parts of the town was through some 300 steps. A church on the edge of Ragusa Superiore is named after them. It was destroyed by the earthquake, but some finely decorated architectural elements of it were placed on a wall of the new one. 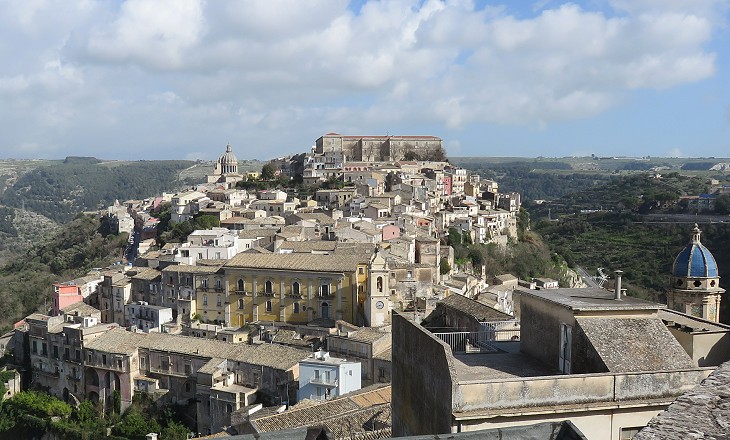 Another view of Ragusa Ibla from near S. Maria dell'Itria

The foundation of Ragusa was due to its very defensible position on a hill surrounded by ravines. We know that it was fortified by Byzantines, Arabs and Normans. In the XVIth century the castle was upgraded to the needs of cannon warfare. When in 1693 it was greatly damaged by the earthquake it had already lost its military importance and it was abandoned. In 1930 a huge building was erected on the site of the castle to house the offices of the Army for the newly created province of Ragusa. The town was almost entirely rebuilt after the earthquake, but it retains a rather medieval urban layout with winding uphill streets. 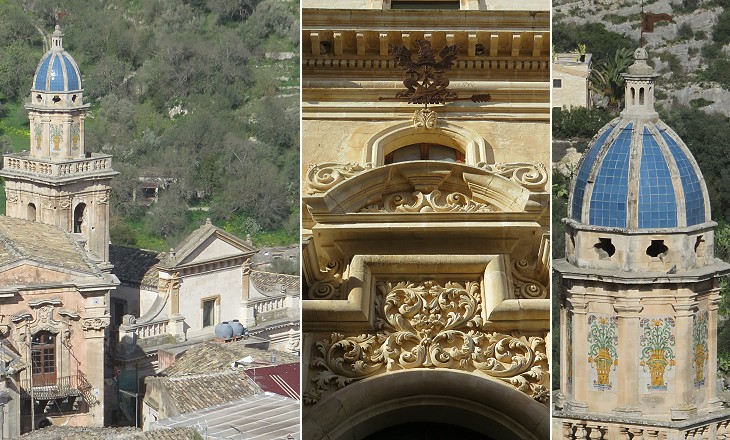 S. Maria dell'Itria or Odigitria (She who shows the way): (left) view from the street leading to Ragusa Ibla; (centre) detail of the portal; (right) tip of the bell tower

With the development of Ragusa Superiore the steps linking it with Ragusa Ibla became the main street of the new enlarged town. Notwithstanding the awkward location, some of the wealthiest families chose to build their palaces there. S. Maria dell'Itria which stood along the steps was not greatly damaged by the earthquake, but it was rebuilt; the façade was completed in 1740 and the bell tower in 1754. The ceramic tiles most likely came from Caltagirone a not so far away town which was renowned for them. They bring to mind domes in Palermo (e.g. S. Giuseppe dei Teatini) and the floor of the ballroom of Palazzo Conte Federico in the same city. 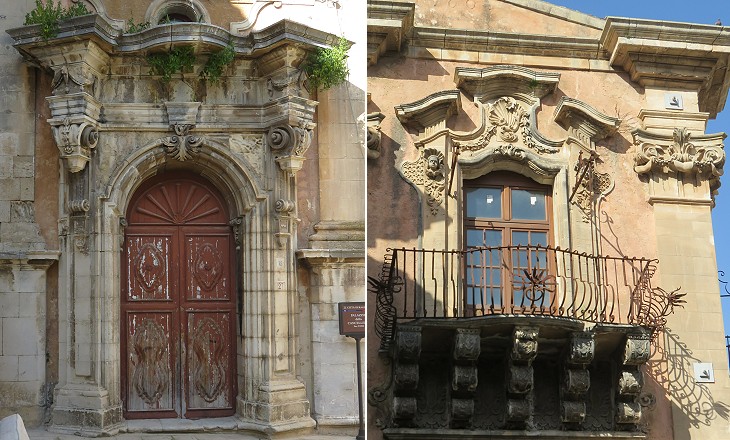 Because of the lack of space along the steps linking the two parts of the town, the palaces of the noble families could not exhibit the wealth of their landlords through imposing fronts. Money was therefore poured on the decoration of the small sections of the buildings which were visible from the outside. 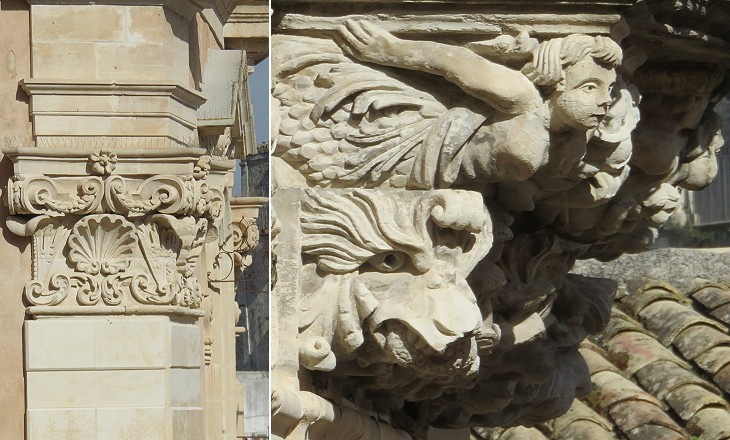 The streets are well paved, the houses neat and clean, with heavy balconies supported on corbels massive and grotesque. 1864 Murray Handbook 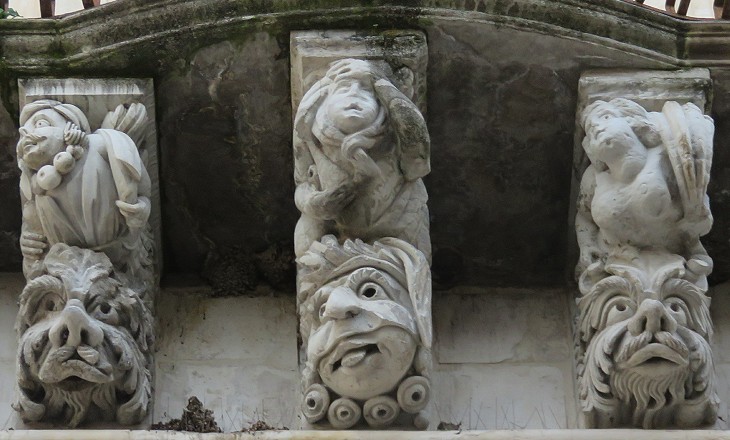 Architects and master masons who were involved in the reconstruction of Ragusa and other nearby towns could avail themselves of a fine and durable sandstone which could be easily cut. It was widely used for the decoration of balconies as at Palazzo Nicolaci in Noto. In some instances, as in Palazzo Cosentini and in Palazzo Lombardo Cafici in Palazzolo, the reliefs of the balconies are so bizarre that they recall the decoration of Villa Palagonia at Bagheria. In Rome laughing masks were often hidden in the decoration of buildings. 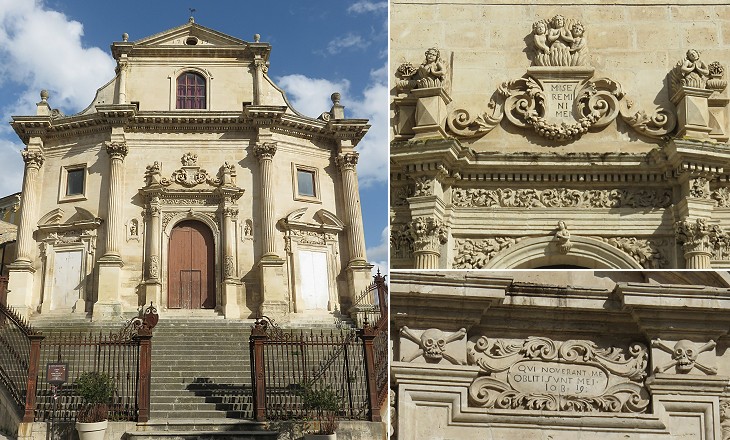 Chiesa delle Anime del Purgatorio: (left) façade; (right) details of the portal with the inscriptions "Miseremini mei" (Have pity on me) and "Qui noverant me obliti sunt mei" (They that knew me, have forgotten me) from the Book of Job

This church is placed at the entrance to Ragusa Ibla. Similar to S. Maria dell'Itria it was not destroyed by the earthquake, yet it was entirely rebuilt in 1740-1757. Prayers for the salvation of the dead and the shortening of their sufferings in Purgatory had great importance in the XVIIth and XVIIIth centuries and their effect was certified by religious authorities as one can read on marble tablets below sacred images and crosses in Rome and elsewhere. In Sicily many churches (e.g. S. Orsola in Palermo) were built to this purpose by pious confraternities. The souls in need of purification were portrayed as naked women emerging from flames, together with symbols of death which can be seen in Roman churches too. 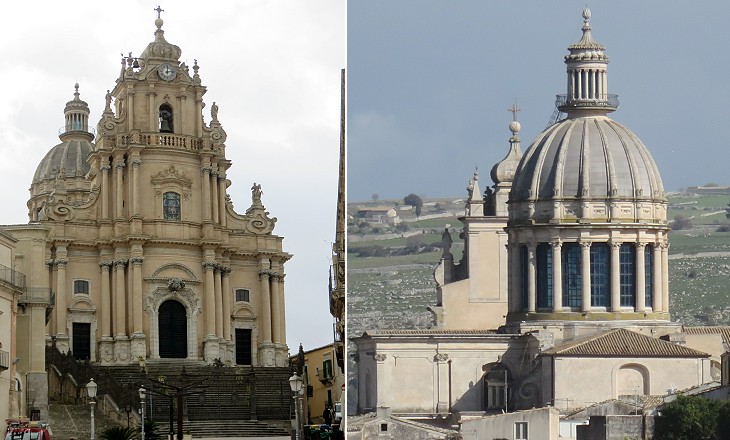 In the lower town is the domed Chiesa Matrice, a modern church of no interest; near it is another church of Sicilian Gothic. 1864 Murray Handbook
Most of the palaces and churches which were rebuilt after the earthquake were made by local master masons. In 1738 however Rosario Gagliardi, one of the architects who had been involved in the construction of new Noto, was entrusted with the design of S. Giorgio, the Chiesa Matrice, i.e. the main church of Ragusa Ibla. Its convex high façade, at the top of a flight of steps, is regarded as his masterpiece.
The dome was not designed by Gagliardi and it reflects the changes in architectural tastes which occurred at the end of the XVIIIth century. The size of its lantern calls to mind that designed by Stefano Ittar at S. Nicolò l'Arena in Catania.

S. Giuseppe: (left) façade; (right) interior; the sort of square "buttons" at the sides of the apse are screens of windows from which Benedictine nuns could attend Mass without being seen

Records about the architect of S. Giuseppe have not been found but it does resemble S. Giorgio and perhaps even more S. Domenico in Noto, another church designed by Gagliardi. S. Giorgio and S. Giuseppe do not have a separate tall bell tower, but a loggia for the bells above the façade; this measure increased the stability of the building and it was adopted also in Catania and Palazzolo Acreide. S. Giuseppe was the church of a Benedictine nunnery which similar to that of Noto could rely on substantial revenues and donations. 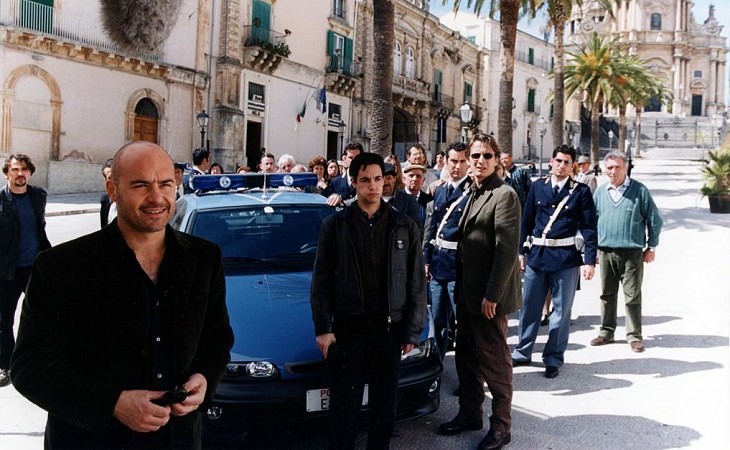 A still frame of a scene shot in the main square of Ragusa Ibla for the TV series "Il Commissario Montalbano". The Sicilian towns where the episodes take place are fictional, but many scenes were shot in Ragusa. The series began in 1999 and it made popular a region of Sicily which was unknown to most Italians

In 2002 UNESCO included The Late Baroque Towns of the Val di Noto (South-Eastern Sicily) in the World Heritage List with the following brief synthesis of their universal value: The Late Baroque Towns of the Val di Noto is comprised of components of eight towns located in south-eastern Sicily. These historic centres and urban environments reflect the great, post-seismic rebuilding achievement of the decades following the catastrophic earthquake of 1693, which ravaged towns across south-eastern Sicily. The rebuilding, restoration and reconstruction of these communities resulted in the creation of an exceptional group of towns, all reflecting the late Baroque architecture of the 17th century in all its forms and applications. The eight components of the property differ in size and represent a range of responses to the rebuilding needs. They include the entire old towns of Caltagirone, Noto and Ragusa; specific urban areas of Catania and Scicli; and isolated monuments in the historic town centres of Modica, Palazzolo Acreide and Militello Val di Catania. 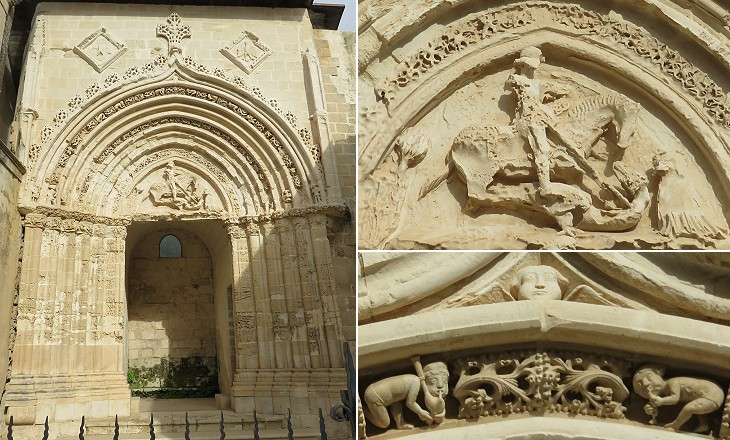 Portal of S. Giorgio Vecchio and details of its reliefs

S. Giorgio Vecchio is perhaps the other church of Sicilian Gothic mentioned in the 1864 Handbook. Its portal is the finest memory of medieval Ragusa and the only surviving part of the old church of S. Giorgio. Its design reflects the influence of Catalan Gothic architecture, but the reliefs in between the thin arches are rather uncommon in Sicily and they bring to mind patterns which were developed in the Italian peninsula e.g. in Ancona. The positioning of the square coats of arms above the portal is similar to that at Palazzo Abatellis in Palermo.

A number of churches were not entirely rebuilt and they still retain parts of their pre-earthquake aspect. 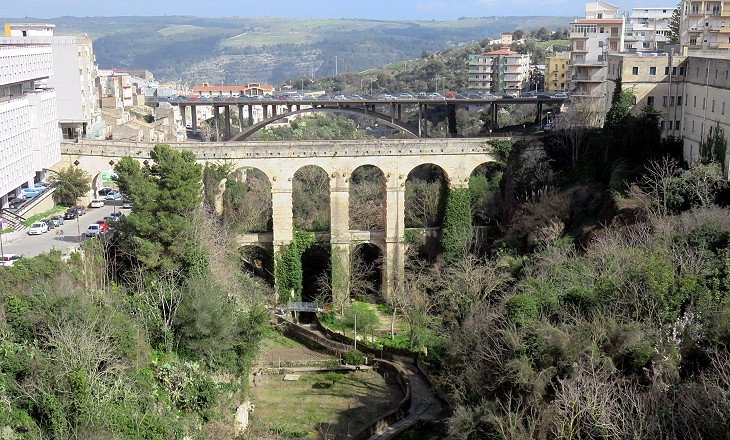 Eventually Ragusa Superiore was not large enough to house the growing population of the town and a new neighbourhood which houses the railway station was developed on a hill beyond a deep ravine.