You may wish to read an introduction to this section or a page on the main monuments of the town first. 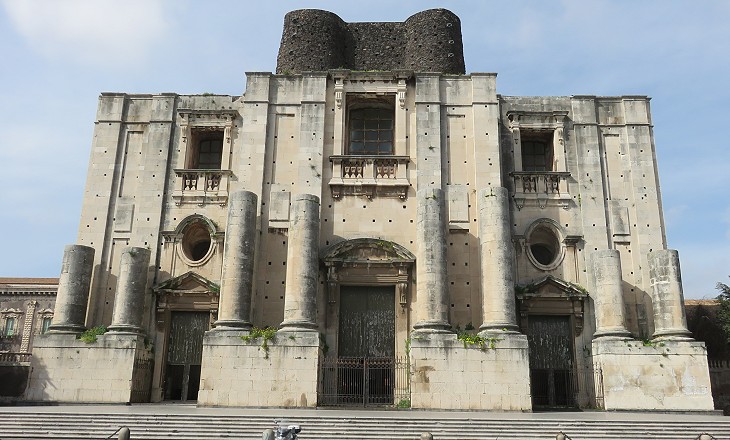 The church belonging to this convent if finished would be one of the finest in Europe, but as it is founded on the surface of the porous and brittle lava, part of the foundation has given way to the pressure of so huge a fabric and several of the large arches that were intended to form the different chapels have already fallen down. Only the west wing of the cross, not a fifth of the whole, is finished and even this alone makes a very fine church.
Patrick Brydone - A Tour through Sicily and Malta in 1770.
In 1578 the Benedictines completed the construction of a church adjoining their monastery in the north-western part of Catania. In 1669 the lava stream which slowly moved towards the town after an eruption of Mount Etna reached and destroyed the church. In 1687 the construction of a new building began, but it was suspended for thirty years after the 1693 earthquake. In 1755 the right aisle collapsed. 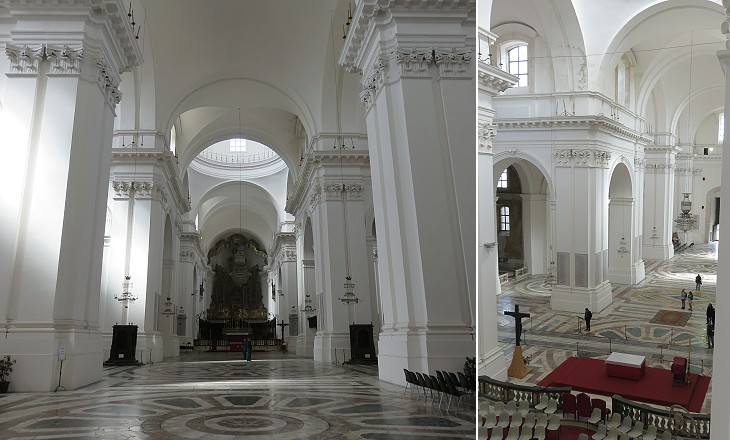 The church is a noble fabrick, notwithstanding several blameable things in the design; the aisles are too wide for the nave, and the altars are in a very vicious taste; the architect seems in them to have studied to deviate as much as possible from the real line of beauty. This is accounted the largest church in Sicily, though neither a porch nor cupola has been erected, from a doubt of the solidity of the foundations, which are no other than the bed of lava that ran out of Etna in 1669, and is supposed to be full of cavities.
Henry Swinburne - Travels in the Two Sicilies. 1777-1780
When Swinburne visited the church in 1778 the unfinished façade and the dome were yet to be built. He was most likely familiar with Johann Joachim Winckelmann's views on art which were published in 1764 and therefore he was very critical of Baroque and Rococo buildings. 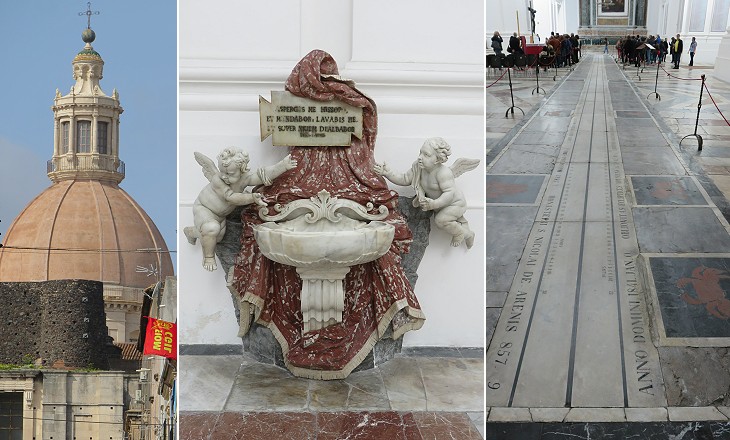 The dome was built in 1780 by Stefano Ittar, an architect from Poland who was very active in Catania where he designed also S. Placido; in origin the size of the church was aimed at competing with that of S. Pietro, but eventually it was decided to build a relatively small dome, although with an excessively large lantern. The holy water fonts are an imitation of those in the Roman basilica and the meridian line, a sort of sundial indicating the day of the year, brings to mind that at S. Maria degli Angeli in Rome. 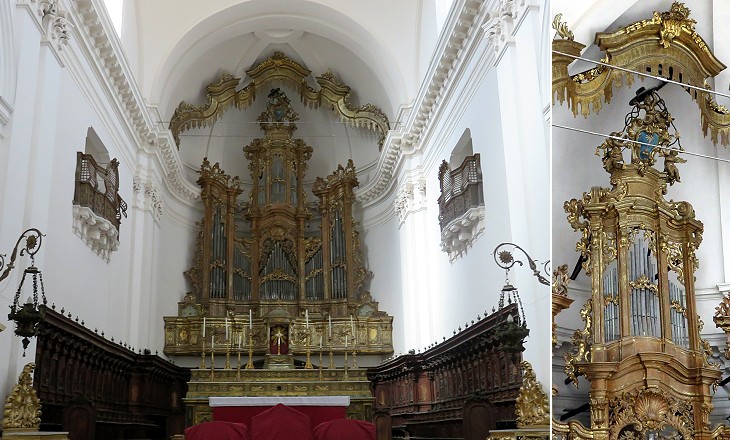 Catania Thursday May 3, 1787. The Abbè led us to the Benedictine Monastery, and took us to the cell of a brother of the order, whose reserved and melancholy expression (though he was not of more than the middle age) promised but little of cheerful conversation. He was, however, the skilful musician who alone could manage the enormous organ in the church of this monastery. As he rather guessed than waited to hear our request, so he complied with it in silence. We proceeded to the very spacious church, where, sitting down at the glorious instrument, he made its softest notes whisper through its remotest corners, or filled the whole of it with the crash of its loudest tones.
J. W. Goethe - Italian Journey - Translation by Charles Nisbet
Here they have the finest organ I ever heard even superior I think to that at Harlem. Brydone
It contains an organ, justly celebrated as one of the most remarkable in Europe; the variety of its notes, and its accurate imitation of various other musical instruments (including the human voice), is astonishing.
Sir Richard Colt Hoare - A Classical Tour through Italy and Sicily - published in 1819.
The construction of the organ lasted 12 years. It has 2916 pipes, 5 keyboards, 72 registers and 6 bellows. You may wish to see the choir loft at another Benedictine church of Catania or a page on the organs and choir lofts in the churches of Rome. 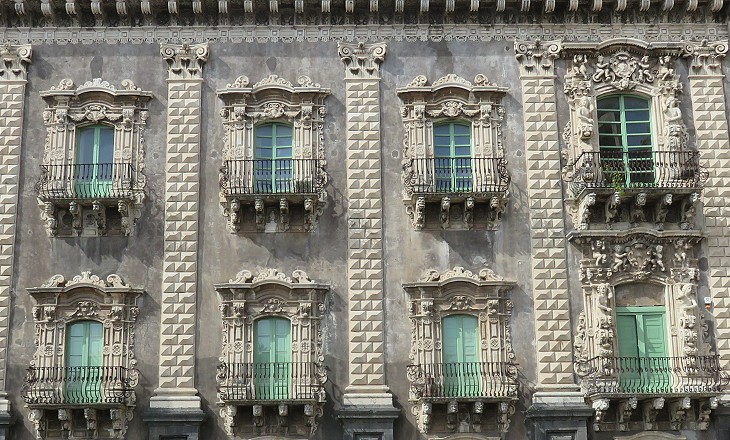 Monastero di San Nicolò l'Arena: façade (the image used as background for this page shows a detail of it)

This afternoon I walked out alone to examine the capricious forms and singular appearances that this destructive branch of lava has assumed in laying waste the country. I had not gone far when I spied a magnificent building at some distance which seemed to stand on the highest part of it. My curiosity led me on as I had heard no mention of any palace on this side of the city. On entering the great gate my surprise was a good deal increased on observing a façade almost equal to that of Versailles, a noble staircase of white marble and every thing that announced a royal magnificence. I had never heard that the kings of Sicily had a palace at Catania and yet I could not account for what I saw in any other way. I thought the vast front before me had been the whole of the palace, but conceive my amazement when, on turning the corner, I found another front of equal greatness and discovered that what I had seen was only one side of a square. I was no longer in doubt well knowing that the Church alone could be mistress of such magnificence. I hastened home to communicate this discovery to my friends when I found the Canonico Recupero already with them. He abused me exceedingly for presuming to go out without our Cicerone and declared he had never been so much disappointed in his life as he had come on purpose to carry us there and to enjoy our surprise and astonishment. He then told us that it was no other than a convent of fat Benedictine monks who were determined to make sure of a paradise at least in this world if not in the other. He added that they were worth about 15 000 l a year, an immense sum indeed for this country. Brydone
We next visited the Benedictine convent of St. Nicholas, one of the largest I ever saw, belonging either to that, or any other religious order. Every part has been rebuilt since the earthquake of 1693. The principal front is overcharged with ornaments, and nothing in architecture can have a more disagreeable effect than the decorations of the windows. Swinburne
The ornamentation of the windows is very similar to that of Palazzo Biscari and it shows the influence of works by José Benito de Churriguera (1665-1725), a Spanish sculptor and architect, known for the exuberant decoration of his buildings and altarpieces. 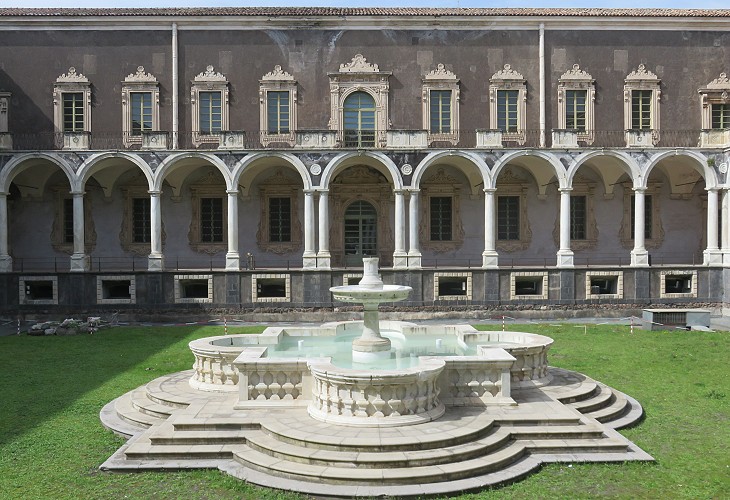 The monastery was founded in the XVIth century and named after another Benedictine monastery at Nicolosi, a small town at the foot of Mount Etna which was surrounded by (a)rena rossa, red volcanic earth. It was built on the site of ancient Roman houses and it was not totally destroyed by lava in 1669 because a purpose-built wall changed the direction of the fire stream. Eventually new wings and a garden (it opens in another window) were built on the solidified lava.
The Benedictine convent is highly deserving the notice of every traveller. The vast extent and general neatness of the buildings are very striking. Colt Hoare
The courtyards and in general the monastery are characterized by the use of a white stone for the design of the architectural elements and of a greyish paint which contained volcanic sand. The effect, when not marred by poor maintenance and dirt, is very fine. 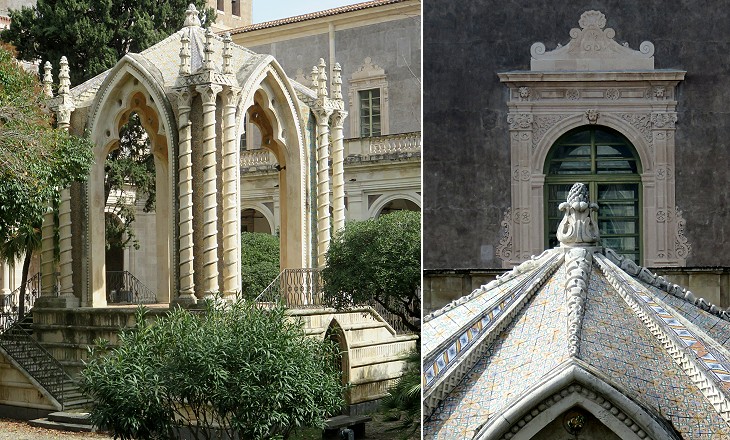 We went with Recupero to pay our respects to these sons of humility, temperance and mortification and we must say they received and entertained us with great civility and politeness and even without ostentation. Brydone
Had Brydone visited the monastery in 1841 he would have been offered a cup of coffee in a neo-Gothic open kiosk designed in 1841 by Mario Musumeci, where the monks relaxed and met with visitors and relatives. 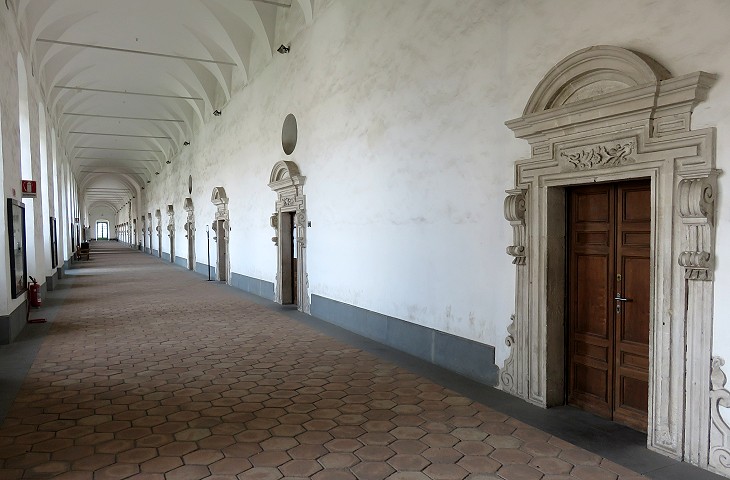 The dormitories and galleries are so long that the perspective view of them seems absolutely to terminate in a point of light. Swinburne
The monks belonged to the wealthiest families of Catania, similar to what applied to Benedictine nuns at Noto. Benedictine abbots and abbesses had some discretion in the interpretation of the rule of St. Benedict. Individual cells were spacious, family furniture could be brought in and the chores were done by two servants per each monk.
In the Kingdom of Sicily, similar to what occurred in Spain and other countries, the right of succession to the properties associated with a title of nobility belonged to the oldest son. The other male children had the option of pursuing either a military or an ecclesiastical career; because the opportunities for such careers were limited and required skills and a proper education, many entered a monastery and spent an idle life there. This law was abolished in 1866 and in that same year the monastery was confiscated and the monks had to leave it. 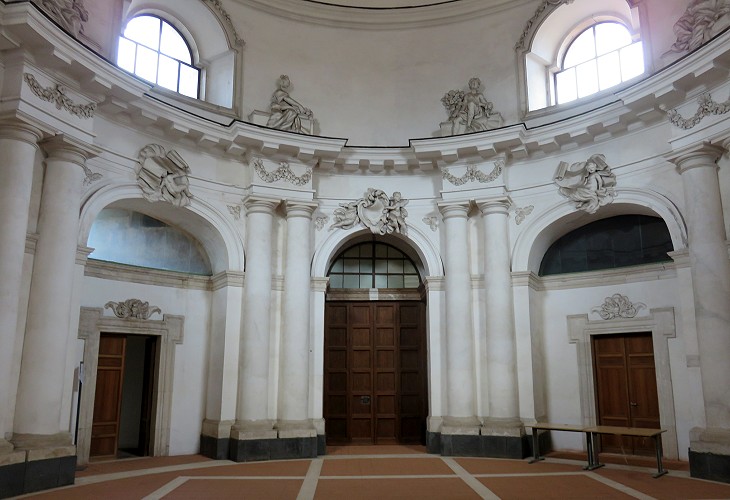 Sicily is the land of good eating. I will venture to say there is no country in the universe where you can get a better dinner, and better cooked. Of the Benedictine monks at Catania, so renowned for their table, I shall have to speak. (..) When the Prince reached the top of the stairs, the whole community had assembled. There were about thirty monks, not one pleasant to look at. They all wore their white cowls drawn over their heads, except the superior, who, uncovered, led the way into a well-lit refectory, where a long table was laid for supper. (..) The Prince ate both his supper and his quails with the appetite of a long-fasting man, helping himself at the same time to copious draughts of Marsala, a wine to which he was now introduced for the first time. (..) After the Marsala, came Isola and Muscat; the Prince drank of all these, until he fell into a half-sleep.
Frances Minto Elliot - The Diary of an Idle Woman in Sicily - 1871. The writer spent most of her life in Italy and she was buried in the Protestant Cemetery of Rome.

Monastero di San Nicolò l'Arena: view over the dome of the Cathedral and S. Francesco

Because of its commanding position the monastery had a fine view over Catania and the sea. It is likely that many young monks who left their cells in 1866 and were given succession rights to large fortunes did not miss this view and were happy to return to secular life, marry and have children. 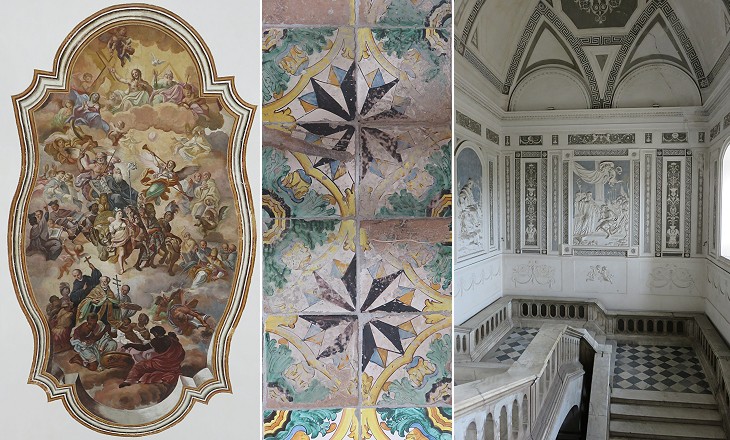 Monastero di San Nicolò l'Arena: details of a ceiling, a floor and a staircase

Afer 1866 the monastery was split into separate units which housed schools, barracks, a museum, a library and other facilities. In 1977 it was acquired by the University of Catania which in 1984 undertook a large project aimed at recovering the original decoration and layout of the monastery and at making it a suitable facility for the students. The project was developed by Giancarlo de Carlo and the very satisfactory results he achieved were confirmed in 2002 when the building was included in the UNESCO World Heritage List as one of the key monuments of The Late Baroque Towns of the Val di Noto (South-eastern Sicily).

Other pages on Catania: Ancient Monuments, Around Piazza del Duomo and Via dei Crociferi.