- Palazzolo Acreide
(left) Temple to Hercules at Agrigento; (right) detail of the apse of Palermo's Cathedral

You may wish to read an introduction to this section or a page on Akrai, an ancient Greek town on a hill near Palazzolo first. 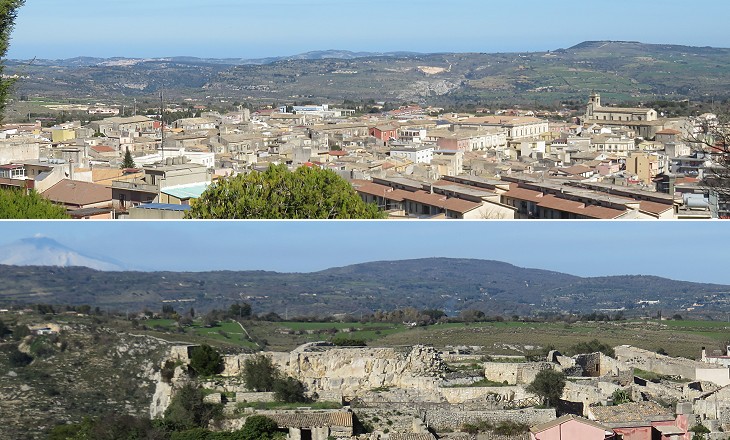 (above) View of Palazzolo; (below) site of an abandoned Norman castle and Mount Etna to the far left

Wednesday, June 23, 1790. The situation of Palazzolo is lofty (2,200 ft); and it is celebrated for its magazine of snow, from which the neighbouring cities of Noto, Syracuse, &c. are supplied. To this Silius Italicus alludes (in his description of the Second Punic War): "e tumulis glacialibus Acrae Defuerunt" (the men of Akrai/Acrae, descended from their icy heights). (..) The mountains round Palazzolo, to the left of my road, were well cultivated, and clothed with corn and vineyards.
Sir Richard Colt Hoare - A Classical Tour through Italy and Sicily - published in 1819.
Akrai was razed to the ground by the Arabs in ca 878 and the site was abandoned. In the XIIth century the Normans fortified the ruin of a palatium, a Roman building which stood on high ground in the valley below Akrai, from which the modern town and its name originated. Acreide was added in 1862 to distinguish it from other Italian towns. 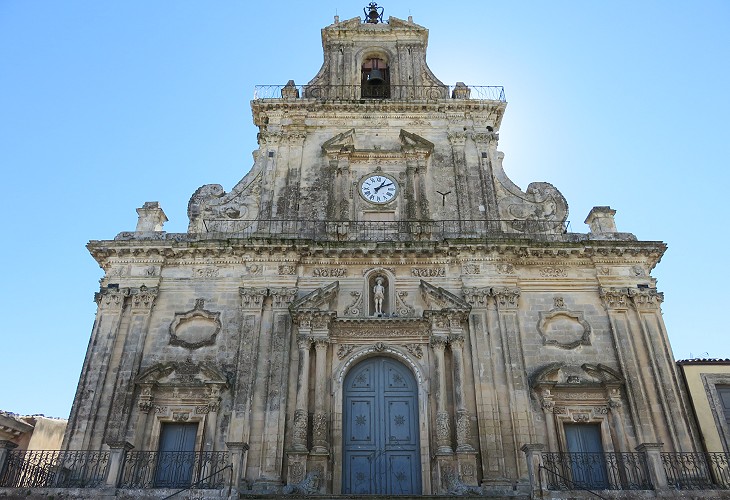 The town is quite modern, having been built since the earthquake of 1693, which destroyed the buildings that then occupied the site. It is intersected by one long dirty street of mean houses; the churches possess no beauty, and contain no works of art.
A Handbook for Travellers in Sicily - Murray - 1864
Views on art matters change and in 2002 S. Sebastiano and S. Paolo, two churches of Palazzolo, were included by UNESCO in their World Heritage List as elements of The Late Baroque Towns of the Val di Noto (South-Eastern Sicily).
The lower part of the façade of S. Sebastiano was designed by Mario Diamanti, a master mason from Syracuse. The upper section was completed in 1768 and it reflects a pattern which was developed in 1738 by Rosario Gagliardi for S. Giorgio at Ragusa. Many of the churches built after the earthquake did not have bell towers, but a loggia for the bells at the top of the façade for safety reasons. This architectural device can be noticed also in churches of Catania. 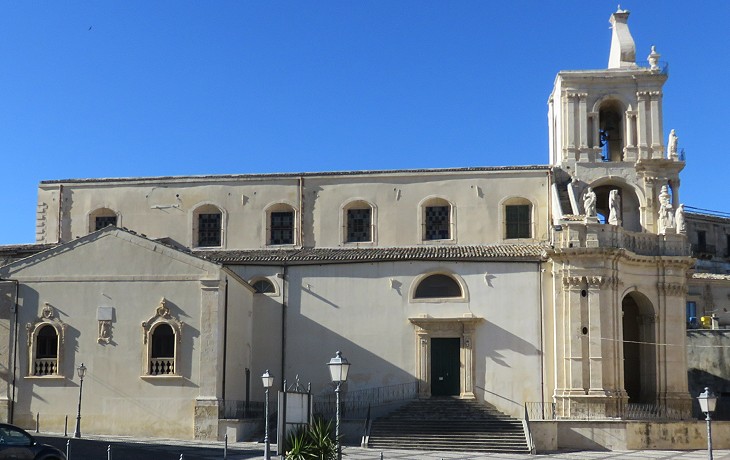 S. Paolo: side view which shows that the façade is not indicative of the size of the church

The two churches which UNESCO united in their assessment are placed at the opposite ends of the town and not by chance because a legal war was fought by the confraternities which built them. An image of Madonna Odigitria (She who shows the way) was worshipped at S. Sebastiano and Madonna Odigitria was the patron saint of Palazzolo. In July 1688 the members of the Confraternity of S. Paolo made a petition to Juan Francisco Pacheco, Duke of Uzeda, Viceroy of Sicily to have St. Paul proclaimed patron saint of the town. The Viceroy called a popular referendum on the matter and its outcome supported the change. The Confraternity of S. Sebastiano appealed against the decision, in order not to lose the revenues from the organization of the yearly festival, but the Viceroy confirmed the change, which in 1690 was endorsed by the Sacred Congregation of Rites, a department of the Roman Curia. 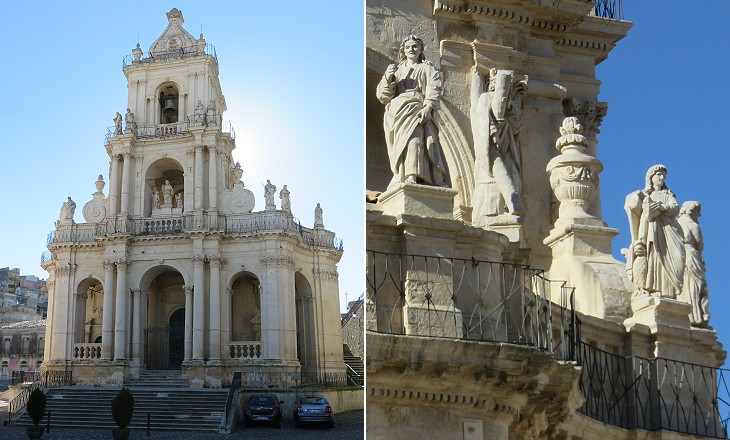 S. Paolo: (left) façade; (right) statues of the Apostles (see a page on the statues on top of the churches of Rome)

The earthquake of 1693 was not attributed to the change of the patron saint and the Confraternity of S. Paolo endeavoured to have a new grand church. Similar to S. Sebastiano it was rebuilt in the 1720s, but the façade was completed in the second half of the century. Some sources indicate Vincenzo Sinatra (1707-1765) as its designer. This architect had a role in the construction of new Noto and actually the arches of the imposing portico resemble those of Palazzo Ducezio, a known work by Sinatra. 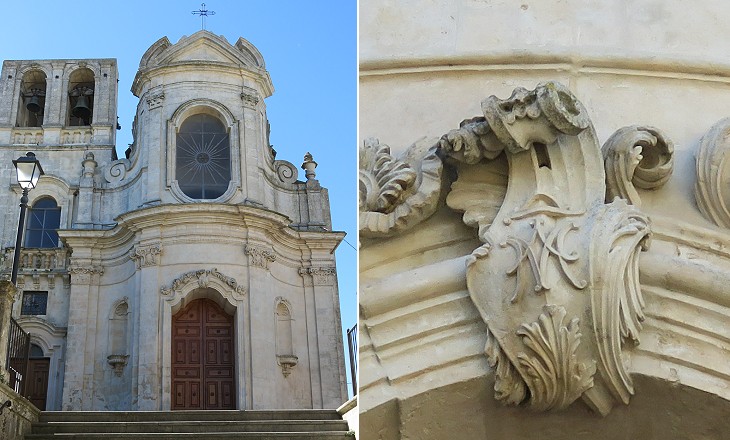 (left) Chiesa dell'Immacolata or dell'Assunta; (right) monogram for Mary on the portal

I lodged at the convent of the Padri Osservanti (one of the three Franciscan Orders), situated immediately under Acre Monte. Colt Hoare
The convent is located almost outside the town in line with the general custom for Franciscan churches; in origin it stood in an even more remote site up the hill of Akrai. The adjoining small church has an interesting façade of which we do not know the architect; it has a Roman appearance with a convex façade and a large window which bring to mind S. Croce in Gerusalemme, but its design was likely influenced by a Franciscan church at Syracuse. 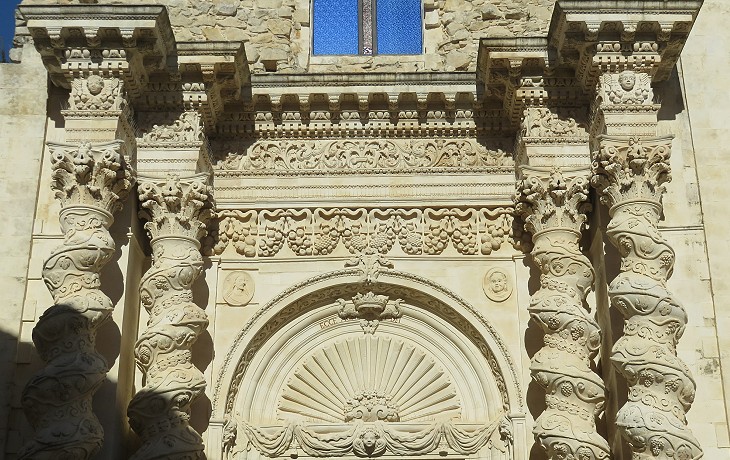 Annunziata: detail of the portal

The façade of this church was never completed so we do not know how this portal would have fit into it. Its very elaborate decoration is unusual in the post-earthquake reconstruction of South-eastern Sicily. It was designed by Giuseppe Ferrara, a local architect, and it is clearly based on the columns of the baldachin of S. Pietro, but even more on those which embellished the new façade of the Cathedral of Syracuse. Galleria Regionale di Palazzo Bellomo at Syracuse (see other exhibits): The Annunciation by Antonello da Messina from the church of Palazzolo; you may wish to see the earlier/Greek Orthodox depiction of the event at La Martorana in Palermo

This beautiful painting embellished the church until 1906 when it was moved to Syracuse to be restored and better protected by decay. It was attributed to Antonello da Messina in 1902 when a document was found which associated it with the painter. Unfortunately, during the centuries it was housed in the church, parts of the paint had fallen from the wood support and they had been poorly replaced. It is dated 1474; two years later Antonello painted a very innovative Annunciation in which only Mary is portrayed. 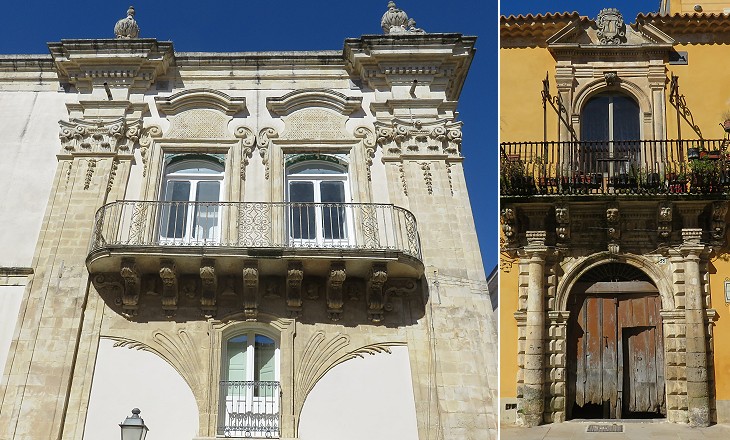 The only object of interest within the town is the Museum of the Baron Judica. That learned antiquary excavated for many years among the ruins of Acre, and in its necropolis; and the collection of relics he formed has, since his death in 1835, been in great measure dispersed; but a few articles are still preserved in his palace, which is in the main street. 1864 Murray Handbook
Today a small museum at Palazzolo is dedicated to Baron Gabriele Judica and it displays some exhibits from his collection. Architects and master masons who were involved in the reconstruction of South-eastern Sicily could avail themselves of a fine and durable sandstone which could be easily cut. It was widely used for the decoration of balconies as at Palazzo Nicolaci in Noto. 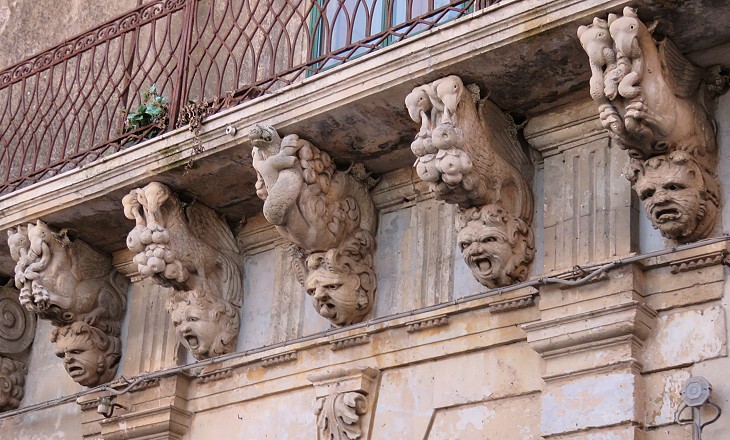 In some instances, as at Palazzo Cosentini in Ragusa and at Palazzo Lombardo Cafici in Palazzolo, the reliefs of the balconies are so bizarre that they bring to mind the decoration of Villa Palagonia at Bagheria.