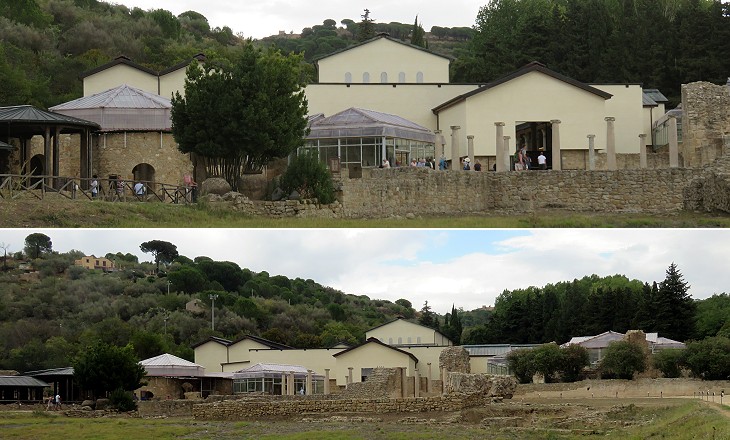 (above) View of the baths (left) and of the main building (right); (below) larger view which includes the Elliptical Peristyle (far right) and shows the low position of the complex

The Villa Romana del Casale is a Late Roman Villa (or Palace), dating from the late 3rd and early 4th century AD. What makes it unique among other surviving Roman villas are its floors, that are covered almost completely with well preserved (and coloured) mosaics. There are over 50 rooms full of them, in total ca. 3500 square meters. From the UNESCO World Heritage List website. 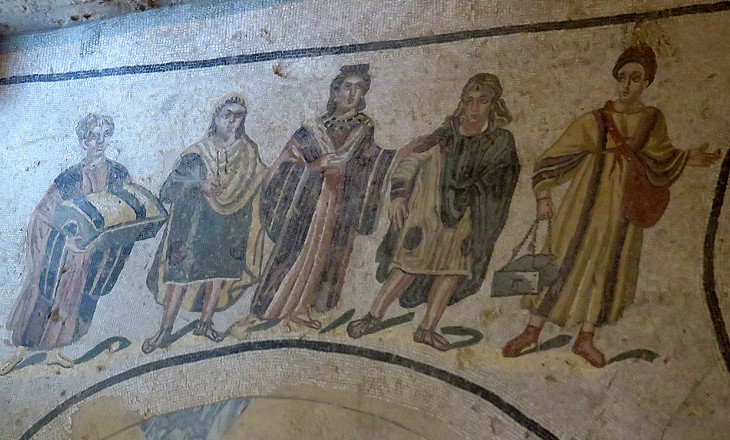 Mosaic in a room adjoining the Rectangular Peristyle and leading to the Baths which is assumed to portray Eutropia, wife of Emperor Maximian with her two children Fausta and Maxentius (note the symbolic depiction of shadows which shows up in many other mosaics and also in those found in Tunisia)

The site of a large Roman villa in the centre of Sicily at some 700 meters above sea level was identified in the XIXth century, but systematic excavations were carried out only after 1929. The many mosaics which embellished the villa were easily dated owing to their style and subjects, but the almost total lack of inscriptions, either in the mosaics or in the buildings, did not provide clear references to the landlord of the villa. He is generally believed to have been a member of the Roman senatorial class having links with Emperor Maximian, perhaps Gaius Caeionius Rufius Volusianus, who was governor of the Province of Africa in 305 and Praefectus Urbi in 310. 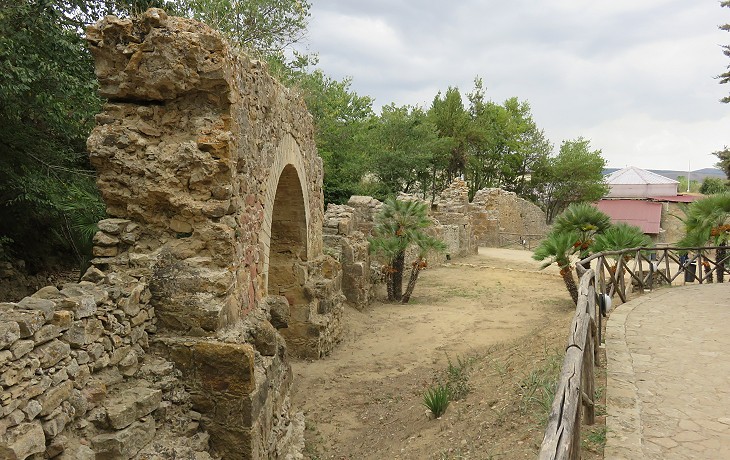 The villa was the residence of the owner of a latifundum, a large estate which archaeologists suggest was Philosophiana, a location mentioned in a description of the road between Catania and Agrigento. The complex of buildings must have included workshops, lodgings for servants and slaves, stables, etc. which are yet to be unearthed. Two aqueducts supplied it with water. That shown above ended at the baths, the other one reached a fountain in the Rectangular Peristyle and from there a latrine outside the main building.
The landlord must have been very confident about the security of his residence because he chose to build it in a sort of hole surrounded by low hills. It is likely that his real estate spread across a vast territory and was manned by thousands of farmers on whose loyalty he relied. 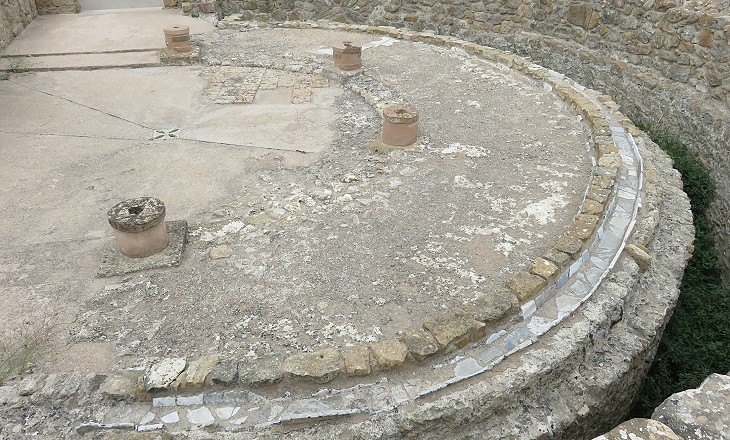 Latrine opposite the Baths

This large latrine is located near the courtyard which led to the entrance to the main building. Because two other latrines have been identified near the baths and behind the residential apartments, it is likely that this latrine was used by clientes (people who had obligations towards the landlord) and guests. This raises the question of whom these people were and why they came to this place. The villa was remote from the sea and the major towns. 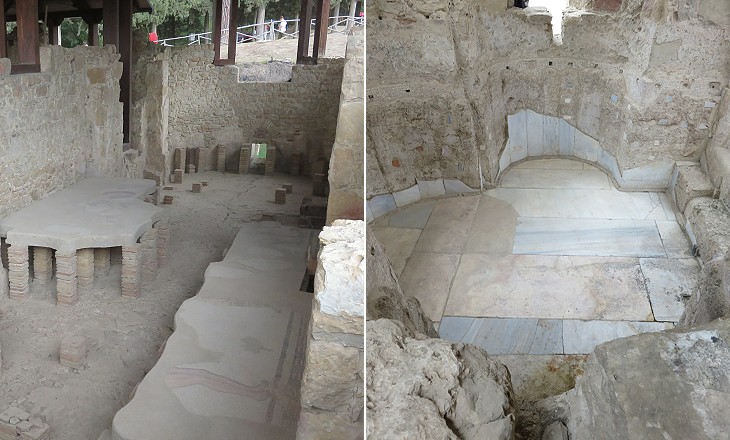 The size, decoration and design of the baths indicate that they were meant for a relatively large number of people. They were accessed from the main building which suggests they were used only by the landlord, his close assistants and his guests. There were three hot rooms which had separate heating systems so that temperatures could vary. One of them was a laconicum, a dry sweating room. 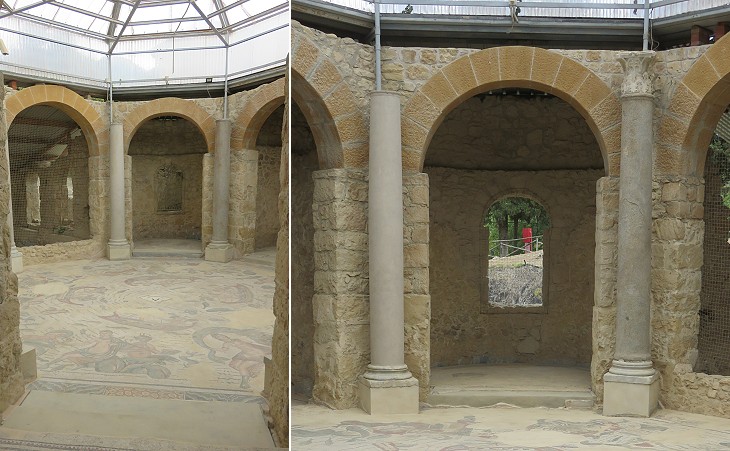 Baths: "frigidarium" (details of the mosaic are shown in another page)

The design of the cold room was not dictated by heating requirements and that at Villa del Casale was an octagonal room with granite columns and marble capitals which had a purely decorative purpose; they were placed at the sides of niches or passages to other sections of the baths. The niches might have been used for placing clothes. Usually Roman baths were embellished with statues, but archaeologists did not find them here.
You may wish to see a page with quotations from Seneca's Letters about a day at the baths. 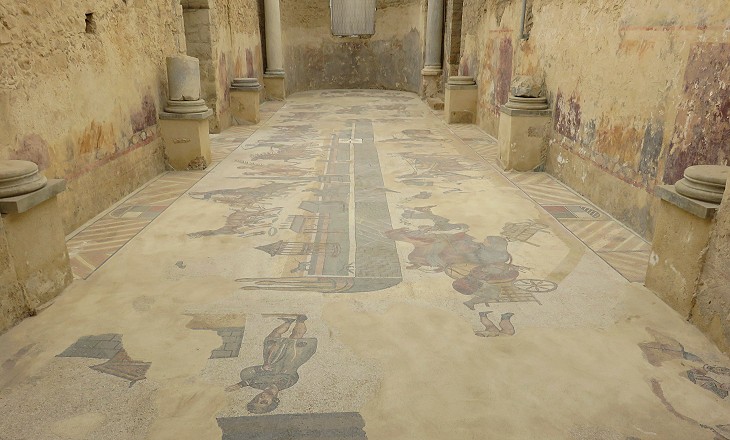 Palaestra (details of the mosaic are shown in another page)

In generall the space for exercising which adjoined a bath establishment had the aspect of an open courtyard as at Terme di Nettuno at Ostia, with maybe a small covered section. This closed palaestra, together with the fact that in many mosaics people are portrayed as wearing heavy clothes, suggests that perhaps the climate had changed from the so called Roman Warm Period, a long period of warm weather. It is possible however that this highly decorated hall which was easily accessed from the main building was not utilized for exercising. The subject of its mosaic, a chariot race, is not pertinent to its assumed use. 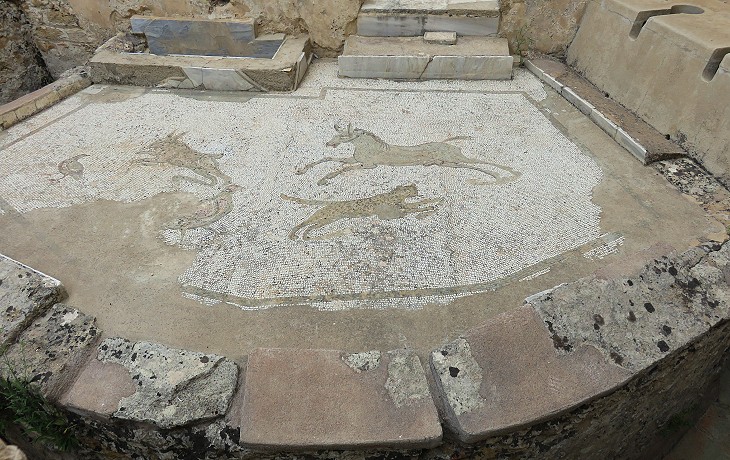 Latrine between the Palaestra and the Rectangular Peristyle

This small latrine was reserved to those who had access to the main building and the baths. It has the typical features of Roman latrines and in particular of those near the Forum of Ostia. It was decorated with marbles and a mosaic showing five animals, a recurring theme at Villa del Casale. Latrines were not regarded as second class elements of a Roman building and their decoration added prestige to it (you may wish to see the latrine of the baths of Sabratha in Libya). 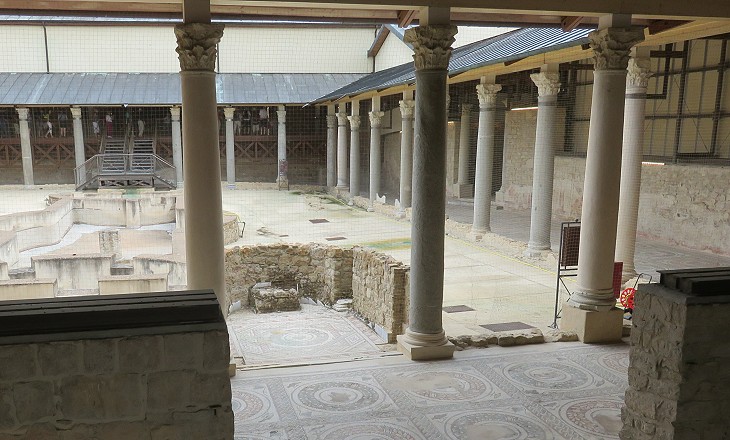 Rectangular Peristyle (details of the mosaic are shown in another page)

This peristyle (longer than wide) is embellished by some forty granite columns with marble Corinthian capitals. The columns have not the same height, so they most likely came from buildings in other locations (it has been suggested they might have been taken from the theatre of Taormina). It had a large fountain at its centre and it had rooms/halls on three sides. Those for receiving visitors and guests were located along the side opposite the entrance. A small niche between two columns housed a lararium, an altar dedicated to the household gods.
Villa del Casale was built at a turning stage from a religious point of view; the members of the Roman Senatorial class, to which the first landlord is assumed to have belonged, did not embrace Christianity until the end of the IVth century. In the Vth century the Vandals first raided and then conquered Sicily. They most likely put an end to the villa being utilized as the residence of a rich landowner. Archaeologists did not find evidence of mosaics having Christian symbols or subjects. 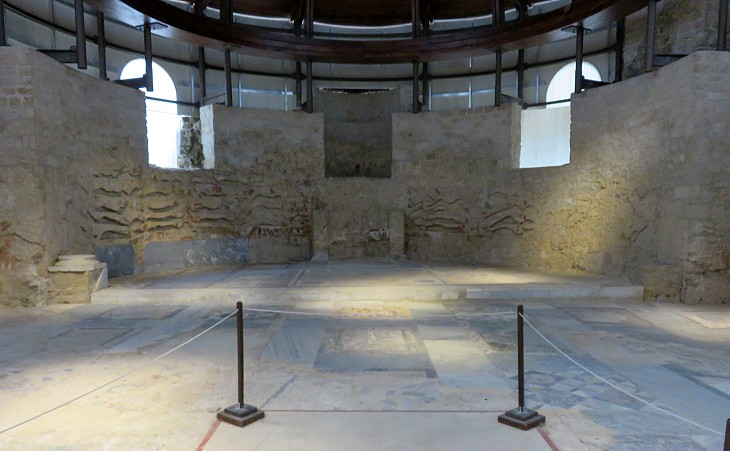 The most important room of the villa had the layout of a basilica, i.e. a long rectangular hall with an apse at its end. Its floor was decorated with opus sectile, a marble inlay which was more expensive than mosaics (the image used as background for this page shows a detail).
Here the landlord had official meetings and ceremonies; he might have administered justice to those who lived in his latifundum. You may wish to see the decoration of Domus dell'Opus Sectile at Ostia which is dated IVth century, approximately similar to Villa del Casale. 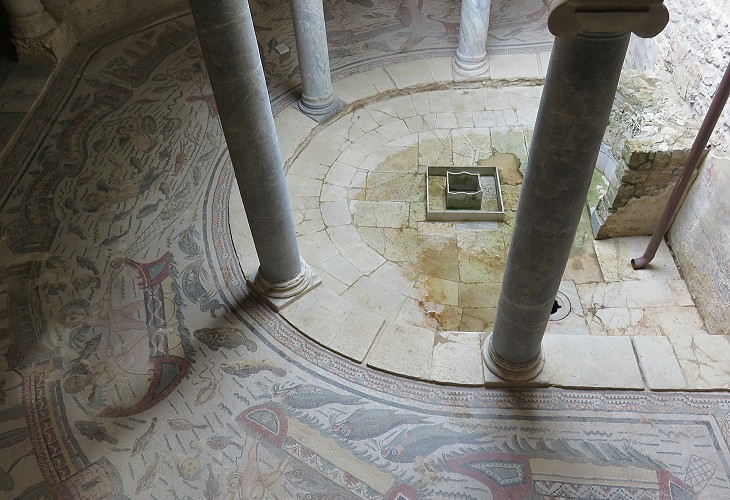 This hall with a small portico and a fountain was the only entrance room to a large apartment in the main building. Unlike the Rectangular Peristyle it was decorated with coloured columns and Ionian capitals. 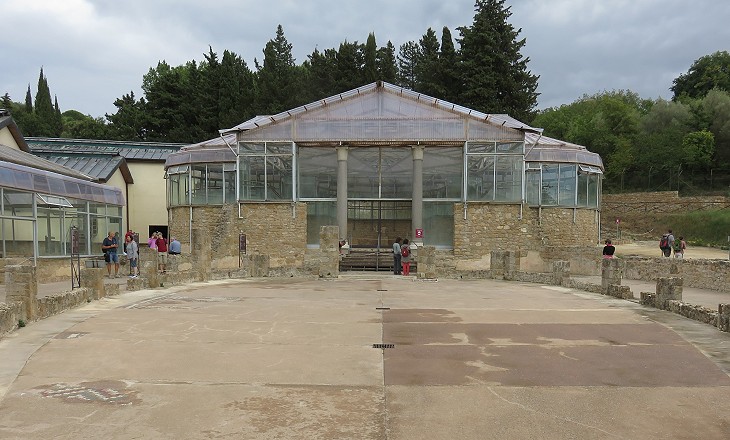 Elliptical Peristyle (details of the mosaic are shown in another page)

It is generally believed that Villa del Casale was built in one go, but perhaps the elliptical peristyle which led to a large triclinium (dining room) was an afterthought which was added to the original plan. The triclinium was likely meant to house formal banquets which could not take place in the halls adjoining the Rectangular Peristyle and also to entertain guests off the residential parts of the villa (the Basilica was flanked by private apartments).

Move to see the mosaics having a geometric pattern or a mythological subject or those showing life events.