You may wish to read an introduction to this section or a page on Ancient Taormina first. 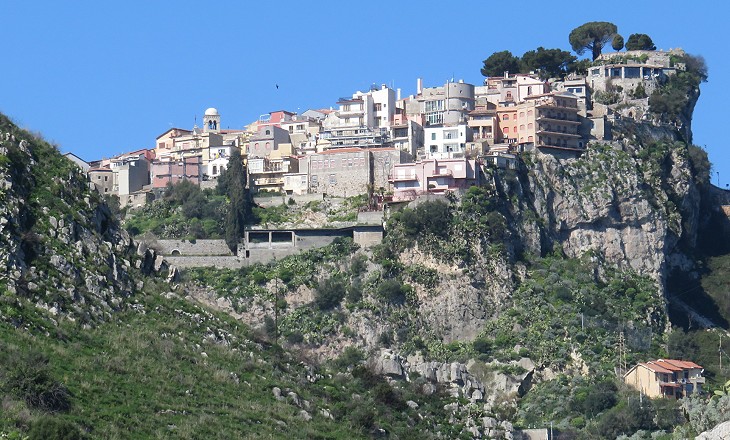 Castelmola seen from the Greek Theatre of Taormina

The road from Messina to this place is extremely romantic. It lies the whole way along the coast, and commands the view of Calabria, and the south part of the Straits. (..) The view on the right hand is confined by high mountains, on the very summits of which they have built several considerable towns and villages, which with their churches and steeples make a very picturesque appearance. They have chosen this elevated situation, I suppose, with a double view; to protect them from their enemies, and from the violent heat of the climate.
Patrick Brydone - A Tour through Sicily and Malta in 1770
Taormina is a poor town built on a narrow level above a precipice, and overhung by immense masses of rock where the village of Mola stands, in one of the boldest situations imaginable.
Henry Swinburne - Travels in the Two Sicilies. 1777-1780 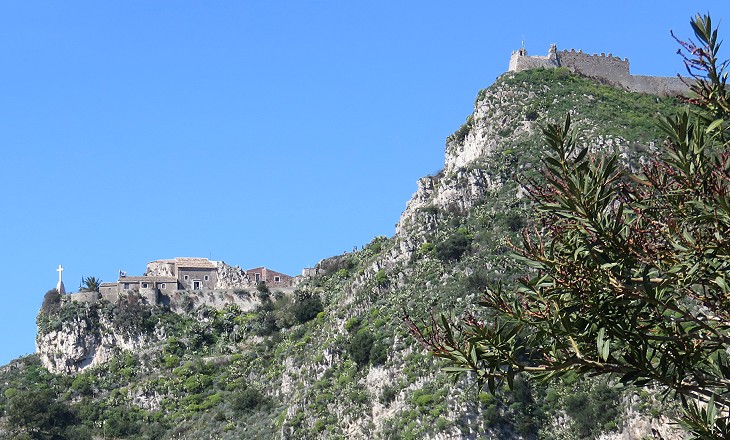 Brydone thought that maybe Castelmola and other small towns near Taormina were built on high ground also to enjoy cooler weather, but the key reason for their location was that wars plagued Sicily for centuries and in addition these towns were subject to raids by pirates and corsairs even during periods of peace. Taormina was the last Byzantine stronghold in the island to fall to the Arabs in 902. The castle which stands on the lower acropolis of the ancient town (the upper one being near Castelmola) was most likely built by the Arabs. It was conquered by the Normans in 1079. It can be reached from the town through steep flights of steps which lead first to Madonna della Rocca, a small shrine, and then to the castle. 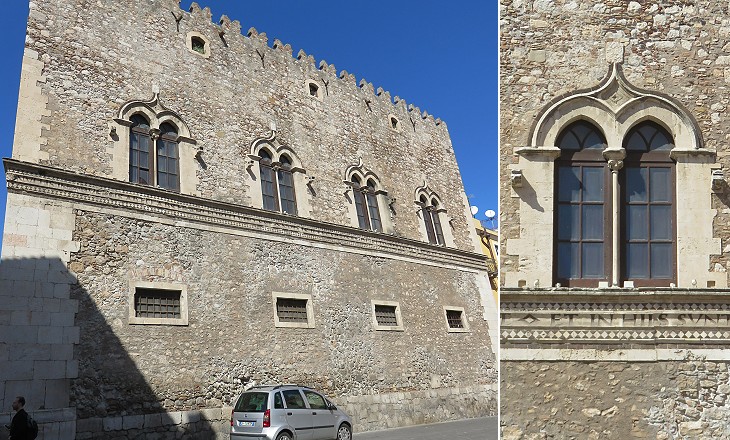 This once famous city is now reduced to an insignificant burgh. Brydone. XVIIIth century travellers had eyes only for ancient monuments and did not pay attention to other historical buildings of Taormina.
Palazzo Corvaja stands on the site of the Roman Forum and it was built by incorporating an Arab tower which protected the northern entrance to the town. Its eastern side is the result of an early XVth century enlargement. The band under the windows is decorated with sentences making reference to some of the cardinal and theological virtues. 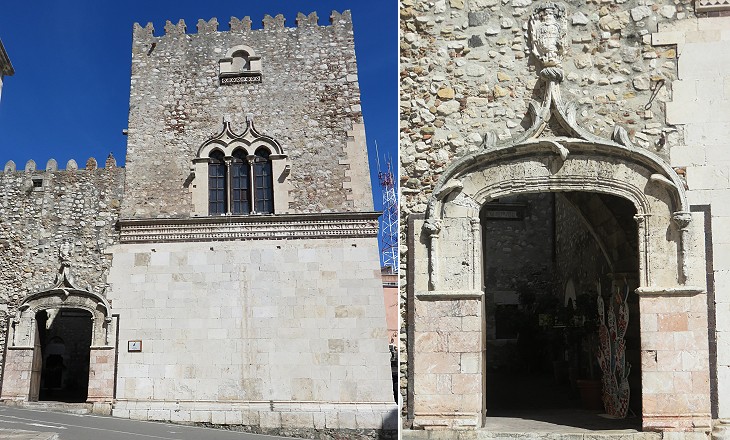 In 1282, as a result of the Sicilian Vespers, the throne of Sicily was offered to Peter III, King of Aragon. In 1295 it passed to a cadet son of the king. His descendants were not also kings of Aragon and they often set their court in Castello Ursino in Catania. In the early XVth century they utilized Palazzo Corvaja as a summer residence and for convening a meeting of the Sicilian Parliament, which was composed of feudal lords, high prelates and representatives of the main towns. 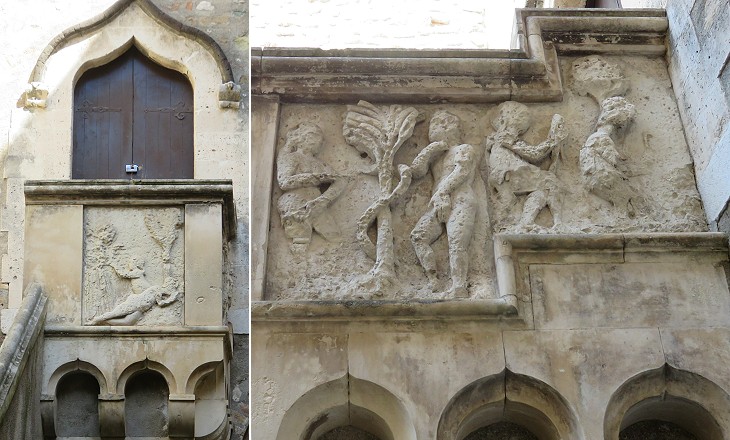 Palazzo Corvaja - reliefs in the courtyard

The building housed the offices of a judge in the XIIIth century and most likely because of this use the staircase in the courtyard was decorated with reliefs depicting the Creation of Eve, the Original Sin and the Expulsion of Eden, the first example of crime punishment. In 1538 the palace was bought by the Corvaja, a family from Messina. 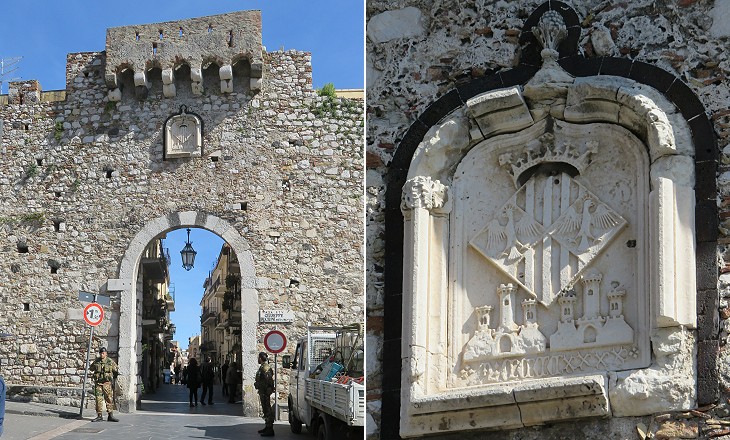 (left) Porta Catania; (right) 1440 coat of arms of the Kings of Sicily and a representation of the walls and gates of Taormina. The coat of arms of the Aragonese Kings of Sicily was made up of the vertical stripes of the House of Aragon and of the eagles of the House of Swabia, that of Holy Roman Emperor Frederick II, whose granddaughter married King Peter III of Aragon

The historical section of today's Taormina is comprised between two gates at its southern (Porta Catania) and northern (Porta Messina) ends. There is evidence of a slightly larger medieval enclosure which was eventually abandoned. The walls were restored during the Aragonese rule, but in the following centuries they were not upgraded to withstand the impact of cannon warfare. 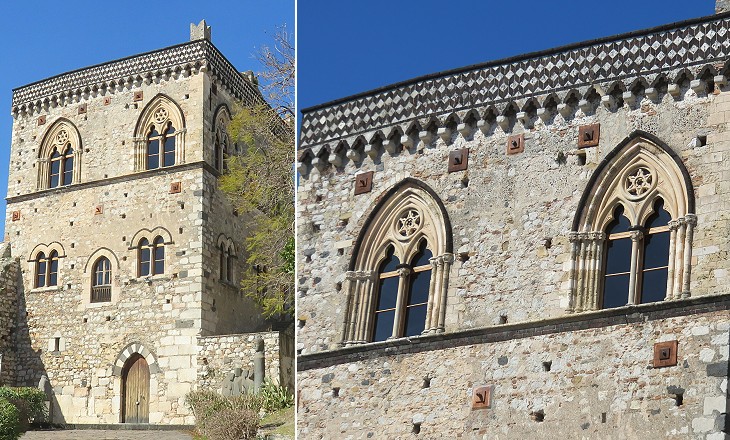 This palace near Porta Catania belonged for centuries to the De Spuches, a family from the Balearic Islands, a possession of the Kings of Aragon, who are recorded in Taormina already in 1428. The building was initially a tower of the inner medieval enclosure of the town. It was turned into a palace in the XVth century and other changes were made in the XVIIth century. It was bombed by the Allies in 1943 and its restoration enhanced the medieval aspect of the building which is very similar to that of Palazzo Corvaja. The use of black lavic stones for decoration purposes can be noticed also in buildings of Messina, Syracuse and Palermo. 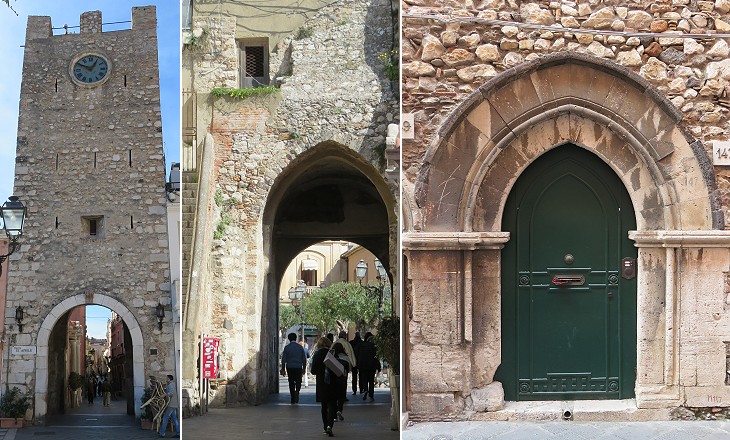 (left/centre) Torre dell'Orologio and the street which leads to Porta Catania; (right) portal of a nearby house

The population of medieval Taormina was so small that most likely in the XIth century the northern section of the town (which included all the Roman monuments) was no longer inhabited. Torre dell'Orologio is located midway between Porta Catania and Porta Messina and it was the northern entrance to the town. In 1676, during the rebellion of Messina, the French greatly damaged the tower. It was rebuilt in 1679, but it is not as tall as the previous one. 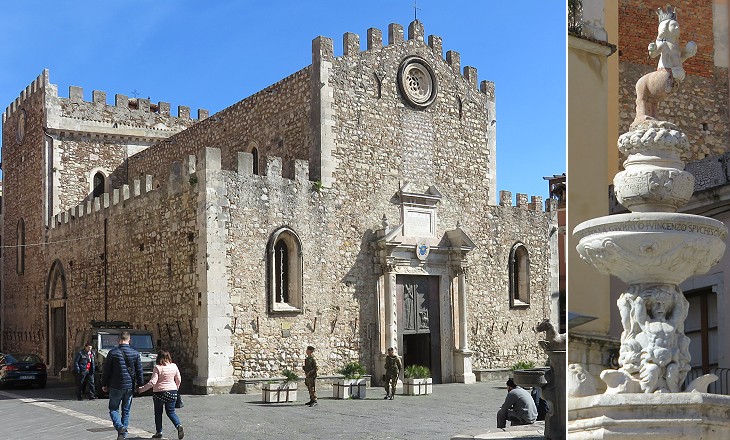 (left) Duomo (S. Nicolò); (right) detail of a 1635 fountain opposite the church supporting a small statue of a female centaur, symbol of Taormina

Taormina was a bishopric see until it fell to the Arabs. After the Norman conquest its territory was included in the diocese of Messina. Its main church is known as Duomo, although usually in Sicily the main church of a town which does not have a cathedral is called Chiesa Matrice or Chiesa Madre. Its dedication to St. Nicholas, Bishop of Myra is evidence of the strong ties which linked this part of Sicily to Greece. The battlements are a XXth century addition. 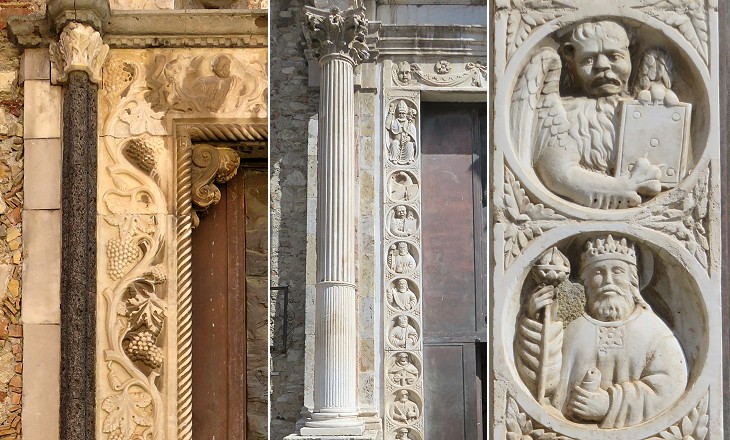 Duomo (S. Nicolò): (left) detail of a side portal; (centre/right) details of the main portal; the enlargements show the Winged Lion, symbol of St. Mark the Evangelist and an unidentified saint or King of Israel

The construction and decoration of the church span over a long period, i.e. from 1200 to 1700. The portals are decorated with reliefs of the XVth/XVIth centuries, although the main one was redesigned in 1636 at the initiative of the Giurati (Jurors), a small body of citizens in charge of the administration of the town. Their palace stood opposite S. Nicolò in the heart of the medieval town and it currently houses the Town Hall. 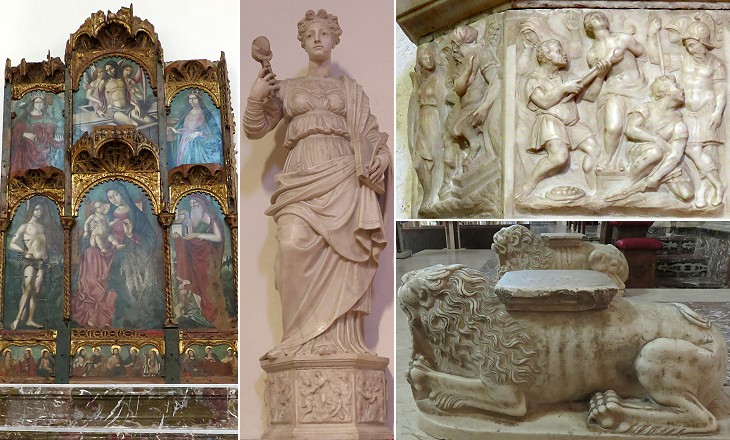 The interior of S. Nicolò was redesigned in 1945-1948 and it was freed of some XVIIIth century additions. It contains many works of art of the XVIth century, some of which, e.g. the statue of St. Agatha, decorated other churches. It houses also an inscription thanking God because Taormina was not affected by the January 1693 earthquake which razed many Sicilian towns, including Catania, to the ground. The December 28, 1908 earthquake which destroyed Messina did not greatly damage Taormina although it scared its inhabitants to death.
"All in a moment overwhelmed and fallen." - Milton.
The events of this fateful night in the small and well-known hill town of Sicily (Taormina), where I was at the time, may be briefly related thus.
At 5.20, when the morning was yet dark except for the brilliancy of many stars in a cloudless sky, and when the inhabitants were sleeping after the Christmas merrymaking, a violent upheaval of the earth, accompanied by a dull rumbling, awoke me. That was followed immediately by a convulsive shaking, which made me realize what a rat must feel when in the mouth of a terrier. I wondered how long that shaking would last. The first thought of those who live in "earthquake countries" is as to the duration and force of a shock, and whether it be wiser to take refuge in the open air. It seemed as if that trembling would never end. It lasted half a minute, though the instruments in the Messina Observatory, which were not destroyed, recorded thirty-five seconds as the duration of the greatest shock. Elsewhere in Sicily it was less. Then the roar of many waters was heard. It was the advance and receding of the seismic waves which added devastation to that of the earthquake.
Shouts, wailings, imprecations, desperate cries of terror and of appeal to the saints, accompanied by the barking of dogs, came from below and resounded from all quarters of the town.
Alexander Nelson Hood, Duke of Bronte, a town in Sicily - Sicilian Studies - 1915 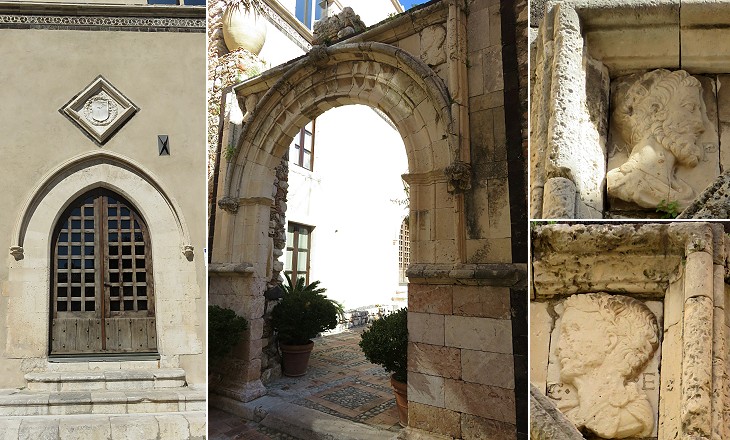 Palazzo Ciampoli: (left) 1412 entrance; (right) Renaissance portal which stood at the entrance to the property. It was made up of marbles from the theatre

This palace was rebuilt after the 1943 bombings which damaged it. Although some of its architectural elements, including the coat of arms of the family, are original, it nevertheless conveys a feeling of being new. It was preceded by a marble portal with reliefs portraying (generic) Roman emperors. The letters C. E. most likely refer to the owner of the building. 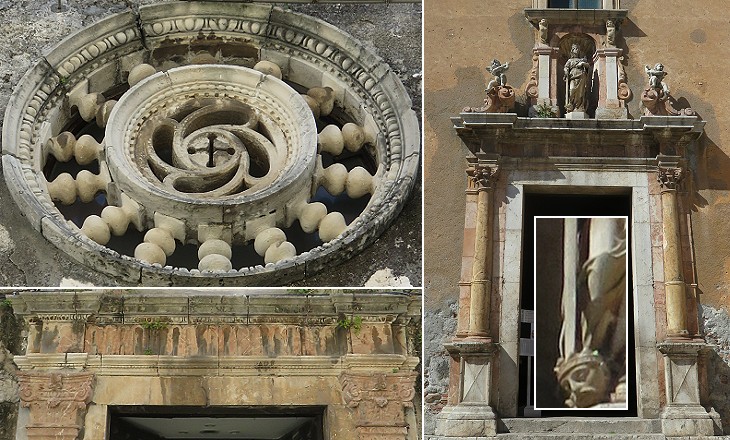 (left) S. Maria del Piliere (pilaster/small column); (right) S. Caterina della Ruota; (inset) detail of the statue of St. Catherine of the Wheel showing the head of the king who ordered her beheading, a particular which does not appear in the traditional iconography of the saint

Notwithstanding its small population Taormina housed a significant number of churches and monasteries/nunneries. The majority of the latter were confiscated after 1860 and some of them were turned into hotels which still exist.
S. Maria del Piliere was built in the XIVth century. The building was deconsecrated at the beginning of the XIXth century, but it retains an interesting rose window. The image used as background for this page shows a detail of the portal of S. Antonio Abate, another deconsecrated church of that period, outside Porta Catania.
S. Caterina della Ruota stands above the odeon opposite Palazzo Corvaja. It was built in the early XVIIth century. 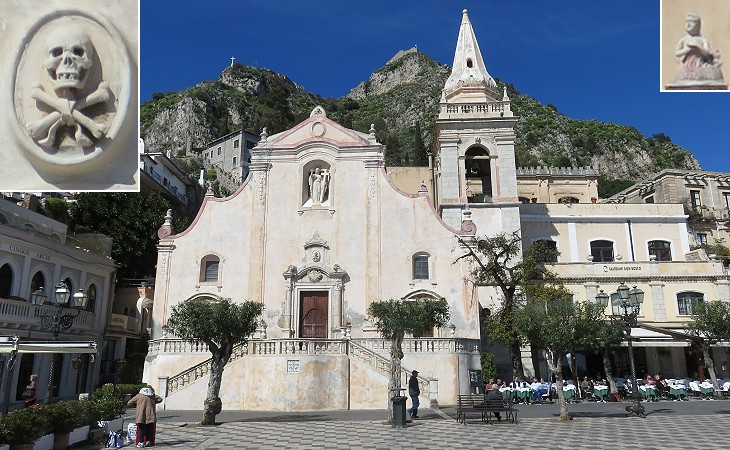 This large church was built in the second half of the XVIIth century by Confraternita delle Anime del Purgatorio, a brotherhood aiming at shortening the duration of the punishment of souls in Purgatory by prayers. The souls are believed to be purified by a cleansing fire and this explains some elements of the decoration of the façade. You may wish to see other skulls in churches of Rome and souls in Purgatory on Malta. 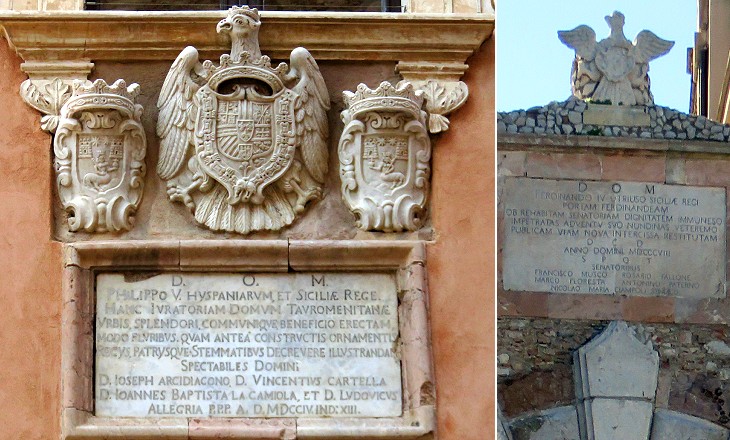 In some countries (e.g. France) or cities (e.g. Venice) statues, coats of arms and other symbols of the past were destroyed as a result of revolutions or dynastic changes. In Sicily, notwithstanding the troubled history of the island, this has occurred to a very limited extent. The coats of arms of the kings are almost always held by a crowned eagle, in origin a heraldic symbol of the House of Swabia.
Philip V was King of Sicily in 1700-1713. The legitimacy of his rule was challenged and eventually he had to give up the throne of Sicily, yet his coat of arms was not erased.
The inscription under the coat of arms at Porta Messina, shows that even the municipal authorities of Taormina had difficulties in dealing with the numbering of their kings. Ferdinand was IV as King of Naples, but III as King of Sicily. In addition the inscription indicates him as King of the Two Sicilies (Utriusque Siciliae) at a time when the two kingdoms had not yet been merged. As King of the Two Sicilies he was Ferdinand I. 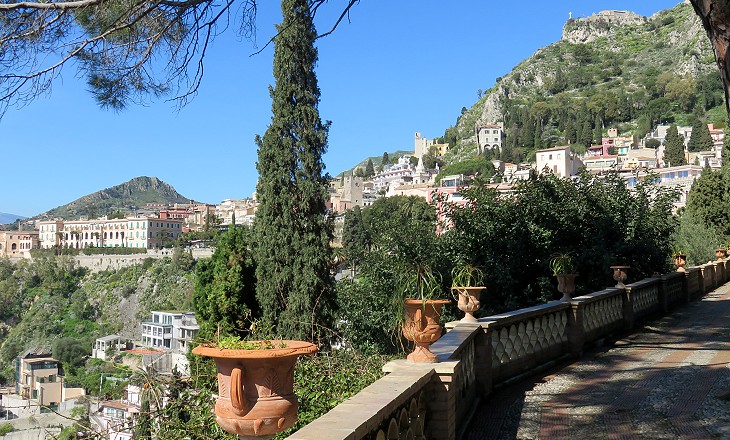 Taormina from a terrace of Villa Comunale, a garden designed by Florence Trevelyan, an English woman who lived in Taormina from 1884 until her death in 1907. She married a local physician who was Mayor of the town for many years. Between the end of the XIXth century and WWII many wealthy foreigners, especially British and German ones, choose to live or stay for long periods in Taormina. According to Harold Acton, in the 1920s the town was 'a polite synonym for Sodom'