- Agrigento - Other Monuments
(left) Temple to Hercules at Agrigento; (right) detail of the apse of Palermo's Cathedral

You may wish to read an introduction to this section or a page on the main temples first. 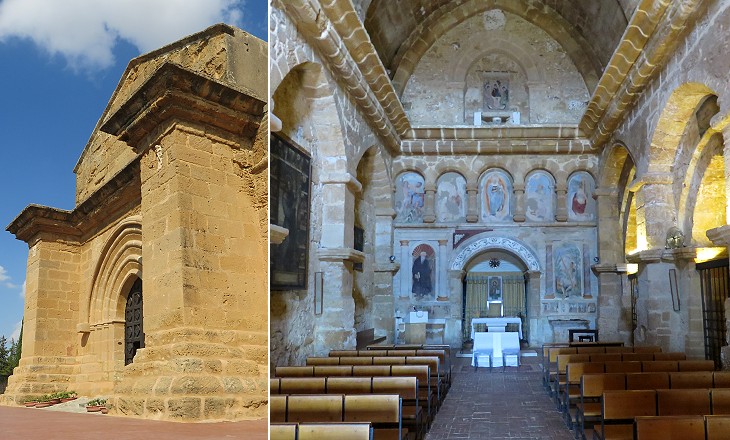 S. Nicola is a XIIIth century church built by the Cistercian Order on the site of an ancient building which according to tradition was the palace of Phalaris, a cruel tyrant of Agrigento. The church has some Romanesque and Gothic features, but its layout includes some walls of the original building. It stands on a commanding position over the temples of the ancient city. 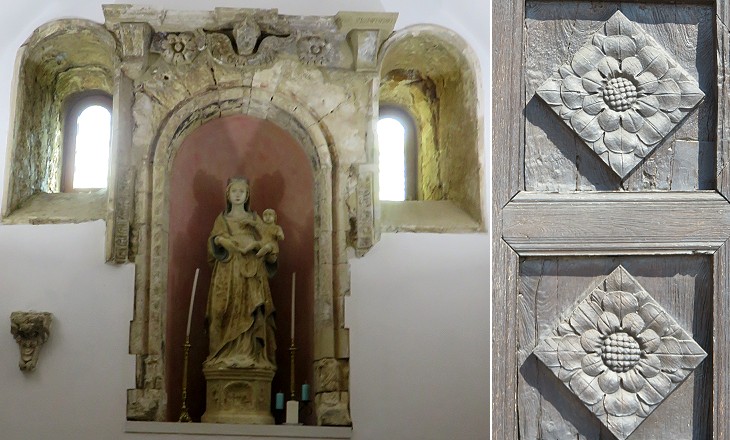 S. Nicola: (left) XVIth century chapel with a statue of the school of Antonello Gagini, the leading sculptor of his time in Sicily; (right) detail of the 1531 wooden door

In the XVth century the church and the adjoining monastery were assigned to the Franciscans who held them until 1789. In 1967 the newly founded Museo Archeologico Regionale di Agrigento was installed in the monastery. It houses the collections of a previous local museum, some exhibits which were on display in Palermo and Syracuse and most of the findings which occurred in Agrigento in the second half of the XXth century. 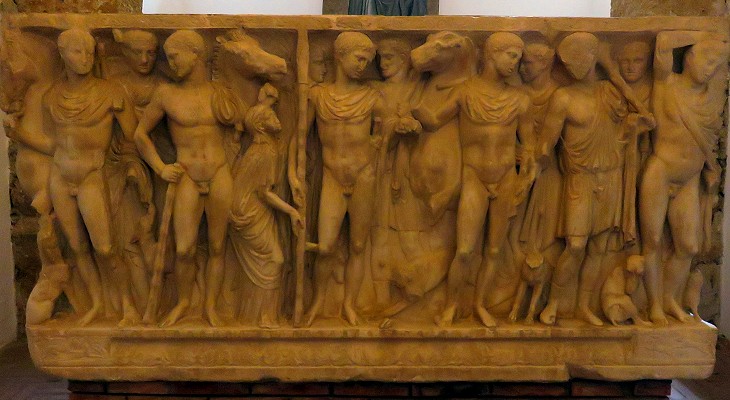 S. Nicola: sarcophagus of the early IIIrd century AD showing Hippolytus receiving a message from Phaedra while he is about to leave for a hunt (it used to be in the Cathedral)

The baptismal font is made out of an ancient sarcophagus faced with very beautiful basso relievos. The principal front exhibits several men with horses and hounds preparing for the chase, and a little aged female holding the principal figure, as if she wished to keep him at home. Swinburne
He conducted us to the principal church. In it there is an ancient sarcophagus in good preservation. The fact of its being used for the altar has rescued from destruction the sculptures on it. Hippolytus attended by his hunting companions and horses, has just been stopped by Phaedra's nurse, who wishes to deliver him a letter. As in this piece the principal object was to exhibit beautiful youthful forms, the old woman is a mere subordinate personage, is represented very little and almost dwarfish, in order not to disturb the intended effect. Of all the alto-relievos I have ever seen, I do not, I think, remember one more glorious, and at the same time, so well preserved as this. Until I meet with a better it must pass with me as a specimen of the most graceful period of Grecian art. Goethe. The German writer would have enjoyed seeing a fine sarcophagus portraying Hippolytus which was found near Tripoli in Libya and other similar sarcophagi in Arles and Tarragona. You may wish to learn more about Hippolytus and Phaedra or go through a list of sarcophagi which are shown in this website. 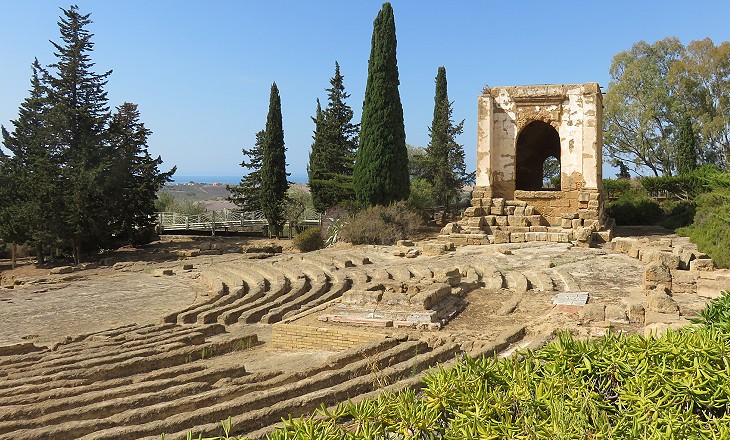 Ekklesiasterion, a site for popular assemblies (see a smaller one in Paestum) and "Oratory of Phalaris", actually a small temple built in the Ist century BC which was turned into a chapel of the monastery

In the orchard of this convent is a square building with pilasters, which is supposed to have been part of the palace of the Roman pretor. Swinburne
According to Diodorus Siculus (Bibliotheca Historica - Book XI - Loeb Classical Library): The sculptor Perilaüs made a brazen bull for Phalaris the tyrant to use in punishing his own people, but he was himself the first to make trial of that terrible form of punishment. For, in general, those who plan an evil thing aimed at others are usually snared in their own devices. This Phalaris burned to death Perilaüs, the well-known Attic worker in bronze, in the brazen bull. Perilaüs had fashioned in bronze the contrivance of the bull, making small sounding pipes in the nostrils and fitting a door for an opening in the bull's side; and this bull he brings as a present to Phalaris. And Phalaris welcomes the man with presents and gives orders that the contrivance be dedicated to the gods. Then that worker in bronze opens the side, the evil device of treachery, and says with inhuman savagery, "If you ever wish to punish some man, O Phalaris, shut him up within the bull and lay a fire beneath it; by his groanings the bull will be thought to bellow and his cries of pain will give you pleasure as they come through the pipes in the nostrils." When Phalaris learned of this scheme, he was filled with loathing of the man and says, "Come then, Perilaüs, do you be the first to illustrate this; imitate those who will play the pipes and make clear to me the working of your device." And as soon as Perilaüs had crept in, to give an example, so he thought, of the sound of the pipes, Phalaris closes up the bull and heaps fire under it. But in order that the man's death might not pollute the work of bronze, he took him out, when half-dead, and hurled him down the cliffs. The account by Diodorus Siculus brings to mind the way babies were sacrificed in Carthage and the cow built by Daedalus for Pasiphae. 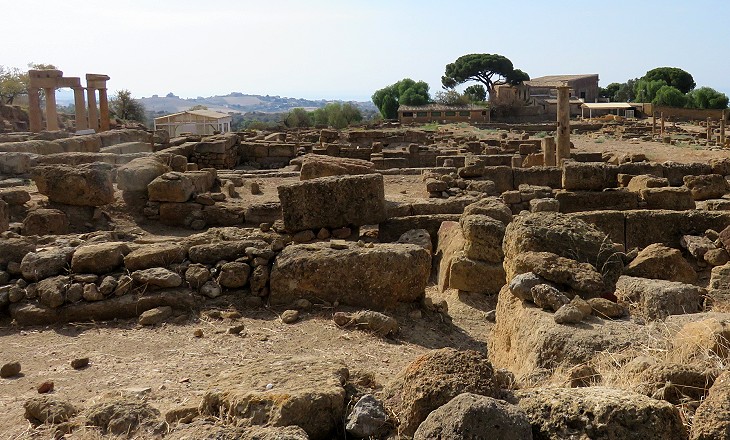 The whole space comprehended within the walls of the ancient city abounds with traces of antiquity, foundations, brick arches, and little channels for the conveyance of water; but in no part are any ruins that can be presumed to have belonged to places of public entertainment. Swinburne
A net of four north-south streets crossed by three east-west larger streets was identified near the monastery. The houses along these streets belong to different periods, but they all were built after the seizure of the town by the Romans at the end of the Second Punic War.

The decoration of some of the houses show that Agrigento enjoyed a degree of wealth during the Ist and IInd centuries AD, similar to what occurred in many towns of the Province of Africa. The mosaics which were found in this neighbourhood were most likely made by craftsmen from that province. One of the mosaics illustrates a fable by Phaedrus:
The Stag at the Stream
This story shows that what you contemn is often found of more utility than what you load with praises.
A Stag, when he had drunk at a stream, stood still, and gazed upon his likeness in the water. While there, in admiration, he was praising his branching horns, and finding fault with the extreme thinness of his legs, suddenly roused by the cries of the huntsmen, he took to flight over the plain, and with nimble course escaped the dogs. Then a wood received the beast; in which, being entangled and caught by his horns, the dogs began to tear him to pieces with savage bites. While dying, he is said to have uttered these words: "Oh, how unhappy am I, who now too late find out how useful to me were the things that I despised; and what sorrow the things I used to praise, have caused me." Translation by Henry Thomas Riley

This fine small sarcophagus depicts on the left a boy at school with his teachers and on the right the same boy mourned by his relatives. It was found broken into very many fragments in 1975 in a necropolis near the walls of the ancient town.
The image used as background for this page shows a detail of another Roman sarcophagus. These sarcophagi were most likely bought at Ostia. 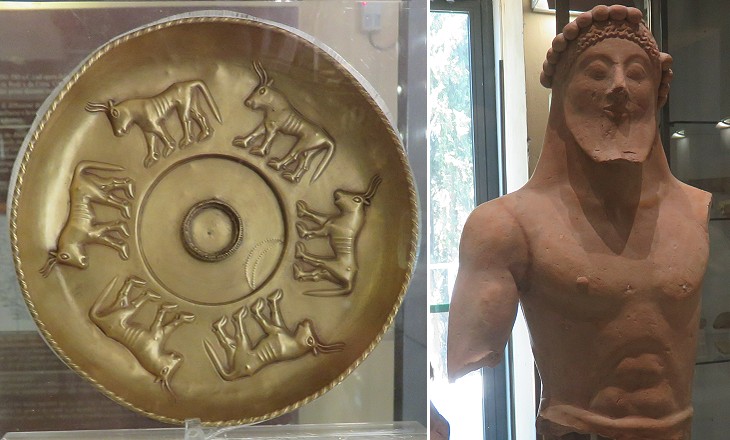 Among the curiosities belonging to the cathedral is an Etruscan vase of rare size and prefervation. There are also some golden pateras of extreme rarity, similar to one purchased at Girgenti by Sir William Hamilton, and by him deposited in the British Museum. Swinburne.
Sir William Hamilton was the British Ambassador to the Kingdoms of Naples and Sicily from 1764 to 1800 (you may wish to see his portrat by Pompeo Batoni; he holds a map of Italy in his hands - it opens in another window). He became a close friend of Queen Maria Carolina and he was allowed to undertake excavations at Agrigento and other ancient locations. 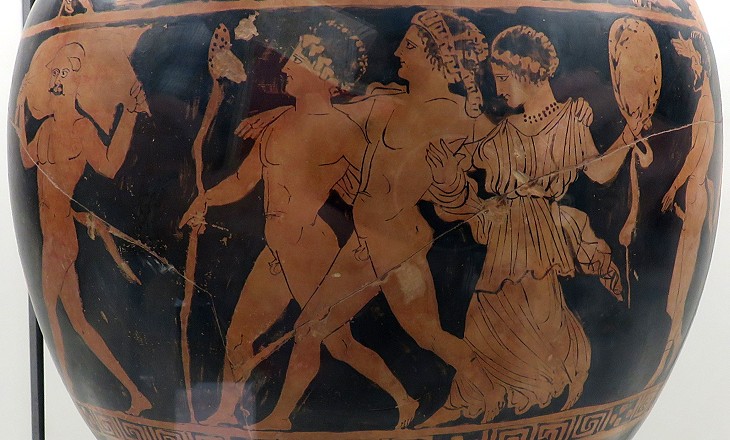 We were carried back to still earlier periods of art by the examination of a costly vase of considerable size, and in excellent condition (in the Cathedral). Goethe
Sir William Hamilton was an avid collector of vases, many of which he shipped home. Eventually the Kings of Naples and Sicily realized the value of the works of art which left their country. In 1822 a decree was issued to protect the archaeological sites. An archaeological museum was established in the premises of the University of Palermo to house the finest findings of new excavations on the island. Raffaello Politi, a painter and archaeologist, was appointed Royal Custodian of the Antiquities of Agrigento. 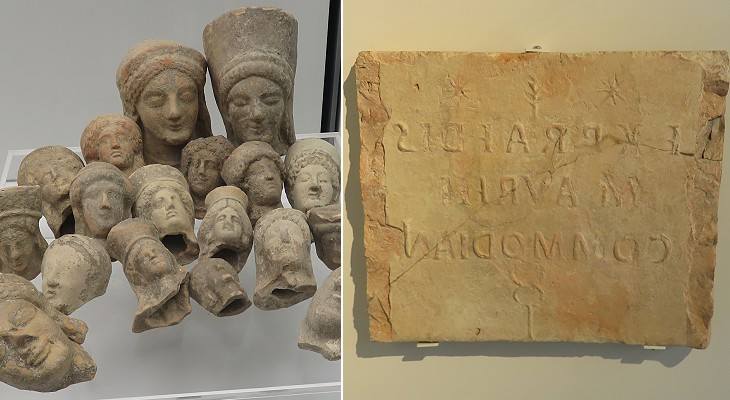 Archaeologists found in the Hellenistic-Roman neighbourhood of Agrigento a number of moulds bearing the name of the owner of a sulphur mine. The moulds were used at the mines to identify the manufacturer of the ingots of sulphur which paid a duty when they were shipped outside Sicily. It was the same practice which applied to fired bricks which were stamped with the brand of the manufacturer. In antiquity sulphur was used for its fumes in ceremonies and as a disinfectant. It was employed also to bleach cloth and in the preparation of incendiary weapons. A massive sulphur vein extends from Mount Etna to Agrigento. Today sulphur is produced as a by-product of oil refining processes. 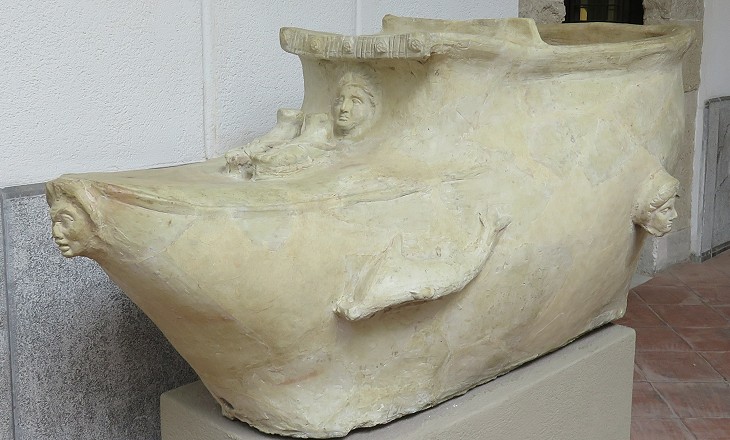 Individual bathtubs are rarely found by archaeologists because the Romans associated bathing with sweating and exercising and they washed themselves in public or private bath establishments. The specimen found at Agrigento was perhaps utilised by a landlady who did not go to public baths. 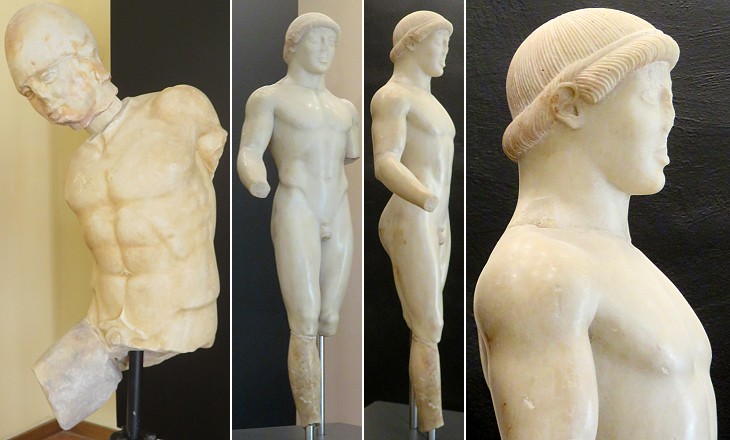 Museo Archeologico Regionale di Agrigento: Vth century BC statues: (left) torso of a warrior; (right) the Ephebe of Agrigento (you may wish to see the Ephebe of Selinunte, that of Reggio Calabria and the Youth or Charioteer of Motya)

The torso of the warrior was most likely a statue decorating the pediment of a temple. The Ephebe is high slightly more than 3 feet and it was found in 1897 (that of Selinunte in 1882). It was most likely made in Greece. It retains traces of red painting on the hair (similar to that of Reggio Calabria). It portrays a kouros, a Greek word meaning young man, youth of a noble rank, but some details (e.g. the neck) are not consistent with the assumed young age of the model.

Move to Agrigento - The Temples.