- Solunto (Soluntum)
(left) Temple to Hercules at Agrigento; (right) detail of the apse of Palermo's Cathedral 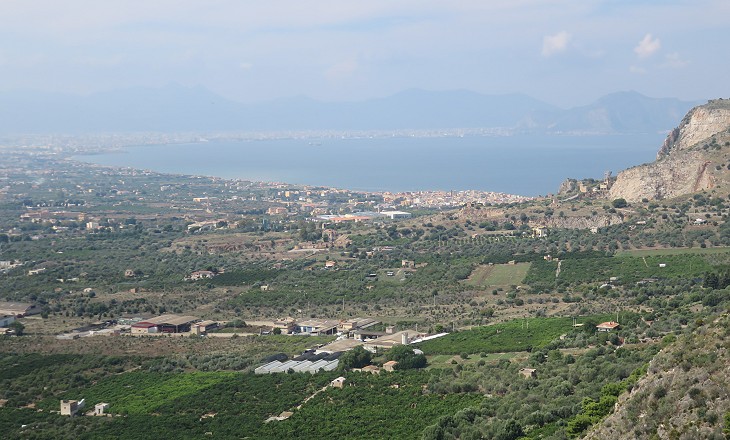 View over the Gulf of Palermo from Solunto

On the summit of Mount Catalfano, at a very short distance from the Bagaria, are the remains of an ancient city called Solus, or Soluntura, the origin of which must have been remote, because it is mentioned by Thucydides, as inhabited by the Phoenicians. (..) From the summit, where the original city stood, the view is delightful and extensive.
Sir Richard Colt Hoare - A Classical Tour through Italy and Sicily - published in 1819. View over Capo Zafferano from Solunto

On the rocks of Cape Zafaran, and on the shore at its foot stood the Greek city of Solus.
Henry Swinburne - Travels in the Two Sicilies. 1777-1780.
From Palermo to Bagaria the Carriage road is excellent and not far beyond the latter Place, on the summit of Monte Catalfano, are traces of the ancient Soluntum once inhabited by the Phoenicians.
Mariana Starke - Travels in Europe for the Use of Travellers on the Continent and likewise in the Island of Sicily - 1838 Edition - based on a travel to Sicily made in 1834.
In the XVIIIth and XIXth centuries the villas of Bagaria (today Bagheria) were a "must see" for all travellers who visited Palermo. Few of them however spent a couple of hours to see the not so far away ruins of Solunto, an ancient Phoenician/Carthaginian town on a commanding position on Mount Catalfano, at the eastern end of the Gulf of Palermo. In the plain beneath, many sepulchres have been discovered, the most perfect of which are near the villa belonging to the Prince of Torremuzza, and under his care. Colt Hoare
Gabriele Lancillotto Castello, prince of Torremuzza in Sicily, an accomplished beneficent nobleman, author of divers valuable works relating to the antiquities of his own country.
Memoirs of Thomas Hollis - 1780
Solunto was founded in the IVth century BC, but two sarcophagi which were found in 1695 and 1727 at Pizzo Cannita, in the plain below Mount Catalfano, are dated Vth century BC, so archaeologists believe that a Phoenician/Carthaginian settlement existed in the area before the foundation of the town. 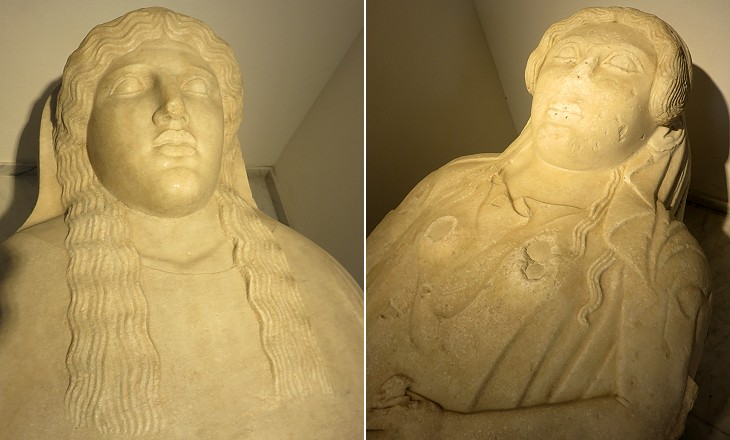 Those found at Pizzo Cannita are among the finest known examples of Phoenician sarcophagi; their overall shape brings to mind Egyptian patterns, while the faces of the dead reflect the influence of Greece. You may wish to see other Phoenician sarcophagi at the Museum of Beirut and those which were found at Tartous in Syria (now at the Louvre Museum) and at Gaza in Palestine (now at the Archaeological Museum of Istanbul). 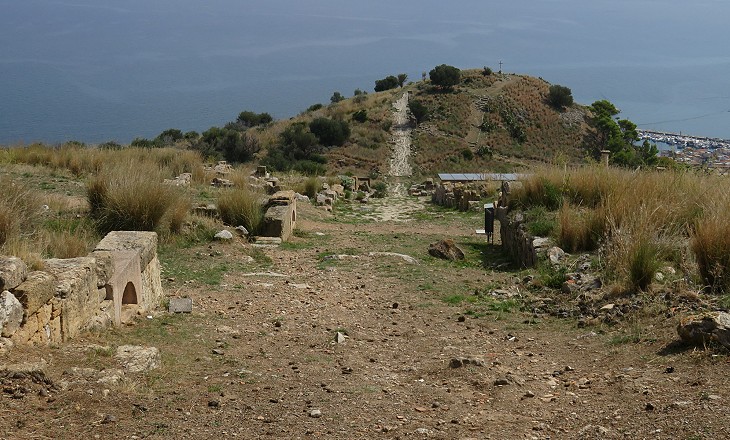 The main "cardo", a street which crossed the town from south-west to north-east

A description of its remains, in modern times, is given by Fazellus* (..) The mountain being uninhabited, and of difficult access, most of the remains mentioned by Fazellus still exist. But I am surprised he should leave omitted to notice the traces of two ancient roads, which led up to the city, on the south-eastern aspect. (..) I ascended by one of these roads on horseback, and descended by the other. (..) I also traced the walls, aqueducts, cisterns, and private dwellings. Colt Hoare
The layout of the town is typically Roman, because Solunto was conquered during the First Punic War and it continued to be populated until the third century AD. Because of the morphology of the ground the main streets are not aligned with the cardinal points.
* In 1558 Tommaso Fazello, a Dominican prior in Palermo and the author of the first printed history of Sicily, correctly identified the location of many ancient towns. 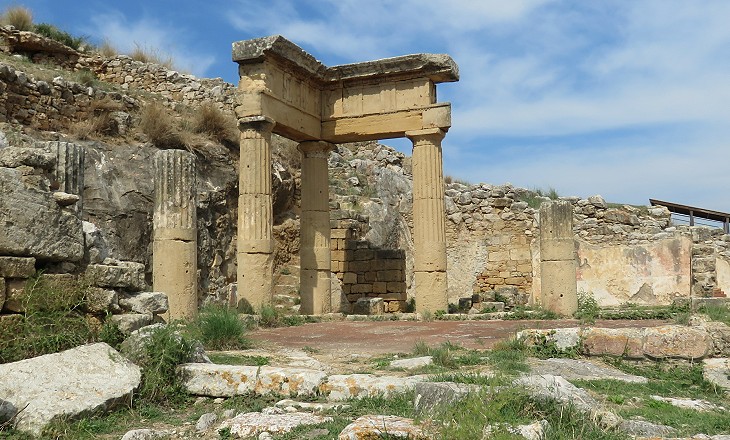 I found the remains of two temples, of Doric architecture, though of small proportions. Of one all the ornamental parts are left, such as the frieze, cornice, &c. and on the frieze is the representation of a lion's head (see the image used as background for this page). Colt Hoare.
It is likely that the fallen columns of a rich house were believed by Colt Hoare to be part of a temple (and later on to belong to a gymnasium). 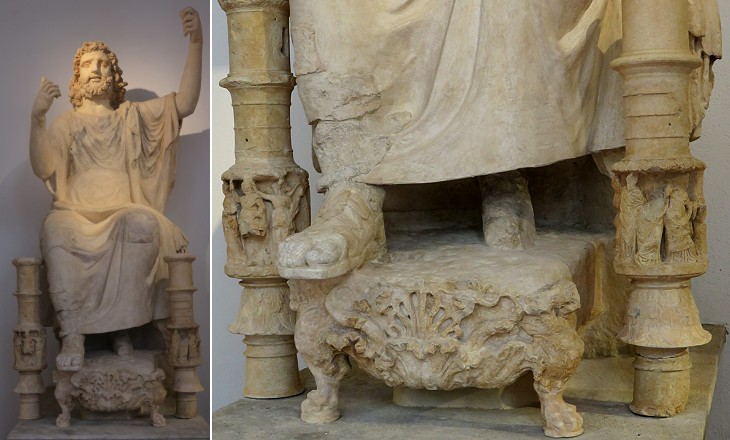 In 1825 the fragments of a colossal statue were found in the area of Solunto. The statue was sculpted into local limestone, but it had a marble face. The use of marble to represent some parts of the body can be noticed in some metopes of Selinunte. The statue was reconstructed and completed by Valerio Villareale, a leading sculptor of Palermo, but perhaps he did not get right the position of the arms. The design of the statue was most likely influenced by the statue of Zeus by Phidias at Olympia. It is dated IInd or Ist century BC, so after the Roman conquest of the town. The exact location of the temple which housed it has not been identified yet. The two decorated front legs of the throne were found in the proximity of the statue, but they were initially thought to be candelabra and not parts of the statue. 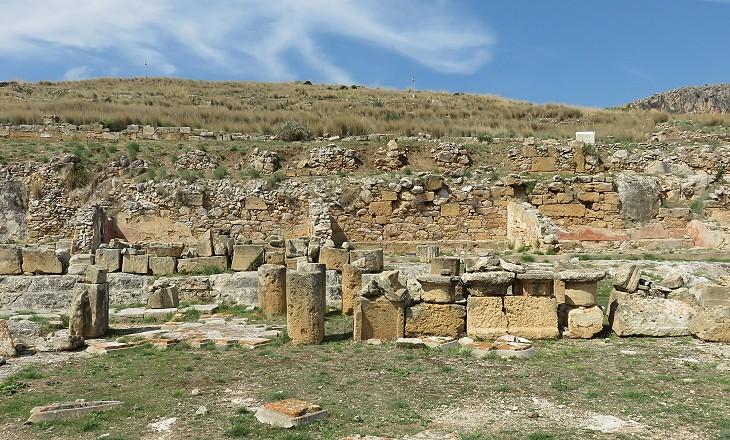 Solunto is yet to be fully excavated. The main buildings are aligned along the Decumanus Maximus, the street which crossed the town from south-east to north-west. At one point the street became wider and it created an agora or forum which was flanked by a portico with nine square buildings. 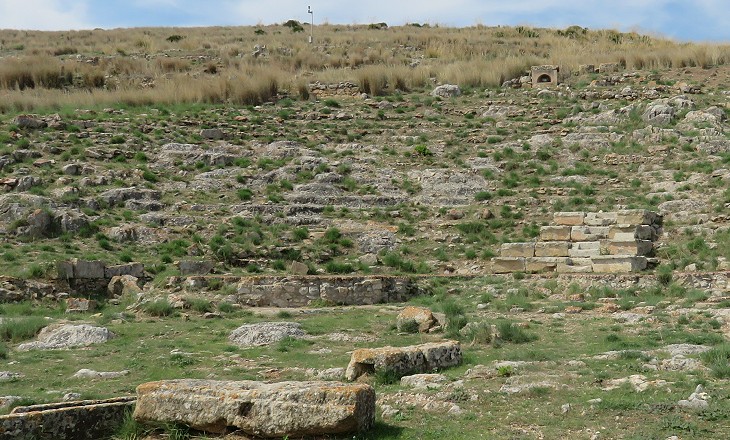 Site of the theatre and of a "bouleuterion"

Excavations found evidence of a small theatre adjoining the agora and most likely of a nearby bouleuterion, the site where the elders of the town gathered to decide about public affairs. You may wish to see the bouleuterion of Priene. The town appears to have flourished in the IInd and Ist centuries BC and then to have entered a long period of decline, which explains why there is no evidence of the theatre having been adapted to gladiatorial combats as it occurred in other Sicilian towns (e.g. Tindari). 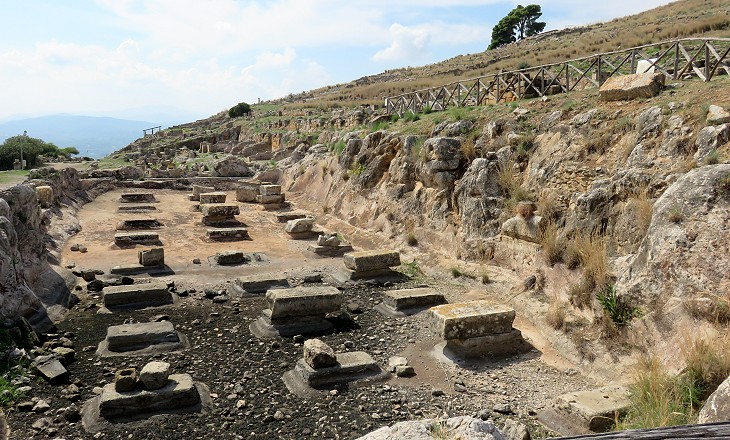 Solunto did not have an aqueduct and actually it would have been very difficult to build one because of the isolated and lofty location of the town. A large cistern existed at the end of the main street, but it is unlikely much rainwater could be collected there. Most of the houses had a small cistern and at the lower end of the town archaeologists have identified a small bath establishment. It is possible that the lack of that ample supply of water which characterized most Roman towns was the main reason behind the decline of Solunto, although this could be due to the town not having a large harbour which instead was available at Palermo. 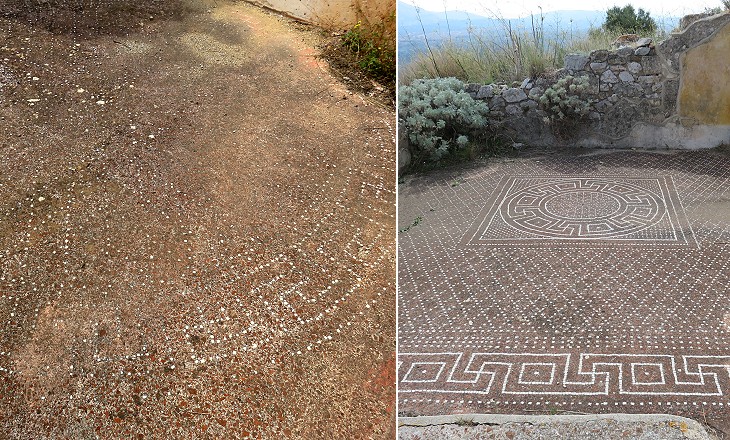 (left) House of the Round Mosaic; (right) a restored similar mosaic in another house

Almost all of the floors of the houses and a section of the main street were paved with cocciopesto aka opus signinum, tiles broken up into very small pieces which were kept together by mortar. These floors were waterproof and their use in the courtyard of the houses facilitated the collecting of rainwater. They were often decorated by inserting small white stones in the floor which had a natural reddish tint. Similar floors can be seen in Paestum and Kerkouane, a Carthaginian town on the coast of Tunisia which faces Sicily. 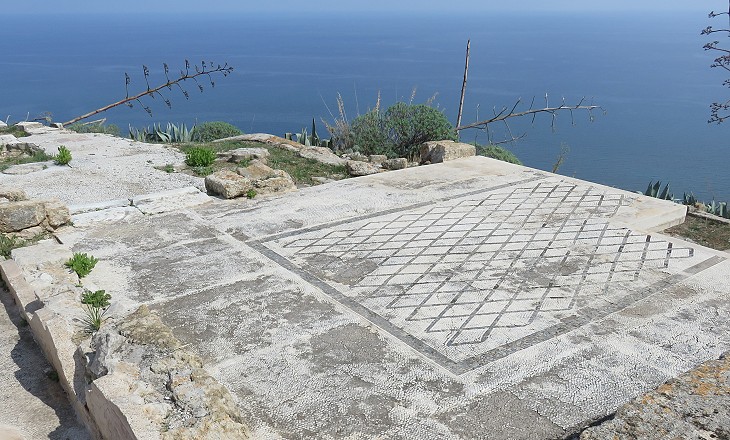 A few houses had more expensive black and white floor mosaics, but there is no evidence of elaborate coloured mosaics which came into fashion during the IInd century AD and which have been found in Palermo. A XVIth century description of the town mentioned the existence of walls, but these today are not clearly traceable. House of Leda (you may wish to see that in Pompeii): fresco (left) and armillary sphere (right)

In 1963 one of the finest houses of Solunto was excavated. It is named after a fresco depicting Zeus in the form of a swan with Leda, but its most interesting feature is a floor mosaic with lead inserts which depicts an armillary sphere, an instrument designed by Eratosthenes for determining astronomical positions. Exhibits in the small museum attached to the archaeological area