- Tindari (Tyndaris)
(left) Temple to Hercules at Agrigento; (right) detail of the apse of Palermo's Cathedral 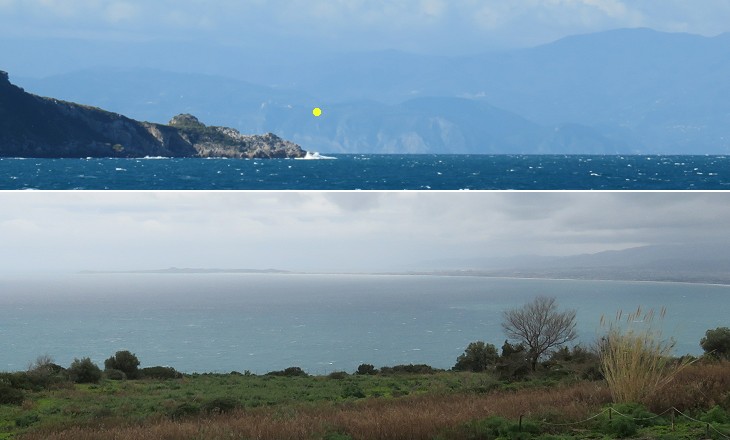 (above) Tindari (yellow dot) seen from Cape Milazzo; (below) the peninsula of Milazzo seen from Tindari

I directed the light gun boat to go round the Promontory to the Bay on the west side of Milazzo early this morning and at 9 o clock AM we embarked with the Rev Mr Corsellis and stood across the Bay to Oliveri. It took three hours and a half to get there and we then landed and walked up the hill to see the small remains of the ancient Tindari. (..) I think Tindari full sixteen miles from the west side of Milazzo and it must be at least twenty six miles by land.
George Cockburn - A Voyage to Cadiz and Gibraltar: up the Mediterranean to Sicily and Malta in 1810/11
Dionysius (the Elder, tyrant of Syracuse) settled in Messina a thousand Locrians (from a Greek town in Calabria), four thousand Medmaeans (from another Greek town in Calabria), and six hundred Messenians from the Peloponnesus who were exiles from Zacynthus and Naupactus. But when he observed that the Lacedaemonians (the Spartans) were offended that the Messenians whom they had driven out were settled in a renowned city, he removed them from Messina, and gave them a place on the sea (in 396 BC). The Messenians named their city Tyndaris, and by living in concord together and admitting many to citizenship, they speedily came to number more than five thousand citizens.
Diodorus Siculus - Bibliotheca Historica - Book XXII - Loeb Classical Library edition 1946 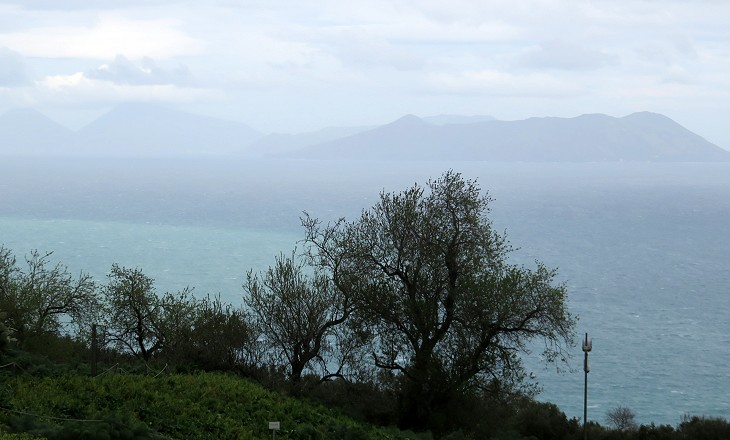 The Aeolian or Lipari Islands seen from Tindari

Ascending a mountain covered with olive trees you arrive in the neighbourhood of the once famous Tyndaris which is too interesting to be passed by without examination. Nothing can equal the purity of air or beauty of situation enjoyed by those who live here; now they consist however only of some monks who have built a convent on the highest part of the promontory.
Edward Blaquiere - Letters from the Mediterranean - 1813
The Hill is steep and high and on the top and nearly perpendicular over the sea is a Convent most picturesquely situated from which and indeed from all the site of Tindari there are views that for beauty are beyond my power of description. Cockburn 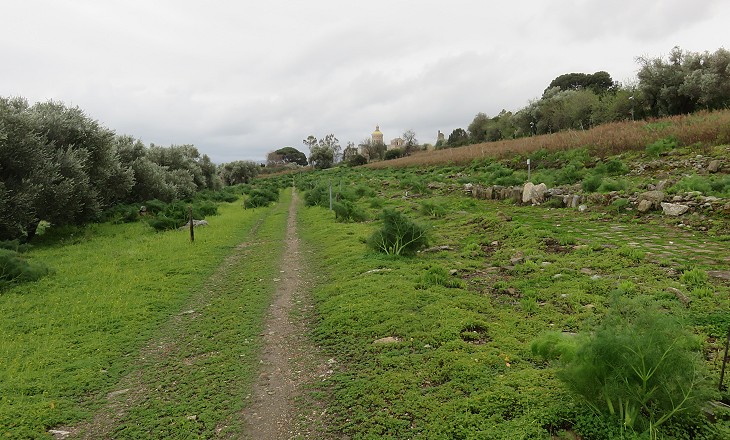 View of a "decumanus" (east-west street) from its western end

Pontus (..) rapuit in Sicilia dimidiam Tyndarida urbem.
Pliny the Elder - Historia Naturalis - Book II: 94
I returned to the mountain of Oliveri to visit the remains of Tyndaris, which I had passed yesterday. At present the sanctuary of Sta. Maria, the only building on the summit, marks the situation of this ancient city. (..) Pliny states that half this city fell down into the sea, probably on the side where a deep and steep precipice seems to mark the catastrophe (most likely in 17 AD).
Sir Richard Colt Hoare - A Classical Tour through Italy and Sicily - published in 1819.
The sanctuary of Madonna del Tindari marks the eastern end of the ancient town which lay on a lofty terrace sloping down towards the sea. Its east-west length was approximately half a mile whereas its north-south size was rather limited, most likely because of a major landslide which Pliny attributed to a sea earthquake. 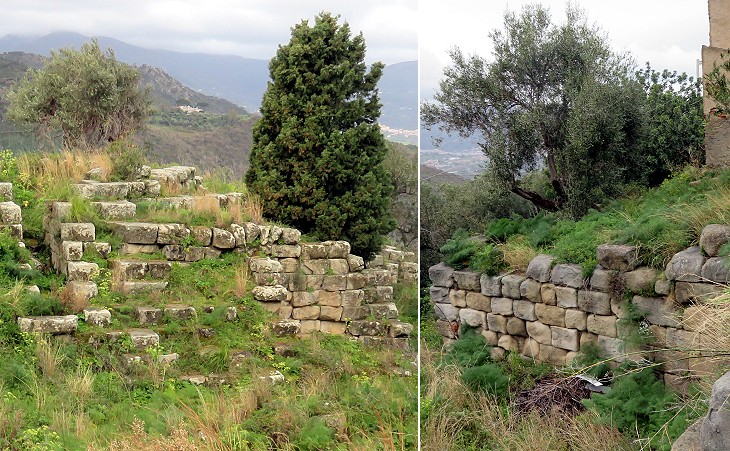 A very considerable part of the walls still remains, wonderfully well built, of large oblong stones, without cement. Colt Hoare
Tindari was an ally of Syracuse during the long conflict between this city and Carthage in the IVth century BC and its inhabitants built walls where their town was not already protected by the steepness of the ground. In general the history of Tindari was very similar to that of Syracuse. 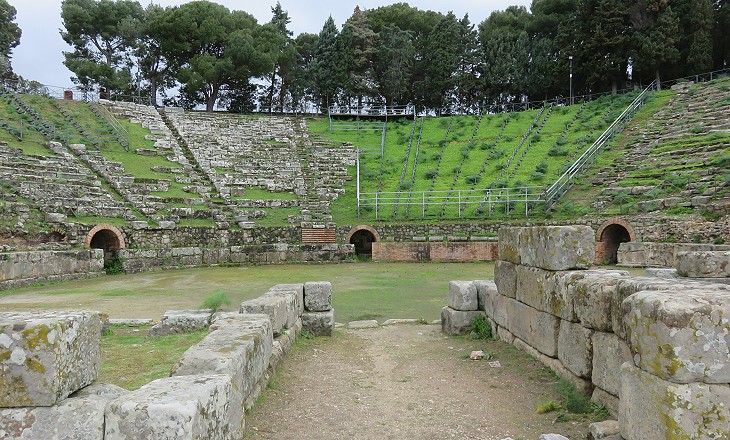 Of the theatre, the entire front, and part of the walls adjoining the scene, are still extant. Colt Hoare
The ruins of a Theatre are also very distinct and as usual with the ancients placed in a beautiful situation. Cockburn
The ruins of a large amphitheatre are still visible and the site of two superb temples one dedicated to Minerva and another to Mercury have also been ascertained. Blaquiere 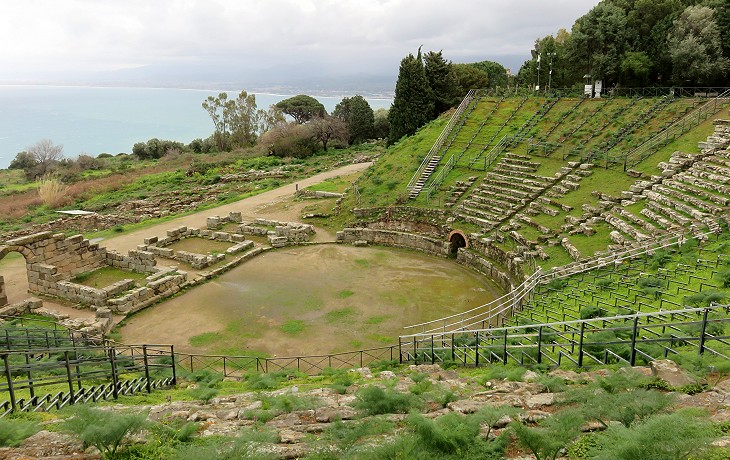 The three travellers were right in claiming they had visited a theatre (Cockburn/Colt Hoare) or an amphitheatre (Blaquiere). Initially the structure was no doubt a theatre and it was built approximately at the same time as that of Syracuse in the IIIrd century BC. It was turned into an amphitheatre in the IInd or IIIrd century AD by creating a circular arena which could be directly accessed by gladiators or beasts. A wall protected the spectators (the arena was at a slightly lower level than it is today). 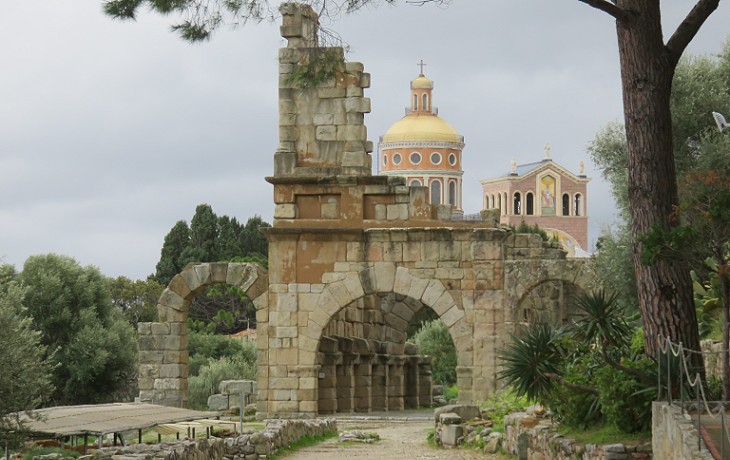 Basilica (and behind it the modern sanctuary of Madonna del Tindari)

Near the theatre is another magnificent structure, with various arches, niches, and pilasters, and unlike any other building that I have seen in Sicily. Its destination I cannot guess, unless it was part of the Gymnasium, commemorated by Cicero. Colt Hoare
One of the reasons why XVIIIth century travellers wanted to visit Tindari lied with the town being repeatedly mentioned by Cicero in his speeches in the trial of Gaius Verres, a Roman governor of Sicily who was charged with corruption and extortion. 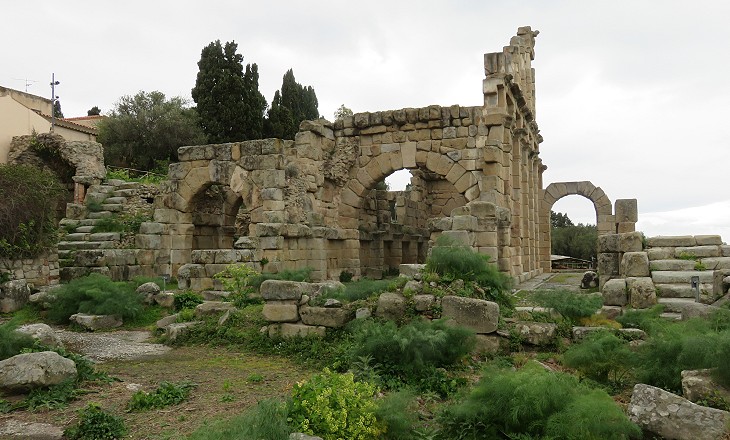 Basilica - eastern side with steps and niche

Tindari formerly contained a temple, dedicated to Mercury, and boasted of a much revered statue, which was carried away by the Carthaginians; but on the destruction of Carthage, restored to the city by Scipio the Younger. (..) This statue was afterwards stolen by Verres, the universal plunderer of Sicily. Colt Hoare
What! did you take away from the people of Tyndaris an image of Mercury most beautifully made, and placed there by the beneficence of the same Scipio? And how? O ye immortal gods! How audaciously, how infamously, how shamelessly did you do so! You have lately, judges, heard the deputies from Tyndaris, most honourable men, and the chief men of that city, say that the Mercury, which in their sacred anniversaries was worshipped among them with the extremest religious reverence, which Publius Africanus, after he had taken Carthage, had given to the Tyndaritans, not only as a monument of his victory, but as a memorial and evidence of their loyalty to and alliance with the Roman people, had been taken away by the violence, and wickedness.
Cicero - In Verrem - 2. 4. 82 - Translated by C. D. Yonge 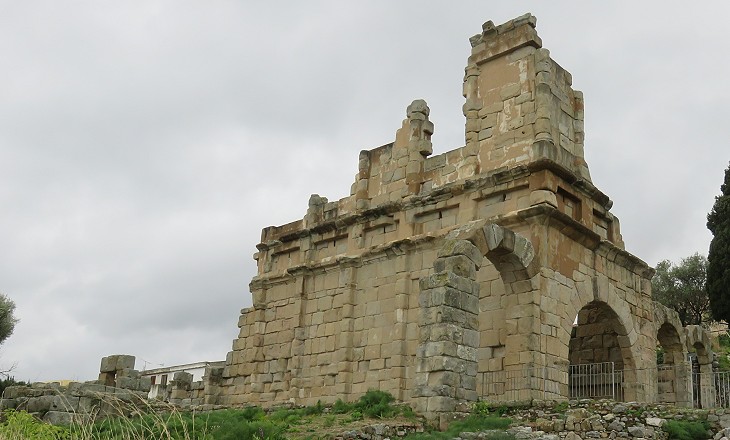 This large building is dated IIIrd century AD, so it did not exist at the time of Cicero. It had three storeys and it must have housed tribunals and other public facilities. It provided the Forum of the town with a grand entrance. The area was modified during the Byzantine rule over Sicily when the population of Tindari shrank and new walls were built by using materials from the temples and porticoes of the Forum. The Basilica itself was turned into a small fortress. 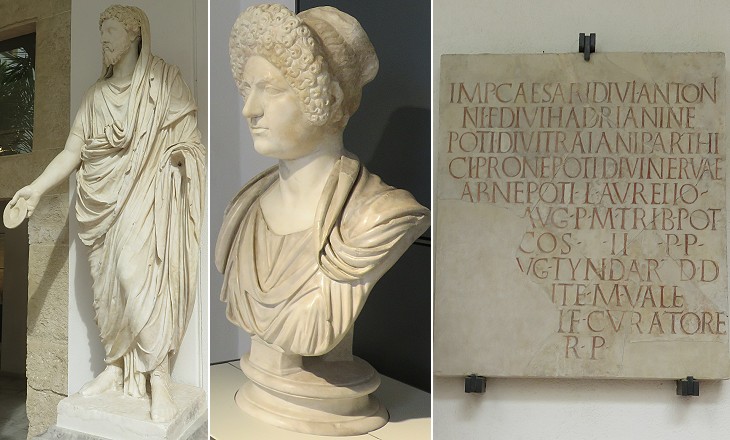 In the courtyard of the sanctuary is the leg of a colossal figure, resting on a trunk, the headless body of a colossal figure, and the fragments of other statues. Without the door is a large piece of marble cornice. Colt Hoare
Several colossal statues have been found there and prompted by his usual zeal for the fine arts Mr. Fagan, our consul general at Palermo, some time ago made excavations near the theatre; a very fine consular statue together with several interesting fragments soon rewarded the labour of his laudable undertaking. Blaquiere.
Prior to being appointed consul in Palermo, Robert Fagan, an Irish painter, undertook some of the very first excavations of Ancient Ostia. 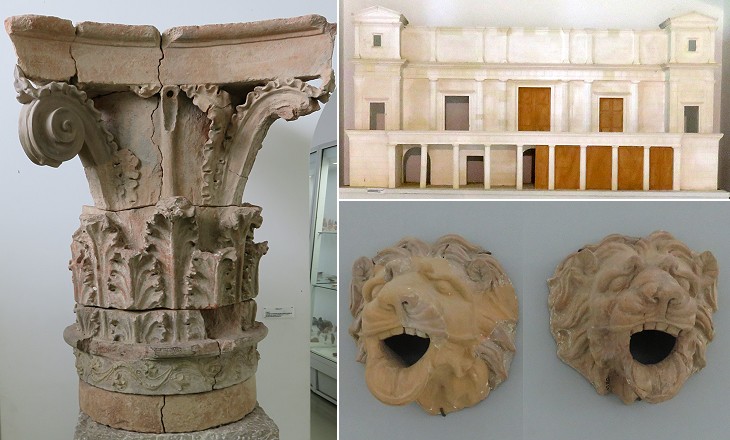 Museum of Tindari: (left) terracotta capital; (right-above) model of the basilica; (right-below) gutters. The image used as background for this page shows a detail of a large cornucopia (horn of plenty) in this museum

Excavations in Tindari continued throughout the XIXth century and all the main findings were moved to Palermo. The yields of more recent campaigns are housed in a small museum at the archaeological area. 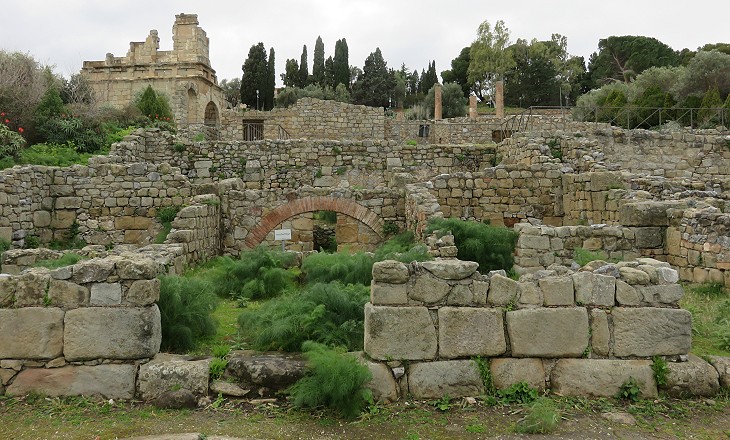 Overall view of Insula IV with some taverns in the foreground

Of this ancient city sufficient vestiges are left to reward the labour of every curious investigator. (..) I observed many other foundations and remains of buildings, a mosaic pavement. Colt Hoare
Tindari had a very regular urban layout: two (or three) very long decumani (east-west streets) which were crossed by some twenty cardi (south-north streets). The latter were short and they sloped down towards the sea. The insulae (blocks) between the two decumani were identified and numbered during the XXth century. In the 1950s archaeologists unearthed a series of Roman buildings in an insula near the Basilica. 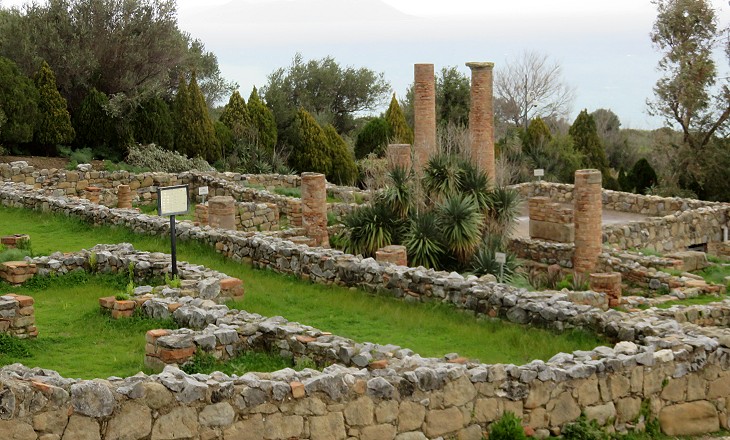 The sides of the insula on the two decumani had commercial purposes: taverns on the northern side and a small bath establishment on the southern one. The centre of the insula was occupied by a sizeable domus (individual house) and by a smaller one, both with a peristyle, a colonnaded courtyard which gave light and access to the rooms. 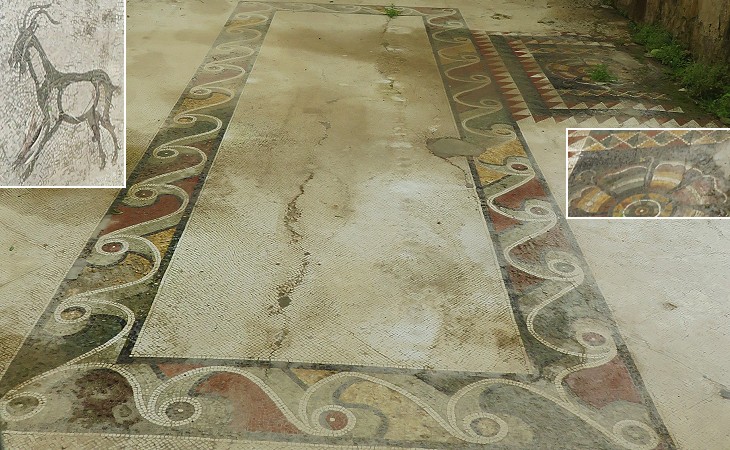 The houses are dated Ist century BC and their coloured geometric mosaics belong to that period. In the following century changes were made and black and white mosaics with small subjects replaced some of the previous mosaics. 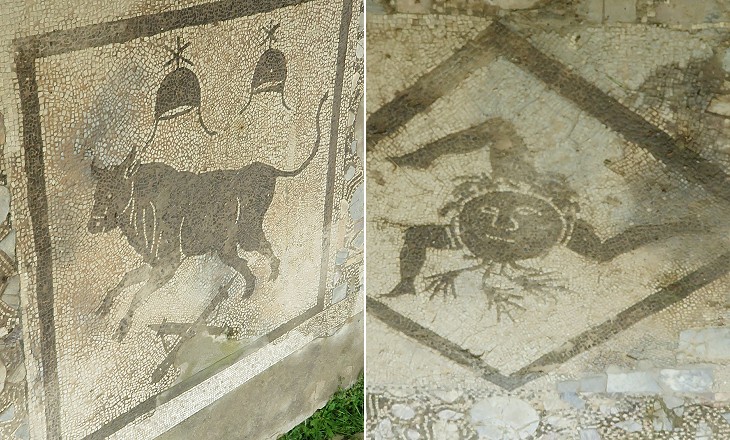 Tindari was named after Tyndareus, putative father of Pollux and real father of Castor. The two twin brothers were known as the Dioscuri, but sometimes they were referred to as the Tyndarids. The inhabitants of Tindari worshipped them as patrons and mythical founders of their town. The Dioscuri wore skull caps resembling an egg, because according to tradition they were hatched from an egg (Zeus companioned with Leda in the form of a swan. She laid an egg from which were hatched Helen, Castor and Pollux. From Robert Graves - The Greek Myths). The sceptres in the mosaic are another reference to them which can be seen also in Ostia. 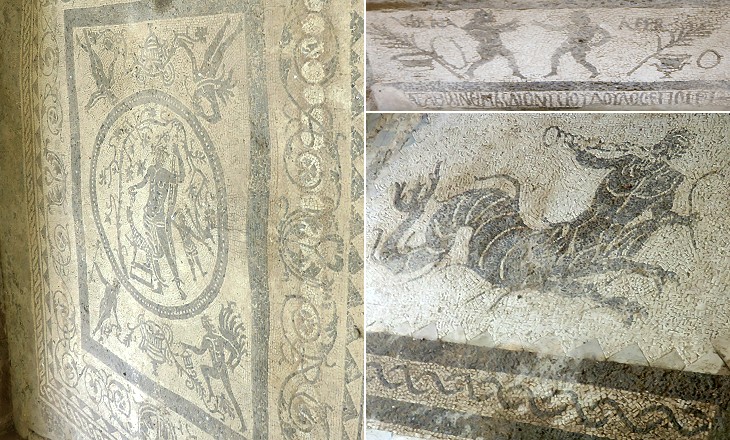 The mosaics which decorate the bath establishment bring to mind those of baths and houses of Ostia e.g. Domus di Bacco e Arianna, Terme di Porta Marina and Terme di Nettuno. It is likely that many seamen and merchants of Tindari were familiar with them. You may wish to see a page with descriptions by Seneca of what went on in a Roman bath establishment. 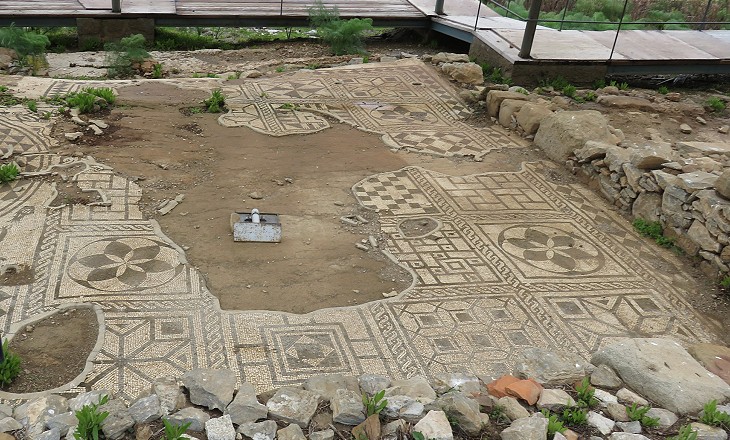 A campaign of excavations in 1993-2003 unearthed a series of buildings in its western section which was the first one to be abandoned. A large black and white geometric mosaic indicates that the inhabitants of the town, similar to those of Rome, preferred these mosaics, rather than the coloured ones, at least until the IInd century AD, see those in Villa dei Volusii in the environs of Rome. 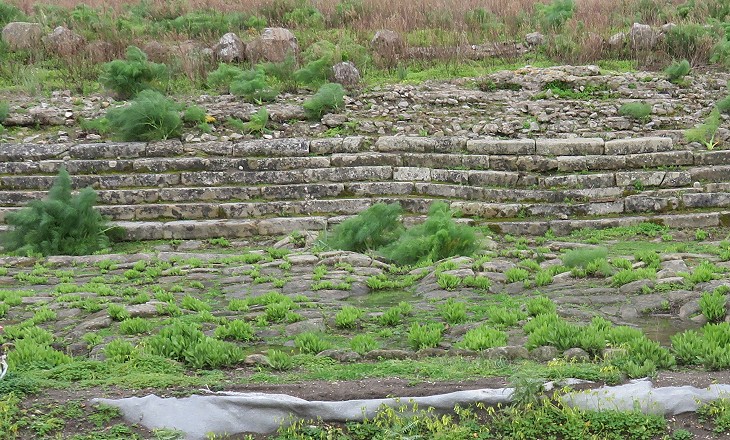 Insula XVII - Steps of a monumental building and paved road

Excavations in the western section of Tindari are yet to be completed and some of the mosaics and other findings are temporarily covered. Access to some areas is restricted, especially to those on the edge of the sea precipice. The locations of other baths, shops, a public latrine and a funerary monument have been identified. 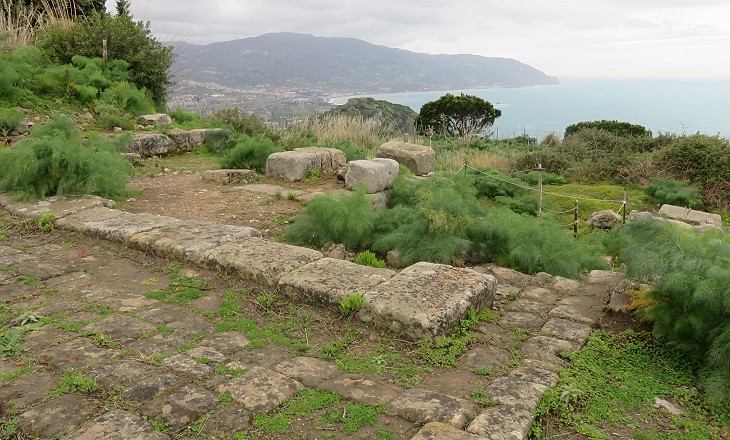 Archaeologists have still to identify the location of the harbour of Tindari. The recent unearthing of a monumental entrance to the town at its western end suggests that maybe the harbour was located on the coast immediately below it.
In the evening I returned to Patti, amidst a violent storm of wind, rain, thunder, and lightning. Colt Hoare. 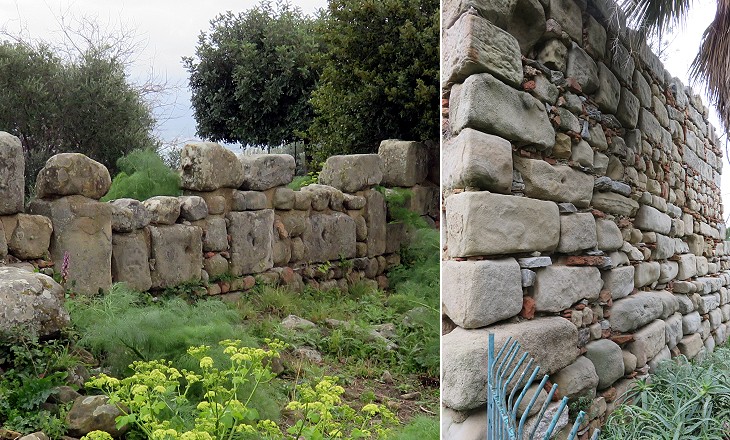 (left) Byzantine walls in the area of the Forum; (right) Byzantine tower in the southern walls

Byzantine Tindari was limited to the eastern section of the town which was fortified by new walls. Tindari fell to the Arabs in 836 and it was abandoned soon afterwards.