You may wish to see an introduction to this section with a map of the area or a page on Lucus Feroniae, a nearby Roman town first. 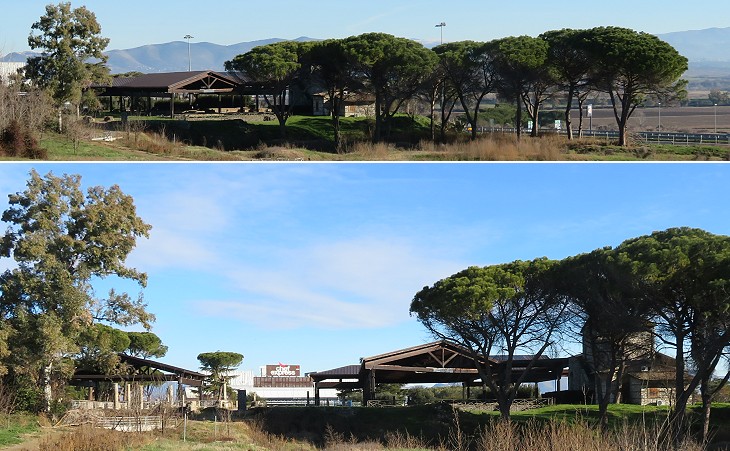 Archaeological area: (above) from the pedestrian bridge leading to "Lucus Feroniae"; (below) from the presumable site of a garden: (left) portico with "ergastula" and "Lararium"; (right) residential building

In 1961, during the construction of Autostrada del Sole, a key highway linking Milan to Rome, evidence was found of an ancient villa near the right bank of the River Tiber, only hundreds of yards from Lucus Feroniae. Parts of the villa were more or less accidentally destroyed to go ahead with the highway construction. Eventually, after thick walls and floor mosaics were found, the site was protected. 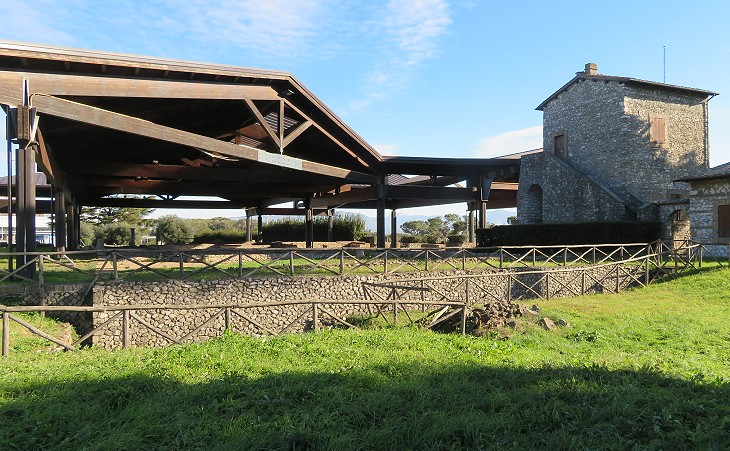 Residential building and the medieval tower of a farm

The villa was initially meant only for the otium (rest and recreation) of the landlords. Later on it was redesigned because it became the headquarters of a large farming estate, although the main building continued to be used as a richly decorated mansion and some of its floor mosaics were replaced with new ones. In the XVIIth century the area was part of Casale di Scurano, a property of Prince Camillo Pamphilj. 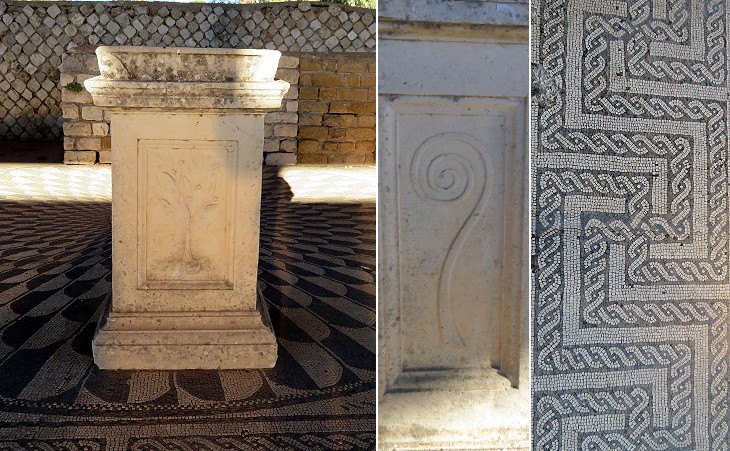 "Lararium": (left) altar with a relief symbolizing the sacred wood of the "Arvales"; (centre) relief depicting a "lituum", the curved wand of the "Augures" (and later on of the bishops); (right) detail of the floor mosaic

The most interesting part of what is left of the Roman villa is the Lararium, a room (or sometimes a niche) containing the images of the Lares, protectors of the house and the family (see some lararia at Pompeii). The altar found in the Lararium gives an insight into an aspect of the religiosity of the Romans, which is very different from the worship of the Twelve Olympian Gods. It is decorated with references to the Arvales and to the Augures. The former were members of a college of twelve priests who offered yearly sacrifices to the Lares to protect harvests. The ceremony took place in May: it lasted three days, one of which was spent in a sacred grove near Via Portuense. The latter interpreted the will of the gods by studying the flight of birds, a practice which was at the very root of the foundation of Rome. The lituum was used to indicate an area of the sky or to count the birds. At the time the altar was made Cicero was already criticizing this practice:
Romulus, who founded the city by the direction of auspices, believed that augury was an art useful in seeing things to come - for the ancients had erroneous views on many subjects. But we see that the art has undergone a change, due to experience, education, or the long lapse of time. However, out of respect for the opinion of the masses and because of the great service to the State we maintain the augural practices, discipline, religious rites and laws, as well as the authority of the augural college.
De Divinatione - Book II - Loeb Library 1923
The Augures had a temple on the Palatine Hill. 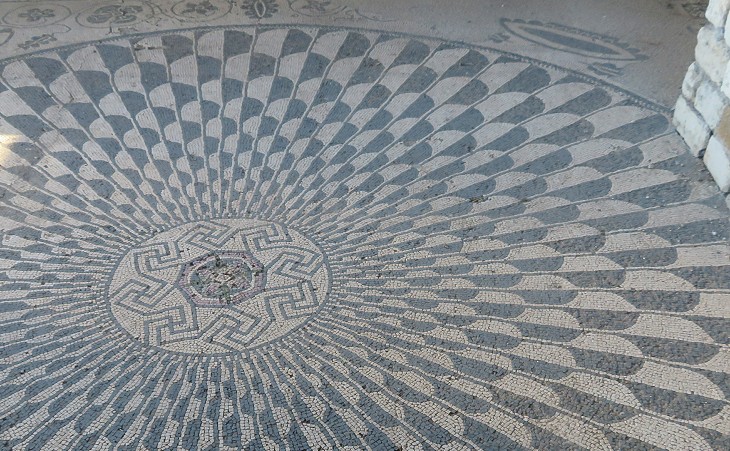 "Lararium": floor mosaic (its central section with a series of swastikas, perhaps indicating perpetual motion, can be seen in the image used as background for this page)

A visit to Villa dei Volusii is an opportunity to see a catalogue of the floor mosaics which were in fashion in Rome. They were most frequently black and white ones. Their possible monotony was avoided by an enormous variety of patterns which very often created an optical effect, as in the case of that in the Lararium which brings to mind a floor mosaic at Ostia. 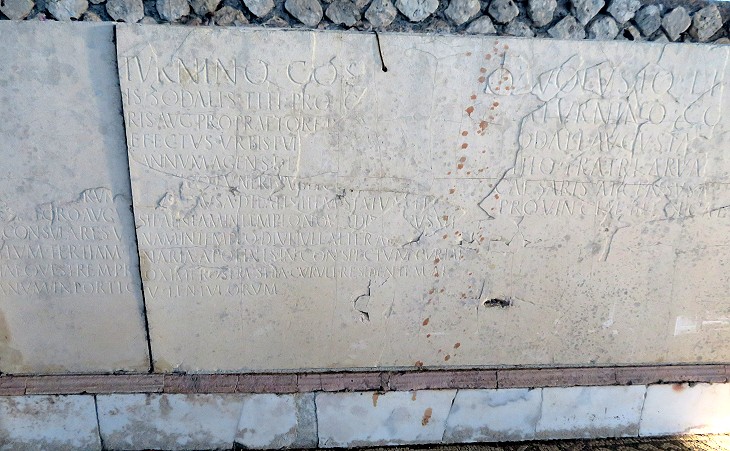 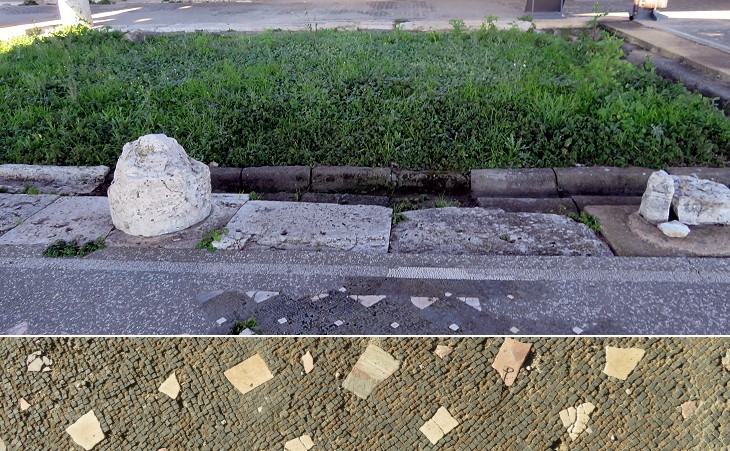 (above) Atrium of the residential building; (below) detail of the mosaic surrounding it.

Opus sectile is a form of marble inlay which became popular during the Late Empire for the decoration of floors and walls (e.g. at Domus dell'Opus Sectile at Ostia). It started from the insertion of irregular marble chips in a large black mosaic, in an apparent haphazard matter. Some Roman authors refer to it as opus lithostroton, after a Greek word meaning floor of stones. It can be seen also outside Rome, e.g. at Narbonne. 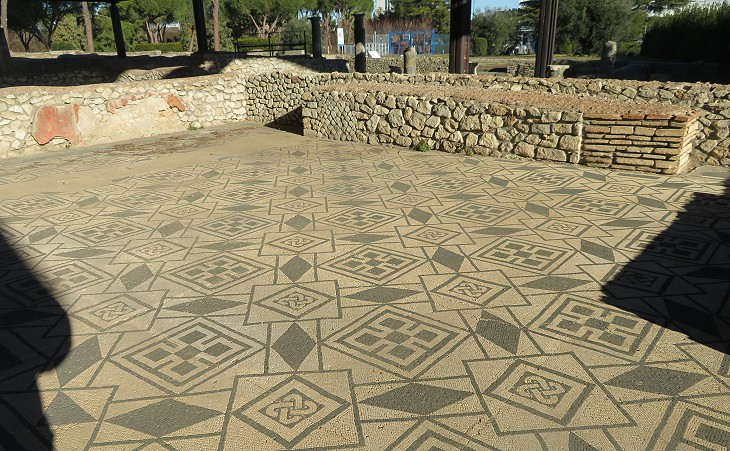 Floor mosaic in a large hall of the residential building

The majority of the black and white floor mosaics of the residential building are dated 10 BC-20 AD, so they are roughly contemporary to those at not so far away Villa di Livia; the main difference between the mosaic decoration of the two buildings is that at Villa dei Volusii they are based on strictly geometrical motifs, whereas at Villa di Livia there are also many figurative subjects. 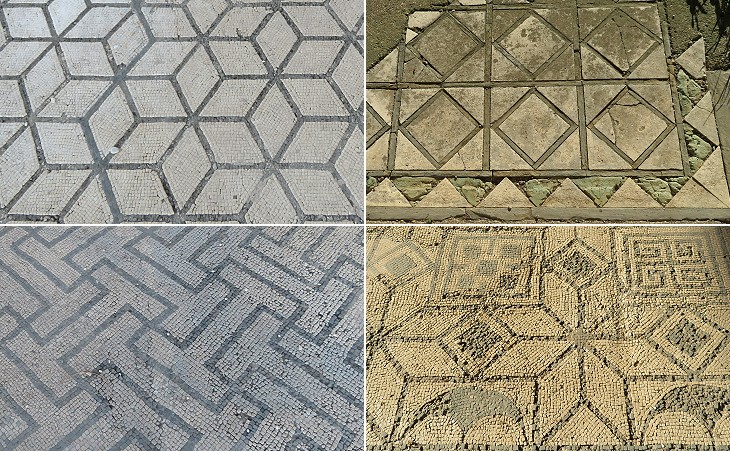 There is almost not a room with the same floor mosaic of another one, something which occurs also in the Hospitalia of Villa Adriana. Some of the geometric patterns at Villa dei Volusii can be observed also at Ostia (e.g. Caseggiato delle Pareti Gialle and House of Apuleius). 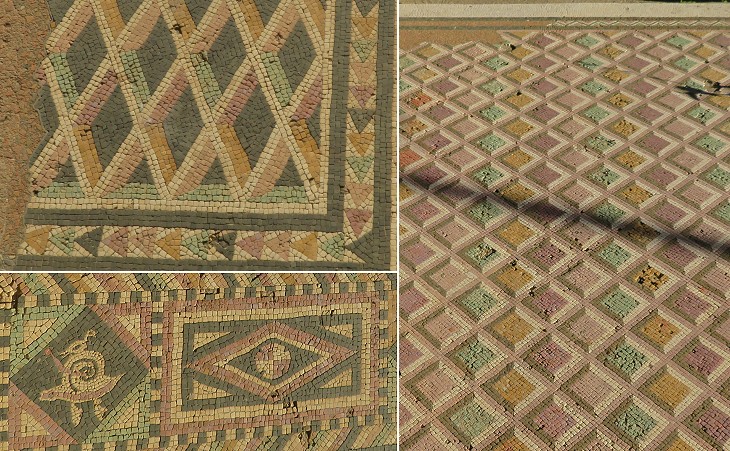 In general polychrome floor mosaics are believed to have become popular after the black and white ones. Villa dei Volusii shows that this is not always true. Archaeologists found elaborate polychrome mosaics at a depth of one foot under the general ground level of the villa. They are dated ca 60-50 BC, so they were made before the villa was acquired by the Volusii.
Unfortunately the floor mosaics are the only decorative element of the villa which survived to the present day; it is very likely that the choice of the patterns of the floor mosaics was influenced by the decoration of the walls and of the ceilings and by the presence of statues or other marble pieces.
You may wish to see the coloured floor mosaics which decorated Villa del Casale in Sicily. 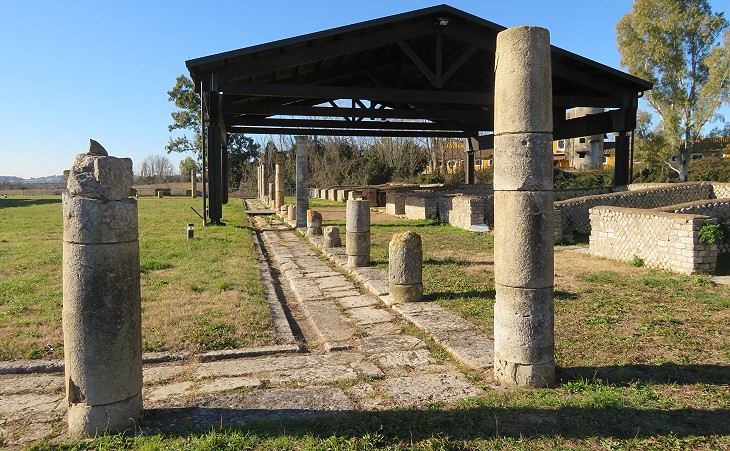 The first archaeologists who excavated the western section of the villa found a long series of small rooms with no signs of decoration and probably with a timber roof; they thought that they had unearthed a rare example of ergastula, the cramped lodgings of rural slaves which are mentioned by Juvenal (Satire 8). Their opinion was supported by other archaeologists, but not by all of them. The latter point out that the landlords would have removed the Lararium from its location at the centre of the ergastula, had these housed hundreds of slaves; they suggest the small rooms were used as warehouses and as lodgings for a limited number of servants who worked at the villa. The Italian word ergastolo means life imprisonment and derives from the Latin one; it is associated with painful living conditions and forced labour. 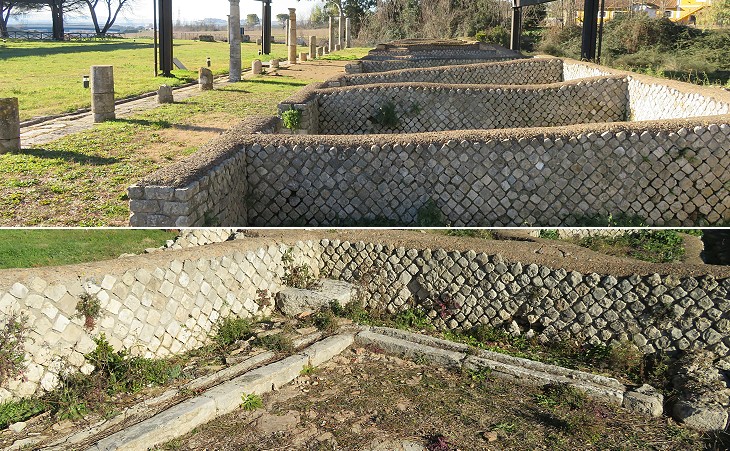 (above) "Ergastula"; (below) latrine at the end of the "ergastula"

Return to page one (Introduction, Riano and Castelnuovo di Porto) or to page two (Morlupo and Leprignano/Capena) or to page three (Lucus Feroniae).