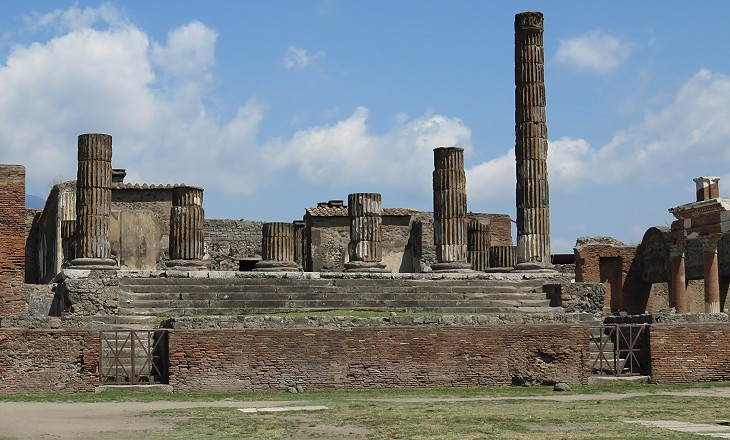 This temple was the Capitolium of Pompeii, i.e. the temple dedicated to Jupiter, Juno and Minerva, the three gods who were worshipped on the Capitol Hill in Rome. Official celebrations, such as the anniversary of the foundation of Rome, took place in this temple. In essence its purpose was not a religious one, but it indicated the town's loyalty to Rome. Similar temples have been found throughout the whole Roman Empire (you may wish to see the unique Capitolium of Sufetula in Tunisia). 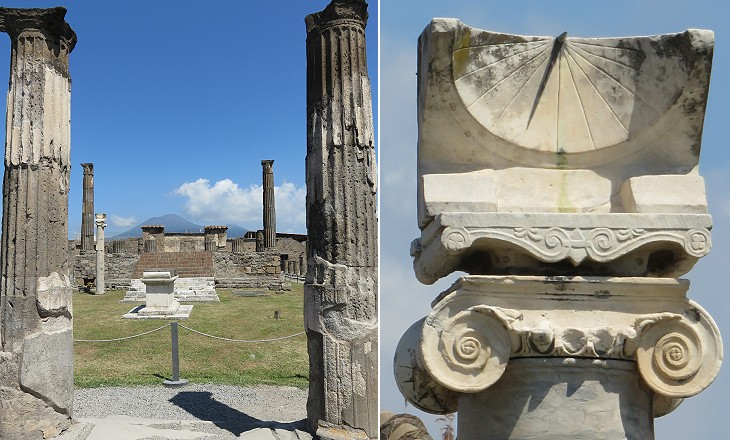 (left) Entrance to the Temple to Apollo; (right) a sundial

The Temple to Apollo was most likely the oldest one of the town and it was dedicated to deities of the first settlers. Eventually the process of Hellenization of southern Italy led to dedicating the temple to Apollo (and to Artemis/Diana, his twin sister). The worship of Apollo was associated with predictions of the future and the temple at Pompeii was a sort of branch of the Oracle of Delphi. The building was damaged by an earthquake in 62 AD and it was in the process of being restored when Pompeii was covered by ashes in 79. It was thought to be a temple to Venus, because of the pedestal of a statue to the goddess until an Oscan, the language of the first inhabitants of Pompeii, dedication to Apollo was found on the flooring. (left) Temple to Apollo; (right) copy of a statue of Artemis/Diana (original in Naples)

Already in 1787 J. W. Goethe noted that Pompeii was plundered by the excavators. For a long time activities at archaeological sites were aimed at finding statues for the private galleries of the rich and the powerful. Many statues unearthed at Pompeii were used to embellish the Palace of Caserta and other royal residences. Today most of them are at the Archaeological Museum of Naples (you may wish to see the statue of Apollo found at this temple - it opens in another window), but some were sold on the antiquarian market. Sir William Hamilton (1730-1803) was the British Envoy to the Kingdom of Naples from 1764 to 1798. He was a renowned collector of antiquities. His collection included objects from Pompeii. Part of it was bought by the British Museum in 1772. Other objects were donated by Hamilton in the following years. Temple to Fortuna Augusti (see a 1909 painting by A. Pisa showing the side of the temple)

In most ancient Roman towns a second temple showed the loyalty to Rome, in addition to the Capitolium. It was dedicated to Emperor Augustus or more generally to the Augustans by this meaning the emperors (there were Temples to Augustus and Rome at Athens, Ankara and many other towns). Augustales were members of a college in charge of organizing ceremonies in honour of the imperial family. It was a membership which granted a high social status. You may wish to see the buildings where they had their meetings at Herculaneum and at Ostia.

Temple to Genius Augusti (or to Vespasian)

The Temple to Vespasian was most likely dedicated to the imperial family when Vespasian was the incumbent emperor. He died in June 79 and the Vesuvius eruption occurred in August of that same year, but the statue of the emperor and the dedicatory inscription had not yet been changed. The temple was erected at the initiative of Mamia, a priestess whose tomb was found outside Porta Ercolano. 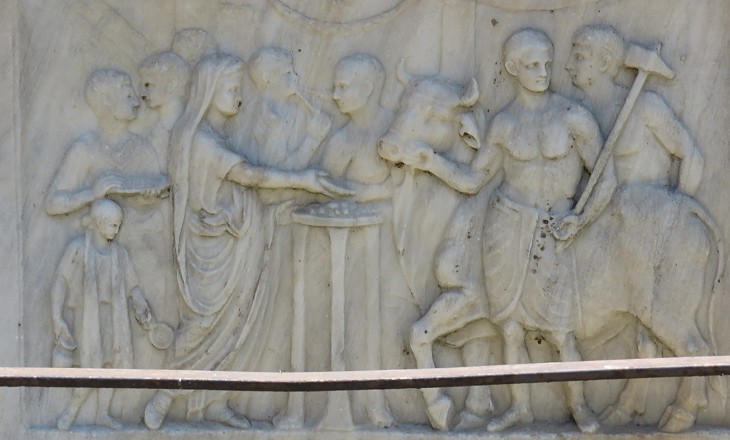 Altar of the Temple to Vespasian

A good quality relief shows a typical Roman sacrifice. Suovetaurilia, the most important one, implied the sacrifice of a pig, a ram and a bull. In this relief only a bull is sacrificed (to Mars) as part of a purification ceremony or to propitiate the successful completion of a military campaign (as in a relief on Arco di Costantino in Rome). The person presiding over the ceremony covered his head with his cloak. In Rome this duty was performed by the Pontifex Maximus. He was not a priest strictly speaking, but a politician. Emperor Augustus held this title in 12 BC and all the emperors held it after him (you may wish to see a statue of Augustus as Pontifex Maximus or read his dedication of an obelisk as Pontifex Maximus). The outward appearance of the temple is simplicity itself; its architecture slight, and without any pretensions to the grandeur or solidity of those places of worship which were dedicated to the great national deities; the votaries of the Sabine Isis, as she is named in an inscription still fixed in the wall, were ambitious only of erecting a small neat sanctuary, not a grand fabrick, as perhaps the earthquake, which did incredible damage in Campania in the reign of Nero, had affected their fortunes too sensibly to allow of a more expensive undertaking. (..) The penetrale of the temple is a small pavilion raised upon steps, under which is a vault that may have served for the purposes of oracular imposition.
Henry Swinburne - Travels in the Two Sicilies - 1777-1780
O Isis and Osiris - a famous aria of The Magic Flute is believed to have been inspired by Mozart's 1769 visit to this temple, one of the most complete surviving buildings in Pompeii. Its discovery had an immediate impact on artistic culture. The temple was entirely rebuilt after the earthquake, so its elaborate decoration can be dated with precision. It was surrounded by a high wall with only one entrance, an indication that access was reserved to the initiates. 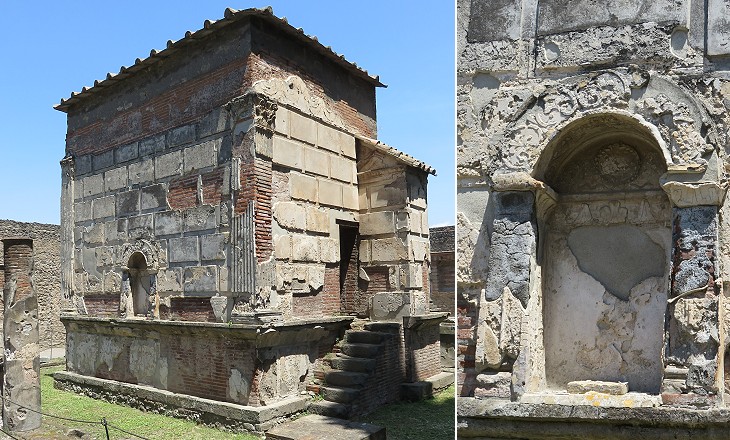 (left) Rear of the Temple to Isis; (right) niche which housed a statue of Dionysus

A priest of Isis who had lived before the conquest of Egypt by Alexander the Great, would have been amazed (or horrified) by a visit to this temple. Isis and Osiris in the Greco-Roman world were associated with other deities. Osiris was more often combined with Jupiter and called Serapis, and Roman emperors built many temples to Serapis as at Pergamum. In this temple Isis' husband was associated with Dionysus/Bacchus, a son of Apollo, so not one of the Twelve Olympian Gods, who nevertheless was worshipped more than his father in many parts of the Roman Empire. Isis herself was associated with Demeter, the Greek goddess of fertility who presided over the initiation rites held at Eleusis, a town near Athens. 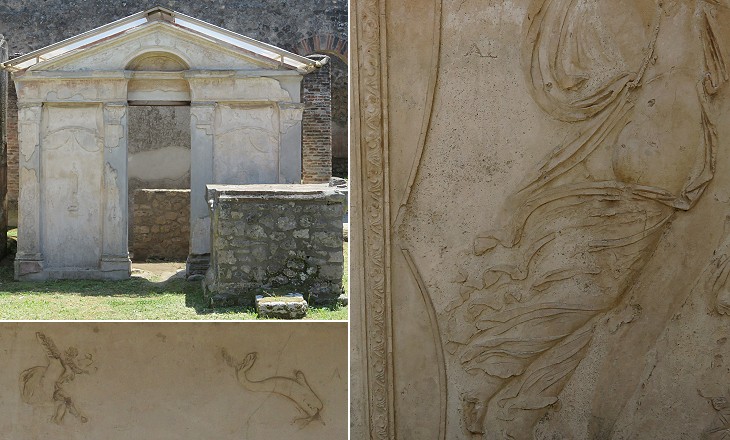 The walls are covered with ornaments in stucco executed in a coarse manner; the inscriptions and paintings have been cut out of this as well as other buildings of Pompeii, and removed to Portici for greater safety, but they have left disagreeable vacancies that disfigure the walls. Swinburne
The frescoes which decorated the complex were removed and are now in Naples. The buildings retain most of their stucco decoration, in particular the purgatorium, a separate chapel with a basin for ritual ablutions meant to cleanse the initiates. 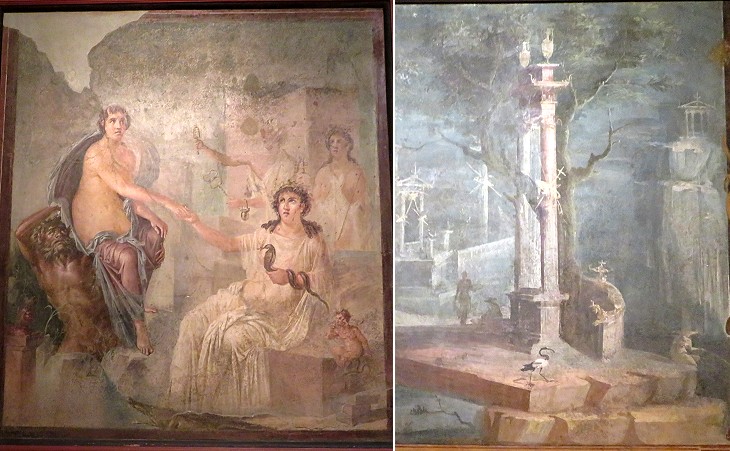 Archaeological Museum of Naples: paintings from the Temple of Isis: (left) Isis, as a personification of the Nile, greets Io; (right) detail of a landscape with an Egyptian sacred ibis

The following Prayer to Isis shows the powers which were attributed to the goddess: O holy and blessed dame, the perpetual comfort of humane kind, who by thy bounty and grace nourishest all the world, and hearest a great affection to the adversities of the miserable, as a loving mother thou takest no rest, neither art thou idle at any time in giving thy benefits, and succoring all men, as well on land as sea.
The Metamorphoses (or The Golden Asse) by Lucius Apuleius (IInd century AD) - Book XI - Translation by William Adlington (1639 edition). 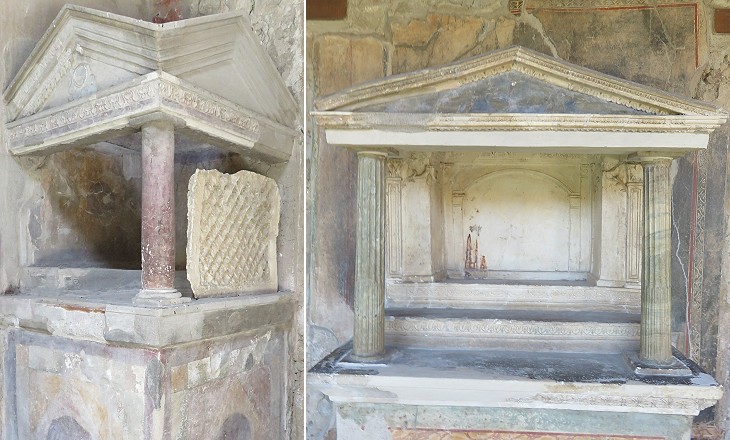 "Lararia", altars to the Lares at House of Menander (left) and at House of the Golden Cupids (right)

The Romans were indebted to Greece, Egypt and other Mediterranean countries for having "imported" their gods. They continued however to faithfully worship the Penates and the Lares, their ancient household deities. In each house, shop or workshop a small altar was dedicated to them. For the coming of age of a boy or the wedding of a young daughter the protection of these deities was asked for by placing the first beard or a doll on their altars. It was a worship without priests and formal ceremonies, which shows the simple nature of religious practices in the early Roman society (see other lararia at Ostia and at Villa dei Volusii, in the environs of Rome). 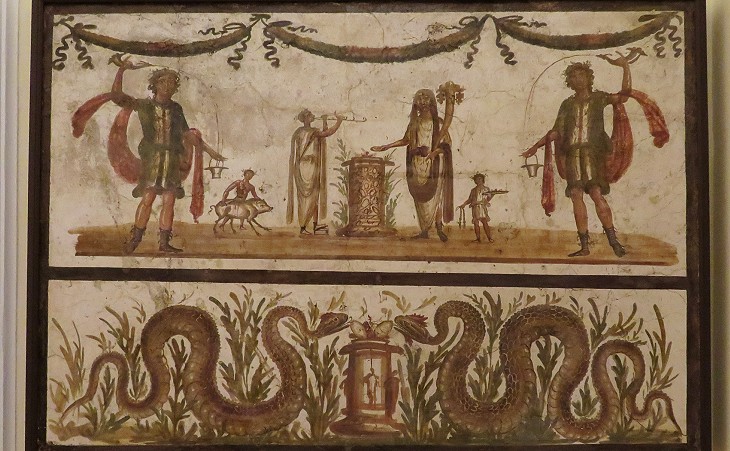 Archaeological Museum of Naples: altar to the Lares in House VII.6.3 which was destroyed by Allied bombings in August 1943

The painting portrays two Lares (young men pouring wine from a horn into a bucket with great dexterity) at the sides of a scene of sacrifice to which a musician with a double-flute takes part. In the lower section of the painting, two snakes (bringers of prosperity and abundance) are about to reach eggs which have been placed on an altar as a votive offering for them. 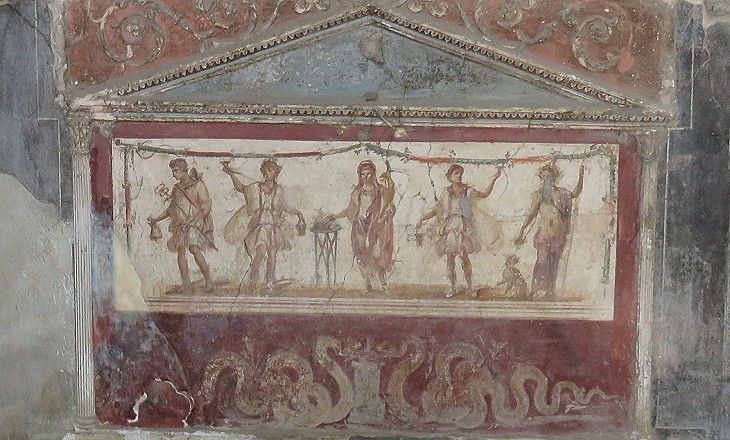 Fresco at the thermopolium (tavern) of Lucius Vetutius Placidus

This fresco at the tavern of Lucius Vetutius Placidus shows the deities the owner of the tavern relied upon for the protection of his business. Genius, the divine element which is present in each person, place or object is portrayed at the centre. It can be compared to a guardian angel. When referring to a place (genius loci) such as a wood or a river it can be a deity of its own. Genius is flanked by two Lares. Because of his business Vetutius Placidus relied upon Mercury (far left), patron of tradesmen in general, and Dionysus (Bacchus) (far right), god of wine. The lower part of the fresco shows again the two serpents of the previous painting. 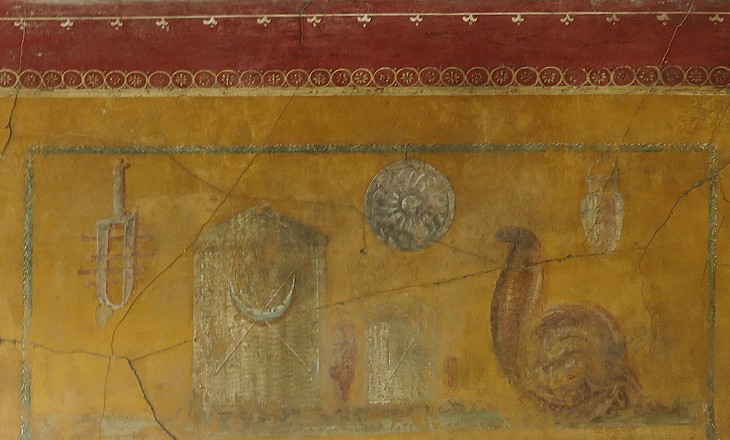 House of the Golden Cupids: symbols of Isis; the first to the left is a "sistrum", a musical instrument

The landlords of the House of the Golden Cupids had an altar dedicated to the Lares, but they had a painting depicting symbols of Isis at the opposite corner of the tablinum, an open hall of the house. The religion of the Romans and to a great extent that of the Greeks did not focus on an afterlife. Gods were immortal and men were mortal. The concepts of prize or punishment for one's deeds on the Earth existed, but they were not paramount. The religions of the Eastern Mediterranean countries and chiefly of Egypt had elaborated extensively on the concepts of an afterlife and when the Romans conquered these countries they were intrigued by their religious beliefs. 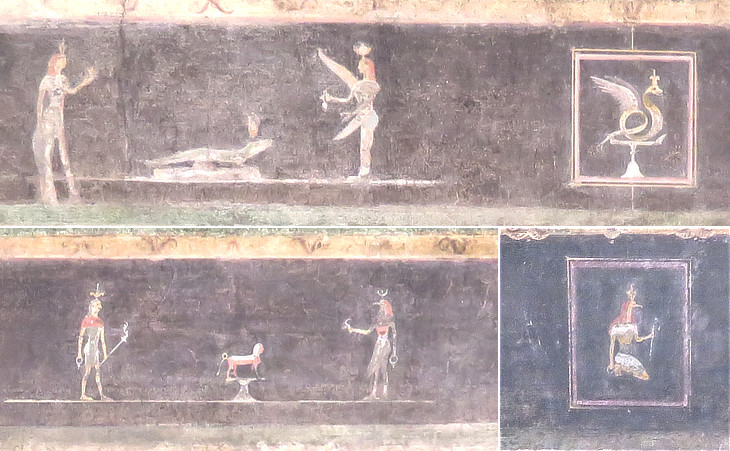 Villa of the Mysteries: details of wall paintings in the "tablinum" depicting Egyptian subjects

The Roman interest in Egyptian culture is reflected also in some miniature paintings at suburban Villa of the Mysteries, which is best known for its large paintings depicting Dionysiac subjects. 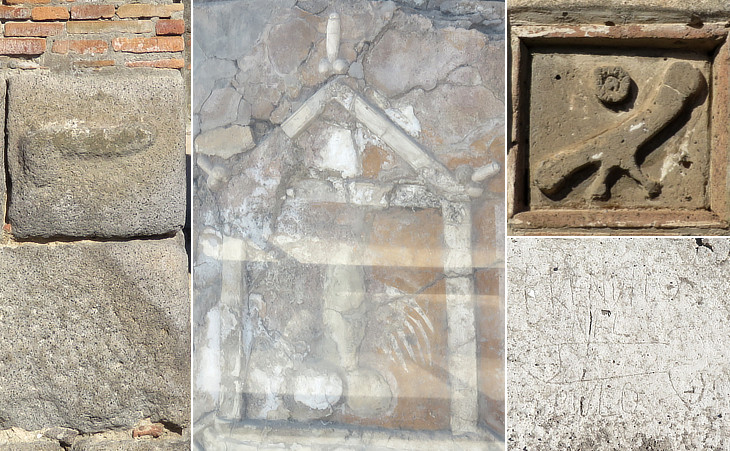 Reliefs depicting phalli: (left) near the Central Baths; (centre and right-above) along Via dell'Abbondanza; (right-below) at the northern end of Via Stabiana (a very modern one)

Of South Italian superstitions the most prominent is that of the Jettatura, or Evil Eye, which has been handed down from classical times. (..) A number of antidotes are in requisition against the Jettatura. (..) The most popular antidote is a little coral hand with one finger stretched out (..) with which the shops of Naples are filled. (..) At Pompeii an occasional phallus indicates the superstition of the evil eye.
Augustus J. C. Hare - Cities of Southern Italy and Sicily - 1891
'O cuorno 'e curallo, the coral amulet resembling a horn, derives from the reliefs of phalli which the Romans often placed on their buildings and which have been found in many parts of the Empire. They were depicted also in mosaics. The portrayal of Priapus, a fertility god had basically the same purpose as the phalli.

Move to:
The Town
Public Buildings near the Forum
Other Public Buildings
Houses
Paintings
Other Works of Art
Tombs
The Economy
Villa di Poppea at Oplontis
Pompeii in the 1909 paintings by Alberto Pisa