You may wish to see a page on the Acropolis first.

En Route to the Lower Town 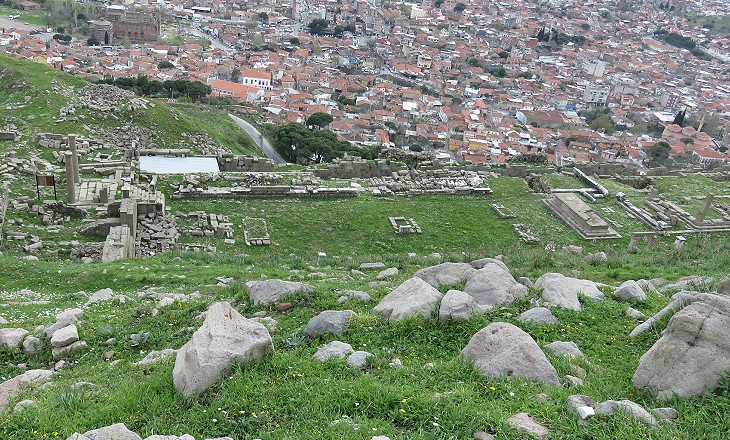 We then ascended to the citadel, an undertaking of great labour for the poor horses, and it would have been impracticable for ourselves on foot.
Francis Vyvyan Jago Arundell - Discoveries in Asia Minor - 1834
The Acropolis was surrounded by a deep ravine on three sides and it could be accessed only from the south. The Kings of Pergamum and after them the Romans entirely terraced this side of the hill to facilitate the access to the Acropolis. Archaeologists have found evidence of temples and public facilities (a theatre, a large gymnasium, a marketplace, etc.) on these terraces. More recently they have uncovered some finely decorated houses. 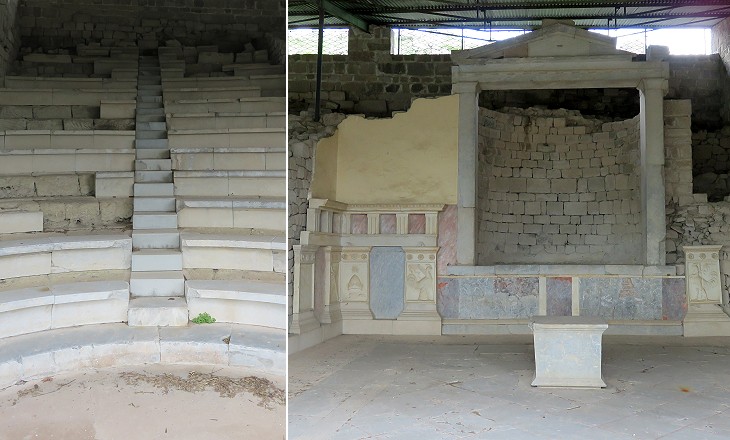 The excavations (conducted by German and Turkish archaeologists) are mainly aimed at unearthing and reconstructing the monuments as they were in the IInd/IIIrd century AD, in line with a general approach which has been followed at Ephesus and other archaeological sites. A number of small medieval Byzantine additions have been removed. The small odeon shown above and an adjoining finely decorated hall were part of a bath/gymnasium complex. In the hall archaeologists have found a head of Diodoros Pasparos (now at the Archaeological Museum), a local magistrate/politician who served his native town during the Mithridatic Wars (88-63 BC). 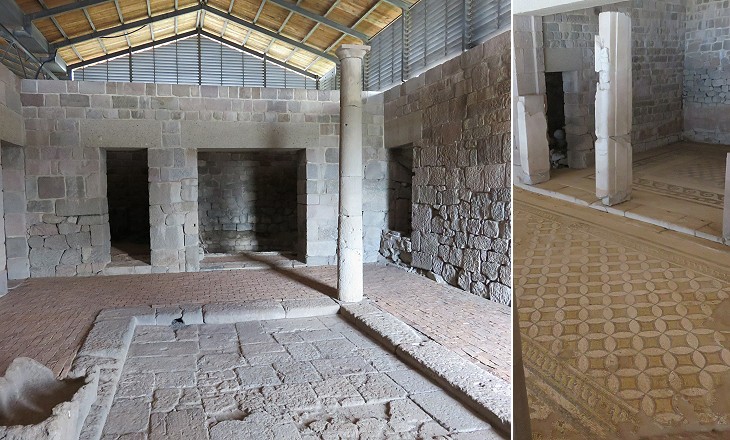 Building Z aka House of the Theatrical Masks

This building was excavated in 1990-1999. Its fine mosaics and other decorations led to the construction of a shelter which was inaugurated in 2004. Because of the lack of inscriptions the building is still known by the letter which initially identified it, but archaeologists suggest it was a kind of state guest house. 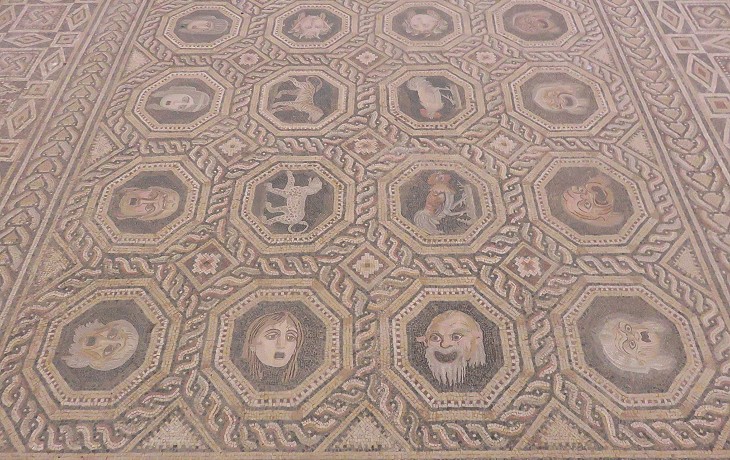 The complex was initially built in the IInd century BC, but its interior was thoroughly renovated in the IInd century AD. Apparently its use was discontinued shortly after the completion of its most interesting mosaic, perhaps because of an earthquake which struck Pergamum in 178. The masks suggest that the hall most likely housed ceremonies in honour of Dionysus, god of wine and theatre.

(left) Byzantine tower; (right) arch leading from the Gymnasium to the Lower Town which became one of the gates of the Byzantine walls

The half-way space of the hill is defended by an outwork of embattled wall of considerable extent, with frequent towers. A little above is a platform, intended as a battery, built entirely of marble fragments, columns, cornices, and other ornaments, cemented in beds of mortar.
James Dallaway - Constantinople Ancient and Modern with Excursions to the Shores of the Islands of the Archipelago and to the Troas - 1797
In 716 Arab armies on their way to lay siege to Constantinople sacked Pergamum. In ca 740 the Byzantines managed to recover their territories in Anatolia and they began to build major fortifications at Pergamum and elsewhere by using the abandoned monuments of the ancient towns. 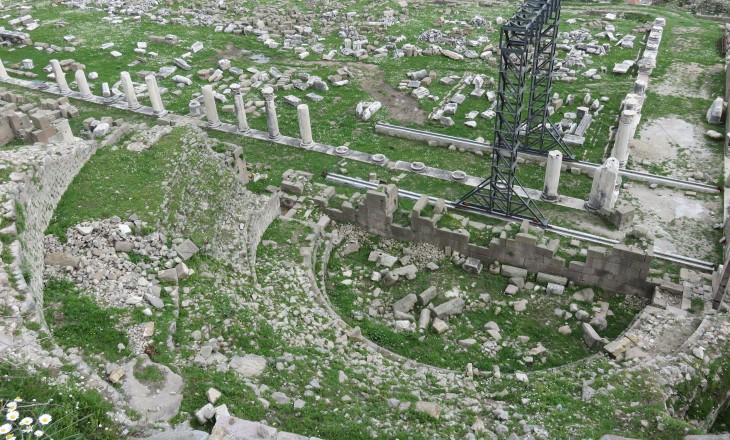 Theatre in the Upper Terrace of the Gymnasium

Archaeologists eventually found out that behind the Byzantine walls lay a very large gymnasium which was built on three adjoining terraces (for children, boys and teenagers) along the slope of the hill. Its upper terrace housed a theatre (other theatres were on the Acropolis and at the Asklepion). 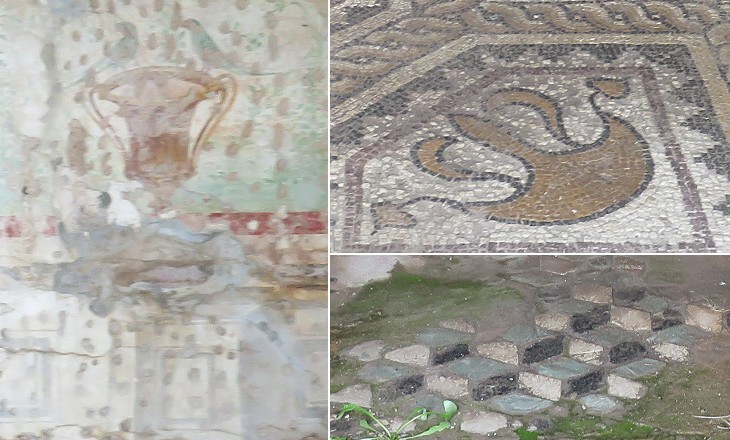 Fresco and floor mosaics in a building in the Agora

Today 80% of the visitors to the Acropolis go there and return via an aerial lift of the gondola type (it opens in another window). Thus very few of them visit the monuments of the lower part of the hill which as a consequence do not appear to receive the same degree of management attention as those on the Acropolis. A large agora (marketplace) has been unearthed at the very foot of the hill. Owing to its position it was easily accessible from the Lower Town, but today this is not the case because the archaeological area does not have an entrance there. 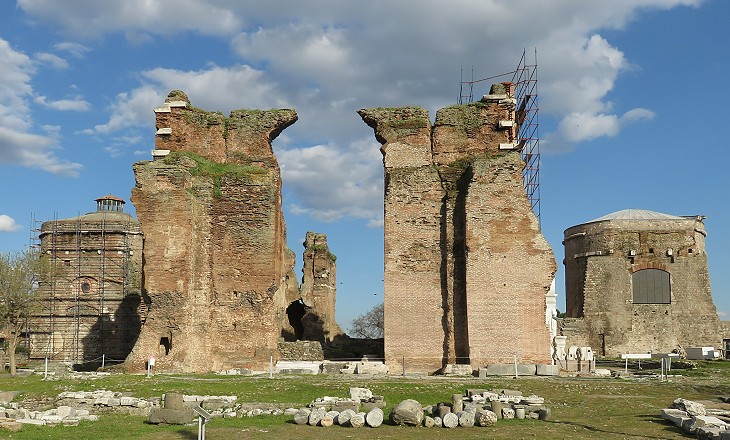 On entering the town, now nearly dark, I was struck by some enormously high masses of walls on the left, strongly contrasted with the diminutive houses beneath and around them. I heard subsequently that they are the remains of the church of the Agios Theologos or St. John.
Francis Vyvyan Jago Arundell - A Visit to the Seven Churches of Asia - 1828
There is in the middle of the city a ruin of such extent that it can have been nothing less than the palace of a Roman emperor, and that worthy of an Adrian.
Charles Fellows - Journal Written during an Excursion in Asia Minor in 1838
Fellows was right in assuming that the imposing walls were built at the time of Emperor Hadrian. Previous travellers generally believed they belonged to an early Christian church.

(left) Interior of the temple; (centre) hidden access to the altar; (right) detail showing the small bricks used for the building

Most of the buildings of the Lower Town collapsed and now lie under modern Bergama, but these gigantic brick walls have withstood the ravages of time. Their thickness reminds the viewer of Caracalla's Baths.
The main building is now called Kizil Avru (Red Courtyard) due to its colour; it is flanked by two round towers, the purpose of which is still unclear.
The typical layout of an ancient temple was based on a rather small building (cella), housing the statue of the god, surrounded (totally or in part) by a portico supported by columns. Ceremonies were usually held on an altar in front of the building. In this temple the statue was placed inside a hall which could contain a large crowd, a sign that in the IInd century AD religious ceremonies were moving away from the traditional outdoor rites in order to be celebrated for an audience of initiates behind closed doors.
A gigantic hollow statue of the god stood on a high podium: a secret passage allowed access to the interior of the statue, from which a priest made the god speak (see a hollow oracular statue in Rome).

(left) One of the two tunnels through which the River Selinus flows under the terrace of the Temple; (right) pillar/statue having Egyptian features (in 2006)

The temple and its ancillary buildings stand on a wide terrace above the river which crosses the Lower Town. This was most likely done on purpose because water played a major role in the design of the complex. Two pools have been identified between the towers and the temple, the interior of which was divided into two sections by a water channel. The presence of water could be a reference to the River Nile, which seem to be confirmed by the finding of pillars decorated with figures in Egyptian costumes. Archaeologists believe the temple was dedicated to Serapis, a god whose worship was first promoted by the Greek Ptolemaic pharaohs to integrate the Egyptian religion with their own. Serapis had features of both Zeus and Osiris.
Hadrian placed a statue of Antinous, his favourite, dressed as an Egyptian god and other Egyptian-like statues in the Serapeum of Villa Adriana (now in the Vatican Museums). 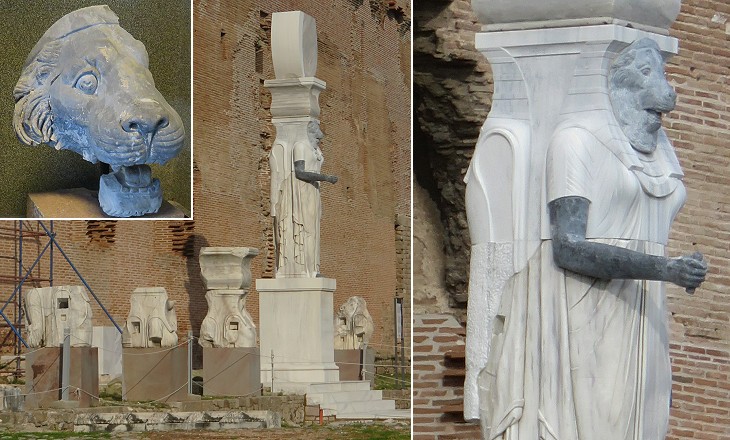 Statues assumed to be the ones which were worshipped in the temple (in April 2015); (inset) head of a lion found at the Temple to Serapis and now at the Archaeological Museum

We were fatigued, but re-invigorated by a good breakfast, we walked to the mass of building with the circular towers, and (..) decided that it was the temple of Esculapius.
Francis Vyvyan Jago Arundell - Discoveries in Asia Minor - 1834
Once the process of building a set of new statues is completed, the error made by Arundell will have become impossible. I daresay however that the already reconstructed statue is rather puzzling, because of the unusual link established between the naturalistic head of a Greek lion and the rigid posture of an Egyptian statue 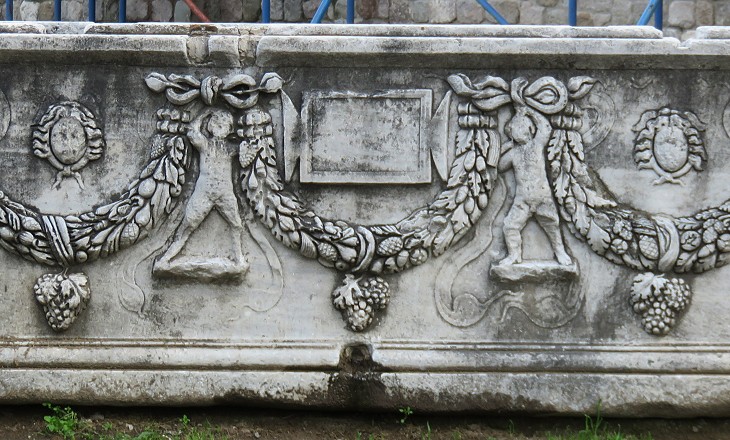 Roman sarcophagus in a garden to the rear of the temple

By wandering in the fenced area around the temple one can see some interesting sarcophagi and reliefs of the Roman period and in addition find evidence that in the following centuries the site housed a Byzantine church, a Jewish cemetery and several Ottoman buildings, including a mosque. 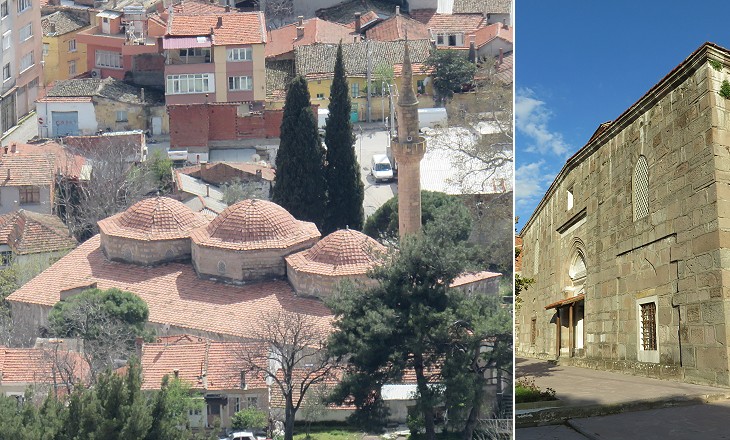 In the XIVth century Pergamum was conquered by the Karasids, based in today's Canakkale, who were soon replaced by the Ottomans. The town however had lost most of its ancient importance in favour of Manisa and Smyrna (Izmir). Today it is part of the Province of Izmir at the border with the Province of Manisa. The main Ottoman monument of the town is a mosque built in 1399 by Sultan Beyazit Yildirim. The layout of the building is best seen from the Acropolis. Its portal is unusual in the sense that its decoration is based on classical mouldings (most likely made up of pieces from ancient buildings) rather than on the muqarnas of the Islamic tradition.

Ulu Camii: detail of the portal

Move to:
The Acropolis
The Asklepion
The Archaeological Museum