You may wish to see pages on the town and the Asklepion first. 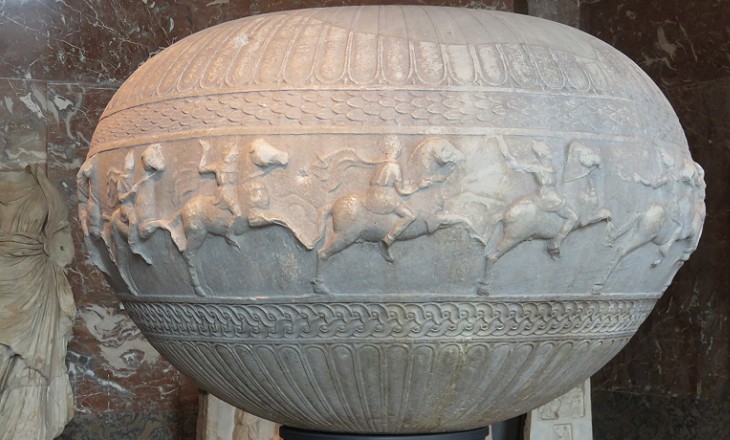 Louvre Museum in Paris: funerary vase of the IInd century BC found at Pergamum (a gift of Ottoman Sultan Mahmut II to King Louis-Philippe in 1837)

Muhammad Ali Pacha, born at Kavala in Greece in 1769, is regarded as the founder of modern Egypt. In 1805 he managed to be appointed governor of the country by Sultan Selim III, but his ultimate goal was to establish an independent kingdom for himself and his successors. In order to achieve his aim he needed the support of France and Britain. In 1833 he donated to King Louis-Philippe of France the obelisk which now stands in Place de la Concorde in Paris. At that time he was at loggerheads with Sultan Mahmut II, who, in order to improve his own relations with France, decided he had to make a similar "archaeological" gift. 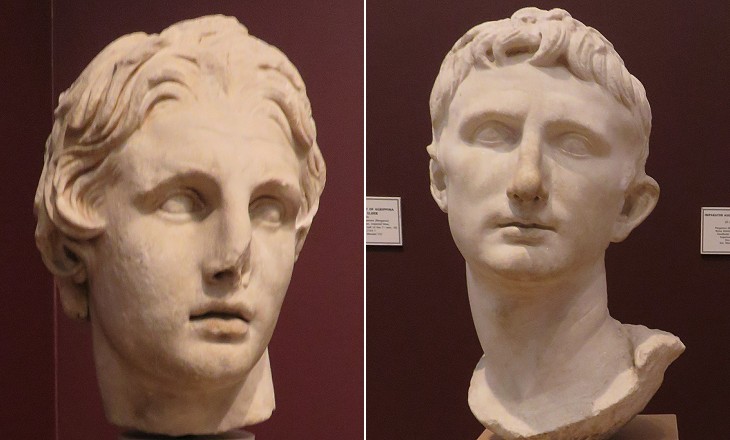 In 1869 the Sultans founded an Archaeological Museum at Constantinople and some of the works of art found at Pergamum by German archaeologists were sent there, whereas many others were shipped to Berlin. The collections of the Archaeological Museum of Istanbul continued to be enriched with findings from all the Ottoman Empire until 1923, when the Sultan was deposed and the capital was moved to Ankara. 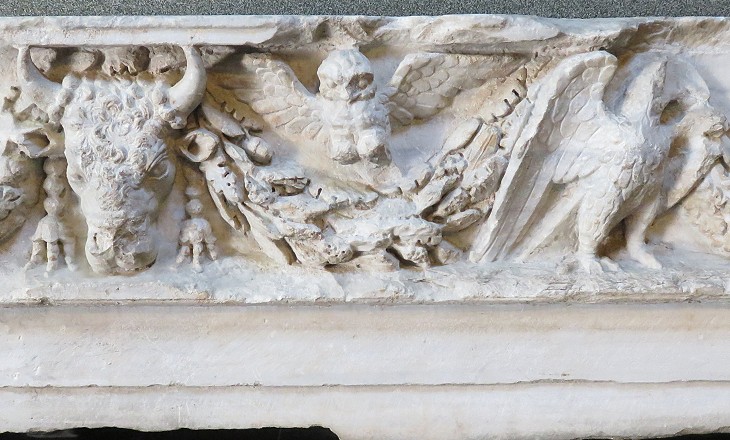 Frieze from the Terrace of the Temple to Athena Nikephoros (IIIrd century BC). The little owl is a symbol of the goddess (on one occasion I spoke to it)

Eventually in 1936 the Archaeological Museum of Bergama was inaugurated and since then all the works of art which were removed from the ancient monuments were no longer sent to other places, but were kept in this museum on the main street of the modern town. 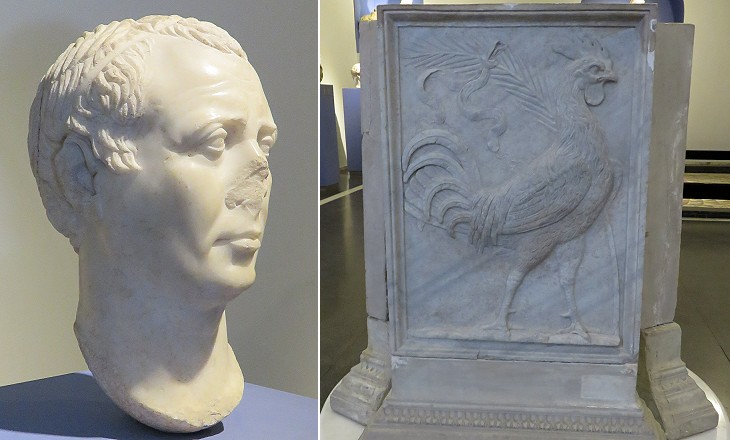 The hairstyle of Diodoros Pasparos is that which was fashionable in Rome at that time and which can be seen in portraits of Emperor Augustus as that shown in this page.
The cock and the two snakes were animals sacred to Asklepios. They may indicate that the relief was dedicated to him. The Aesculapian snakes were tree snakes of the Colubridae family, so they were depicted hanging from a palm frond. 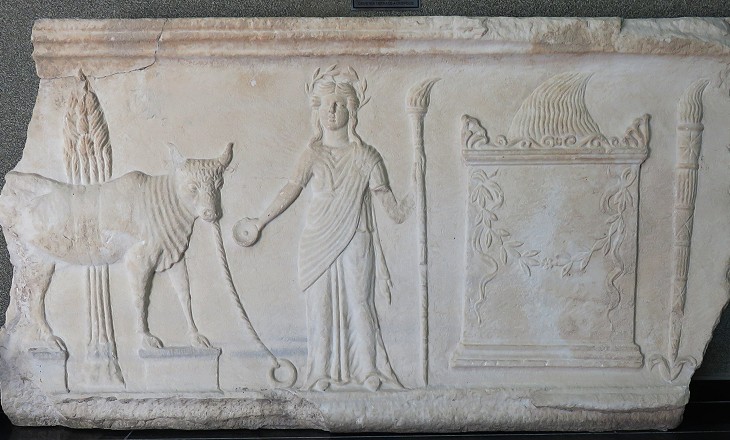 Relief depicting a sacrifice (from the Terrace of Demeter)

Demeter, Greek goddess of agriculture, corresponded to Roman Ceres. In this relief she was portrayed with some typical elements of her iconography: a torch and a wreath on her head. We know that Attalus I, King of Pergamum from 238 to 197 BC attended the rites of the Eleusinian mysteries during which Demeter was worshipped. There is no scarcity of statues of Emperor Hadrian in Turkey. He visited the country when he accompanied Trajan on his last campaign and twice during his travels throughout the Empire. There is hardly an ancient town of western Turkey without a monument celebrating him or without a facility he suggested building.
In some statues he was portrayed as a military commander wearing his armour, in others as a completely naked hero or god (see those found at Perge). The statue found at the Library of the Asklepion is somewhat in-between these two patterns. Hadrian is naked, but his armour is next to him. The body is modelled after the Diadumenos, a famous Vth century BC statue by Polykleitos, of which a copy was found at Delos, but the muscles are more "sculpted". 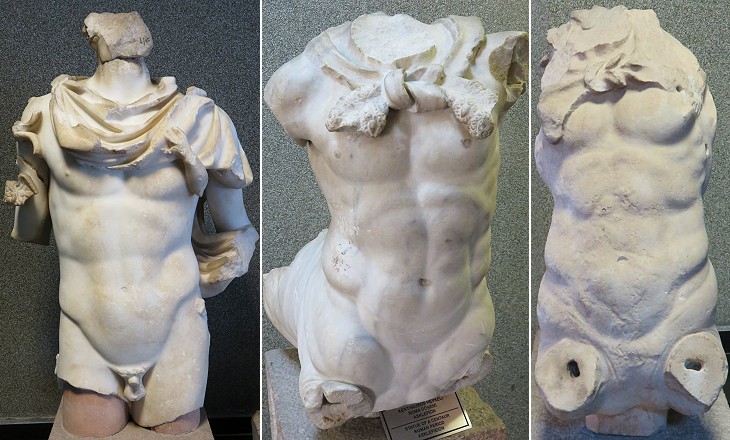 Statues of Hermes (with a hand of infant Dionysus he is bearing on his back) and two centaurs; all from the Asklepion (IInd century AD)

The Asklepion was largely redesigned and decorated at the initiative of Emperor Hadrian. The statues which were found there are similar to those which decorated nymphaea (fountains) and other monuments of the same period in the region. That of Hermes is similar to one found at Side and the centaurs recall the Furietti Centaur and tritons found at Byzantium and at Ephesus. 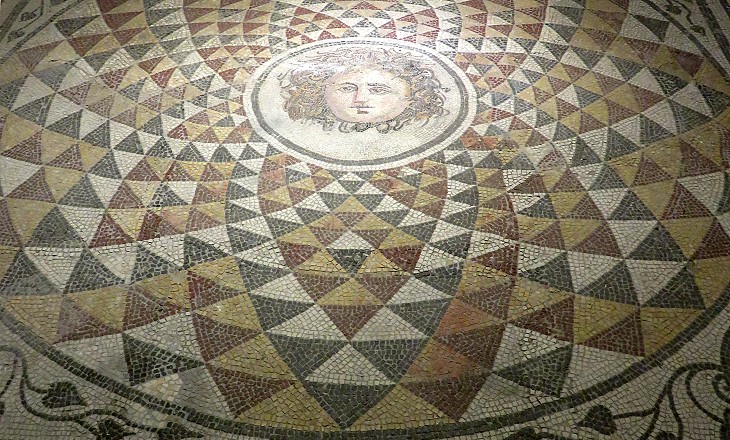 Similarities among statues found in towns of western Turkey are often explained by the fact that workshops in four or five towns (e.g. Afrodisias) provided sculptures to the whole country. It is less easy to explain similarities between mosaics found in Turkey and those found in Tunisia. A "vortex" coloured mosaic almost identical to that found at Pergamum can be seen at Thapsus. 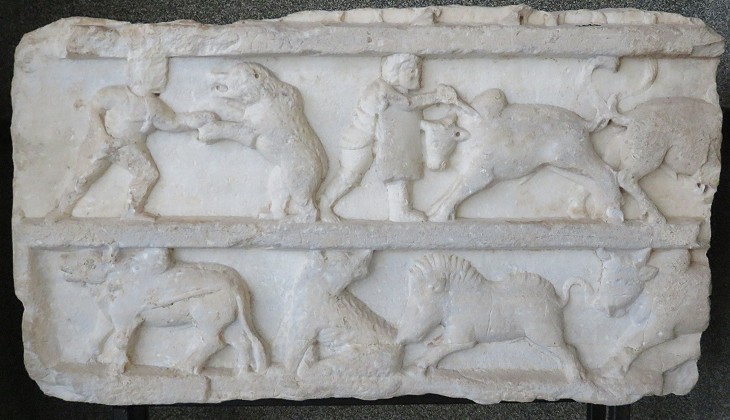 Relief depicting "venationes", fights with beasts (from the Temple to Serapis)

The temple was built in the early IInd century AD, but this relief was most likely made a couple of centuries later, because of its execution and because gladiatorial combats were replaced by fights with beasts during the Late Empire. A scene of the relief depicts a bullfight which seems a forerunner of Spanish corridas, especially in the way it shows the gladiator delivering the final blow between the base of the skull and the top of the spine. 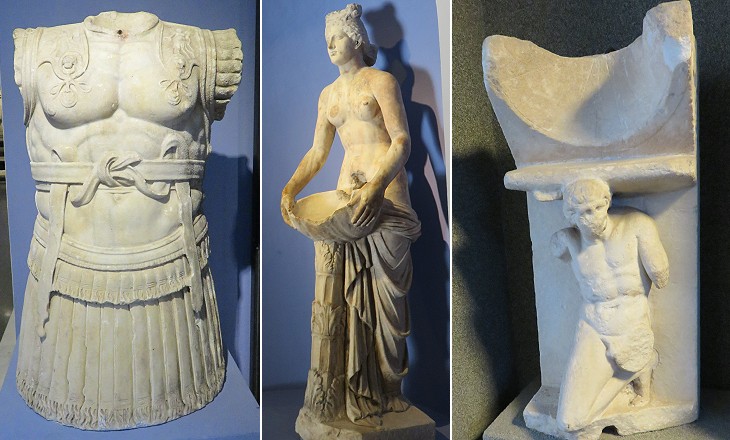 (left) Armour; (centre) a nymph from the Roman baths of Allianoi, ten miles north of Bergama; (right) man holding a sundial from Menemen, a port on the Aegean Sea

The town of Bergama is part of the Vilayet (Province) of Izmir (Smyrna), a city with a large Archaeological Museum. That of Bergama has only a very few exhibits which do not come from the town. The nymph of Allianoi is very similar to one found at Gortyn, on Crete.

The image used as background for this page shows an exhibit of the museum, a marble table leg depicting heads of a swan and of a dolphin.

Move to:
The Acropolis
The Lower Town
The Asklepion