You may wish to read an introductory page on the region and Philippi first. 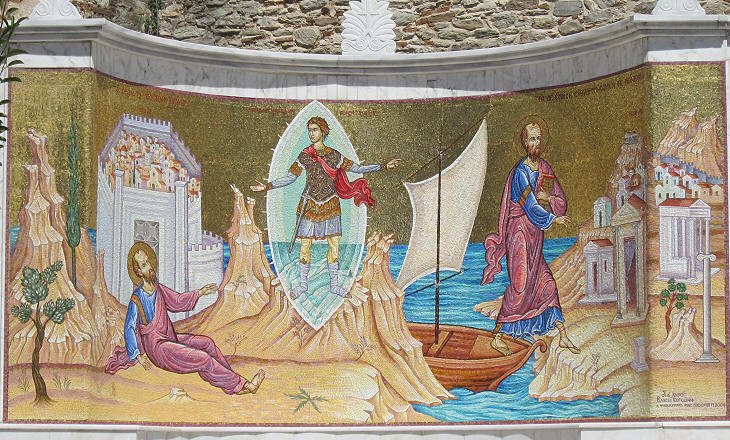 Modern mosaic portraying St. Paul landing at Neapolis on his way to Philippi (in Koundouriotou Street)

Neapolis (New Town) was a settlement founded on the mainland by the inhabitants of Thassos, an island off the Macedonian coast; it then became the port of Philippi and St. Paul landed at Neapolis on his way to that town; today's Kavala does not retain any evidence of its ancient past apart from some exhibits in the local museum. 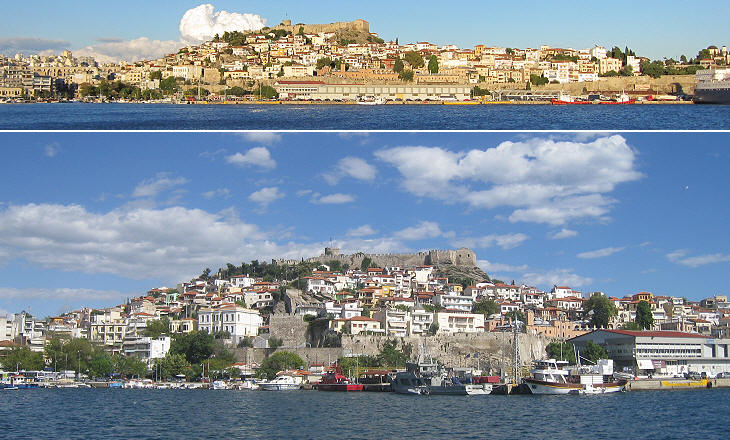 Views of the old town

Neapolis was founded on a headland projecting into the sea which could be easily fortified; at some point in time, perhaps to distinguish it from the many other ports having the same name (including Naples in Italy), Neapolis was renamed Christoupolis and a fortress was built at the top of the hill to protect the inhabitants from raids by the Bulgarians.
Towards the end of the XIVth century Christoupolis was conquered and burnt down by the Ottomans; for some time the site was abandoned; eventually the Ottomans repopulated it; according to French traveller Pierre Belon they relocated Jews from Hungary there; the Jews formed a community named after Bucephalus, the horse of Alexander the Great; Kavala, the current name of the town, is thought to derive from the name of that community; in his book Belon noted that while the town was well protected, the port did not shelter ships enough from strong northern winds. (Les observations de plusieurs singularitez et choses mémorables, trouvées en Grèce, Asie, Judée, Egypte, Arabie et autres pays estranges: rédigés en trois livres - ca 1560). 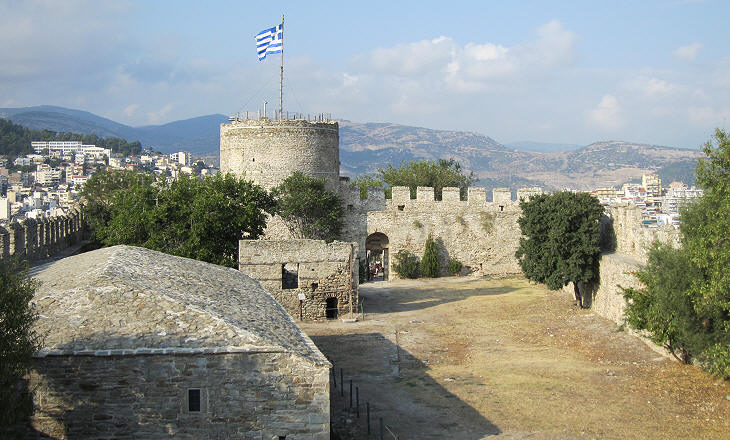 Southern section of the castle

The Byzantine walls and castle were rebuilt and strengthened by the Ottomans; a massive circular tower divided the castle into two sections one of which today houses an open air theatre. 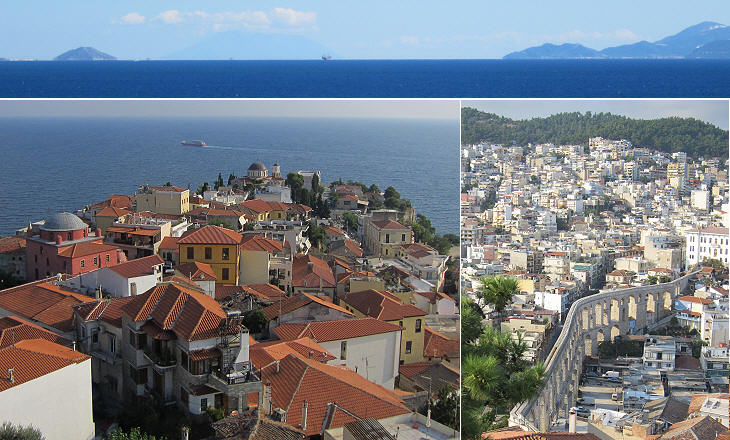 Views from the castle: (above) towards the strait between the mainland (left) and the island of Thassos (right); in the background, under a white cloud, Samothrace, another Greek island, is visible; (below-left) towards the end of the headland: (below-right) towards the mainland

With the development of tobacco farming in its hinterland Kavala became an important export port of this commodity; Turmac, a brand of cigarettes manufactured by the Turkish-Macedonian Tobacco Co. in Holland, became very popular throughout Europe. 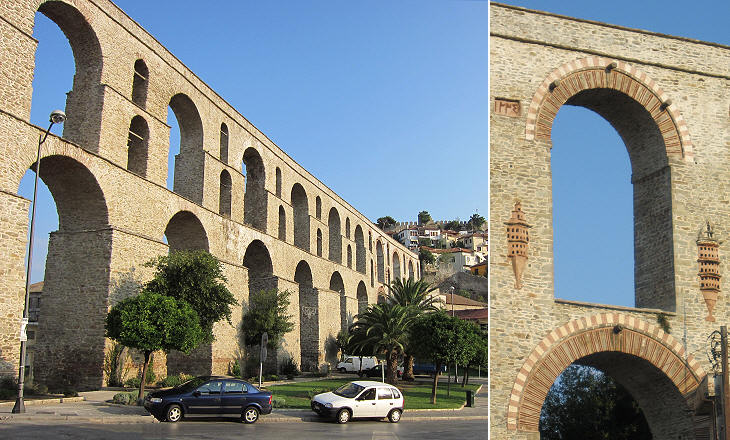 In the XVIth century an imposing aqueduct ensured an abundant supply of water to the castle and the town; it was restored in the XIXth century; it was decorated with two sets of holes for birds to nest inside, a typical example of Muslim compassion, which can be noted in many minarets and mosques (you may wish to see another example at Ibni Neccar Camii in Kastamonu). 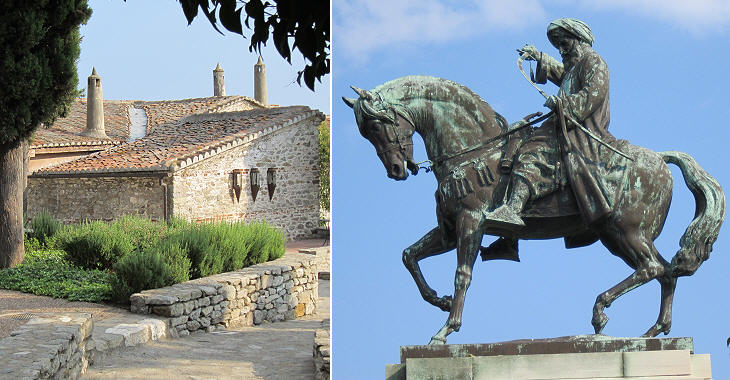 (left) House where Muhammad Ali Pacha was born; (right) monument to him

Muhammad Ali, the son of a tobacco merchant of Albanian origin, was born in Kavala in 1769; in 1805 he became the Wali (governor) of Egypt and he gradually gained autonomy from the central Ottoman government. During the Greek War of Independence he sent troops and ships to quell the rebellion and his son Ibrahim Pacha massacred the inhabitants of Psara, a small island near Chios, yet in the 1930s Greek authorities erected a monument to him with the aim of improving relations with Egypt where many Greeks lived. He is not to be confused with Ali Pacha of Tepeleni, the Albanian ruler of Epirus. Muhammad Ali Pacha did not forget his hometown and he founded a large imaret; usually this word means just a soup kitchen, but in the case of Kavala it included a hostel/hospital for the poor which could house up to 300 guests/patients. 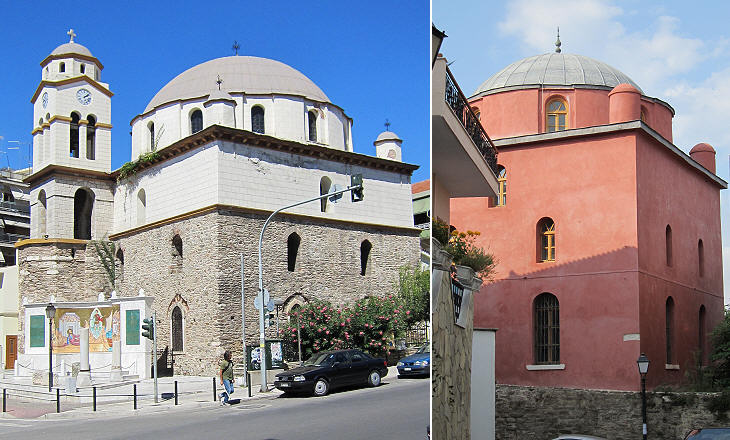 In 1923, in the frame of an agreement for the exchange of populations, the Turks of Kavala left the town and their mosques were turned into churches or used as schools or meeting halls; the mosques were relatively modern and they did not have a significant artistic or historical value. 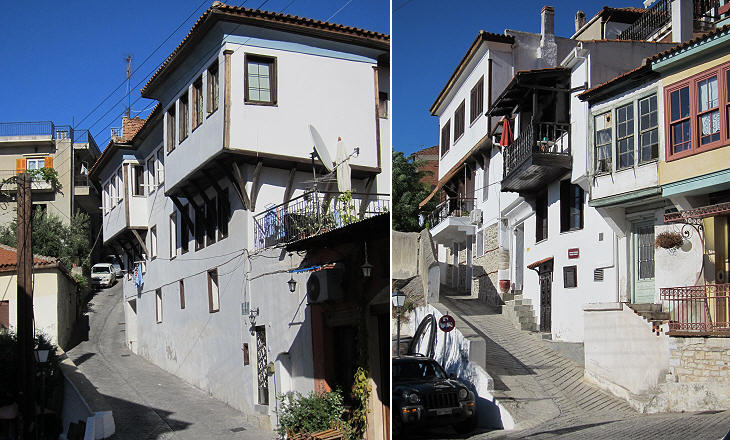 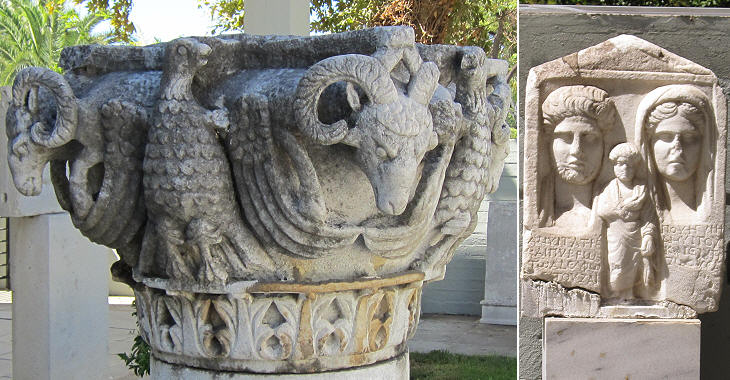