During the course of the XVIIth century the nations of Europe gradually moved towards a centralized system of government. In France this was summarized by King Louis XVI in the sentence L' état c'est moi (I am the nation) by this meaning that all power came from him. For the administration of the country he relied on members of the government, who, even when they belonged to the aristocracy, had responsibility for a function (Finance, Trade or the Army), rather than for a territory. More or less the same happened in the other European nations and it led to a greater effectiveness and stability of the government action.
The same process did not occur in the Ottoman Empire which remained organized on a territorial basis, with most provinces (sanjaks) run by governors (beys), the most important of whom were given the title of pacha (usually on military grounds). The most remote provinces of the Empire such as Tunisia and Algeria were de facto ruled by local dynasties of beys.
The different effectiveness of the government structures between the Ottoman Empire and the other European nations led to a gap between their respective military strength. The Ottomans, after their 1683 failed attempt to seize Vienna, were repeatedly defeated in the late XVIIth century and again during the XVIIIth century by Austrian and Russian armies. The rivalry between these two countries is regarded as a key factor in allowing the Ottoman Empire to survive until 1918.

The weakness of the central Ottoman government was such that even Ali Pacha, the governor of a province (Trikala in central Greece) not so far from Constantinople, felt he could carve himself a kingdom in Epirus, a region which historically included parts of southern Albania and north-western Greece and which bordered on the Ionian Sea.

Views of old Ioanina: (upper image) from Ioaninon Nissì, the island opposite the town; (lower image) from the mountain to the west of the town: in this image the citadel is visible to the right

Ali was born in Tepeleni, a town in Albania, and he served for many years as assistant to Ottoman rulers and commanders until in 1787 he was rewarded by being made governor of Trikala.
The decision of the Sultan to wage war on Austria and Russia (1787-92) ended in such a disaster that Ali took advantage of the weakness of the central government to expand his power on the nearby province of Ioanina, claiming he could restore order there; Ioanina became his main residence for the next thirty years.
The town is located on a headlong projecting into a small lake; on a miniature scale one could say it is a copy of Constantinople, which has a similar shape. Ali emphasized this resemblance by building his residence inside a citadel at the end of the promontory, positioned in the same manner as Topkapi, the Constantinople Palace of the Sultans. 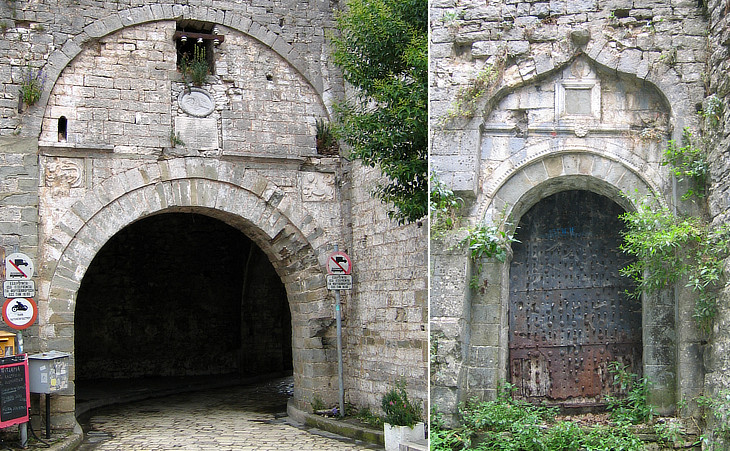 Gates of the town walls

Ioanina flourished in the XIIIth century: after the 1204 fall of Constantinople during the Fourth Crusade, it became one of the most important towns of the Despotate of Epirus, a Byzantine kingdom where many important families from Constantinople sought refuge. In the following centuries Serbs and the Italian lords of Cefalonia fought for the town, which eventually was occupied by the Ottomans in 1430.
Ali Pacha (a title the Sultan granted him in 1788) strengthened the town walls and decorated its gates with ancient reliefs: he was known as the Lion of Ioanina and some reliefs show wild beasts.

(left) Round bastion of the town walls; (centre and right) the Citadel: walls and main entrance

In addition to strengthening the walls with round bastions, Ali Pacha built a citadel at the south-eastern corner of the town. The Ottoman government was also known as the Sublime Porte after the fine gate leading to the headquarters of the Grand Vizier in Topkapi Palace. Most likely Ali Pacha had this in mind when he commissioned the gate for his citadel.

The Citadel: (left) the mosque; (right) some cannon

The palace where Ali Pacha set his residence is lost: it is said to have housed a harem of more than 300 women (wives, concubines and odalisques) in an attempt to emulate the Sultan's seraglio.
In 1913 Ioanina was incorporated into Greece and the buildings of the citadel went through many changes: in recent times they were restored and opened to the public.

In 1611 Dionysius, Bishop of Larisa, led a revolt against the Ottomans in the countryside of Ioanina. He was captured and skinned alive; the Greek community was punished by being forced to leave the old town, which after that was inhabited only by Turks and Jews. In 1922, at the end of a dramatic war, Greek and Turkish authorities agreed on a vast exchange of population and the Turks left Ioanina; in 1944 the Nazi deported the Jews.
For many years the old town was almost entirely unpopulated: this occurred in many towns of both Greece and Turkey because the refugees preferred to start a new life in the big cities, rather than in the houses vacated by the refugees of the other community. In addition the abandoned buildings were thought to be haunted and they were left to decay.
In recent decades the old town of Ioanina started to live again and the monuments of the past were restored. As a result it now has an Ottoman appearance which sometimes Turkish towns do not have any longer.

Mosques in the part of the town outside the walls

In 1797 the fall of the Republic of Venice brought Ali Pacha in contact with a new powerful neighbour: France. Napoleon Bonaparte considered using Ali Pacha as a pawn in trying to expand French influence in the Levant. Ali in turn continued this game of chess using the French in the same way. As part of this ambiguous relationship Ali Pacha offered one of his daughters to Nicolas Marie Roze, a French officer on Corfu; in 1798 open warfare broke out between the Ottoman Empire and France, owing to Napoleon's campaign in Egypt; Ali to ingratiate himself with the Sultan sent his son-in-law as a hostage to Constantinople: the unfortunate man died soon after at Yedikule.
According to the traditional account Ali Pacha punished his daughter-in-law for having resisted his sexual advances; he drowned her (with her sixteen maids). His behaviour was such that even Lord Byron who visited Ali's court in 1809 and described it in flattering terms, admitted that Ali was guilty of the most horrible cruelties. Alexandre Dumas père included him in his Celebrated Crimes book of novels.
Ali Pacha took advantage of the political situation on the Ionian Islands, which were ruled in turn by France, by an Ottoman-Russian alliance, again by France and eventually by Britain. He occupied some of the outposts Venice had on the Greek shore (Butrinto, Preveza and Vonizza). He strengthened the fortifications of these towns and built new fortresses: the castle of St. Andrew in Preveza is decorated with a relief of a wild beast very similar to that shown in the icon of this page.

In 1817 Ali Pacha bought Parga, the last Venetian outpost, from Britain; Ioanina became the capital of an almost independent state where all the Great Powers sent their envoys. He established good relations with some Greek klephts (bandits), who were seen by the Greek population as a sort of Robin Hood. Ali expanded his power on the Ionian coast of Greece south of Preveza and he thought the klephts could help him to add Peloponnese to his dominions.
Young Sultan Mahmud II became more and more suspicious of Ali. In 1820 an attempt to murder a rival pacha in Constantinople failed. The would be assassins named Ali as the plot's instigator. The Sultan summoned Ali to his court, but the old man preferred to stay in Ioanina. This refusal was seen as open rebellion and the Sultan appointed the man Ali had tried to kill as the new pacha of Ioanina and provided him with an army to restore his authority in the region. In a desperate attempt to regain the Sultan's favour Ali revealed what he had learned from the klephts about a planned Greek revolt (which eventually broke out in March 1821 in Patras and Kalamata).
Most of Ali's troops deserted him and the Ottoman army easily reached Ioanina and laid siege to the old town.
Ali Pacha managed to resist for more than one year. In February 1822 he left his fortified citadel and secretly reached Ioanninon Nissì, the island located just opposite his residence.

The island was known for its many Orthodox monasteries, where the monks secretly provided Greek children with education, thus keeping alive the country's cultural and religious heritage.
In general it is thought that Ali Pacha went to a meeting which he hoped would result in the Sultan's pardon; it is not clear whether he took the initiative or was deceived. It was a trap, after a short fight Ali was beheaded and his head was shown to the last defenders of the citadel who surrendered.
Today the monastery where Ali was killed is a small museum catering for those who have a fancy for such horror stories: the locals who go to the island have a different purpose: they go there for the restaurants which specialize in lake fish and particularly in fried eels.

A touch of the past

The Ottoman past of Ioanina is evident in many inscriptions which one can find in various parts of the town (not only the old section). Tarboosh is a felt cap we traditionally associate with Ottoman XIXth century society (the last sultans all wore tarboosh), but it was also popular among the Greeks and one can find in Ioanina a modern mosaic portraying a saint wearing such a hat. The pastry shops of the town still offer the whole range of traditional honey sweets which are popular also in Turkey.