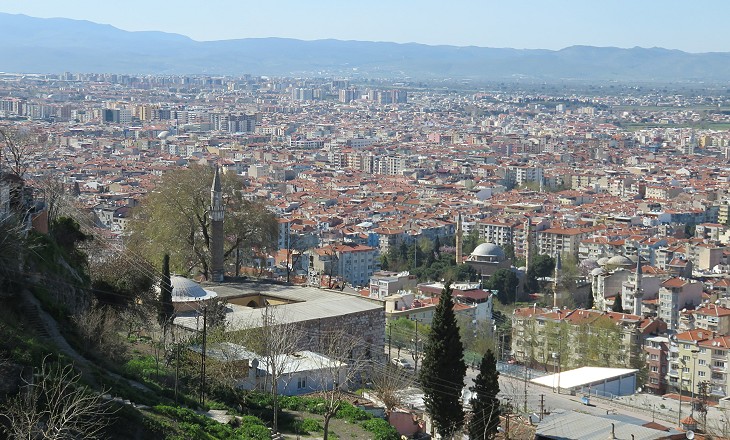 The town retains its antient name, and is still very extensive; spreading in the plain at the mountain foot, on the acclivity of the castle-hill, and up a valley on each side. It is populous, and has a great trade. The mosques are numerous; and the Greeks have a large and handsome church, and also a monastery. Among the mosques at Magnesia, two have double minarets, and are very noble structures of marble.
Richard Chandler - An account of a tour made at the expense of the Society of dilettanti - 1775
At this time it is a large and populous city, with minarehs, all of them lofty, and many picturesque.
James Dallaway - Constantinople Ancient and Modern with Excursions to the Shores of the Islands of the Archipelago and to the Troas - 1797
On September 5, 1922 retreating Greek troops set fire to Manisa. Nearly 90% of its buildings were destroyed and some 4,000 inhabitants died. Sultan and Muradiye mosques were surrounded by open spaces and were not affected by the fire, similar to Ulu Cami which stands in a commanding position on high ground. 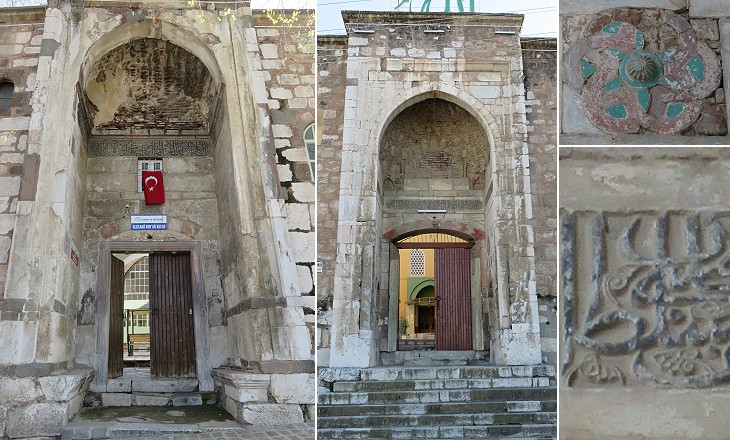 In 1313 it ranked among the acquisitions of Sarkhan, afterwards Sultan of Konia. Dallaway
Manisa was seized in 1075 by the Seljuks who founded a powerful Sultanate at Konya, but after a few years the Byzantines managed to reconquer the town. They held it until 1313 when they surrendered it to Sarukhan Beg, a commander of the Germiyanid Principality based in Kutahya. Sarukhan Beg established his own principality with Manisa as its capital. In 1374 Ishak Celebi, his grandson, built Ulu Cami (Great Mosque) and an adjoining medrese on the site of a previous church using some ancient materials. A hammam and a tekke (Dervish monastery) are located near the mosque. 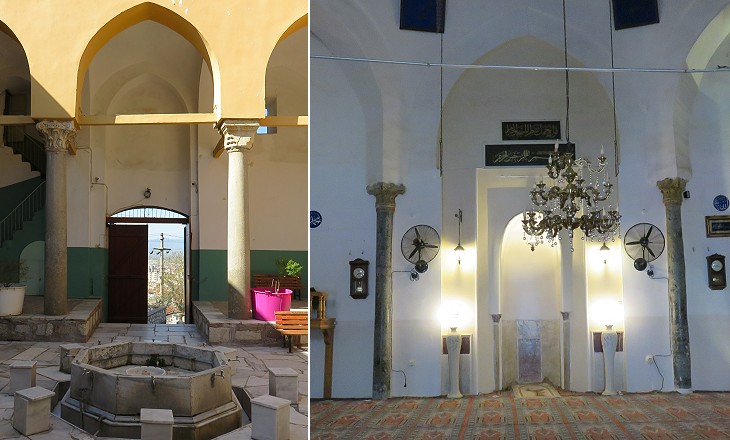 The prayer hall is entered from a courtyard with a plain fountain through three rectangular doors. Inside, the mihrab, a semi-circular niche with two embedded columns on the sides, sits below the main dome. The dimly lit prayer hall has small rectangular windows on three sides. The Qibla, the mihrab wall, facing the mountain, has no windows. 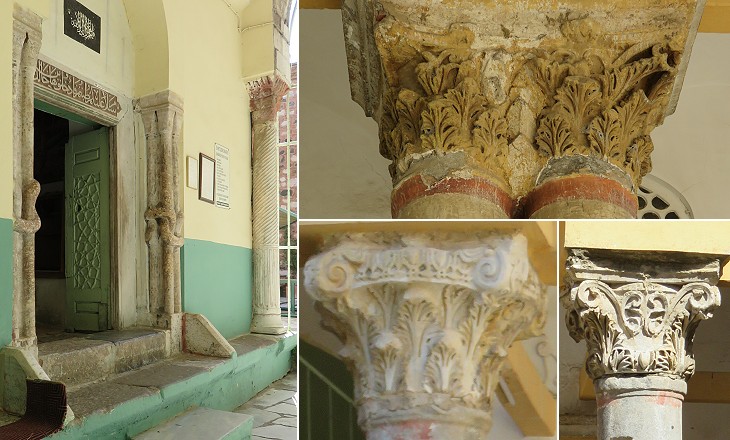 The Great Mosque of Manisa is seen as a step towards the development of large buildings including medreses, mausoleums and other facilities in addition to the mosque itself. In particular the design of Ulu Cami is believed to have influenced that of Uc Serefeli Camii at Edirne.
In 1410 the Ottomans put an end to the Sarukhanid rule, but Manisa retained its role of capital of the territory of the former principality. In 1513 Sehzade (Prince) Suleiman was appointed governor of Manisa by his father Sultan Selim I. He was accompanied by his mother Ayse Hafsa Sultan. After his son's accession to the throne in 1520, Ayse Hafsa Sultan became his most influential advisor until her death in 1534. She promoted the construction at Manisa of a large kulliye, a complex of buildings which included a mosque, a primary school, a medrese, an imaret (soup kitchen), a hammam and a darussifah (a hospital for the mentally ill). 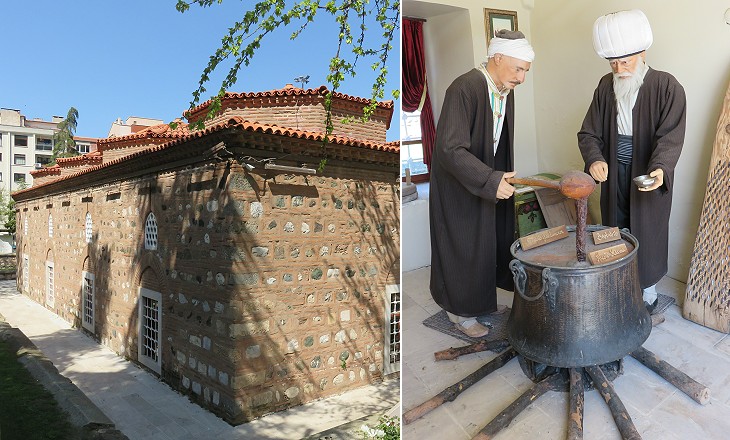 (left) Sultan Kulliyesi Darussifah; (right) a room of the Medical History Exhibition housed in the building. It shows the preparation of Mesir Paste, a medicament based on more than thirty herbs and spices, which is said to be an aphrodisiac. You may wish to see the beautiful darussifah of Ikinci Beyazit Kulliye at Edirne

Maybe Mutesellimi, governor of Manisa in 1745-1755 had too much Mesir Paste: I went back to Muselem and being now admitted to a hearing was received with much politeness. He was so young that his whiskers had but just begun to grow. (..) Muselem as the chief of the town began very carefully to think about his health which was not only followed by his servants, but by all in the town whom I had occasion to converse with. It is common enough amongst the Turks and even Greeks to be sick as often as they have an opportunity of speaking to a physician. (..) A Seraglio of fifteen women which at so early an age he kept was enough to hurt it, but I would not advise any physician who may chance to be in my situation and is consulted by a Turkish grandee to tell him this as he might perhaps become a martyr to truth. It is best to think and do what appears to be of service and talk as little as possible.
Fredrik Hasselquist - Voyages and Travels in the Levant in the Years 1749, 50, 51, 52. 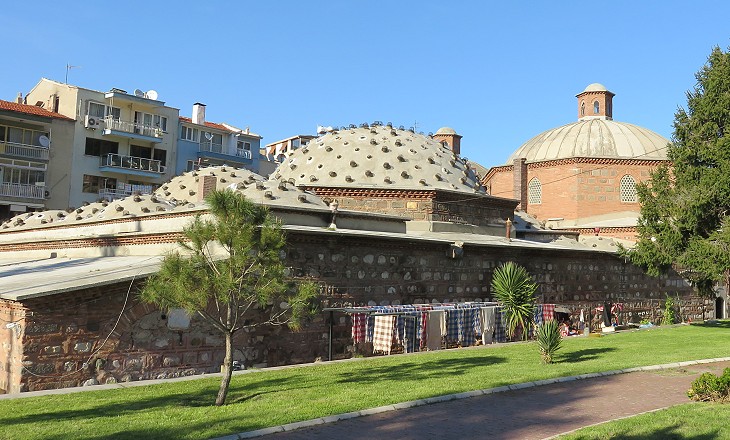 Sultan Suleiman appointed Sehzade Mehmet, his preferred son, governor of Manisa and, after Mehmet's death in 1543, Sehzade Selim who in 1566 became Sultan Selim II. Serving in Manisa was regarded as a sign of favour because it was closer to Constantinople than other towns (Amasya, Konya and Trebizond) where princes were sent to gain political and military experience.
We were shown the site of his palace, his seraglio, and garden. The remains are some pieces of wall, with several large and stately cypress-trees; and near them is a neat Mausoleum, with a dome, over the tombs of his wives and children, of different sizes, disposed in three rows, all plains and of stone. Chandler
The princes/governors of Manisa resided in a palace (Saray-i Amire), which similar to Topkapi Sarayi had courtyards, gardens and pavilions. It was located near Sultan Kulliyesi, but it was surrounded by houses made of mud and timber and the entire complex was destroyed by fire in 1922.

Sultan Murat III was governor of Manisa prior to his accession to the throne in 1574 and in 1583 he commissioned the construction of a large complex in the town where he had spent his youth. It is located very near Sultan Kulliyesi and it was designed by Mimar Sinan, the architect in charge of supervising all constructions promoted by the Sultans. He was assisted by Mehmet Aga, a young architect best known for having designed Sultan Ahmet Camii in 1606-1616. The complex included a medrese and an imaret which today house the Archaeological and Ethnographic Museums of Manisa. 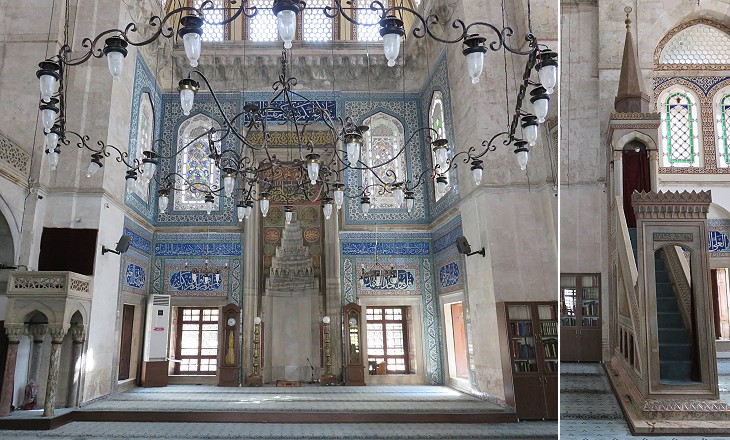 We were permitted to enter one of them, which had been lately beautified, leaving our boots or shoes at the door. The inside was as neat as possible; and the floor covered with rich carpets. The ornamental painting pleased by an odd novelty of design, and a lively variety of colour. The dome is lofty, and of great dimensions. The lamps, which were innumerable, many pendant from the cieling, with balls of polished ivory intermixed, must, when lighted, amaze equally by their artful disposition, their splendor, and their multitude. These edifices, a college of Dervishes, and a bedlam were erected and endowed by Sultan Morat and his queen. Chandler
Many Turkish towns boast having a Mimar Sinan Mosque, but in most cases the building is a very ordinary one, the design of which was formally endorsed by Sinan, but without any direct involvement. Muradiye Camii instead can be included among the finest works by Sinan. It shows how he combined structural solidity with the presence of many windows, a balance he had struggled to achieve in his early works. The Sultan's patronage is evident in the very elaborate decoration of the interior. 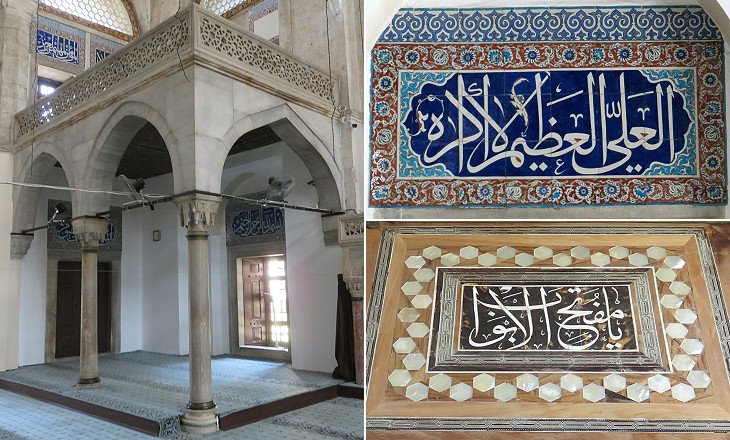 The image used as background for this page shows a doorknob inside this mosque.
Move to page three - Other Monuments of Manisa or return to page one covering its ancient past.