You may wish to see an introductory page to this section with a map or a page on pre-Ottoman Amasya first. 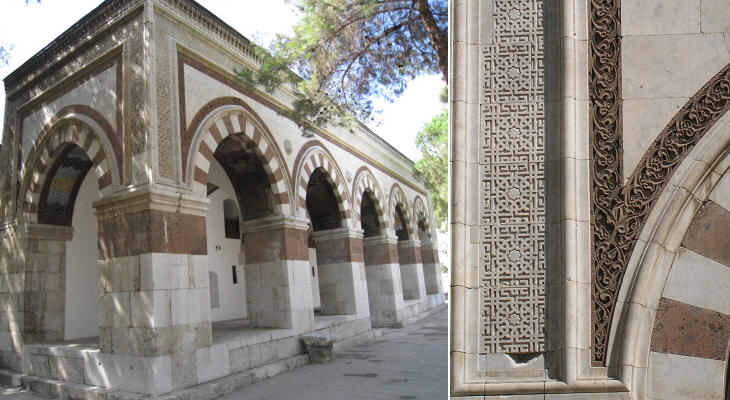 July 12th. (1837) Amasiyeh was first reduced under Osmanli dominion by Bayazid, in the year of the Hegira 794 (a.d. 1392). At the death of Bayazid, one of his sons, Mohammed, who appears to have exerted himself much in clearing that part of the country from the Tatars who had followed Timour, called himself Sultan of Amasiyeh, but soon afterwards acknowledged lealty to his elder brother Suleiman. On the death of this prince, however, Mohammed seized on Brusa, and having defeated Musa Chelebi, was declared Sultan of the Osmanlis by the title of Mohammed I.
William Francis Ainsworth - Travels and Researches in Asia Minor, Mesopotamia, Chaldea, and Armenia - 1842
The last years of the XIVth century saw continuous fights in Anatolia among the various states into which the region was divided. This was mainly due to the emerging power of Timur, a warlord who was based in Samarkand in Central Asia and who had weakened the power of the Ilkhans; these were the heirs of the Mongol Empire and from Persia they controlled most of Anatolia via a system of vassal states.
Ottoman Sultan Yildirim (Thunderbolt) Beyazit I expanded his possessions eastwards and he occupied Amasya. His aggressive policy eventually clashed with that of Timur who invaded Anatolia; Beyazit was defeated and captured at Ankara in 1402. Timur assigned Amasya to Mehmet Celebi, a young son of Beyazit: Celebi means gentleman and it indicates that Mehmet was not the Crown prince; this was Suleyman to whom Timur gave the European Ottoman possessions, while Musa Celebi, a third brother, ruled over Bursa and the nearby region. All three brothers had to pledge their obedience to Timur who died in 1405. The three brothers started to fight each other; in 1413 eventually Mehmet emerged as the victor (Sultan Mehmet I) and he re-united all the Ottoman possessions; he placed his residence at Edirne, but he appointed his son as governor of Amasya. This tradition was continued for more than a century.
Beyazit Pacha was an advisor to Mehmet Celebi and he eventually became his grand vizier. In 1419 he built a complex of which only the mosque remains. The most interesting aspect of the building is its portico. The arches are made up of red and white marble blocks and are framed by a dark red stone band carved with arabesques. The whole portico is framed by another band of white marble with a pattern based on octagons. 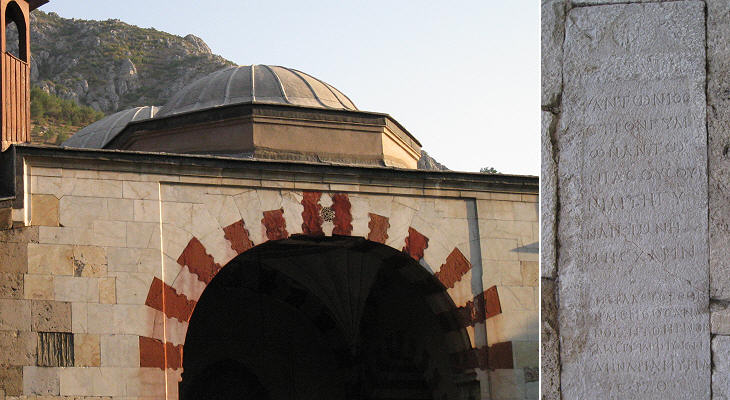 A few years later, in 1428, Yorguc Pacha, son of another advisor to Mehmet Celebi, built a mosque which again is characterized by the artistic use of red and white marbles. Materials taken from buildings of the Roman period were utilized for its construction and by going around the walls of the mosque it is easy to notice fragments of ancient inscriptions and decorations. 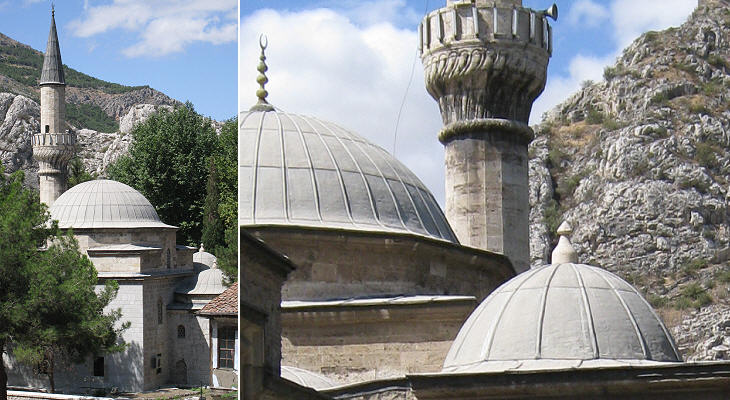 During the lifetime of Mohammed II. his son Bayazid, after Bayazid II., was governor of Amasiyeh. Ainsworth
Sultan Beyazit II was for many years the governor of Amasya before his accession to the throne. He must have enjoyed his stay in Amasya because many buildings date back to the period of his reign (1481-1512). Lala Mehmet Pacha was a tutor of Ahmed, one of Beyazit's son. 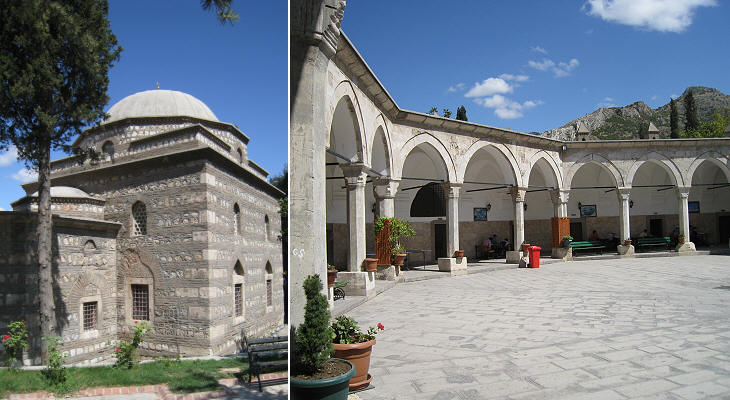 At the court of the sultans, eunuchs could play an important role and achieve significant power: they were in charge of the sultan's harem and knew a lot about the private life of their masters. Buyuk Aga was the Chief White Eunuch which meant being the head of the staff at the Sultan's palace. The medrese he built in Amasya is one of the first examples in which the traditional rectangular courtyard is replaced by an octagonal one. It is also one of the few medreses in Turkey which is still used for a religious purpose. Students in their teens learn Islamic teachings. 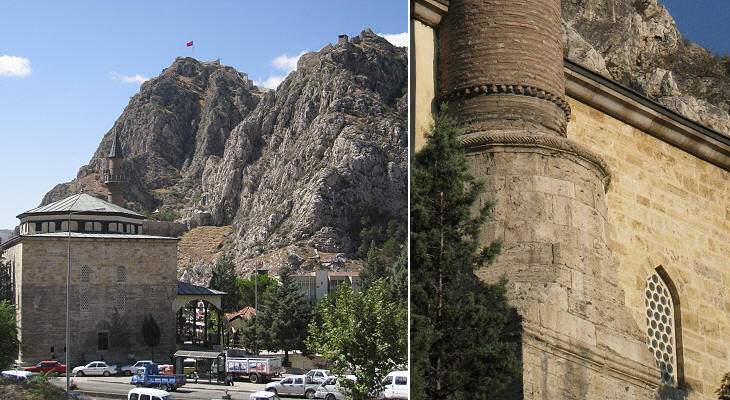 Earthquakes and fires have damaged many monuments of Amasya. Gumuslu Camii is a very old mosque which dates back to 1326, but it was rebuilt in 1491 after an earthquake. The current building is the result of three major restorations which occurred afterwards: apparently only the minaret retains some original parts. 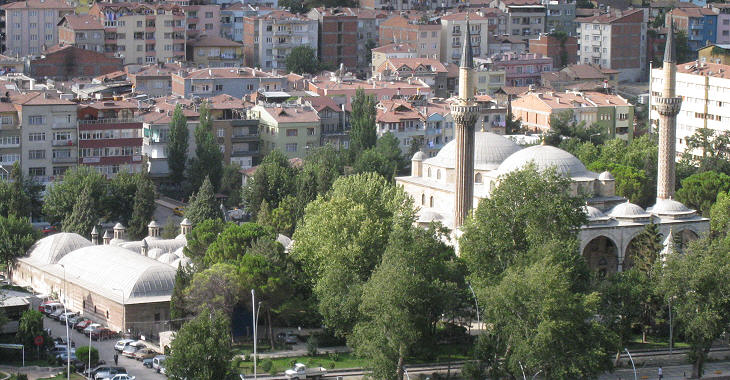 Besides its castle it contains the ruins of a temple, and a handsome jami, built by Sultan Bayazid. Ainsworth
In 1486 Sultan Ikinci Beyazit II (Ikinci=Second) decided to link his own name to a major kulliye (complex of buildings). The shape of the mosque follows the traditional design of the early Ottoman buildings at Bursa which are characterized by two identical domes. 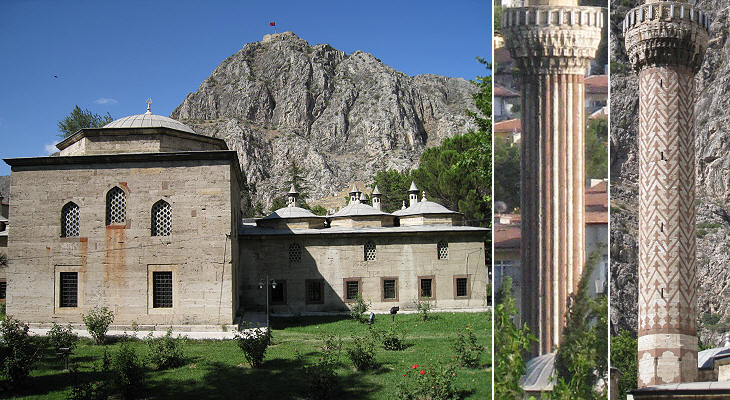 (left) Ikinci Beyazit Medresesi; (centre/right) details of the minarets (also in the image used as background for this page)

The complex included a large medrese and the mosque had two very elegant minarets, similar to those of Uc Serefeli Camii at Edirne. 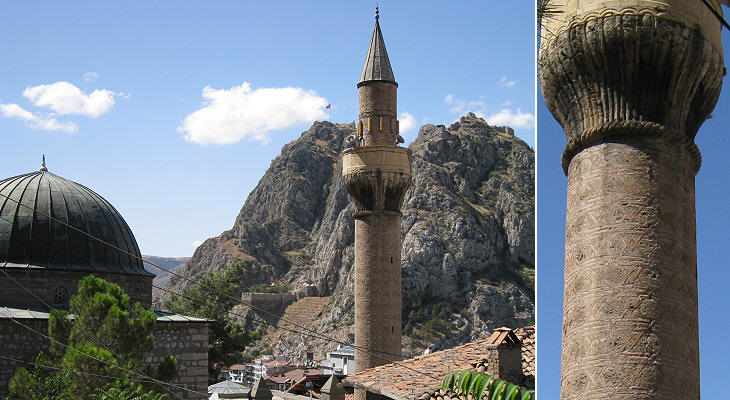 The majority of the monuments of Amasya were built near or along the river banks. Sofular Abdullah Pacha was a beylerbey (Governor-general) of Sultan Beyazit II. He chose to build a mosque on a steep hill opposite the castle, in a district which retains a lot of traditional houses.
The death of Sultan Beyazit II in 1512 marked the end of a prosperous period for Amasya. The sultans who came after did not show the same interest in embellishing the town, especially after a very gruesome event.
In the earlier part of the reign of Suleiman I., his son Mustafa was Prince of Amasiyeh, but his conduct on the first Persian campaign having subjected him to suspicion, he was put to death. (..) From that period Amasiyeh became a mere pashalik, whose local history is never distinct from that of the remainder of the empire. It is governed by a mutesellim, under the Pasha of Sivas, and is also the seat of an Armenian bishop. Ainsworth
Sultan Selim I appointed his heir to the throne governor of Manisa and so did his successors. 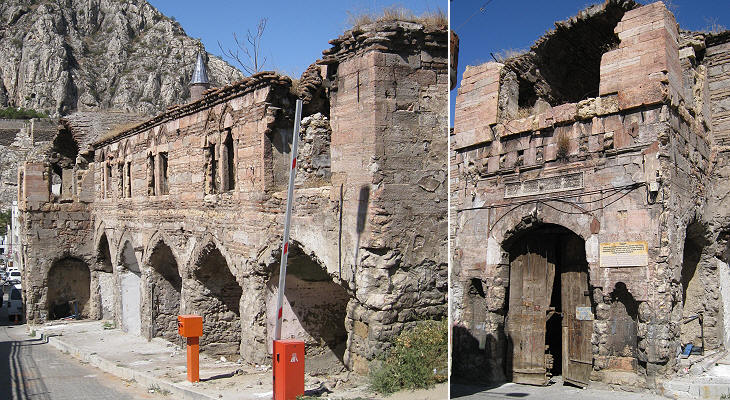 The modern town of Amasiyeh contains a population of 18,000 souls, of whom about 5000 are Armenians, chiefly employed in the manufacture of silk. The general character of the town is that of opulence, and there are many handsome mansions of haughty Turkoman and Osmanli beys. Ainsworth
Amasya was located along an important east-west trade route and it had a large XVIIth century caravanserai (Tas Han), which unfortunately is partially in a ruined condition. 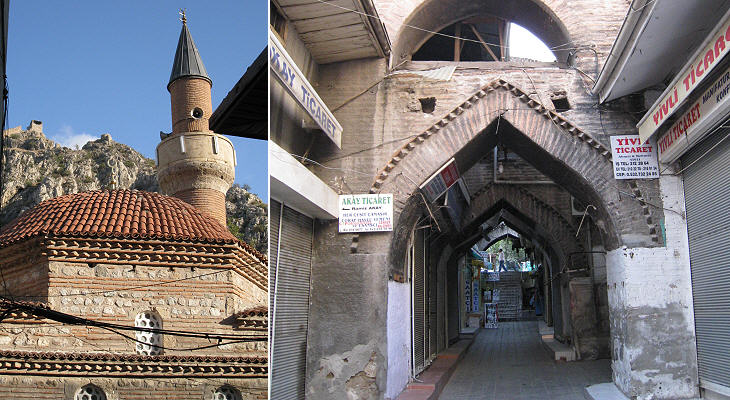 The area between the old great mosque and the river was the commercial centre of Amasya; in addition to the caravanserai there was a large covered market built by Huseyin Aga. It also housed an old mosque.

While we were at Amasiyeh we lodged in a large mansion of one of the old Turkoman beys, built on the river's edge, the tenant of which received us out of pure hospitality. Ainsworth
The modernization of Amasya did not affect Hatuniye Mahallesi, the quarter on the narrow strip of land between the fortress hill and the left bank of the river. In particular this quarter retains many traditional yaliboyu (near the water) houses which are shown also in the introductory page. 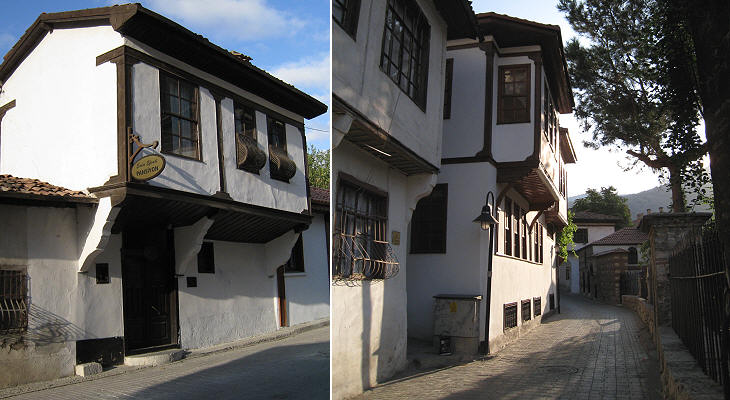 Other interesting Ottoman buildings can be seen along the street which crosses the quarter. Many of them have been turned into hotels and guest houses. 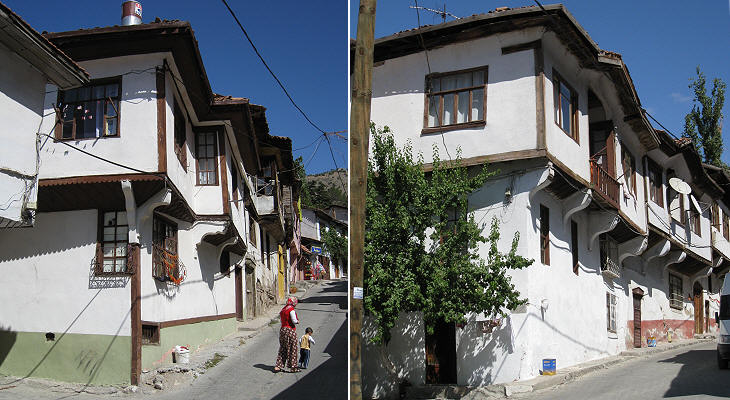