Turhal and Zile are two minor towns which are situated between Amasya and Tokat in the valley of the Yesilirmak (Green River), the ancient Iris. Tuesday August 9. (1835) We entered a picturesque plain surrounded by high and precipitous hills. Tourkhal is situated in the centre of this plain, with the Iris flowing through it; but the most remarkable feature is the castle-hill, which is completely insulated, and rises to a height of 600 or 700 feet.
William Hamilton - Researches in Asia Minor, Pontus and Armenia - 1842
Turhal enjoyed double natural protection: an isolated rocky hill and the Yesilirmak which almost surrounded it. The conquest by Pompey of its fortress was one of the final events of the IIIrd Roman war against Mithridates VI, King of Pontus. 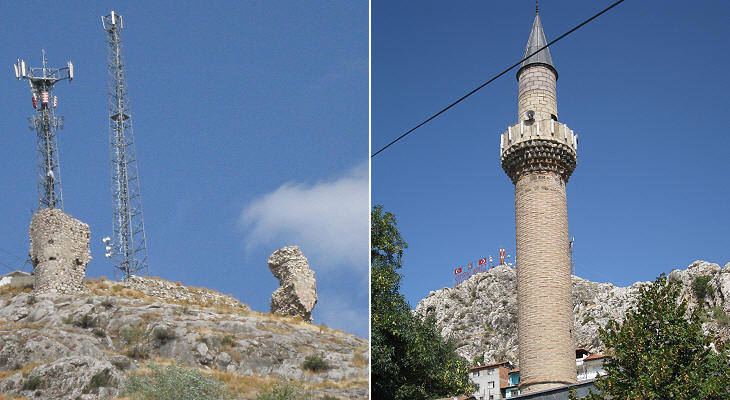 I afterwards visited the ruins of the castle, apparently of a late period; the gateways, however, consisted of large blocks of stone, having an air of antiquity, and the lintels, sideposts, and threshold, were each formed of a single block; the rock on which the castle stands is a semi-crystalline limestone, of which other insulated masses rise above the plain in several places. Here also (a reference to the castle of Unye) a subterranean passage or flight of stairs leads into the centre of the mountain, the steps of which near the top were tolerably perfect, and I attempted to descend; but they gradually became so much obliterated that it was impossible to preserve a footing on the smooth surface sloping at an angle of 45°. After descending about fifty steps, contrary to the advice of my guide, who talked about Sheitan (Devil), it was with difficulty that I effected my retreat. Hamilton
A couple of ruined towers are the only remains of the fortifications built by the Ottomans who added the town to their possessions in 1399. Turhal is a modern town which has expanded in the plain, while only few people live in a string of houses around the hill. Its Ulu Camii (Great Mosque) was built in 1530, but it is not a large building and it does not have a typical Ottoman dome. 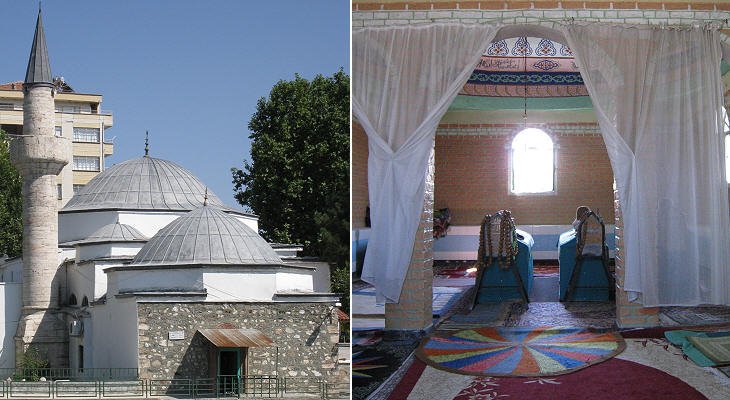 This small mosque has a more classical Ottoman design than Ulu Camii: it was built in 1736. The (modernized) 1335 museum of a local member of a Sufi order is still the object of care and devotion. (above) Zile Castle; (below) Julius Caesar's words on the glass panels of bus shelters

At length we came in sight of the black hill of Zilleh, the ancient Zela, rising in front of the above the level of the plain, and crowned with a Turkish or Byzantine fortress; while the rest of the town, situated lower down, only became visible about a mile farther. (..) At half-past eight we were still reaching the narrow ravine, which is not without considerable interest, as being the spot described in Caesar's Commentaries where the great battle took place between him and Pharnaces, king of Pontus, the result of which was announced in the three celebrated words, "Veni, vidi, vici." Pansa, in the description of the Alexandrine war, describes a deep ravine about three miles north of the city, the opposite sides of which were occupied by the contending armies, before Caesar's victory. Hamilton 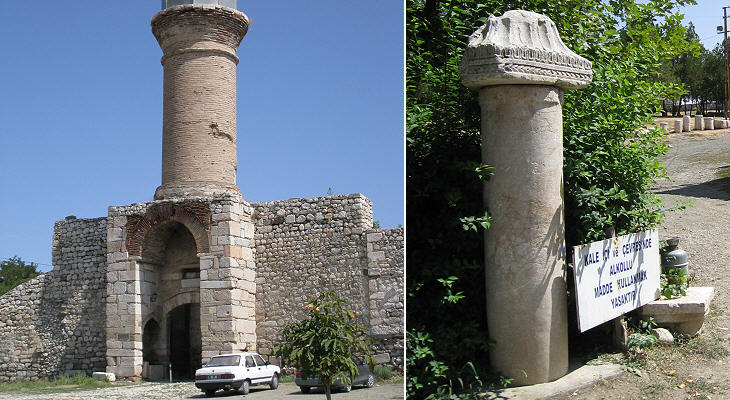 Accompanied by my interpreter and two chavasses, I proceeded to the castle in search of antiquities and inscriptions. Baised upon the foundations of an old Byzantine fortress, the modern castle is situated upon a remarkable hill, which rises abruptly from the plain near the centre of the town, and occupies a very commanding position. Near the gateway large blocks of marble and fragments of broken architraves have been built into the wall; in other parts three large Ionic capitals are similarly appropriated. Hamilton
According to Strabo, an ancient historian/geographer who was born in Amasya in 63/64 BC, Zela was a town which was known for a temple dedicated to the Persian goddess Anahita. The economy of Zela was based on an annual sacred festival. Today it relies on its agriculture and in particular on its aubergines. 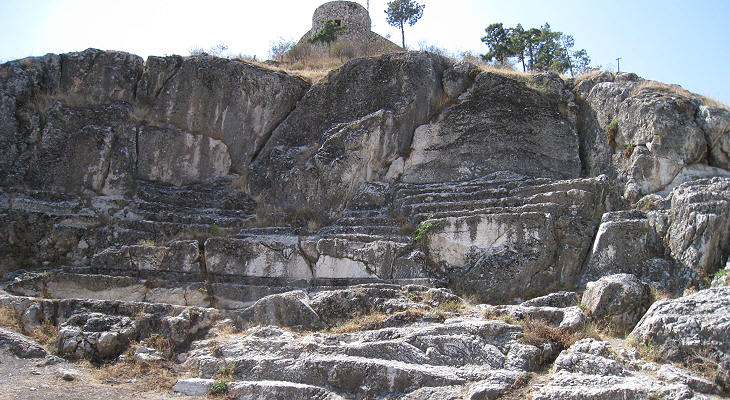 The remains of a small ancient theatre are visible to the east of the fortress hill, together with some rock tombs. Zile lost several old buildings in 1920 when supporters of Sharia (strict Islamic law) seized power in the town and attacked the barracks of the new Turkish Republic's army. As a result of the fight a great fire developed and it destroyed most of the old town and the trees which surrounded the fortress.
The image used as background for this page shows the unusual tips of the minaret and of the dome of Beyazit-i Bestami (a Persian Sufi philosopher) Camii in Zile.