You may wish to see an introductory page to this section with a map first.
Bogazköy (Gorge Village) was discovered in 1834 by the French explorer Charles Texier, who saw Yazilikaya and those remains of the ancient city that were aboveground. After visits by British and German travelers, it was another Frenchman, Ernest Chantre, who in 1892-1893 made the first soundings and found the first cuneiform tablets there. The language in which those texts were written was not known at the time.

Ancient Bogazköy occupies a section of a mountain slope at the southern end of a small fertile plain. It lies between two deeply cut streambeds, filling the angle between their converging courses. Their confluence at the level of the plain (elevation about 3,100 feet - 900 metres) marks the northernmost point of the city area, which rises toward the south by about 1,000 feet (300 metres) on a length of 1.25 miles (2 km). The eastern valley narrows in some places to form a pronounced gorge. The earliest settlement in the city area dates to the 3rd millennium BC, in the Early Bronze Age. There are no written documents that would reveal the identity of the first settlers.The earliest written sources found at Bogazköy are clay tablets inscribed in cuneiform writing in the Old Assyrian language. They attest the presence of Assyrian merchants on the site in the 19th century BC. The houses of the merchants were in the lower city. The town extended up to Buyuk Kale (Great Castle), probably culminating in the palace of the local king. Both this town and the merchants' houses were destroyed after 1800 BC. Little is known about the origins of the Hittites. It is assumed that they immigrated into Central Anatolia via the Caucasus. The choice of the site to found the town was due to the presence of rocks which could be easily fortified and of a small river which provided a precious water supply in an arid region. The Hittites used the name Hatti as the designation for their land.

Nisantas (marked rock): (above) the actual inscription; (right) part of it as reconstructed by archaeologists

Under the auspices of the German Orient Society, archaeologist and historian Hugo Winckler in 1906 began excavating at Bogazköy, where he met with extraordinary success. In ruined storage chambers, very likely royal archives, that appeared to have been destroyed by a great fire, he found thousands of hardened clay tablets. Most were in an unknown language, which was later shown to be Hittite. A few included a cuneiform version of a peace treaty concluded between the Egyptian pharaoh Ramses II and the Hittite king Hattusilis, which Winckler translated. He continued excavating until 1912, revealing the remains of a city whose temples, palaces, fortifications, and gateways left little doubt that this was the site of a mighty capital. From his findings, Winckler was able to draw a preliminary outline of the history of the Hittite empire in the 14th and 13th centuries BC. Hattusa is first mentioned by King Labarnas (XVIIth century BC) who called himself "the one from Hattusa" and is the first ruler of whom there are authentic texts in the Hittite language and one of the founders of the Old Hittite kingdom. Hattusa remained the capital throughout Hittite history with few interruptions. The sources tell of one destruction of the city by enemies about 1380 BC. Soon afterward, King Suppiluliumas I not only restored the city but, by his conquest of most of Anatolia and of Syria (including parts of Lebanon), made it the capital of a real empire. Scholars have wondered how this empire could be ruled from such a remote place.
A rock in a central position in the Upper City has a lengthy inscription at its base; the relief was very low and it is almost worn off; only some words have been deciphered. It is written in Luwian hieroglyphs, Luwian being a language which could be written both in cuneiform and hieroglyphic characters. It became very common in the last phase of the Hittite Empire. Archaeologists attribute the inscription to Suppiluliumas II, the last of the Great Kings of Hattusa.

A reconstructed stretch of the walls

The excavations continued from 1931 to 1939 and again after World War II. Those excavations established the stratigraphy and, thereby, the history of the site, besides yielding many more tablets from several locations on Büyükkale and the area of the Great Temple. The excavators had to remove the post-Hittite structures in order to reach the Hittite levels, and they covered all levels earlier than the Hittite empire with earth again in order to present and preserve as much as possible of the remains of the city of the 13th century BC.
The Hittites had construction techniques based on three building materials: stone, timber and unburnt bricks. Stones were used for the foundations and for low walls which were completed by adding bricks; timber was used to support ceilings. This explains why the first impression a visitor has of Hattusa is that the city has vanished because only the stone part of its buildings remain.
In order to show how Hattusa appeared in its heyday archaeologists have rebuilt a short stretch of the walls using the same materials and techniques of the Hittites.

(left) Foundations of buildings at Buyuk Kale; (right) stile of a door and door socket

At the very beginning Hattusa was limited to an isolated rock with an almost flat top. When Hattusa was enlarged to include first the Lower City and then the Upper City, the original settlement became the Royal Citadel (today's Buyuk Kale). Archaeologists have identified a series of courtyards surrounded by buildings which housed the court, the royal guards, the apartments of the king and archives of clay and wooden tablets. The names of the various sites of Hattusa are modern and are generally based on their physical aspect. 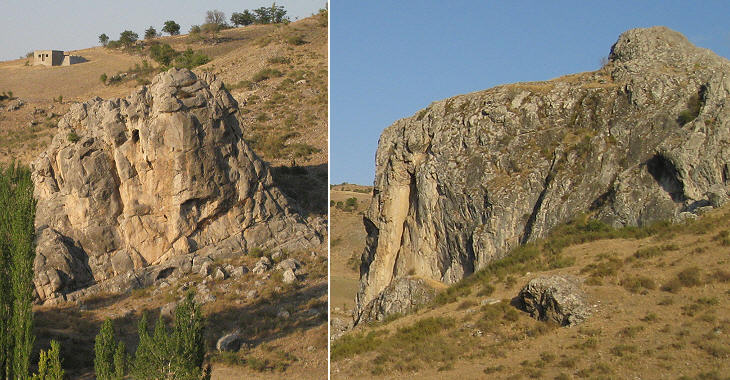 A further extension of the city wall across the gorge so as to enclose the plateau of Buyukkaya, east of the valley, belongs to the 13th century BC. Two large rocks were included in the fortifications of Hattusa to protect its northern side. They were used as granary of an unusual type; storage rooms were dug into the rock floor and after having been filled with grain they were covered with a layer of earth. 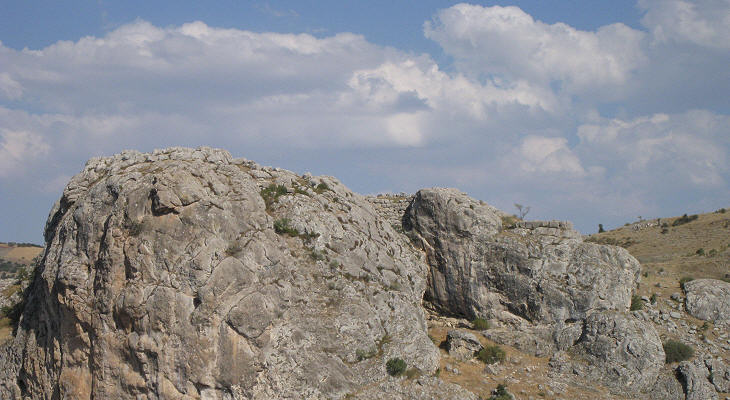 In the New Kingdom, or Empire, Period (c. 1400-c. 1190 BC) the city was extended toward the south (Upper City). Sari Kale, another large rock, stood at the centre of this area. The Hittites fortified the rock and dug a cistern, but the remains of their buildings were modified in Byzantine times when a small settlement developed at the foot of the rock. The Upper City was (as the name suggests) placed on high ground, but for its defence the Hittites could not rely on cliffs and therefore they had to build a very long wall along its southern side.
The Lion Gate stands in its western section: two rectangular towers flanked the entrance, a passage marked by exterior and interior portals. Both portals were fitted with pairs of heavy wooden doors; those at the exterior were most probably sheathed in bronze. The outer gate was decorated with two sculptured lions projecting from the pillars which supported a corbelled arch. They had a threatening appearance with wide open mouths. 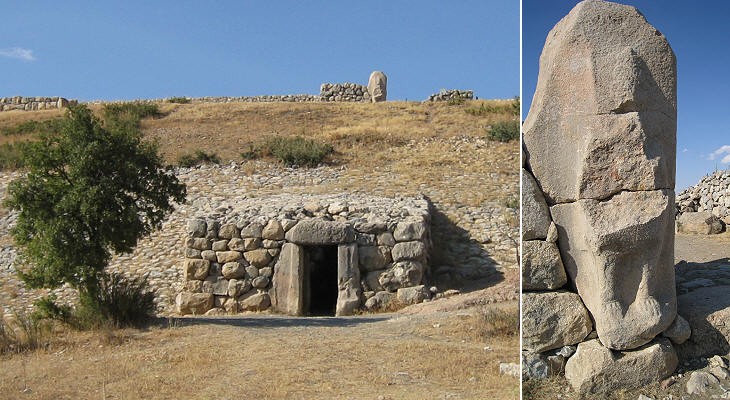 The highest and southernmost point of the walls was strengthened by a huge rampart: at its top there was another monumental gate decorated with sphinxes; their presence is most likely due to the contacts between the Hittites and Egypt. At the foot of the rampart there is a small postern which through a long tunnel leads to the city. The theory that it was used for sallies is in contrast with the fact that the postern was in full view. The image used as background for this page was taken inside the tunnel and it shows the corbelled technique used for its construction. The function of this postern is still uncertain. You may wish to see the corbelled passages of the Upper City of Tiryns.

(left) King's Gate; (right) detail of the relief (a cast)

A third monumental gate was located at the eastern end of the southern wall: it is very similar to the Lion Gate with two towers protecting it. The relief decoration of this gate is on its interior: the sculpture of a warrior has been interpreted as portraying a king, but most likely it represented a god; the short dress does not fit very well with the ordinarily cold climate of Hattusa; this detail could be due to Egyptian influence. 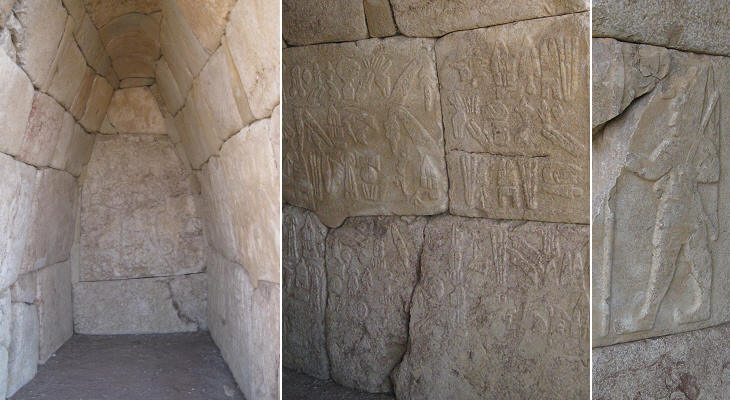 This rock and its fortifications stand to the south of the Royal Citadel (Buyuk Kale); the fortifications belong to a period after the fall of the Hittite Empire; archaeologists have excavated the remains of a temple built by King Suppiluliumas II and in particular two small chambers one of which has reliefs in almost excellent condition.