- Tiryns
(Bronze coins minted during the reign of Emperor Antoninus Pius and showing two Labours of Hercules:
The Apples of the Hesperides (left) and The Cattle of Geryion (right).
The coins were found at Alexandria, Egypt and are now at the Numismatic Museum of Athens)

If the development of the myth of Heracles/Hercules were to be represented with the graph of a function it would show an ever growing curve which starts in ca 1400 BC and reaches its apex in 287 AD when co-emperors Diocletian and Maximian defined their roles in the Tetrarchy system by assuming the titles of Iovius (the former) and Herculius (the latter); in this way Hercules, the hero known for his strength and who was not a member of the original Olympian pantheon was almost made equal to Jupiter, the Father of Gods and men.
The Twelve Labours of Hercules are a series of popular tales which shed light on the early development of civilization in continental Greece and its spreading to other Mediterranean countries. The first six labours take place in the Peloponnese, the next five occur outside Greece in locations which span from the Black Sea to Spain, the twelfth and last is set in the Underworld. Of the first six labours, three take place in Argolis, a region of northern Peloponnese which is named after the ancient town of Argos. 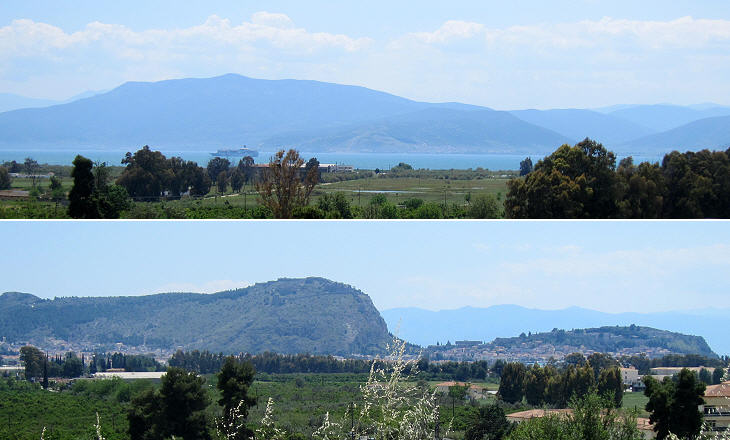 Views from the Upper Citadel of Tiryns: (above) towards the Gulf of Argos which is just a mile away; (below) towards Nauplia

The civilization which developed in Argolis in the period 1600-1100 BC is called Mycenaean, because in 1876 at Mycenae German archaeologist Heinrich Schliemann found several artefacts which proved the level of refinement attained during that period. The rulers of Argolis entertained relations with Crete and with towns on the south-western coast of Turkey; according to the interpretation given by many scholars to some inscriptions they were regarded as important counterparts by the Hittite kings.
Tiryns was probably the main port of Argolis; minor remains of an ancient harbour have been identified in the proximity of the fortified town (in antiquity the coastline was just 200 yards from its walls). 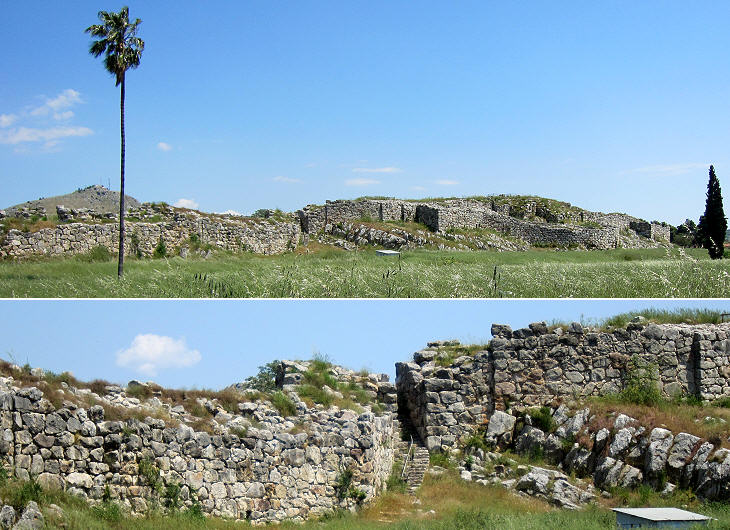 (above) Overall view; (below) western gate at the junction between Lower (left) and Upper (right) Citadel

Tiryns is better defined as a castle rather than as a town; initially it was limited to the Upper Citadel where archaeologists have found evidence of a palace and of a limited number of military related buildings. Initial excavations were undertaken by Heinrich Schliemann in 1884-85; he found out that the Upper Citadel was built above a previous smaller structure. 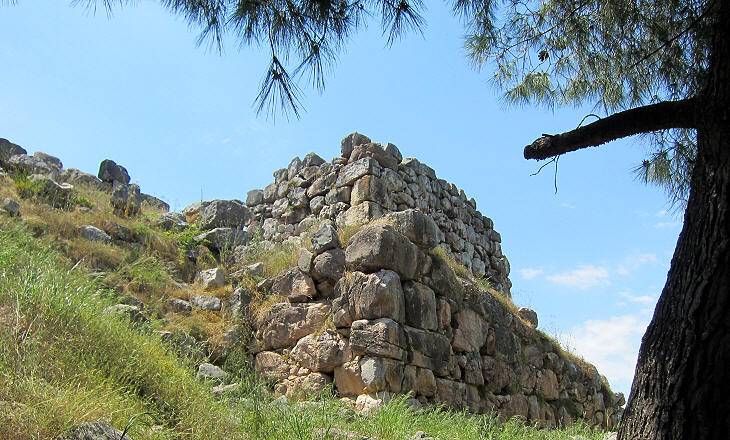 Walls of the Upper Citadel near the main entrance

The natural ground elevation upon which Tiryns was founded did not ensure an adequate defence so that imposing walls surrounding the citadel were required; the main entrance on the eastern side was strengthened by towers. 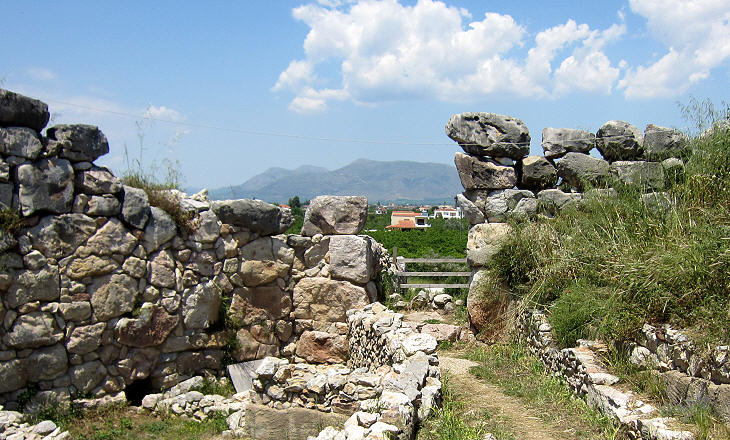 Upper Citadel: gate of the outer walls (seen from the interior)

The walls of Tiryns were built by using boulders which were roughly cut to obtain a smooth external surface; this type of walls was called cyclopean by Pliny on the assumption that only giants could have lifted the boulders; similar walls can be seen in several towns south of Rome such as Segni and Alatri, but they were built one thousand years later. 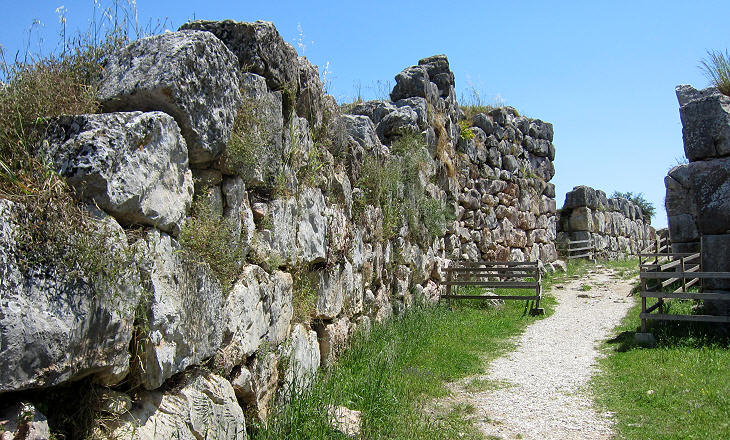 The eastern side of the Upper Citadel was protected by a double curtain of walls; the enemies who had managed to penetrate the outer walls found themselves in a rather awkward position; in order to reach the gate giving access to the royal palace they had to enter a passage between the outer and the inner walls. 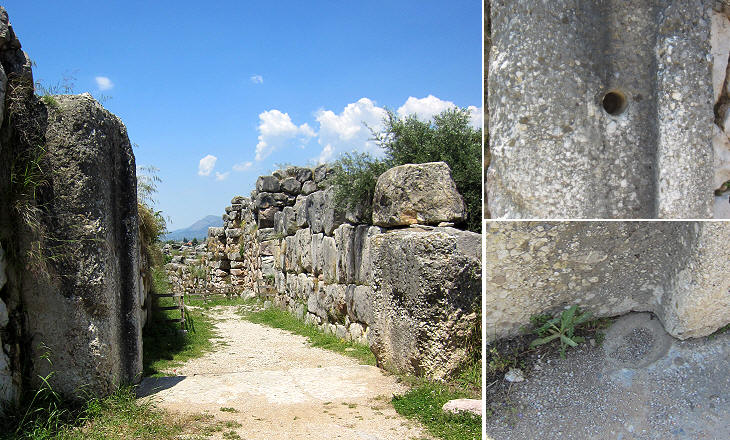 Upper Citadel: (left) inner gate; (right) holes related to the door on one of the pillars (above) and on the floor (below)

The passage was blocked by a gate; the closure of the door was reinforced by placing a horizontal pole behind it; the wide size of the gate however indicates that, notwithstanding defence requirements, it had a celebratory and decorative function in times of peace. 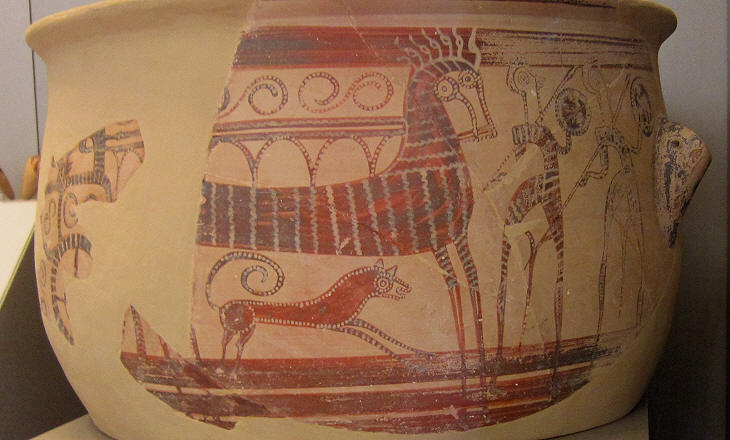 In the book Schliemann wrote about his excavations at Tiryns he made many references to Troy and although today the events chanted by Homer are thought to have occurred after the decline of Tiryns, it is impossible not to think of them when visiting the archaeological site or seeing some of the artefacts which were found there.
so the many groups of soldiers moved out then
from ships and huts onto Scamander's plain.
Under men's and horses' feet the earth rang ominously.
Then they stood there, in that flowered meadow
by the Scamander, an immense array,
as numerous as leaves and flowers in springtime.
(..)
The soldiers, like a fire consuming all the land,
moved on out. Earth groaned under them, just as it does
when Zeus, who loves thunder, in his anger lashes
the land around Typhoeus, among the Arimi,
where people say Typhoeus has his lair.
That's how the earth groaned loudly under marching feet.
(The Iliad - Book II - Translation by Samuel Butler) 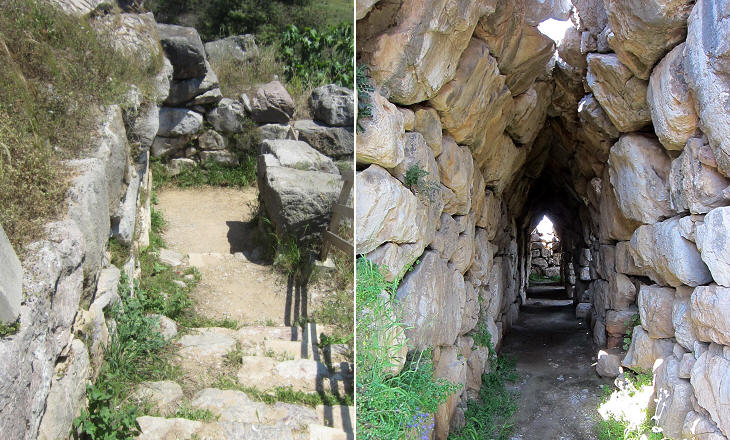 The outer walls of the Upper Citadel were so large that they included a series of casemates linked by long corbelled passages; it has been thought that these passages allowed the defenders to reach the top of the walls, but the existence of an internal staircase has not been positively identified. 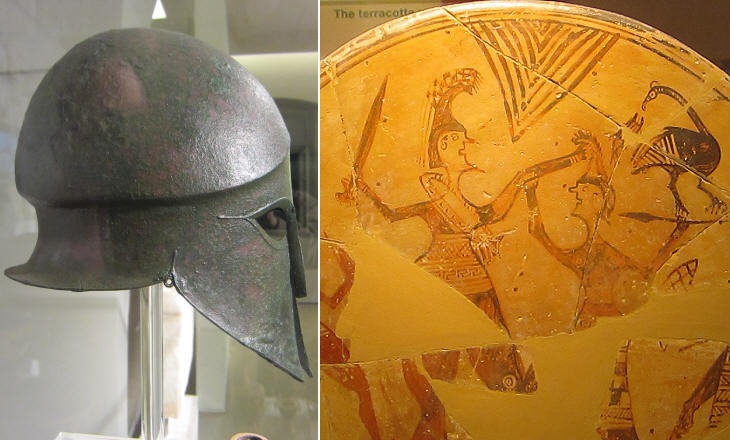 (left) Bronze helmet; (right) dish showing a fight between two important warriors (exhibits at the Museum of Nauplia which were found at Tiryns)

Warfare at the time of ancient Tiryns was mainly based on hand-to-hand combats; chariots were used to move about in the battlefield and the Greeks, notwithstanding Apollo, Diana (and Eros) were not skilled archers. The stamina required by such combats was so high that it did not leave much space for mercy; the losing warrior clasped the knees of his opponent in order to plead mercy, but often to no avail.
After this he sprang on Laogonus and
Dardanus, sons of Bias, and threw them from their chariot, the one
with a blow from a thrown spear, while the other he cut down in
hand-to-hand fight. There was also Tros, the son of Alastor, he came up
to Achilles and clasped his knees in the hope that he would spare
him and not kill him but let him go, because they were both of the
same age. Fool, he might have known that he should not prevail with
him, for the man was in no mood for pity or forbearance but was in
grim earnest. Therefore when Tros laid hold of his knees and sought
a hearing for his prayers, Achilles drove his sword into his liver,
and the liver came rolling out, while his bosom was all covered with
the black blood that welled from the wound. Thus did death close his
eyes as he lay lifeless.
(The Iliad - Book XX - Translation by Samuel Butler). 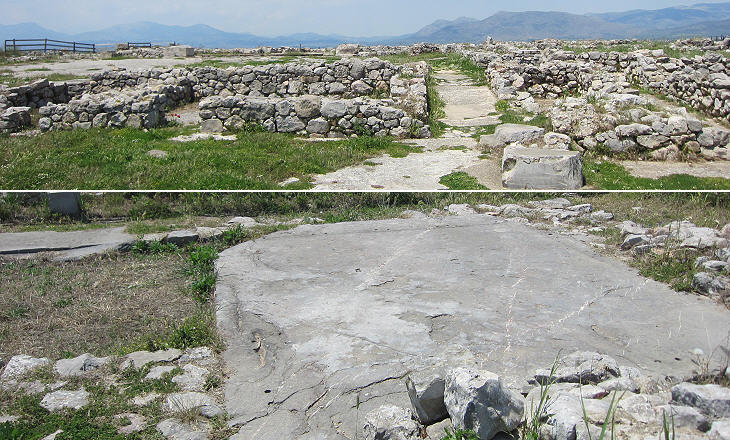 Upper Citadel: (above) ruins of the palace; (below) monolith floor of a bathroom

The rooms and courtyards which made up the palace have been identified by the lower part of their walls which was built with big stones; they were covered by timber roofs. Archaeologists have been able to draw detailed maps showing the different areas, including those which were reserved to women and a bathroom. 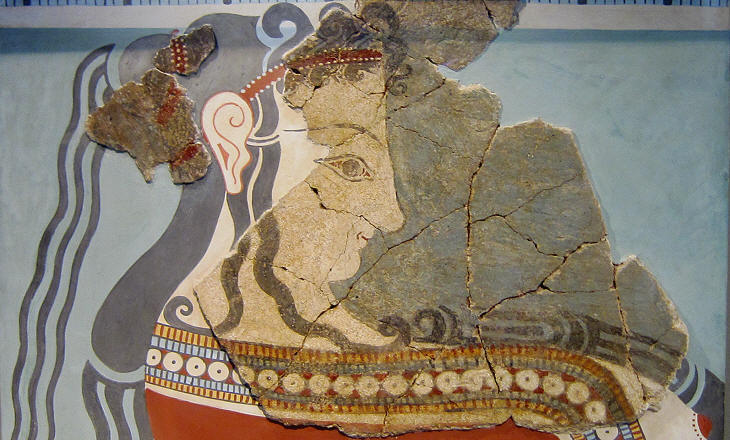 While the ruins of the palace are rather silent on the way of living of its inhabitants, some small fragments of frescoes show the level of refinement achieved by the Mycenean civilization. In ancient Greece, long hair was a symbol of wealth and power; Zeus, Apollo, Venus wore long hair; only a very wealthy woman with many servants could have the elaborate hair of the lady portrayed in this fresco, which similar to the others found at Tiryns indicates a Minoan (Cretan) influence. 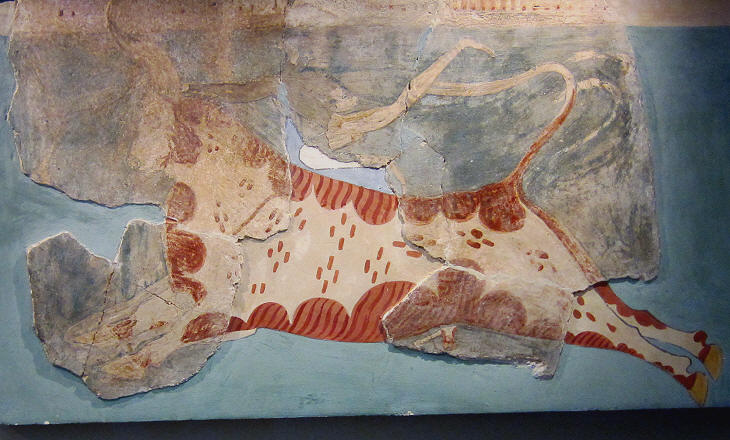 The Cretan influence is evident also in a fresco showing a bull-leaping exercise; bulls were worshipped in Crete and they were a symbol of the island; the Seventh Labour of Hercules (the first one outside Peloponnese) was the capture of the Cretan Bull and it is interpreted as representing the conquest of Crete by the Greeks of the mainland; this political and military development is also narrated in the myth of Theseus and the Minotaur. Bull-leaping was most likely part of ceremonies or rites of passage for young men. The Lower Citadel is the only part of Tiryns where ordinary houses have been identified; it was most likely added to the Upper Citadel at a later time. The decline of Tiryns is approximately set in ca 1100 BC when tribes coming from the north invaded Argolis. The site was eventually abandoned in the Vth century BC when according to tradition its inhabitants were forced to relocate to Argos. 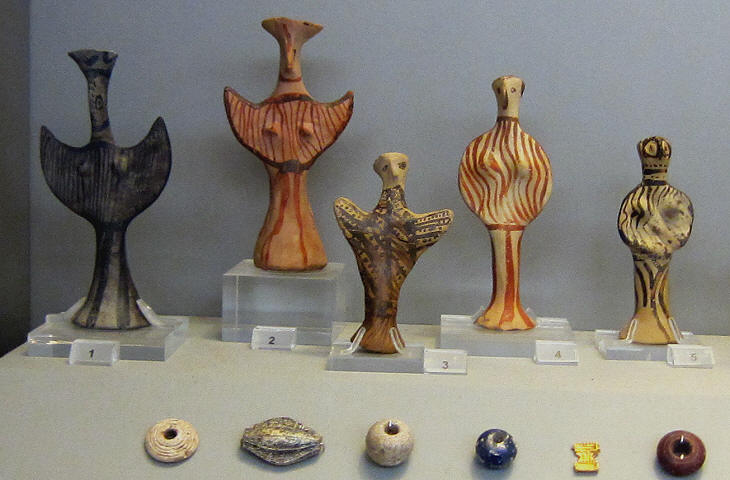 Figurines and necklace beads found at Tiryns (now at the National Archaeological Museum of Athens); a copy of exhibit No 2 is included in the personal museum of ancient art of the author of this page

The image used as background for this page is based on a coin portraying Hercules and the Nemean Lion shown in an exhibition at the Alpha Bank of Nauplia.