- Argos
(Bronze coins minted during the reign of Emperor Antoninus Pius and showing two Labours of Hercules:
The Apples of the Hesperides (left) and The Cattle of Geryion (right).
The coins were found at Alexandria, Egypt and are now at the Numismatic Museum of Athens)

If the development of the myth of Heracles/Hercules were to be represented with the graph of a function it would show an ever growing curve which starts in ca 1400 BC and reaches its apex in 287 AD when co-emperors Diocletian and Maximian defined their roles in the Tetrarchy system by assuming the titles of Iovius (the former) and Herculius (the latter); in this way Hercules, the hero known for his strength and who was not a member of the original Olympian pantheon was almost made equal to Jupiter, the Father of Gods and men.
The Twelve Labours of Hercules are a series of popular tales which shed light on the early development of civilization in continental Greece and its spreading to other Mediterranean countries. The first six labours take place in the Peloponnese, the next five occur outside Greece in locations which span from Colchis in the Black Sea to Spain, the twelfth and last is set in the Underworld. Of the first six labours, three take place in Argolis, a region of northern Peloponnese which is named after the ancient town of Argos. 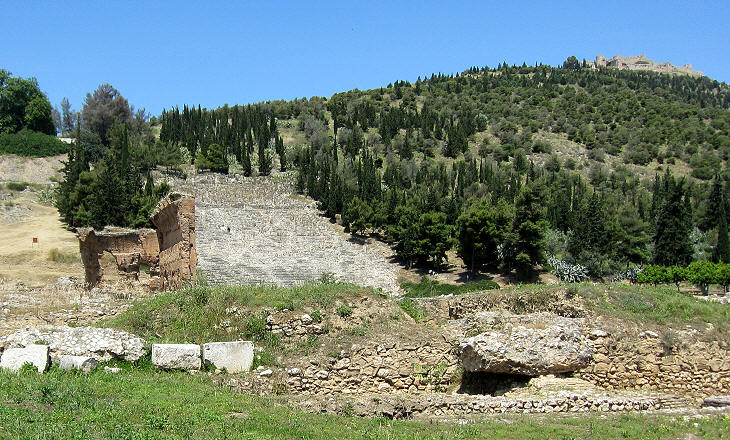 View of the baths and of the theatre from the agora; at the top of the hill: the ancient acropolis which became a Byzantine/Venetian/Ottoman fortress

With nearby Mycenae and Tiryns, Argos was an important centre of the Mycenaean civilization which flourished in Argolis between 1600 and 1100 BC; unlike the other two towns Argos did not fade from history when the region was invaded by tribes coming from the north; it continued to be an important town which often sided with Athens against Sparta; it was conquered by the Macedonians and eventually by the Romans. The most ancient buildings were replaced by new ones and the ruins which currently can be seen in the archaeological area date from 600 BC to 200 AD; only on the acropolis at the top of a high hill, walls similar to those of Mycenae and Tiryns can be seen. XVth century BC vases found at a cemetery near Deiras (now at the National Archaeological Museum of Athens); you may wish to see vases found at Akrotiri on the island of Thera or Santorin

Ancient Argo had a second acropolis on a low hill to the east of the main one; it is called Deiras (ravine) and archaeologists have found several graves there containing vases with offers.
In Homer's Iliad, Agamemnon, the leader of the Greeks at the Trojan War, is indicated as the King of Mycenae (and Diomedes as the King of Argos), but for Aeschylus who wrote a trilogy on the events which followed Agamemnon's return from the war, he was the King of Argos, this perhaps because he wrote in the Vth century BC, when Argos was an important town and Mycenae a very minor settlement. 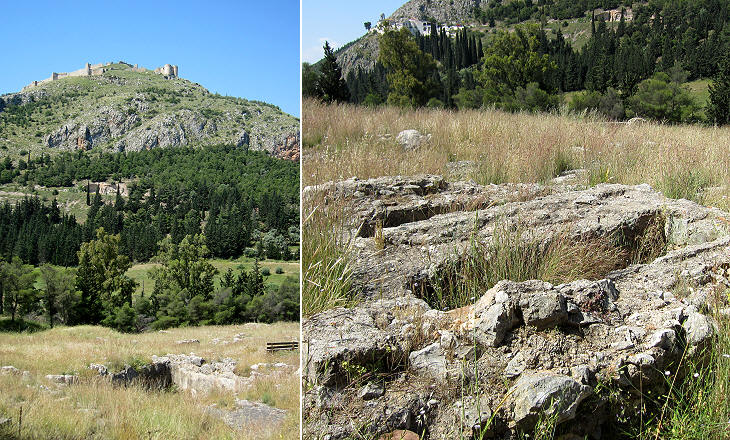 Deiras: site of the Sanctuary of Apollo Deiradiotes opposite the main acropolis

The importance of Argos is proved by the fact that the town had its own small sanctuary at Delphi (it was decorated with kouroi); Argos built a temple to Apollo on the hill of Deiras; a virgin priestess issued oracles after tasting the fresh blood of a sacrificed lamb. 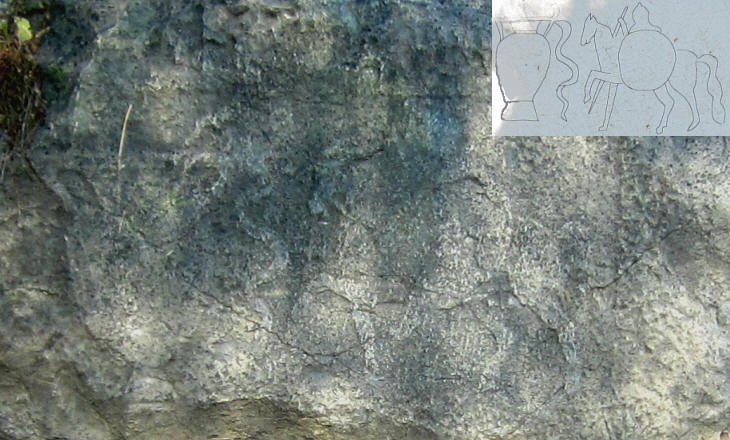 A terrace above the theatre of Argos is thought to have been the criterion of the town, i.e. the open air site where justice was administered; several barely visible reliefs on the rocks indicate that the location was dedicated to underground deities to which offers were made. Of particular interest is a relief showing a vase, a snake and a horseman; the meaning archaeologists give to it is that the snake is sent by the underground deities to thank the horseman for his offerings (in the vase). This theme became popular because of funerary reliefs known as the Thracian/Macedonian Horseman and eventually it influenced St. George's iconography. 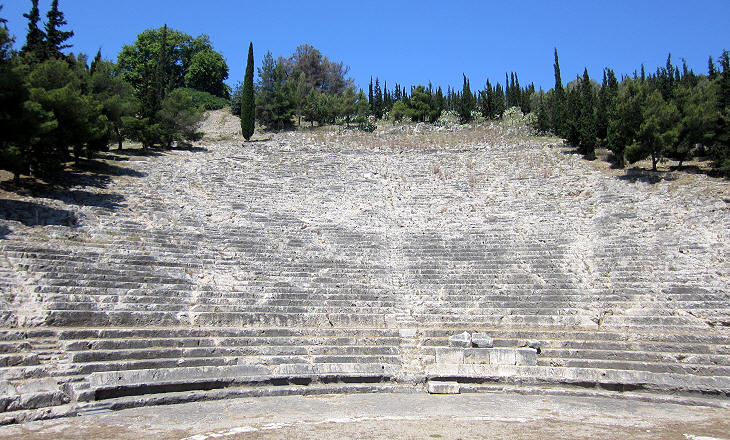 Theatre: view from the stage

The very large size of the theatre is due to the relocation of the Nemean Games to Argos; this occurred in the IVth century BC. The games were initially held at Nemea, the small town near which Hercules slayed a lion, his first labour. The Nemean Games were held every two years, they did not coincide with the Olympics Games and the Isthmian (Corinthian) Games and they included musical and poetry contests. 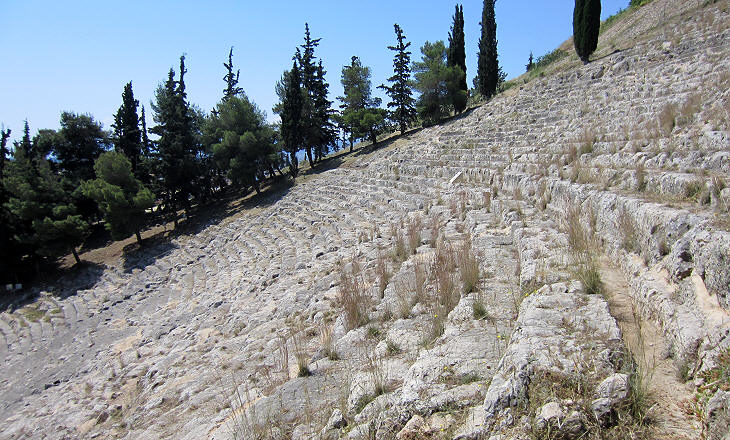 As far as size is concerned the theatre is comparable to that of Epidaurus, the best known Greek theatre, but it does not enjoy the symmetry and acoustics of the latter; its steepness is similar to that of Pergamum. 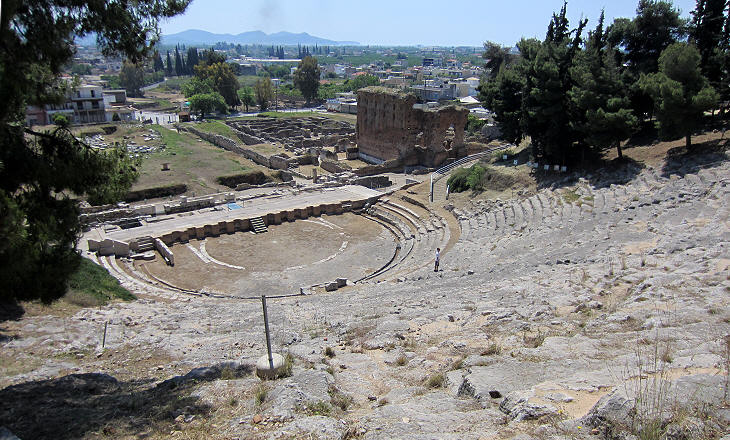 Theatre: view from the top

The theatre was modified by the Romans who built a proscaenium, a decorated wall behind the stage; at a later time they also made changes required by the introduction of gladiatorial and animal fights.
The archaeological area is located at the foot of the hill in the northern section of the modern town; Argos was entirely rebuilt after having been set on fire by the Ottomans during the Greek Independence War; English traveller John Madox so described it in December 1821: Argos is at the foot of the mountain looking over the plain and is said to contain from eight to ten thousand inhabitants. The town was almost in ruins, having been set fire to when the Turks retreated from it, and nothing now remained in many parts but bare walls.
At that time Argos had already been replaced by Nauplia as the main town of the region. 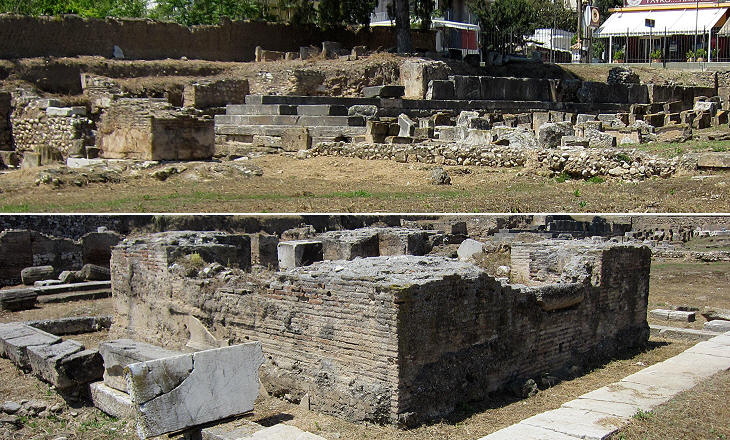 (above) A section of the agora; (below) square nymphaeum

Excavations in the agora (city centre) of ancient Argos have led to the identification of buildings of different periods; archaeologists were helped in their work by the description of the town made by Pausanias, a geographer who lived at the time of Emperor Antoninus Pius; from a literary viewpoint his Description of Greece is regarded as a poor text, but his detailed accounts of sites he personally visited have been found to be very accurate.
Argos was described by Homer as being a "thirsty" town (The Iliad - Book IV:170 - Translation by A.T. Murray); in 125 AD Emperor Hadrian visited it and soon after an eighteen mile long aqueduct was built to provide the town with an ample supply of water (also for the functioning of its new baths). A square fountain was built in the agora; in origin its brickwork structure was covered with marble slabs; archaeologists found out that it had been turned into a small house. 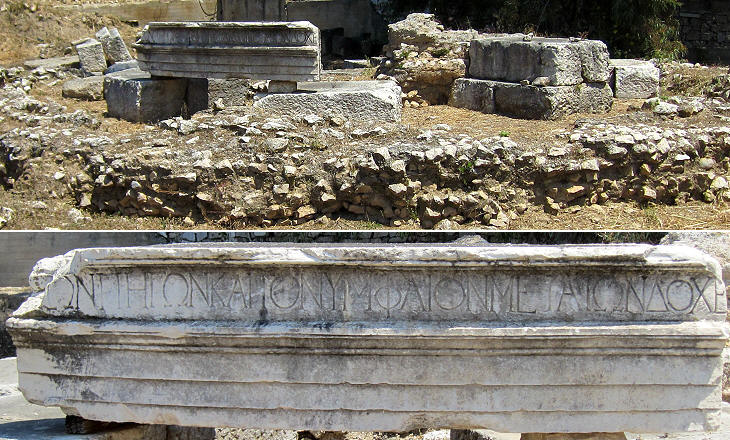 (above) Tholos/Nymphaeum in the agora; (below) detail of the inscription making reference to Antoninus Pius

After the construction of the aqueduct a circular temple built upon a sacred well was turned into a monumental fountain, which was depicted in coins issued by Emperor Antoninus Pius.
Hadrian and the emperors who came after him wanted to be associated with these life-sustaining facilities; at Olympia, almost at the same time, Herodes Atticus, an adviser to Hadrian and Antoninus Pius built a large nymphaeum which was decorated with statues of members of the imperial family. Nymphaeum near the theatre

The most monumental fountain of Argos was built at the site where the aqueduct reached the town near the upper end of the theatre; a colossal statue of Emperor Hadrian stood at the centre of the fountain; the emperor was portrayed as Diomedes holding the Palladium, the image of Athena which protected the City of Troy and which Diomedes stole together with Ulysses, thus paving the way to the fall of the city.
All the hope of the Danaans (Trojans) and their confidence in beginning the war always rested on the help of Pallas. But from the time that the ungodly son of Tydeus (Diomedes) and Ulysses, the author of crime, dared to tear the fateful Palladium from its hallowed shrine, slew the guards of the citadel-height, and, snatching up the sacred image, ventured with bloody hands to touch the fillets of the maiden goddess  from that time the hopes of the Danaans ebbed and, stealing backward, receded;
(Virgil - The Aeneid - Book II - Translation by H. R. Fairclough) The excessive size and unsatisfactory acoustics of the theatre led to the construction of an odeon, a covered auditorium for musical and theatrical performances; it was built on the site of a previous small open air theatre or most likely a bouleterion, a place for public meetings. The odeon in its final aspect (early IIIrd century AD) could seat an audience of 1,800. 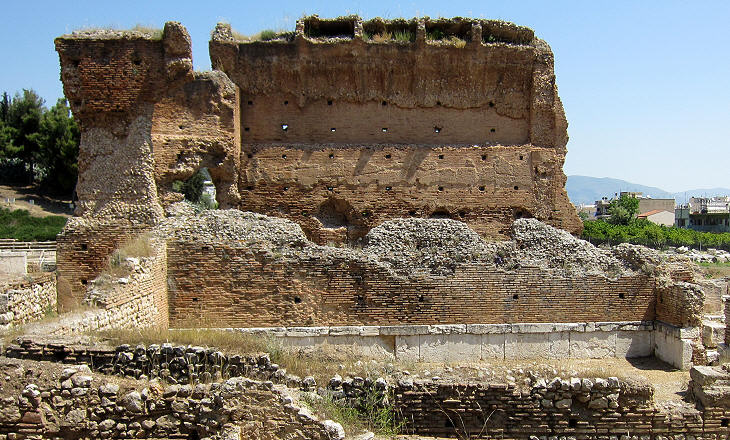 The baths are the most imposing monument of Roman Argos and they show the level of wealth of the town; their large halls are one of the most impressive examples of Roman construction techniques based on brickwork on Greek soil (you may wish to see the Temple to Serapis in the Lower City of Pergamum).
The baths were decorated with coloured marbles including "cipollino" columns which came from Karistos. 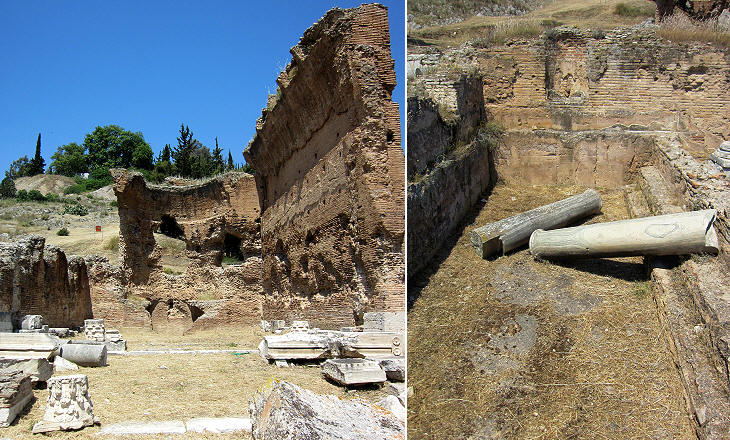 Other views of the baths showing capitals and columns

The image in the background of this page is based on a funerary relief showing Hercules at the National Archaeological Museum of Athens.