Andromache of Epirus (came to the Sanctuary) for the sake of offspring. She slept in the Abaton and she had a dream. It seemed to her that a handsome boy lifted up her dress, and after that the god touched her belly with his hand. After the dream a child was born from Andromache and her husband Arybbas. (translation of an inscription found at the Asklepion of Epidaurus - IVth century BC). A skeptical observer could think of a different story to explain the birth of Andromache's child; the cause of infertility lay with Arybbas and Andromache found a handsome boy to sleep with at Epidaurus. 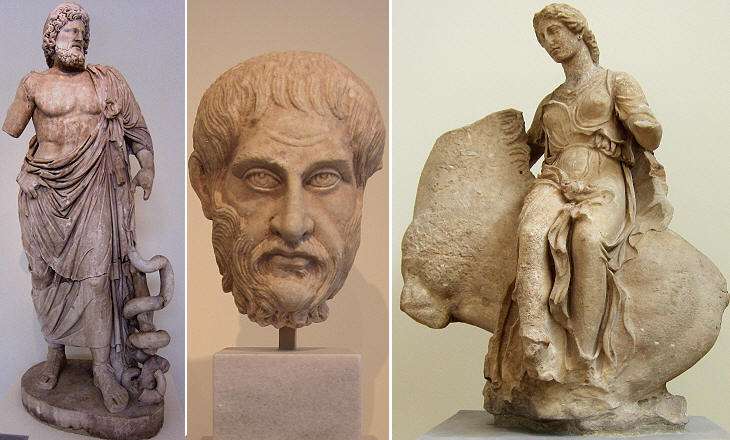 National Archaeological Museum of Athens: (left/centre) statues of Asclepius as a god (with the entwined serpent) and as a philosopher; (right) statue of a Nereid on horseback rising from the sea (ca 380 BC) from the Temple of Asclepius at Epidaurus

Epidaurus, an ancient city-state on the Aegean Sea near, but not part of Argolis, acquired great fame because of its Asklepion (or Asclepeion), a sanctuary dedicated to Asclepius (Aesculapius for the Romans), the god of medicine. The sanctuary was located several miles inland in a sacred grove, which the inhabitants of Epidaurus claimed was the god's birthplace. Asclepius, son of Apollo and Coronis, was taught the art of healing by his father and by Cheiron, a centaur who was the teacher and tutor of other gods (e.g. Dionysus) and of many heroes (e.g. Achilles, Perseus, Theseus, Jason). In a page on the Asklepion of Kos (it opens in a separate window) you can learn about the dramatic circumstances of Asclepius' birth.
The Asklepion of Epidaurus acquired such fame as a healing centre that when the Romans came in touch with the Greek world they sent envoys to the sanctuary asking for a statue of Asclepius and for one of the sacred snakes; they then built a temple to the god on Isola Tiberina. 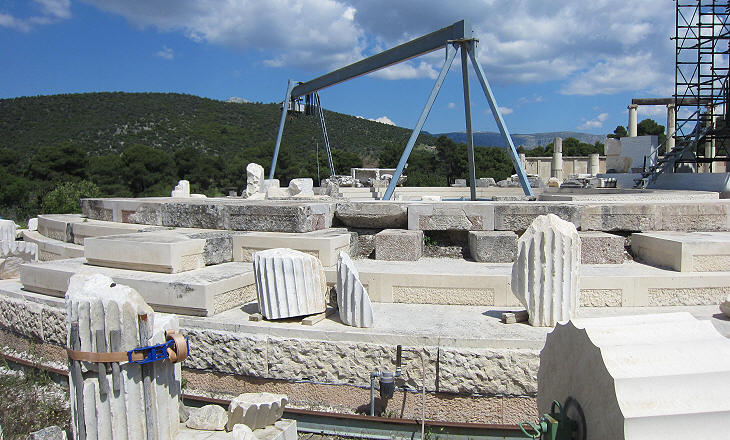 Tholos (IVth century BC by Polykleitos the Younger)

The heart of the sanctuary was a circular building (tholos) surrounded by columns and with five inside round walls which formed a sort of maze; the exact purpose of the maze is uncertain, but it was probably associated with ceremonies involving the patients; in the Asklepion of Pergamum which was built later archaeologists have identified a circular corridor with niches where the patients slept.
The tholos housed snakes which had been tamed and were the symbol of the god, probably because snakes shed their skin and this was seen as a symbol of rejuvenation. 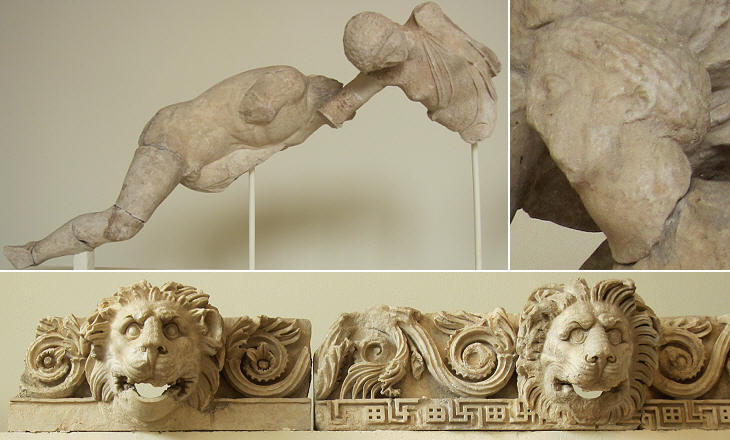 National Archaeological Museum of Athens: (above) statues portraying an Amazonomachy (a legendary battle between Greeks and Amazons) from the Temple of Asclepius at Epidaurus; (below) cornice of the tholos

Similar to Delos, births and deaths were not allowed to occur inside the sacred grove; a small temple dedicated to the god was built at almost the same time as the tholos; archaeologists have found parts of the elaborate decoration of the two buildings, which however was not directly related to Asclepius or the practice of medicine. 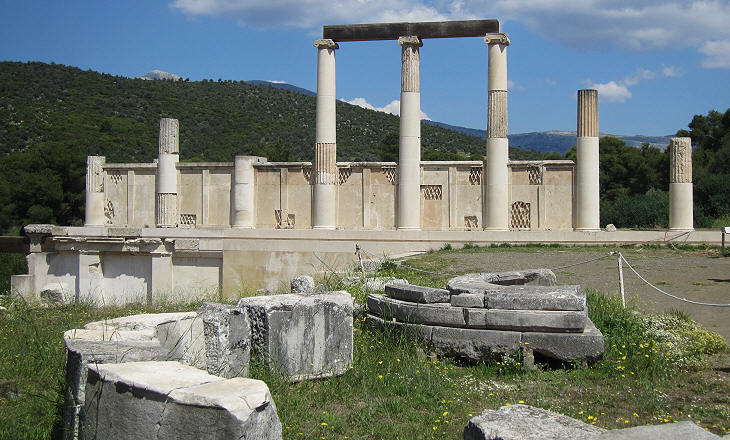 The abaton mentioned in the inscription about Andromache was most likely a long building near the temple and the tholos; abaton is a Greek word meaning not accessible which indicated the part of a temple which was reserved for the priests; a synonym of abaton is adyton which at Delphi indicated the crypt from which oracles were issued. At Epidaurus patients were induced to sleep and dream (enkoimesis) in the underground hall of the abaton. Today it is thought that the sleep was induced by soporific drugs which allowed the undertaking of surgical interventions. 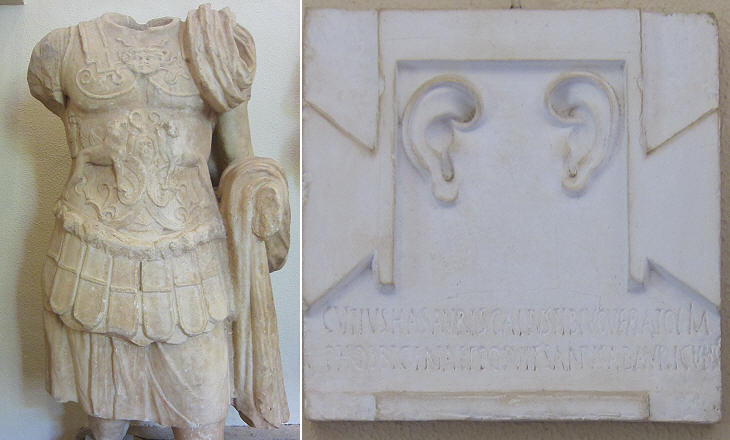 Museum of Epidaurus: (left) statue of a Roman emperor; (right) copy of a gilded Roman ex-voto by a Cutius from Gaul; in the Latin inscription (Cutius has auris Gallus tibi voverat olim Phoebigena, et posuit sanus ab auriculis) he thanked Asclepius (referred to as son of Phoebus/Apollo) for having restored his hearing (Ist century BC)

The Roman conquest of Greece did not impact on the fame of Epidaurus, although the sanctuary was looted by Silla during the Mithridatic War. Wealthy patients came from all parts of the Empire and their votive offerings were placed on the walls of the sanctuary as evidence of the healing powers of Asclepius and of his doctors.
Cicero (De Natura Deorum - III:89) reports the following anecdote about votive offerings (with reference to the Temple of the Great Gods at Samothrace): When Diagoras of Melos was at Samothrace, he visited the sanctuary of the Great Gods who were chiefly honoured as the rescuers of sailors in distress. On this occasion a friend asked him: "You who believe that the gods do not care about human affairs, do you not see from the vast quantity of painted votive tablets how many men have been delivered from the violence of the storm through their prayers and vows and have reached the harbour safely?" "That" replied Diagoras, "is because the men who were shipwrecked and died at sea are not painted anywhere." (as reported by F. T. Van Straten in a conference on Gifts for the Gods in the Ancient World). 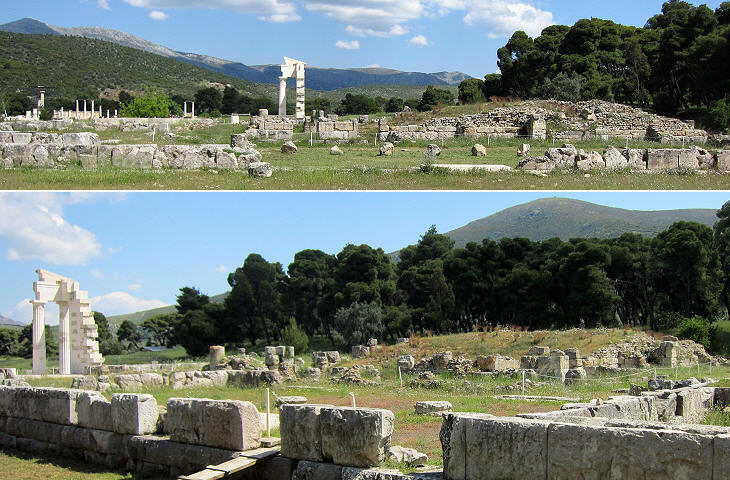 Views of the area of the Odeon (Roman period); the reconstructed columns belonged to a Temple to Hygiea, the goddess of Health

In addition to the skills of its surgeons and of its dream interpreters, the Asklepion of Epidaurus could rely on several mineral springs which were effective in curing several diseases. So the sanctuary did not have the aggravating atmosphere of a hospital, but the light-hearted aspect of a XIXth century spa with even an odeon for the afternoon concert in case of rain. 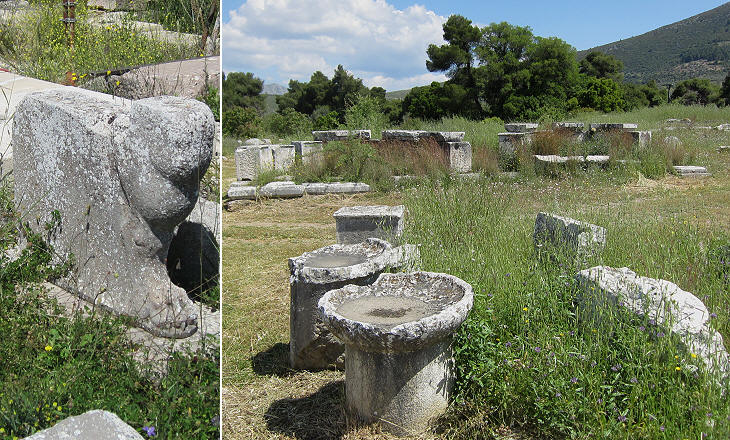 (left) Support of a bench; (right) small fountains (isolated and forming an exedra, a semi-circular recess)

Aristotle was the founder of the Peripatetic (Walk Around) School which was so named because the philosopher delivered his teachings while walking in the portico of a gymnasium in Athens. This practice was very common in the ancient world; at Epidaurus patients could leisurely walk along alleys with benches and fountains (or spend the day at the baths).
Greek archaeologists are in the process of reconstructing parts of the temples and facilities of the Asklepion to attract some of the visitors who come to the archaeological site to see the famous theatre. 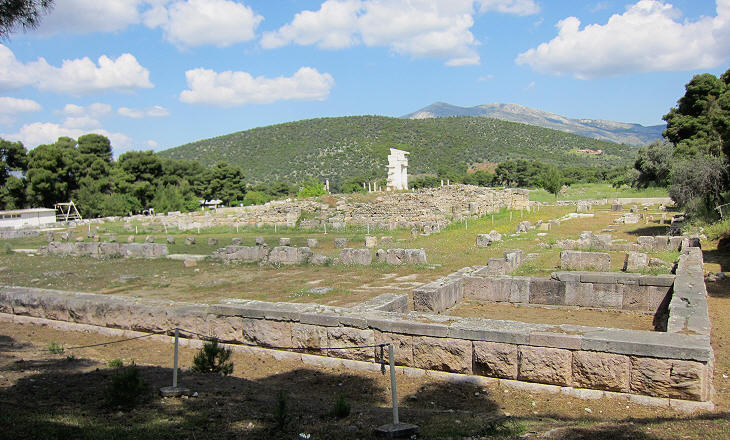 A hostel very similar to the Leonidaion of Olympia housed the wealthiest patients; their rooms were located around four identical courtyards; the building is thought to have had two storeys. Most likely the Asklepion had its Season which coincided with the spring and summer months during which patients could live in tents or other forms of temporary accommodation. 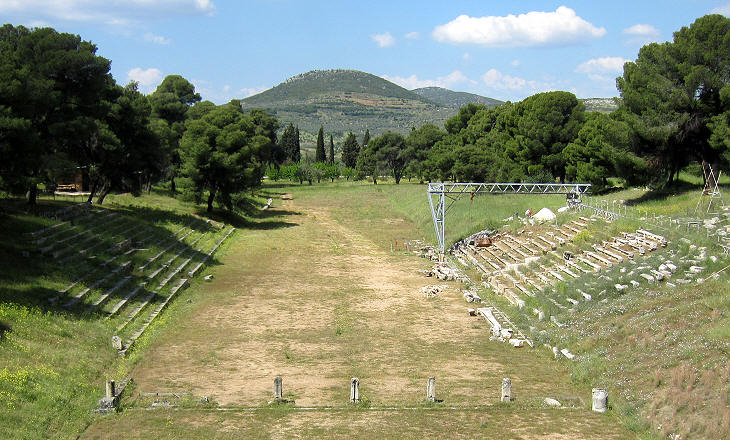 Games were held at the Asklepion every four years; they took place after the end of the more important Isthmian Games held at Corinth. They were known for the poetry contests in the theatre, rather than for the races in the stadium. 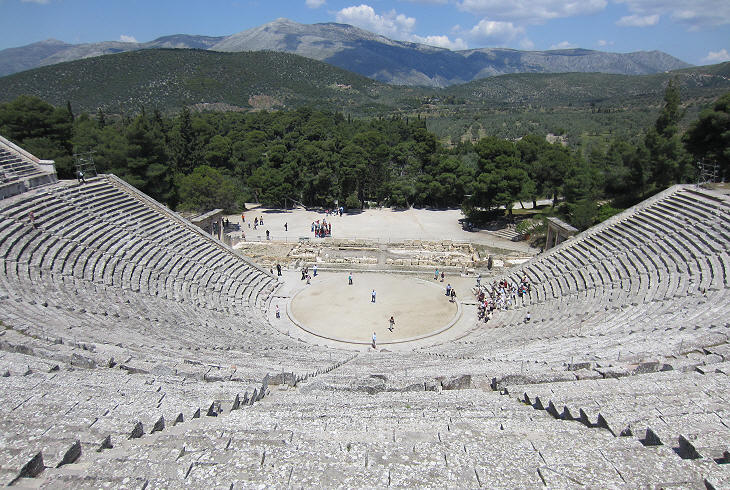 Theatre: central view from the very top of the building

Pausanias, a geographer who wrote an accurate description of Greece in the IInd century AD reports that the sanctuary and all the ancillary buildings were in good condition when he visited them: The Epidaurians have a theatre within the sanctuary, in my opinion very well worth seeing. For while the Roman theatres are far superior to those anywhere else in their splendour, and the Arcadian theatre at Megalopolis is unequalled for size, what architect could seriously rival Polykleitos in symmetry and beauty? For it was Polykleitos who built both this theatre and the circular building. [2.27.5] Pausanias Description of Greece - Translated by W. H. S. Jones. "We are extremely fond of good dinners, music, and dancing; we also like frequent changes of linen, warm baths, and good beds, so now, please, some of you who are the best dancers set about dancing, that our guest on his return home may be able to tell his friends how much we surpass all other nations as sailors, runners, dancers, minstrels. Demodocus has left his lyre at my house, so run someone or other of you and fetch it for him." On this a servant hurried off to bring the lyre from the king's house, and the nine men who had been chosen as stewards stood forward. It was their business to manage everything connected with the sports, so they made the ground smooth and marked a wide space for the dancers. Presently the servant came back with Demodocus's lyre, and he took his place in the midst of them, whereon the best young dancers in the town began to foot and trip it so nimbly that Ulysses was delighted with the merry twinkling of their feet.
(..)
Then Alcinous told Laodamas and Halius to dance alone, for there was no one to compete with them. So they took a red ball which Polybus had made for them, and one of them bent himself backwards and threw it up towards the clouds, while the other jumped from off the ground and caught it with ease before it came down again. When they had done throwing the ball straight up into the air they began to dance, and at the same time kept on throwing it backwards and forwards to one another, while all the young men in the ring applauded and made a great stamping with their feet. The Odyssey - Book VIII - translation by Samuel Butler.
This description of how King Alcinous entertained Ulysses is perhaps the oldest literary record of a theatrical performance; it tells us that dance preceded the development of tragedy and comedy; orchestra, the circular space around which theatres were built, derives from orkheisthai a Greek verb meaning to dance.
The first Greek tragedies were set in an open space and probably the actors played in the orchestra; in a second phase the texts included references to houses and temples and this led to building a raised stage with a background scene having some doors. Eventually the space of the orchestra was reduced to move forward the stage. The theatre of Epidaurus is one of the few which retain a full circular orchestra. Theatre: view from the stage

One of the Dialogues of Plato deals with the origin of good poetry (human, based on skill and knowledge, or divine, based on inspiration) and it provides an indication of the fame of the Epidaurus poetry contests:
Socrates
Welcome, Ion. Where have you come from now, to pay us this visit? From your home in Ephesus?
Ion
No, no, Socrates; from Epidaurus and the festival there of Asclepius.
Socrates
Do you mean to say that the Epidaurians honour the god with a contest of rhapsodes (1) also?
Ion
Certainly, and of music (2) in general.
Socrates
Why then, you were competing in some contest, were you? And how went your competition?
Ion
We carried off the first prize, Socrates.
Translation by W.R.M. Lamb. - (1) Reciters of epic poems. (2) Music included poetry.
Many of the visitors to the theatre test its excellent acoustic; based on a small sample taken in May 2011 it seems that Antony's speech in Shakespeare's Julius Caesar (Friends, Romans, countrymen, lend me your ears; I come to bury Caesar, not to praise him) is the preferred passage for showing one's oratory skills.
The image in the background of this page shows a silver coin found at Epidaurus and portraying Asclepius seated on a throne.