- Olympia: Hellenistic/Roman Period
(Wrestlers in a relief at the National Archaeological Museum of Athens)

If you came to this page directly, you might wish to read a page on the foundation of Olympia and of its Games first. 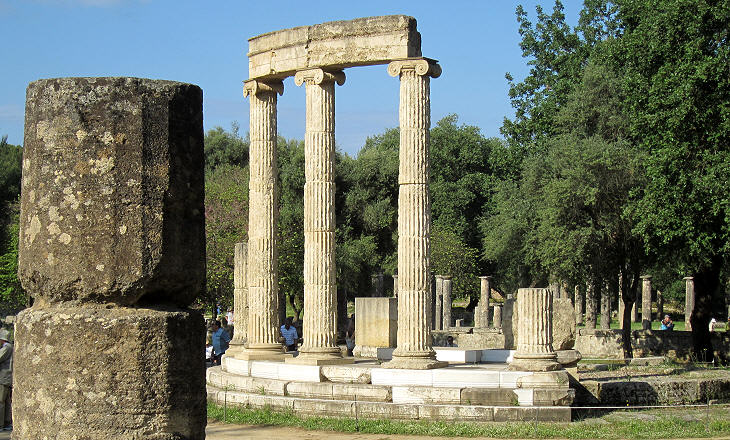 The Olympic Games faced the competition of rival games which however were held in different years in order not to coincide with the Olympic ones; the most important ones were the Isthmian Games which were held at Corinth, one of the richest towns of Greece; other games were held at Delphi and at Nemea, between Corinth and Argos, in memory of the slaying of the Nemean Lion, the First Labour of Hercules.
The Olympic Games did not suffer from the Macedonian hegemony over Greece and King Philip II commissioned a round temple which was completed by Alexander the Great, his son. Only the foundations and lower part of the walls were visible until 2004 when, on the occasion of the Athens Olympic Games, the Pergamon Museum of Berlin returned some architectural fragments which were utilized for a partial reconstruction. 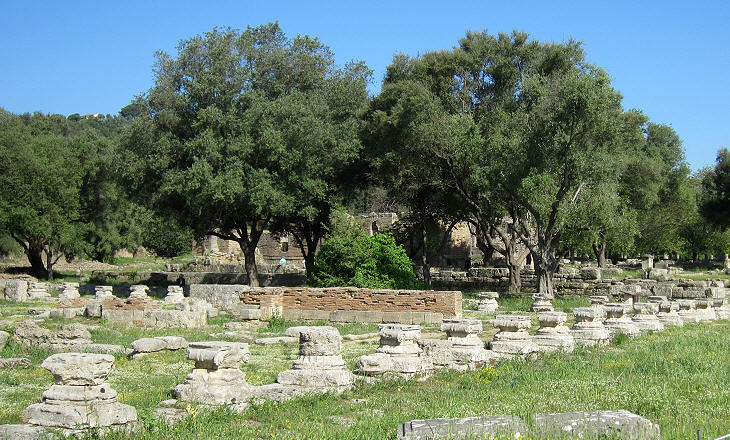 Olympia was not a town with a large permanent population, nor was it a sanctuary routinely visited by pilgrims; it sprang to life only during the games (which lasted only five days, but were preceded by ceremonies) and therefore it had facilities which were utilized only during that short period; important athletes and guests were housed in the Leonidaion, a sort of luxury hotel built by Leonidas of Naxos, a benefactor and perhaps an architect himself, in ca 330 BC; it was modified by the Romans in the IInd century AD when a pool was placed at the centre of the main courtyard.
The majority of the people who attended the games were probably housed in temporary accommodation or just slept outdoors as the Games were held during the months of July or August. Gradually the Olympic Games which were a celebration of the unity of the Greek world (a general truce allowed participants to safely reach Olympia) turned into a merely athletic contest; professional athletes and slaves were allowed to compete and in general the whole machinery of the Games acquired a business entertainment dimension. In the IIIrd century BC, when other events were added to races the athletes were given a large palaestra for practising boxing, wrestling and jumping. Museum of Olympia: (left) detail of the statue of an emperor; (right) statue of Poppaea Sabina, Emperor Nero's second wife

Athletes from Rome took part in the Olympic Games well before the Romans established their hegemony over Greece in 196 BC; the Games continued to be held regularly until 84 BC when Silla, in order to punish some Greek towns for having sided with Mithridates VI, King of Pontus, retaliated by sacking Olympia; the 80 BC Olympic Games were held in Rome. Apart from this episode the Games enjoyed the favour of the Romans and in particular of some emperors; Emperor Nero visited Olympia during a long journey he made in Greece in 67 AD and a Roman house was built for the occasion. An exquisite statue of the beautiful wife of the emperor was found in the Heraion. 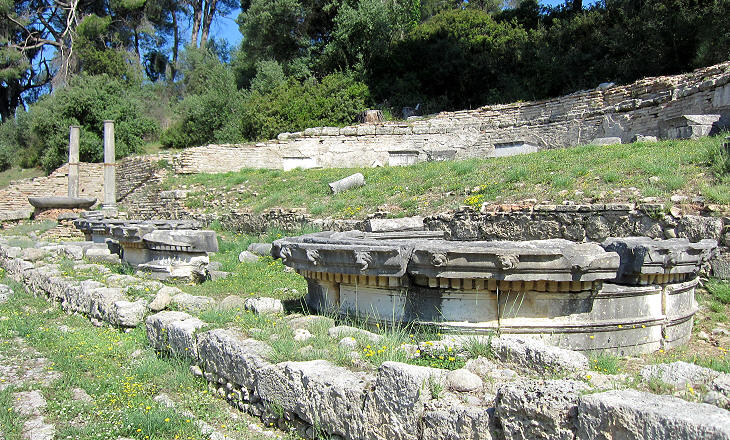 Nymphaeum (monumental fountain); in the foreground the upper part of an aedicula, a small circular temple

Emperors Hadrian and Antoninus Pius favoured Olympia and in 160 an aqueduct was built to supply the town with water so that a monumental fountain could be built between the Heraion and the terrace where the treasuries stood. Herodes Atticus, a friend of the emperors commissioned its construction; it was decorated with niches housing statues of the imperial family and of his own. Two small aediculae at the side of the main basin housed the statues of Herodes Atticus and of Antoninus Pius (or perhaps of Marcus Aurelius, his successor). 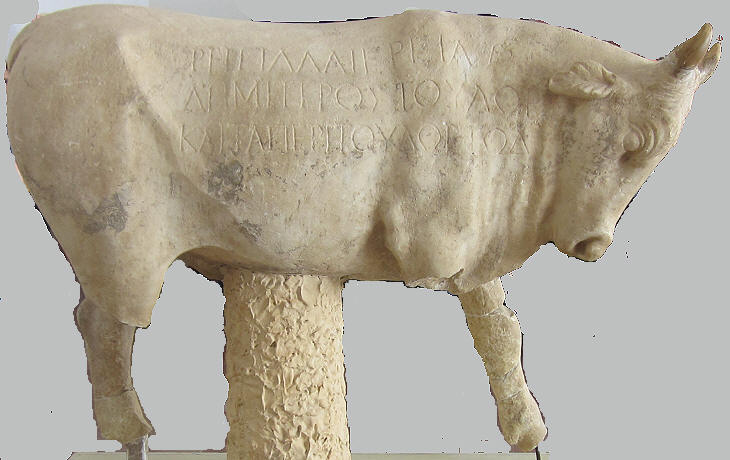 Museum of Olympia: statue of a bull which stood at the centre of the nymphaeum with an inscription indicating it was dedicated to Zeus by Annia Regilla

Herodes Atticus belonged to a wealthy Athenian family and he married Annia Regilla who belonged to an even wealthier Roman family; in addition to the nymphaeum at Olympia Herodes Atticus built a large odeon at Athens, a villa on the Via Appia Antica and a nearby tomb. The couple spent most of their time in Greece including Olympia where Annia Regilla was given a position of priestess. 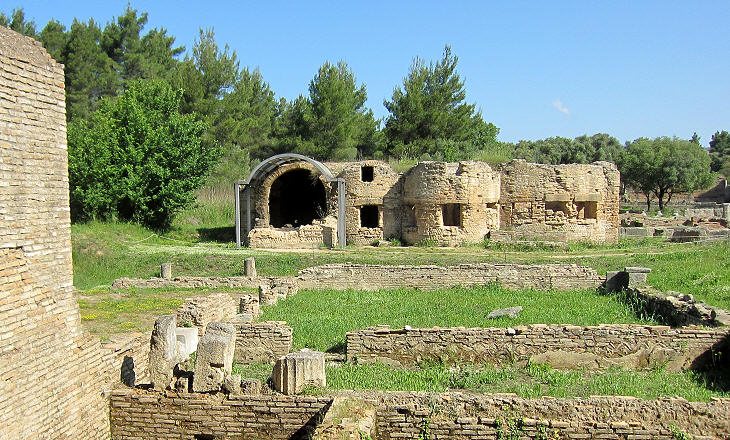 Archaeological excavations at Olympia were started by unearthing the area of Altis, the sacred precinct where the two main temples and the treasuries stood; they were subsequently expanded to include ancillary buildings for the athletes; in recent years a large Roman guesthouse has been found near Leonidaion; it included private baths with traces of mosaics; the buildings are dated IIIrd century AD so they can be regarded as one of the last additions to Olympia. 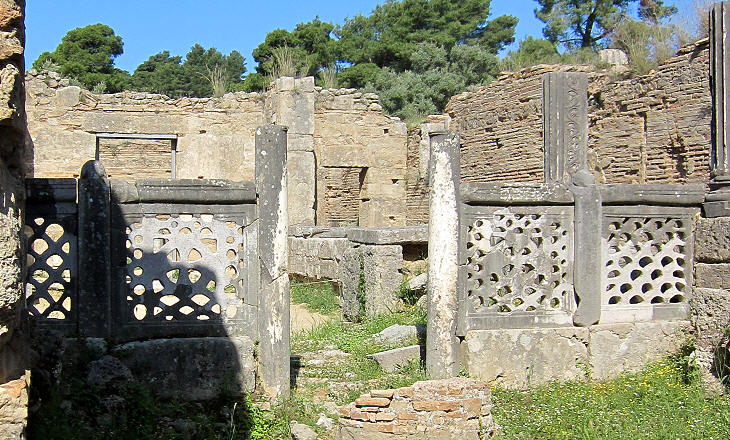 The Olympic Games of 393 were the last ones because Emperor Theodosius decreed their end, in the frame of his religious policy. Deprived of its purpose Olympia declined; its temples were purposely damaged and the ancient statues made of precious materials were taken away; a church was built on the foundations of Phidias' Workshop and the Roman baths were utilized for a grape press and a glass factory; naked athletes no longer competed for a wreath of olive leaves (as the one shown in the image in the background of this page - from a funerary relief in the National Archaeological Museum of Athens).

Return to: page one.