Delphi acquired such an importance that the Greek town-states set aside their rivalries and agreed on establishing a joint management (Amphictyonic League) of the Oracle; a council of 24 members representing 12 town-states presided over the administration of the territory belonging to Delphi and over the arrangements for the Pythian Games. 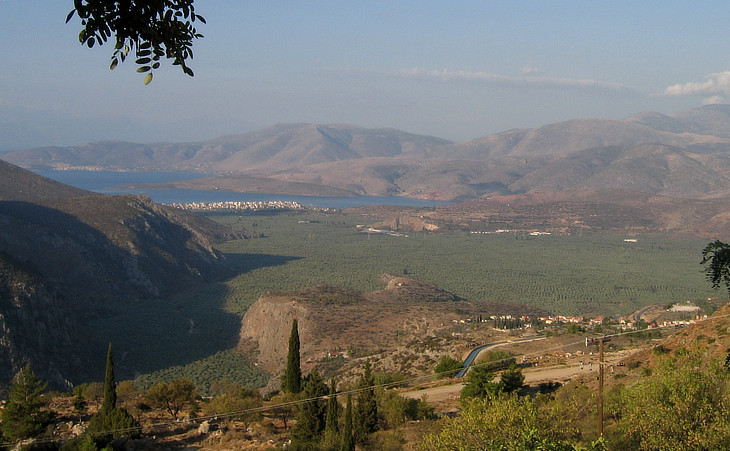 The plain of Salona/Amfissa, the Gulf of Corinth/Lepanto and the modern town of Itea

(January 1676) We passed between the Stadium, and the Clefts above the Town, and presently began to mount, making many turns backward and forward, to get a little ground in height. But I being light, made no great matter of it, chusing rather to go on foot, and have my Horse led, than to venture my Neck by a stumble. So crossing all the ways, I had often time to sit down, before my Comrades came to me, to view the Plains of Salona, and the Gulph of Lepanto below me.
A journey into Greece by George Wheler, Esq., in company of Dr. Spon of Lyons - 1682
We left the monastery early in the morning, and descended into the vale. (..) Here, as we travelled along, we had fresh occasion to regard with wonder the rough and romantic situation of Delphi; the rock rising prodigiously high with precipices, some perpendicular, between us and the village, and still towering up behind; the summits intruding into the blue sky. The small stream of the Pleistus, instead of pursuing its way to Cirrha and the sea, was absorbed among the olive-trees, vineyards, and plantations.
Richard Chandler - An account of a tour made at the expense of the Society of dilettanti - 1775
(February 1806) All the side of Parnassus which slopes to the Pleistus is cultivated: around Kastri, with olives, which are also grown along the banks of the river wherever there is any level space or easy slope.
William Martin Leake - Travels in northern Greece - 1835
The territory belonging to Delphi included the valley of the River Pleistos from its source at Mount Parnassos to its mouth in the Corinthian Gulf. The lower part of the valley and the coastal plain are an immense olive-grove which seen from Delphi resembles a green sea. 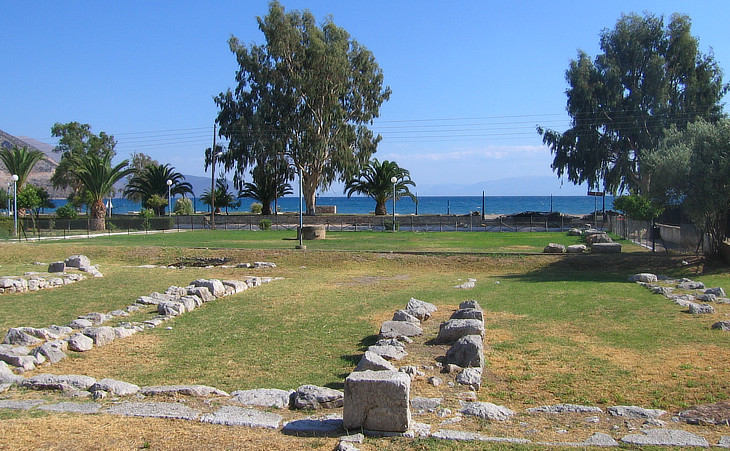 Kira: site of the ancient harbour

Delphi was distant sixty stadia, or seven miles and a half from the sea at Cirrha. Cirrha continued to be the port of Delphi in the time of Pausanias. It had then a temple of Apollo. On the way to it was the Hippodrome, or course for the Pythian horse-races. Chandler
Most of the pilgrims reached Delphi by sea: they landed at Kira (next to the modern town of Itea) on the Corinthian Gulf; the distance between Kira and Delphi is very short and this meant that the inhabitants of Peloponnese and of Corinth had a pretty easy access to the Oracle; a road along the southern flank of Mount Parnassos linked Delphi with Thebes. 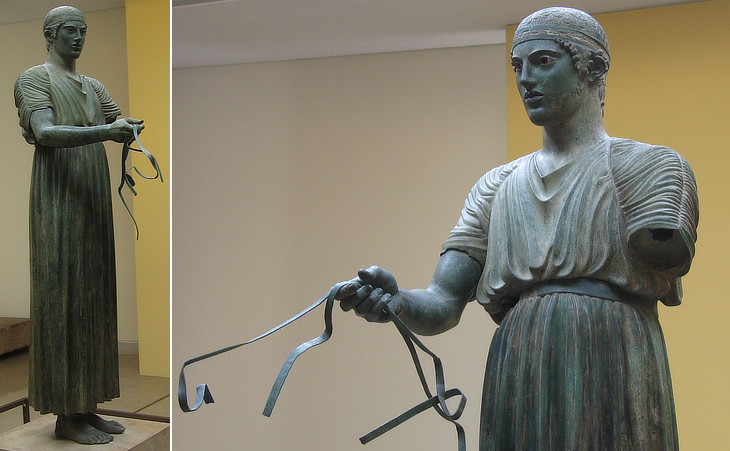 Museum of Delphi: The Charioteer, the winner of the chariot race at the Pythian Games (a detail is shown in the image used as background for this page)

The bronze statue of the Charioteer which was found in 1896 near the Temple to Apollo is regarded as the masterpiece of the early Greek Classical period: it is a very intriguing statue: it celebrated Polyzalos, tyrant of Gela, a Greek town in southern Sicily, who won the chariot race at the Pythian games; fragments of four bronze horses were found during the excavations; they were assumed to be part of the whole monument; however the young man portrayed in the statue is not supposed to be Polyzalos, but a charioteer employed by him; the artist who cast the statue in separate pieces was extremely talented and skilled in the rendering of the garment, of the hair, of the feet; the fact that he portrayed the charioteer in such a rigid pose, that he inclined the head to one side, that he gave the young man a staring look and a modest demeanour, have led some scholars to believe that the Charioteer was not alone and that a statue of Polyzalos stood on its left. You may wish to see a marble statue portraying a charioteer which was found in 1979 at Motya in Sicily. Museum of Delphi: (left) Agias, winner of the "pancration" contest (a mix of boxing and wrestling) at the Olympic and Pythian Games; (centre/right) Antinous, the favourite of Emperor Hadrian

The greater part of the statues having been of brass, were then probably melted for the sake of converting them to purposes of vulgar utility. The works in marble, although many of them may have been broken, are more likely to have escaped entire destruction; and it is difficult to believe that many valuable remains of sculpture as well as architecture are not still concealed beneath the surface of the ground at Delphi. Leake
The extensive excavations carried out since the end of the XIXth century were rewarded by the finding of some very fine statues; the statue of Agias was a contemporary marble copy of a bronze by Lysippos, one of the great sculptors of Classical Greece.
The statue of Antinous is among the finest ones commissioned by Hadrian: the face was polished and greased to enhance its whiteness and it makes an extraordinary contrast with the reddish colour of the hair. 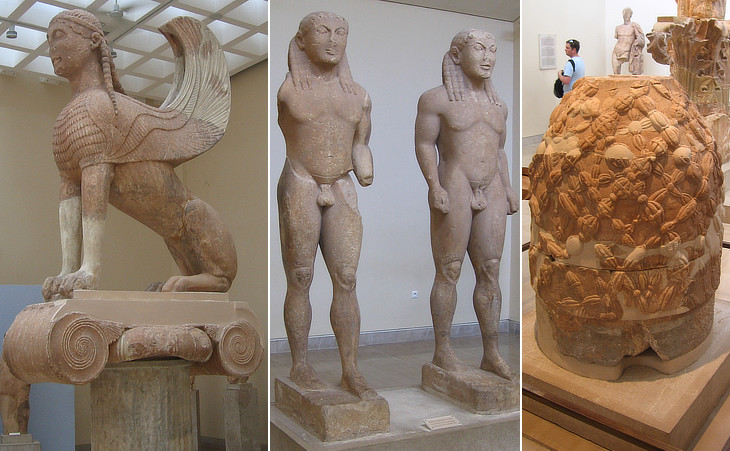 Museum of Delphi: (left) Sphinx of Naxos; (centre) "Kouroi" of Argos (see other "kouroi" which were found at Sounion); (right) "omphalos" of Athens

Greek towns competed for offering the finest works of art to the Oracle of Apollo in the hope that they would be placed inside or very near the Temple.
The pan-Hellenic sanctuary of Delphi, where the oracle of Apollo spoke, was the site of the omphalos, the 'navel of the world'. (..) According to myth, it was the meeting point of two eagles released by Zeus, one to the East and one in the West.
From the UNESCO synthesis of the universal value of Delphi which in 1987 was added to the World Heritage List.
Greek mythology has often more than one account about an event. An alternative version to the founding of Delphi, because of the intervention by Apollo, was attributed to Zeus. He sent eagles from the two ends of the world to meet at its centre: they met on the Fedriades: so Delphi was regarded as the omphalos (navel) of the world and in the area near the sanctuary several conic navel-stones have been found: one of them is covered by the agrenon, a kind of thick net: a reference to how Zeus was saved by his mother Rhea: she deceived Chronus by giving him a stone wrapped in cloth to swallow, rather than their child. Asclepius, Apollo's son and god of medicine was often portrayed at the side of an omphalos (see two statues in Rome). 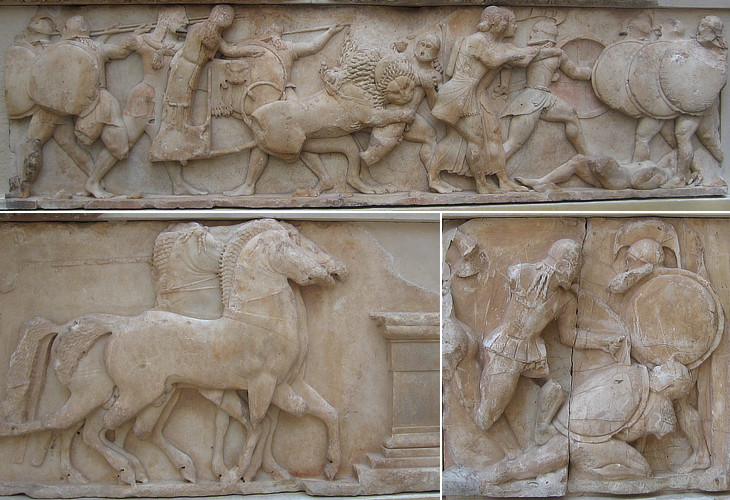 Museum of Delphi: Treasury of Sifnos: (above) north frieze portraying Heracles and a Gigantomachy (see this event in a sarcophagus from Perge); (below-left) south frieze; (below-right) north frieze

Some of the towns who had a "treasury" at Delphi decorated it with reliefs. Those of the Treasury of Sifnos stand out for their excellence. Archaeologists believe that they were not made on the site, but they were commissioned to sculptors living in the island and then shipped to Delphi, because their marble was quarried in Paros, a nearby island.

While the inhabitants of Sifnos chose to portray events which were common to all Greeks, those of Athens preferred to celebrate Theseus, the legendary founder of their city and the slayer of the Minotaur, whom they paired with Heracles, the demigod who was renowned for his Twelve Labours.

With the decline of the Greek town-states, Delphi fell under the influence of the kings of Macedonia: in 168 BC Perseus, the last king, in the third Macedonian War was defeated at Pidna by the Roman consul Lucius Aemilius Paulus; the Romans had already extended ther influence over Greece in 196, but they preferred to appear as liberators of Greece from the Macedonians. Aemilius Paulus ordered that a pillar, erected to support a golden statue of Perseus, should be used instead to celebrate his victory at Pidna: in the reliefs the Macedonians were identified by studded round shields, the Romans by oblong ones.
During the Roman period the Oracle continued to enjoy a great reputation: Cicero followed the advice received at Delphi and abandoned his political career to pursue his oratory skills and earn the fame he was seeking. The emperors promoted restorations and embellishments including that of the theatre which was decorated with reliefs showing the labours of Hercules, but Emperor Nero deprived Delphi of many of its statues. 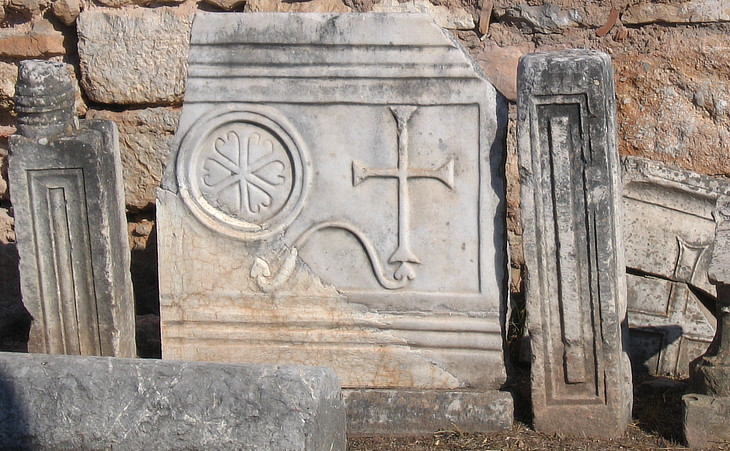 Constantine the Great proved a fatal enemy to Apollo and Delphi. He removed the sacred tripods to adorn the Hippodrome of his new city. (..) Afterwards Julian sent Oribasius (his personal physician) to restore the temple, but he was admonished by an oracle to represent to the emperor the deplorable condition of the place. "Tell him the well- built court is fallen to the ground. Phoebus has not a cottage, nor the prophetic laurel, nor the speaking fountain; but even the beautiful water is extinct." Chandler
The best known tripod of Delphi is lost, but it was depicted in many reliefs, e.g. in the House of Augustus in Rome, and frescoes, e.g. near Pompeii. The Oracle was closed by Emperor Theodosius: Delphi was deprived of its main attraction and rapidly lost importance and inhabitants, so evidence of the Christian town is limited to some Byzantine plutei or transennae (marble screens) which decorated a church.

Return to page one to see the archaeological site.