of the Vatican Palaces!
(A lion holding three pears, heraldic symbols of Pope Sixtus V in a ceiling of the Vatican Library. The sentence "De forti egressa est dulcedo" (Judges, 14, 14) - sweetness comes forth from strength - is a reference to them)

According to a survey compiled by The Art Newspaper in April 2013 Musei Vaticani ranked fourth in the list of the most visited museums of the world with more than 5,000,000 visitors in 2012. 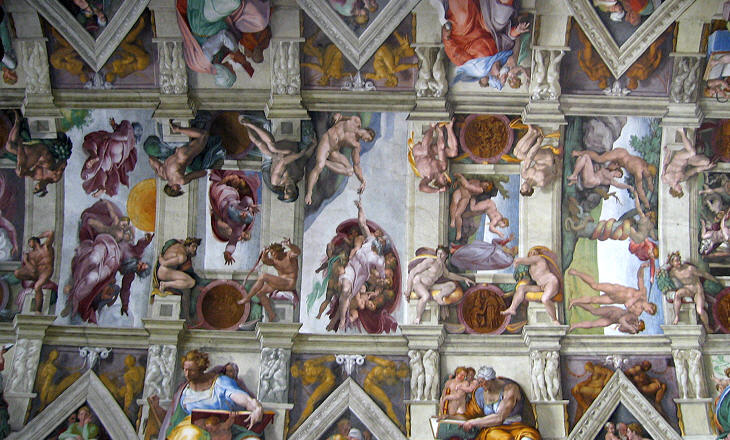 Rarely us'd, but then the Pope, and all the Cardinals, and Court of Rome appear there in great Magnificence. (..) For the Histories painted at the top of all I could not well judge of them as to That particular, or any other; for they are small Figures, at a great height, and the Chapel has not over much Light; the Vault especially, the Windows being underneath. This helps to give this Chapel the Melancholy Air it has.
Jonathan and Jonathan Richardson - Account of Some of the Statues, etc. in Italy - 1722
The buildings housing the museums, with the main exception of the Gallery of Paintings, were not designed for being visited by a daily crowd which can exceed 20,000. Every day a long and packed procession goes through long "corridors" from the entrance near Casino del Belvedere to the rear side of Palazzo Apostolico to see the Borgia and Raphael Rooms and eventually the Sistine Chapel to admire the top "must-see", the ceiling painted by Michelangelo for Pope Julius II in 1512. 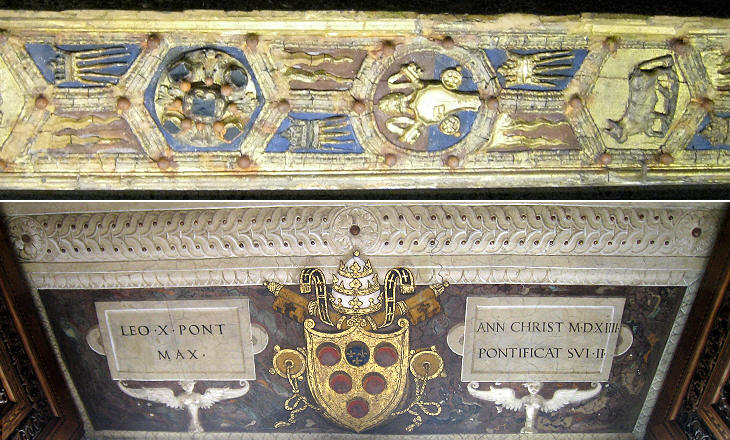 (above) Raphael Rooms: ceiling of a window with the coat of arms of Pope Leo X; (below) Borgia Rooms: detail of the ceiling with the heraldic symbols of Pope Alexander VI

First time visitors often pay little attention to the ceilings of the other rooms; they are not regarded as masterpieces and some of them are works of painters or decorators who have fallen into oblivion. Yet they make up an illustrated history book which provides information on the periods the rooms were built and shows the changes in art taste which occurred between the late XVth century (Casino di Belvedere, Borgia Rooms) and the late XVIIIth and early XIXth centuries (Museo Pio-Clementino, Braccio Nuovo) when the museums acquired their current appearance. 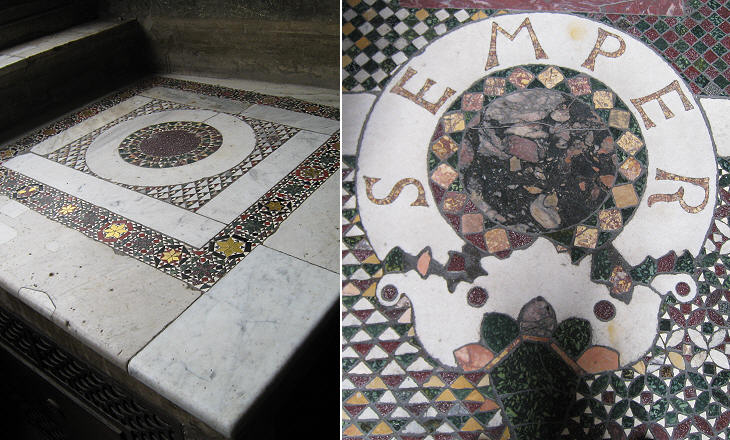 Raphael Rooms: (left) Cosmati decoration; (right) "opus sectile" (marble inlay) with the motto of Pope Leo X. Semper (always) alludes to the perpetuity of the Medici dynasty (you may wish to see it at Palazzo Vitelli alla Cannoniera in Città di Castello); you may wish to see also a shutter with the coat of arms of the Pope

Because of the crowd it is not easy to properly observe the floors, but these too contributed to the overall decoration of the rooms and are a source of information. The floors of the Raphael Rooms show that while the walls were decorated with Renaissance masterpieces, some traditional medieval patterns were still in fashion. 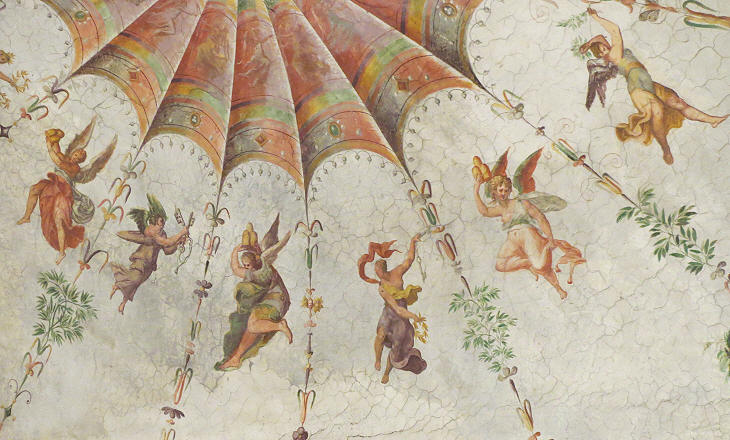 While the popes commissioned Raphael, Michelangelo and other famous painters the decoration of their apartments with frescoes which had a religious subject or illustrated great events of the history of the Church, Casino di Belvedere retained its characteristic of being a place where the popes lived in a more relaxed environment. The decoration of some rooms commissioned by Pope Julius III recalls that of his suburban villa. 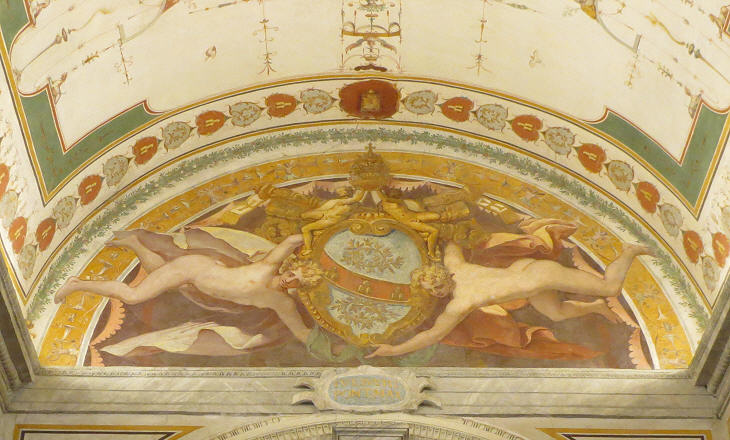 The portrayal of two putti or two angels at the sides of a papal coat of arms is very frequent, but naked young men such as those holding this coat of arms are rarely seen. Because the faces are identical it is likely the Pope asked the painter to portray his young lover, whom a satire by Pasquino described as garzoncello vago ed effeminato (beautiful and effeminate young man of poor birth). He was adopted by the Pope's brother and made a cardinal three months after the election of Pope Julius III in a specially held consistory (a formal meeting of the College of Cardinals during which the Pope creates new cardinals). The decision caused general outrage, especially after the Pope entrusted him with the running of State affairs. He was forced to revoke the appointment in the following year, because of the incompetency of the man. You may wish to see another coat of arms of Pope Julius III which is held up by two naked young men. 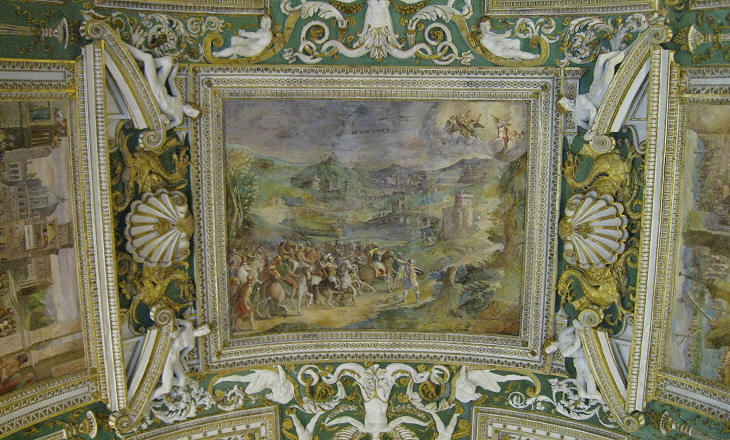 Galleria delle Mappe Geografiche : detail of the ceiling by Girolamo Muziano with a fresco depicting the Vision of Constantine at the Battle of Ponte Milvio

Pope Gregory XIII started the decoration of the long "corridors" which linked Palazzo Apostolico with Casino di Belvedere. He promoted astronomy and geography studies. He built Torre dei Venti, an astronomical observatory, above one of the "corridors". A section of the same "corridor" was devoted to the depiction of Italy in large frescoes on the walls showing detailed maps of its regions. Smaller frescoes on the ceiling show miraculous events occurred in the corresponding region painted on the walls. They were framed by a very elaborate stucco decoration which includes many dragons, the heraldic symbol of the Pope. 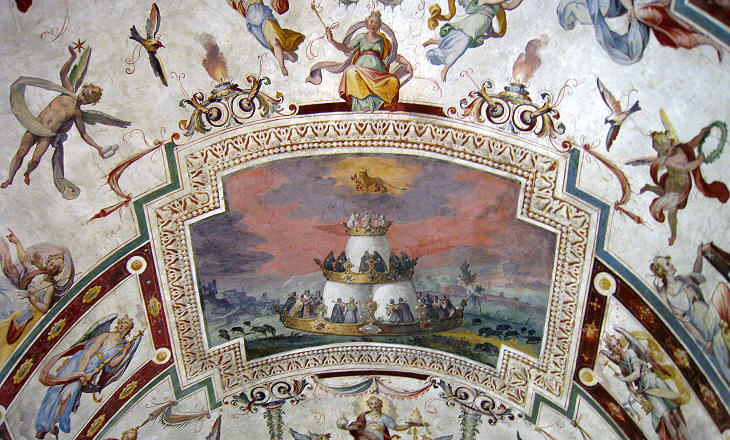 Biblioteca Vaticana - Sale Sistine: detail of the ceiling which is decorated with heraldic symbols of Pope Sixtus V including the "Trimonzio" (three mountains) which in this fresco is turned into a Holy Mountain

In the middest (of the Galleries) is the famous Librarie of the Popes and therein are many inscriptions of the Pope Sixtus Quintus who repaired it, and it is adorned with many faire pictures guilded all over.
Fynes Moryson - An Itinerary: Containing His Ten Years Travel Through .. Italy (in 1594)
Pope Nicholas V is regarded as the founder of the library. In 1587-1589 Pope Sixtus V moved the location of the Library to the storey below the Gallery of Maps. Its rooms were decorated with some very interesting frescoes depicting the progress in the construction of the dome of S. Pietro and other initiatives taken by the Pope to embellish Rome. The ceilings have many references to the heraldic symbols of the Pope. They were a star, three mountains and a lion holding pears, so painters had many ways to show their ingenuity. 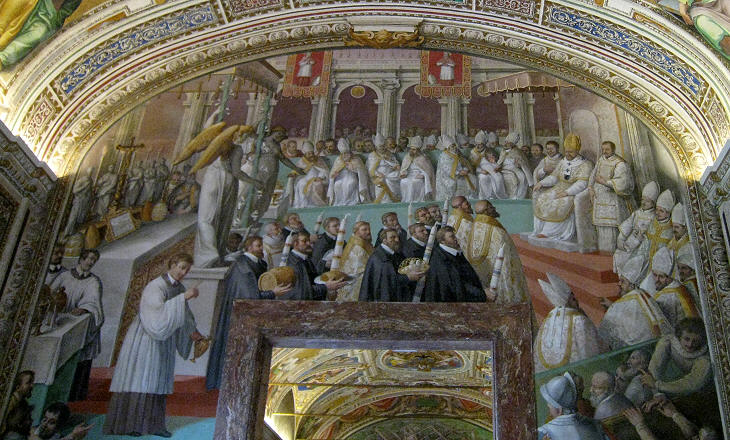 Pope Paul V enlarged the library and had the new rooms decorated in a very similar manner as the first ones. In this fresco he has his nephew Cardinal Scipione Caffarelli Borghese at his left. The fresco gives an idea of the pomp of the Papal court and reminds the viewer of the very active foreign policy of this Pope. In order to contain the Ottoman threat, he did not hesitate to establish relations with Shah Abbas, King of Persia and a fierce enemy of Sultan Ahmet I. 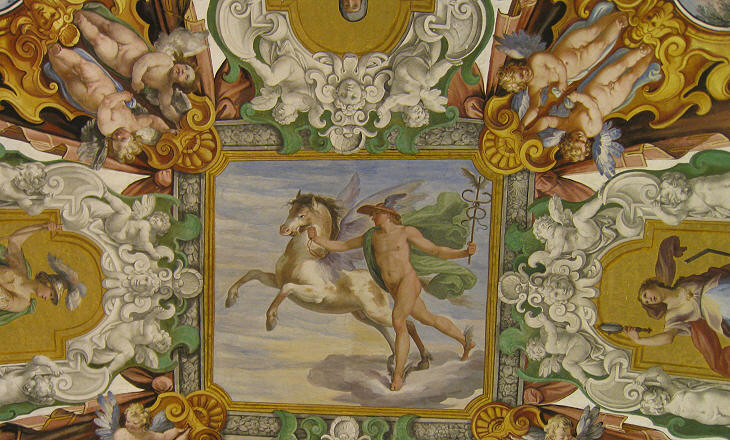 One of the rooms decorated by Pope Paul V is named after the fresco at the centre of the ceiling. The Pope and his nephew were avid collectors of ancient statues for their palace and suburban villa, but they were always careful not to suggest that they were fond of the pagan gods. The fresco needs to be interpreted in its astronomical significance. Mercury, the planet, and Pegasus, the constellation, were in conjunction when the Pope was born or when he was elected. You may wish to see the early XVIth century decoration of the interior of La Farnesina which is mainly based on the depiction of stars and constellations. 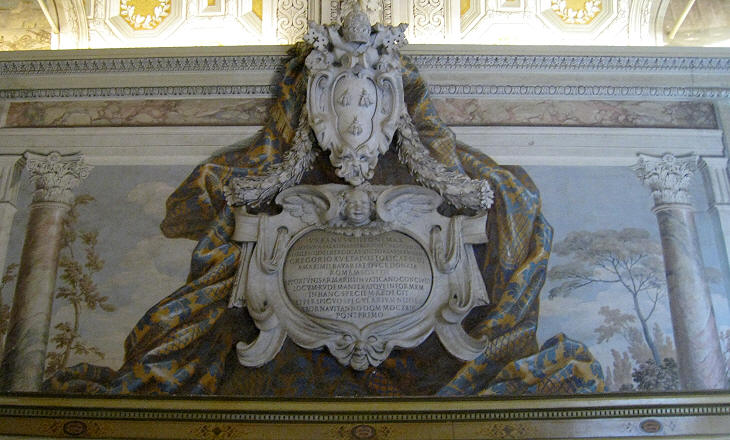 E' del poeta il fin la la maraviglia .. chi non sa stupir vada a la striglia (The aim of the poet is to surprise .. he who cannot astonish us should work in the stables). Giovanni Battista Marino was the most famous Italian poet of the early XVIIth century and his views on the purpose of art were shared by painters and sculptors.
The peak of this artistic trend was reached at the end of the century with the illusionistic ceilings of il Gesù, S. Ignazio and other Roman churches, but the desire to stupefy (and the ability to do it) can be observed also in this minor work of art. 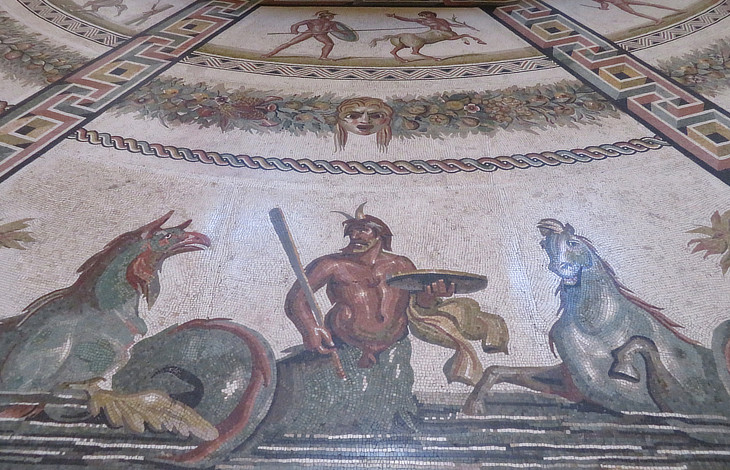 In the late XVIIIth century the Popes made changes to Casino di Belvedere so that it could properly house their large collection of antiquities. The floors of some of the rooms were decorated with large ancient mosaics found in that century. They were extensively restored. That of Otricoli required six years of work by Gioacchino Falcioni, an antiquarian, who added some sections in order to fit the size of the room. 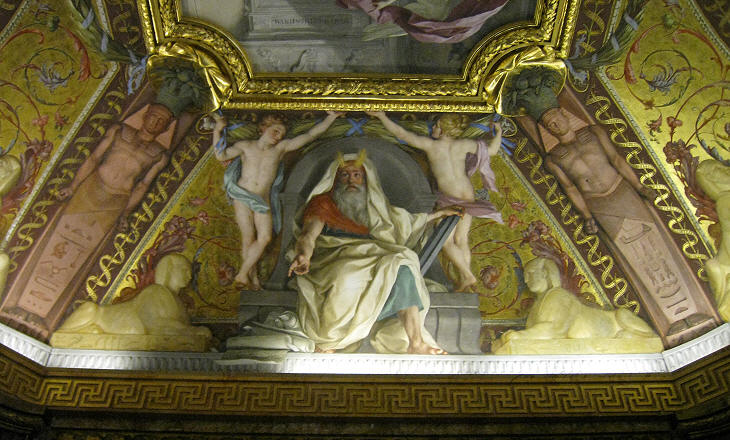 Museo Gregoriano Egizio (founded in 1839 by Pope Gregory XVI): Moses in a context of Egyptian statues

The ceilings of some of the new rooms were decorated with paintings which tried to combine a religious subject with the statues on display in the room. Today the decoration of the ceiling and the contents of a room do not always match. Several of the "Egyptian" statues in this particular room were actually Roman statues commissioned by Emperor Hadrian for his villa. 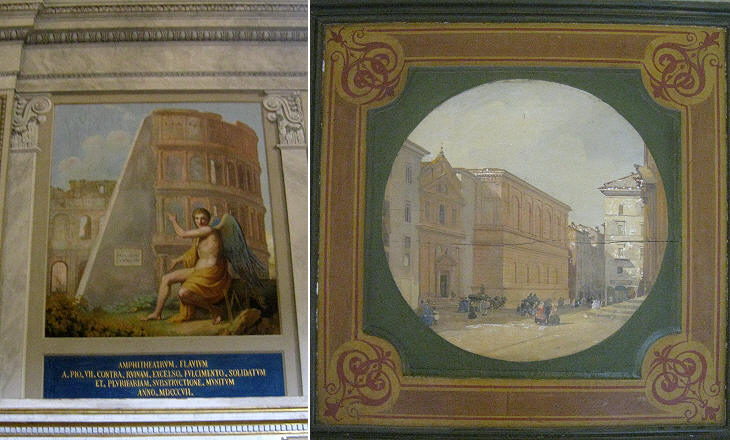 In the XIXth century the limited resources the Popes could devote to the embellishment of Rome were absorbed by the reconstruction of S. Paolo fuori le Mura after a devastating fire which occurred in 1823. This explains the modesty of some of the initiatives of Pope Pius IX which are celebrated by small paintings on cupboards he donated to the library.

The image in the background of this page shows another detail of the ceiling commissioned by Pope Julius III at Casino di Belvedere.

Other Days of Peace pages:
A Sunny Day in Villa Borghese
At the Flea Market
At the Beach
Voicing Your Views ..... and feeling better
Christmas in Rome
Eating Outdoors
Celebrating the Foundation of Rome
A visit to Roseto di Roma
The procession of La Madonna de Noantri
Running the Marathon
Watching the Parade
Finding Solace at the Protestant Cemetery
Attending 2007 July Events
Rome's Sleepless Night
Attending Winter Ceremonies
Jogging at Valle delle Camene
Sailing on the River to see the Bridges of Roma
An October Outing to Marino
Attending a Funeral ...and enjoying it!
A Special Spring Weekend
Embassy-hunting in Parioli
Celebrating Eritrean Michaelmas in Rome
Visiting Rome at Dawn
Visiting Rome in the Moonlight
Visiting Rome on a Hop-on-Hop-off Bus
Visiting Multi-ethnic Rome
Baroque Fireworks
Playing in the Snow at the Janiculum
Watching the Pride Parade
Visiting the Movie Sets at Cinecittà
Reading Memoirs of Hadrian at Villa Adriana
Walking the Dog at Valle della Caffarella
Reading Seneca at the Baths
Spending the Last Roman Day at St. John Lateran's Cloister
Reading Ovid at St. Peter's