A sharp decline in international trade was one of the main effects of the 1929 World Depression. All countries raised their tariffs and tried to reduce imports by developing local production. Italy was among the countries which first developed filmmaking, but in the early 1930s its movies could not face the competition of American and German ones. 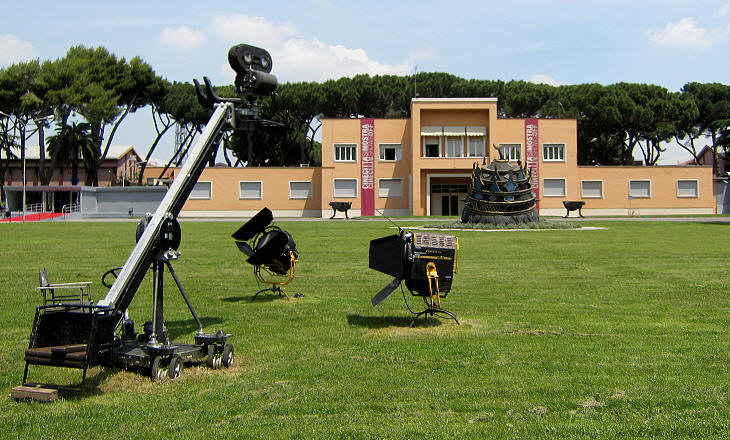 In 1935 a fire destroyed the studios where most Italian movies were produced and the Italian Government decided to finance the construction of new studios in line with technological developments. The decision had political motivations because at the time Italy was isolated by the international community for having invaded Ethiopia. The Ministry of Fascist Propaganda hoped that Italian movies would transmit regime views and celebrate its accomplishments and in 1937 the new studios were inaugurated by Prime Minister Benito Mussolini.
Luckily the design of Cinecittà (the new studios) was commissioned to Gino Peressutti, an architect who refrained from the pomposity which characterized the works of some of his colleagues. Later on he was involved in the design of EUR, a new quarter of Rome. 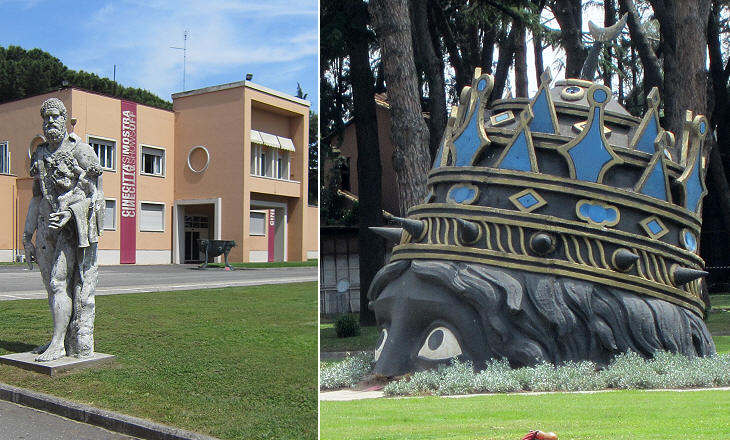 (left) Statue portraying Hercules; (right) gigantic head of a woman designed by Danilo Donati for the opening scene of Fellini's "Casanova" (for which Donati won the 1976 Academy Award for Best Costume Design)

Making movies (or "cinema" as this activity is known in France and Italy) has been called the Seventh Art, with reference to the Six Arts (architecture, sculpture, painting, music, dance and poetry) proposed by philosopher Georg Wilhelm Friedrich Hegel.
It is an ephemeral art and all the sceneries designed for a movie are bound to be destroyed after they have been utilized. At Cinecittà some of the statues made for a film set have escaped their fate and they embellish its open spaces. 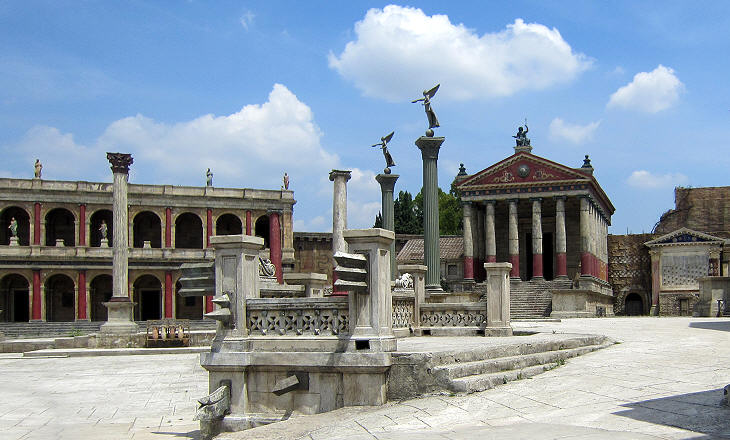 Sets of the "Rome" TV series - The Roman Forum

Cinecittà was built in a location which at the time was very remote from Rome, so that modern buildings and other signs of urban development were not visible from the large area behind the studios which was used for reconstructing fictional surroundings. In May 2012 this area was still mainly occupied by a reconstruction of Ancient Rome for a TV series, the filming of which ended in 2007. Reconstructions of such a scale are bound to become less and less frequent, because of the use of new digital technologies. 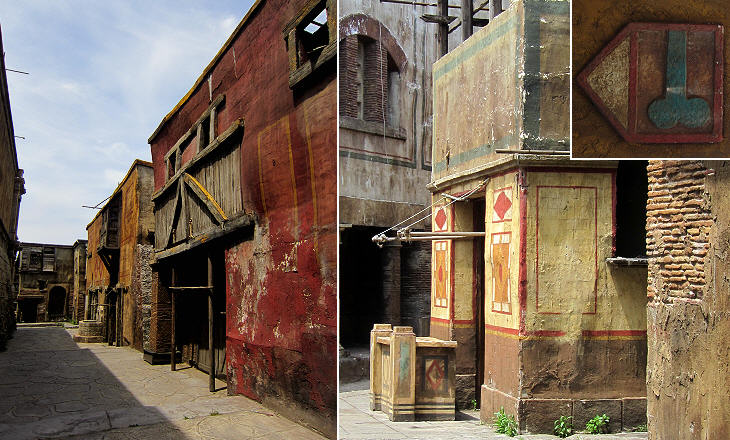 Sets of the "Rome" TV series: (left) the Subura, a lower-class area of ancient Rome; (right) a "thermopolium"); (inset) which says what the BBC series was all about

A TV series on Ancient Rome is not a history treatise. The events it narrated were set at the time of Julius Caesar (Ist century BC), but the design of the grand buildings which decorated the imaginary Forum of Rome was based on temples, arches and basilicas of the time of Emperor Antoninus Pius (IInd century AD). 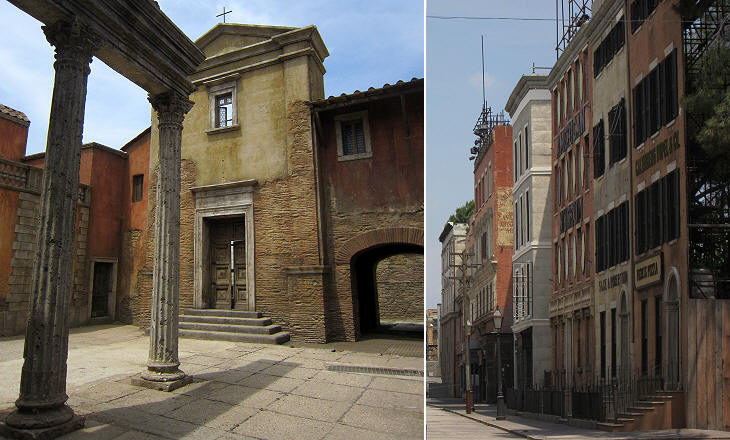 (left) A corner of XVIth century Rome; (right) set for "Gangs of New York" a 2002 movie by Martin Scorsese

Renaissance Rome with its intrigues and great artists has provided the background for many international movies, but Cinecittà retains the illusory background of 1862 New York, of Dutch canals and other foreign locations as well. Movie making is a very global business and Cinecittà faces the competition of studios in countries where labour is cheaper, but it can offer the wide range of skills needed for an accurate reconstruction of the most diverse and challenging locations. 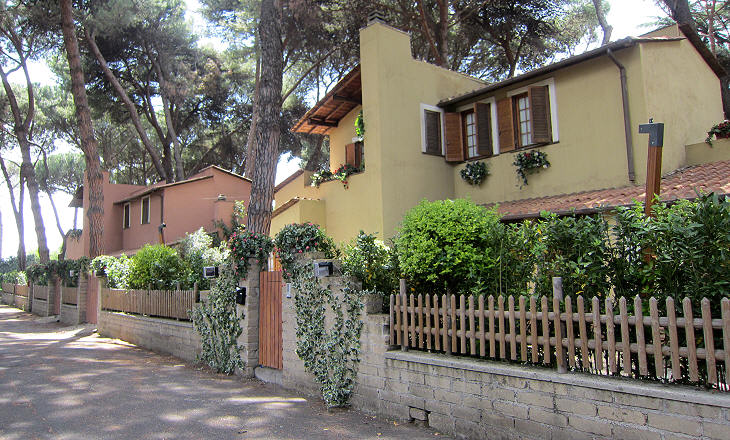 Set for "Un Medico in Famiglia" (A doctor in the family), an Italian TV series

The umbrella pines of Cinecittà often need to be hidden (as in the case of the set for Gangs of New York) but they prove useful in giving a Roman touch to a popular Italian TV fiction.
At close range the homes where the key characters live seem smaller than they should be in reality, but the angle by which the scenes are shot makes them seem to be the right size.
Cinecittà has a series of large studios where the interiors of buildings are reconstructed and in some cases even their surroundings as in the case of the Italian House of the Big Brother which is entirely shot indoors, although it appears to be a villa with a garden and a pool. 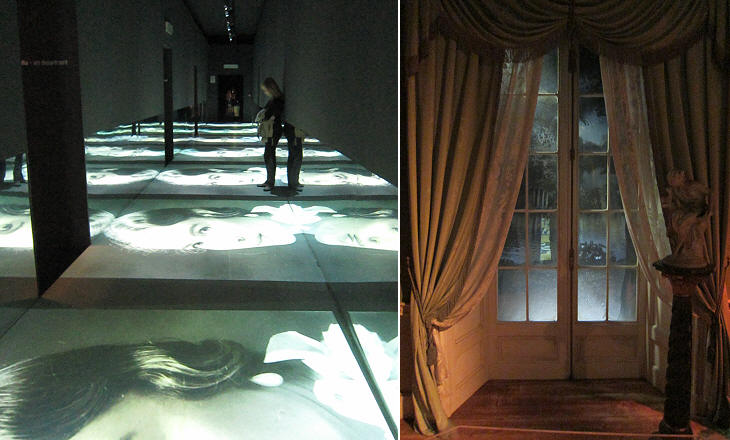 (left) The corridor of the main museum building; (right) a thunderstorm effect

The building which housed the management and administration of Cinecittà was recently turned into a small museum. The public can access this and another nearby building which display various mementos of the many movies shot at Cinecittà. The visit to the museum is complemented by a guided tour of the external sets. 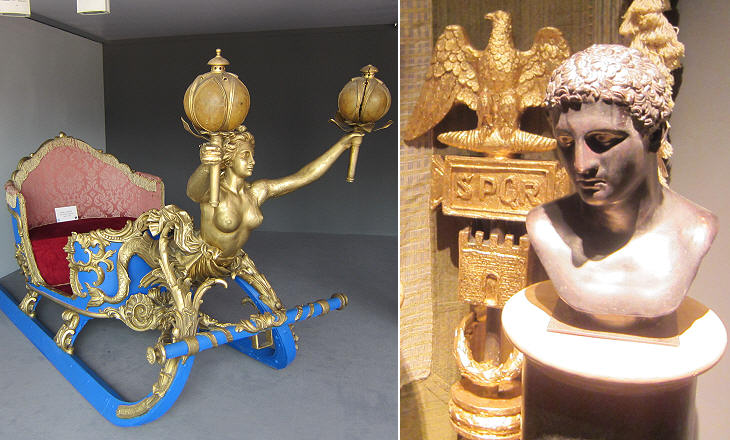 Some Italian Directors, such as Luchino Visconti and Franco Zeffirelli started their career or had large experience as opera directors and this explains why their movies had lavish costumes and sceneries. Federico Fellini is another Italian director who relied on the skills of Cinecittà designers to create complex and fantastic sceneries. 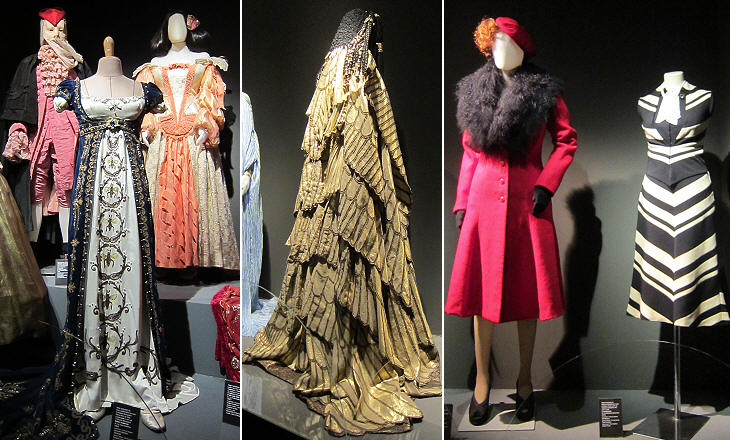 Cinecittà had its booming years in the 1950s and early 1960s. Cleopatra is one of the most expensive films ever made. It was shot in Rome after an initial shooting in London was stopped because English weather did not help star Elizabeth Taylor recovering from a tracheotomy. Quo Vadis and Ben-Hur are other "colossal" movies which were shot at Cinecittà. 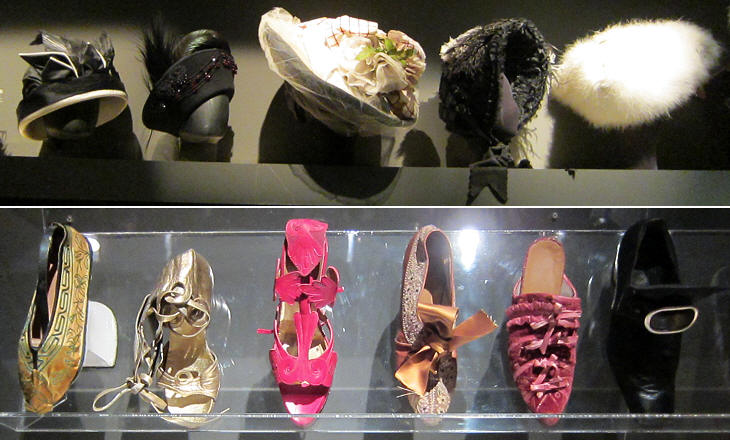 Italian talent in the design of costumes and sceneries is testified by the high number of Italians who have been nominated and eventually won the Academy Awards for Best Art Direction and Best Costume Design. 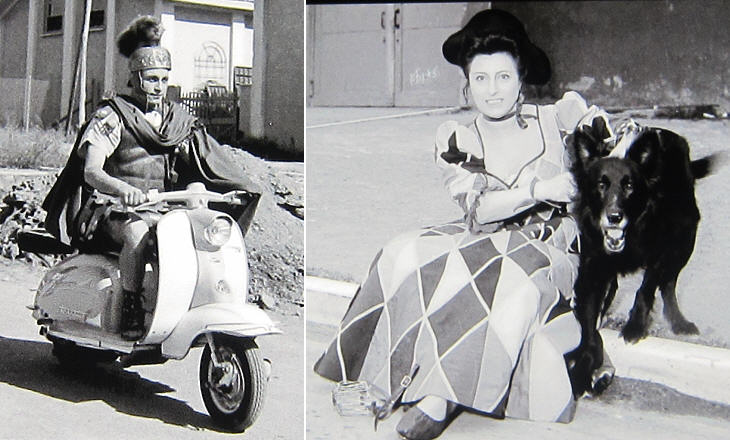 Off the set images: (left) a centurion riding a "Vespa"; (right) actress Anna Magnani and her dog during a pause of "La Carrosse D'Or" a movie by Jean Renoir

Occasionally some historical buildings of Rome are temporarily modified for the shooting of a movie, e.g. near Portico di Ottavia.
The image in the background of this page is based on a poster celebrating the inauguration of Cinecittà.

Other Days of Peace pages:
A Sunny Day in Villa Borghese
At the Flea Market
At the Beach
Voicing Your Views ..... and feeling better
Christmas in Rome
Eating Outdoors
Celebrating the Foundation of Rome
A visit to Roseto di Roma
The procession of La Madonna de Noantri
Running the Marathon
Watching the Parade
Finding Solace at the Protestant Cemetery
Attending 2007 July Events
Rome's Sleepless Night
Attending Winter Ceremonies
Jogging at Valle delle Camene
Sailing on the River to see the Bridges of Roma
An October Outing to Marino
A Special Spring Weekend
Embassy-hunting in Parioli
Attending a Funeral ...and enjoying it!
Celebrating Eritrean Michaelmas in Rome
Visiting Rome at Dawn
Visiting Rome in the Moonlight
Visiting Rome on a Hop-on-Hop-off Bus
Visiting Multi-ethnic Rome
Baroque Fireworks
Playing in the Snow at the Janiculum
Watching the Pride Parade
Reading Memoirs of Hadrian at Villa Adriana
Looking up at the Ceilings of the Vatican Palaces
Reading Seneca at the Baths
Spending the Last Roman Day at St. John Lateran's Cloister
Reading Ovid at St. Peter's
Walking the Dog at Valle della Caffarella
Keeping up with new discoveries at Museo Ninfeo