- How to Spend a Peaceful Day in Rome
Enjoying

Nowadays we can escape the rigours of a chilly winter by booking a last minute flight to a tropical holiday resort where the next day we are likely to catch a cold due to the excess of air conditioning. In the past, things were not so easy and travellers from northern Europe had to endure a long and tiring and sometimes dangerous journey to reach la Terra dei Limoni, Italy, the Land of Lemons. After passing the Alps and descending the River Adige valley to eventually reach Verona, J. W. Goethe wrote on September 11, 1786: Everything flourishes here in vigour and health, the sun is bright and hot, and one can believe again in a God. ... when, immediately after sunset, the loud shrill of crickets is heard, I feel at home in the world, neither a stranger nor an exile. I enjoy everything as if I had been born and bred here and had just returned from a whaling expedition to Greenland.
Italian Journey - translation by W. H. Auden and Elizabeth Mayer - Collins.
In Rome Goethe and many other travellers found a rest from the labours of visiting ruins and churches, by spending a sunny day strolling through the avenues of Villa Borghese. 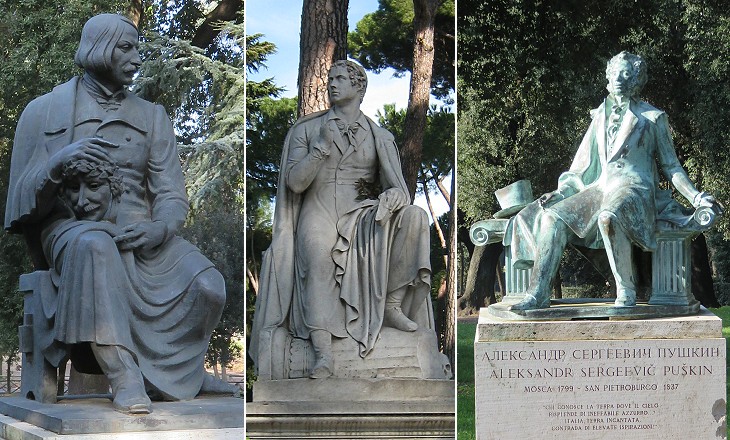 Looking for the monument to your preferred writer (1): (left to right) Gogol, Lord Byron and Puskin

In 1903 German Emperor William II commissioned a monument to commemorate the Roman sojourn of Goethe and this was placed in Villa Borghese; his example was followed by France with a monument to Victor Hugo (you can see them in the main page covering the Villa). Other governments followed and today by walking there you can meet many writers: Puskin, in particular seems to enjoy the Roman sunshine and rightly so, as he was used to the never-ending Russian winter nights. Unlike Gogol and Byron he never visited Italy, but he dreamt of it: Where Italys gold nights descend, Ill breathe free (Eugene Onegin - Book I - 49). The statue of Byron is a copy of that in Cambridge's Trinity College by Bertel Thorvaldsen. 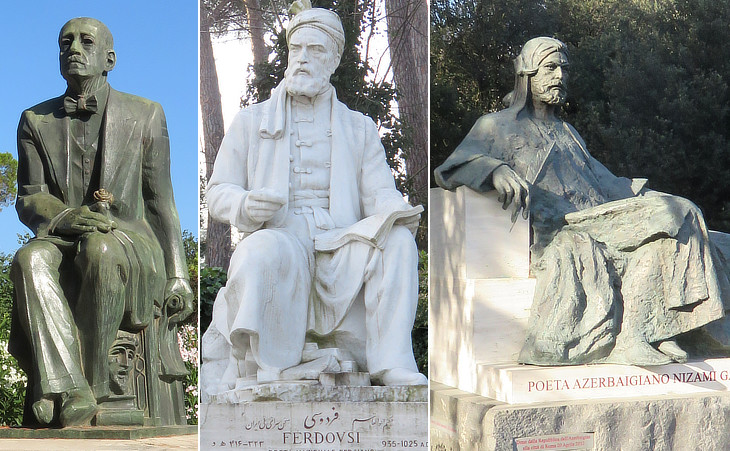 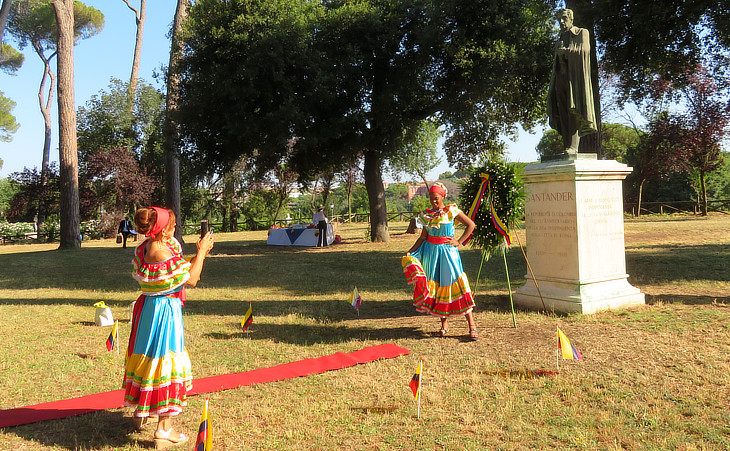 Francisco de Paula Santander (1792-1840) was a political and military leader during the independence war of the United Provinces of New Granada from Spain. In 1832 he was elected President of the Republic of New Granada, from which present day Colombia originates. In 1960 on the 150th anniversary of the declaration of independence a statue was erected to him at Villa Borghese. In 1934 an equestrian statue not far from this site celebrated Simon Bolivar, initially a friend/ally and later on an enemy/rival of Santander. 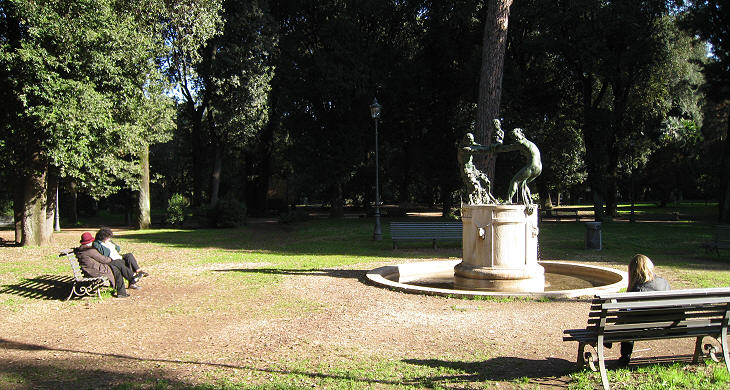 Enjoying the babble of Fonte Gaia, a modern fountain by Giuseppe Nicolini

It is not unusual to see tourists in Rome walking around with plastic bottles of water: this is nonsense because Rome is full of fountains, not only monumental ones, but also very practical cast iron fountains called by the Romans nasoni (big noses) because the water flows down from a curved tube. The fountains of Villa Borghese were designed not only to appeal to the eye, but also to the ear, as the babble of water was thought to have soothing effects on the soul of those who heard it. Fonte Gaia (Happy Fountain) is a 1928 addition to the many fountains one comes across in the villa. 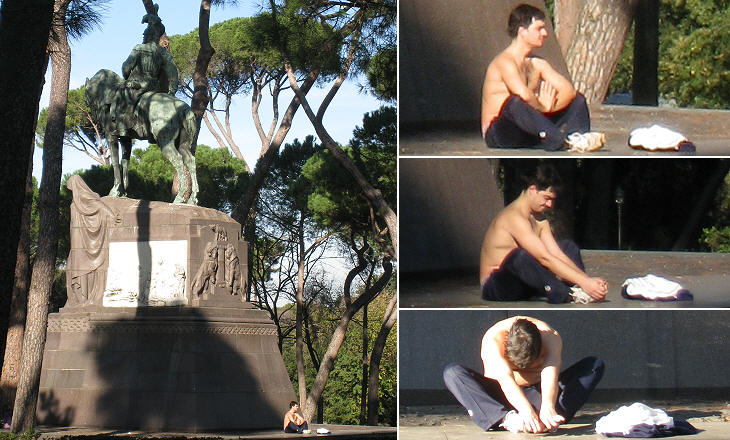 Cardinal Scipione Caffarelli Borghese, the first landlord of the Villa, passed away in 1633: he granted free access to the public to a vast section of his gardens and so did his heirs; Villa Borghese became known also as Villa del Popolo Romano. In 1901 this tradition helped the acquisition of the whole Villa by the Italian Government: it was renamed Villa Umberto I after the King of Italy who had been killed in 1900 by an anarchist, but the new name did not replace the old one and even the monument erected to the King in 1925 is almost hidden by the pines as if it did not want to intrude into the historical design of the park. 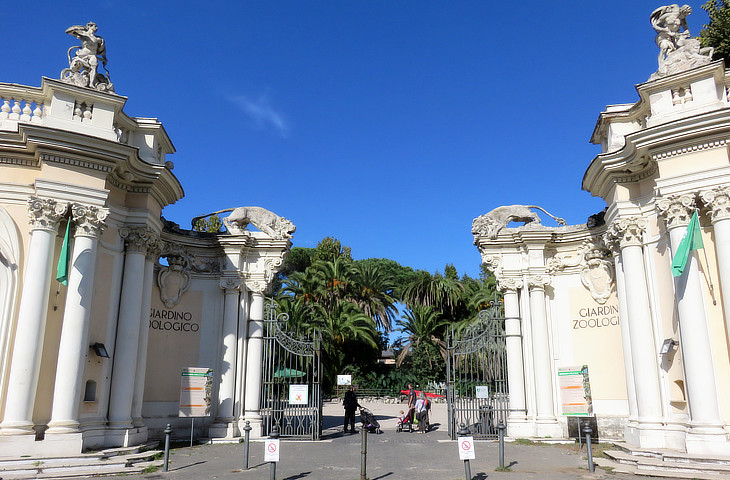 In 1911, for the 50th anniversary of the Kingdom of Italy, a zoological garden was inaugurated in an area between the historical part of the villa and Parioli, a new and very wealthy development to its north. In recent years facilities were greatly improved to increase the space available to the animals and replace cages with other barriers. 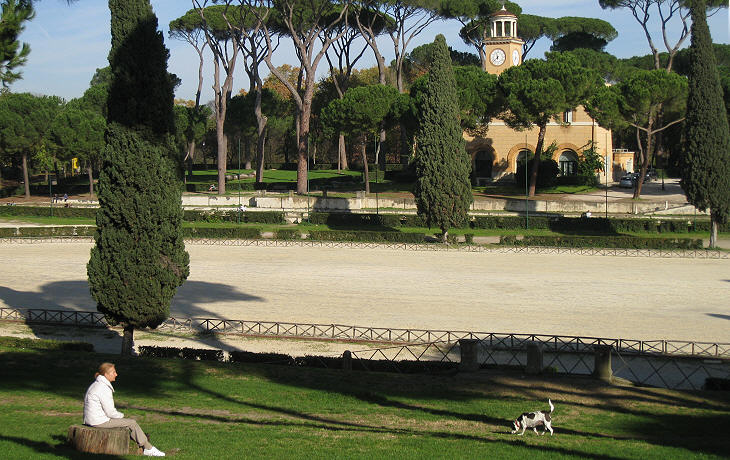 Playing with a dog at Piazza di Siena

Valletta dei cani (Dog valley) is a hidden part of Villa Borghese away from its main monuments where dogs can play without being kept on a leash, but occasionally toy dogs are allowed to freely explore more important locations under the vigilant eye of their masters. 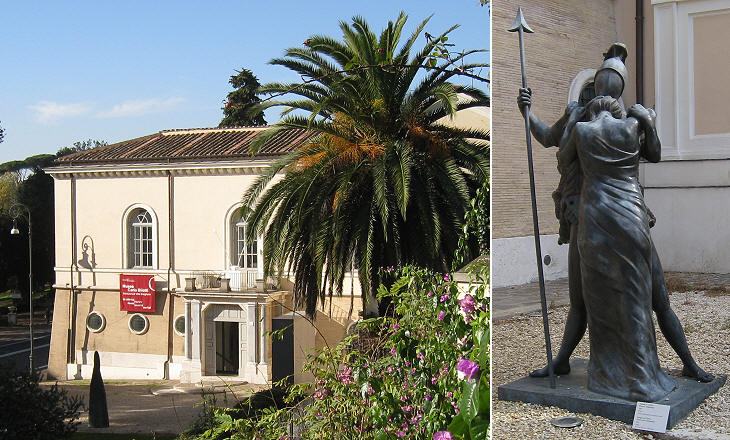 Villa Borghese is mainly known for Museo e Galleria Borghese, the museum in the Casino, but two other small museums are housed in ancillary buildings: a) Museo Pietro Canonica, which is dedicated to this Italian sculptor (1869-1959) who lived at la Fortezzuola, a building resembling a castle; b) Museo Carlo Bilotti, a collector of modern art who at his death in 2006 donated works by Giorgio De Chirico, Andy Warhol, Gino Severini, Giacomo Manzù and Larry Rivers. The collection is housed in l'Aranciera (the Orangery), a XIXth century building which replaced the casino of a property bought by the Borghese to enlarge their villa and which was destroyed in 1849 during the Defence of the Roman Republic. 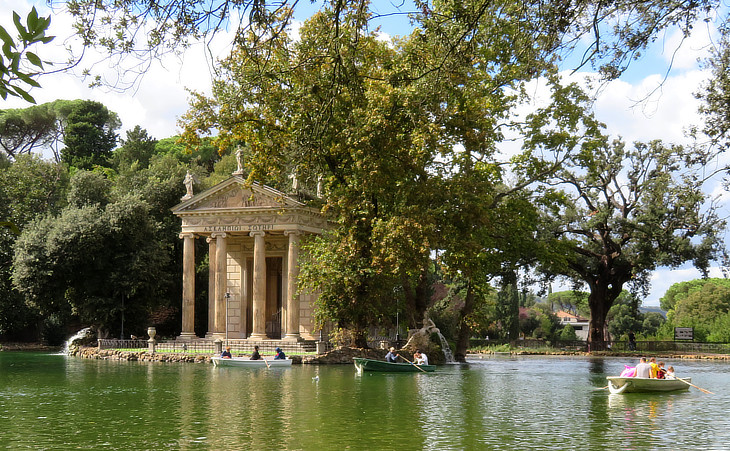 Rowing in the pond of Tempio di Esculapio

Between 1766 and 1793 Prince Marcantonio IV Borghese brought about a large restyling of the gardens to the south of the Casino introducing elements of English gardening. In particular the pond where one can go rowing is borrowed from English models.

In 1908 Villa Borghese was linked to the Pincio Gardens by a bridge and a long avenue flanked by magnolias. Because the Pincio was decorated with busts of famous Italians some busts were added in the new avenue to smooth the transition between the two gardens. The busts constitute a nightmare for the maintenance of the park as their noses are a prime target of vandals. 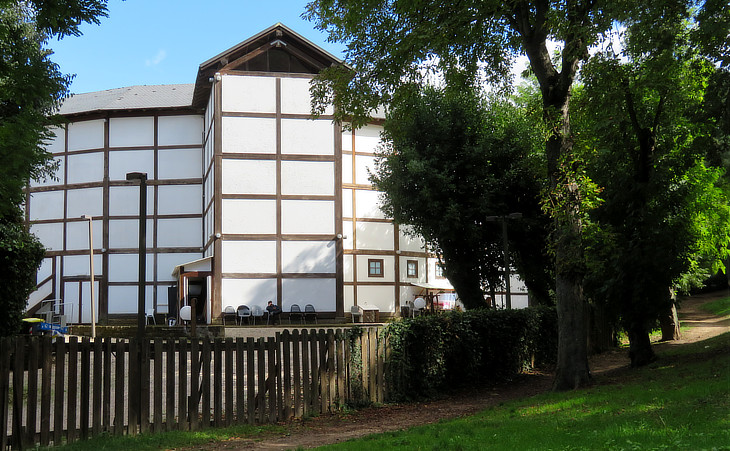 Going to the Globe Theatre of Villa Borghese

A recent addition to Villa Borghese is a replica of Shakespeare's Globe Theatre. Taking a ride on a playground train

Visitors with children may choose to use a playground train which calls at the main sites of the villa, including a Zoological Garden which was inaugurated in 1911. Alternatively tricycles can be rented near the entrance from Porta Pinciana. 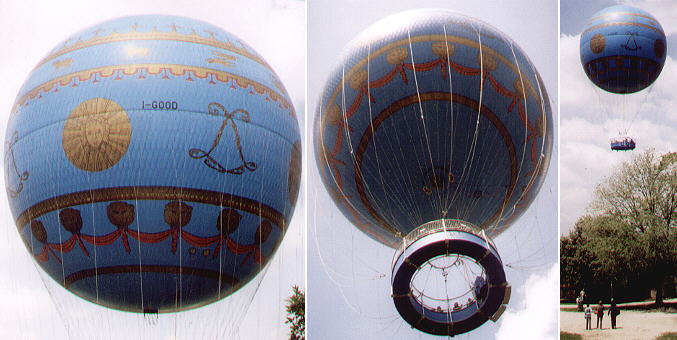 Seeing Rome from a balloon

A short-lived addition to the facilities of the Villa was a balloon, showing the decoration of the first balloons used by the Montgolfier brothers in 1783. A safety cable ensured the balloon did not move from its mooring site. This facility was discontinued in 2009.

The casinos of Villa Borghese (left) and Villa Medici (right)

The balloon allowed interesting views over the casinos of Villa Borghese and Villa Medici, which seen at the same time reveal even more their similarities.

The view from the balloon allowed also the discovery of monuments which are usually hidden by high walls, such as the gardens of Palazzo del Quirinale or the surviving Casino del Monte of lost Villa Ludovisi. 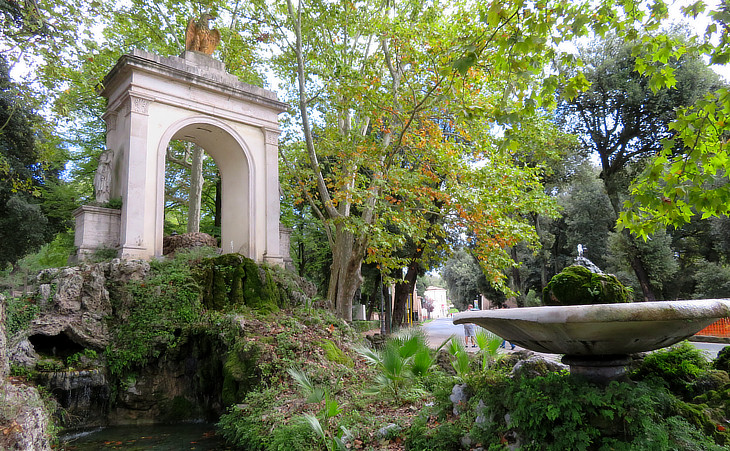 The image used as background for this page shows a dragon near Giardino dei Melangoli (see main page); dragons and eagles were the heraldic symbols of the Borghese family.

Other Days of Peace pages:
At the Flea Market
At the Beach
Voicing Your Views ..... and feeling better
Christmas in Rome
Eating Outdoors
Celebrating the Foundation of Rome
A visit to Roseto di Roma
Finding Solace at the Protestant Cemetery
Running the Marathon
Watching the Parade
The procession of La Madonna de Noantri
Attending Winter Ceremonies
Rome's Sleepless Night
Attending 2007 July Events
Jogging at Valle delle Camene
Sailing on the River to see the Bridges of Roma
An October Outing to Marino
A Special Spring Weekend
Embassy-hunting in Parioli
Attending a Funeral ...and enjoying it!
Celebrating Eritrean Michaelmas in Rome
Visiting Rome at Dawn
Visiting Rome in the Moonlight
Visiting Rome on a Hop-on-Hop-off Bus
Visiting Multi-ethnic Rome
Baroque Fireworks
Playing in the Snow at the Janiculum
Watching the Pride Parade
Reading Memoirs of Hadrian at Villa Adriana
Visiting the Movie Sets at Cinecittà
Looking up at the Ceilings of the Vatican Palaces
Spending the Last Roman Day at St. John Lateran's Cloister
Reading Seneca at the Baths
Reading Ovid at St. Peter's
Walking the Dog at Valle della Caffarella