If you came to this page directly, you might wish to read a page with an introduction to this section or page one, a description of the town first.
(In the XVth century) one of the noble families of the city, having become more powerful, richer, and influential than any other in the town, gradually made themselves lords of the little commonwealth. These were the Vitelli; and all that the city still retains, that is remarkable, consists of traces and memorials of their wealth and greatness.
Thomas Adolphus Trollope (brother of novelist Anthony Trollope) - A Lenten Journey in Umbria and the Marches - 1862 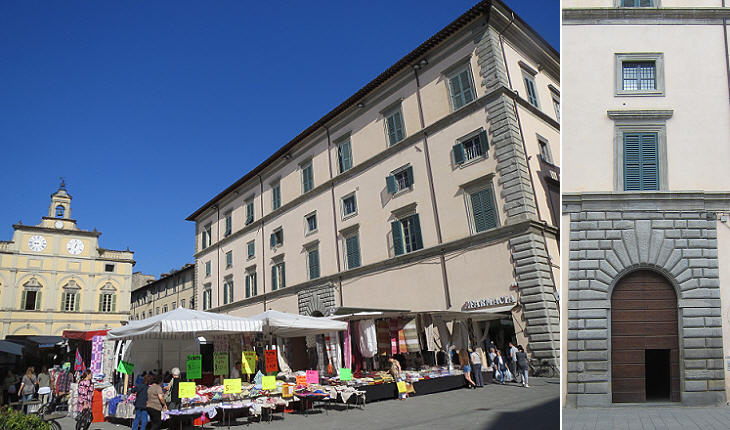 Palazzo (Vitelli) in Piazza and its portal

Some Vitelli were condottieri (mercenary warlords), others were cardinals, but the founders of the wealth of the family were merchants. In 1381 Gerozzo Vitelli was appointed Abbondanziere of Città di Castello, i.e. he was in charge of ensuring vital supplies to the town. The palace which his successors built in the main square was known as Palazzo dell'Abbondanza because of its large warehouse. This part of the building is behind the front on the piazza which was built in 1545.
In the XVth century the Vitelli acquired a political role in the government of Città di Castello; they were favoured by some popes (e.g. Eugenius IV) and had to deal with the hostility of others (e.g. Sixtus IV and Alexander VI). 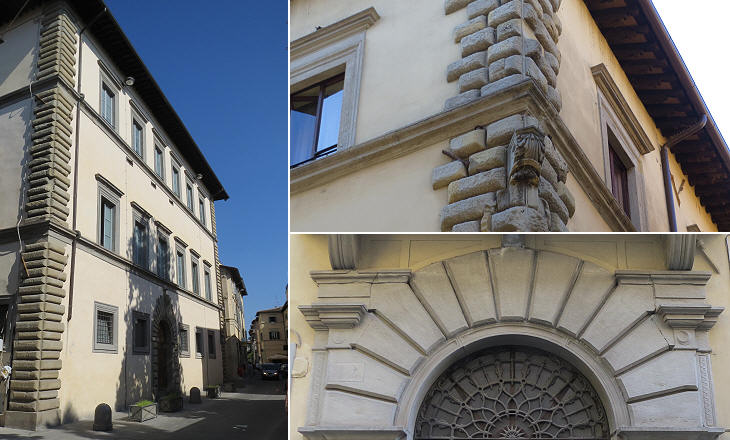 The status of the Vitelli improved in 1522 when Vitello Vitelli married Angela de Rossi. Her father belonged to a noble family from Parma with links to the German emperors and her mother Bianca Riario was a relative of the family of Pope Sixtus IV, of the Medici of Florence and of the Sforza of Milan. It is uncertain when exactly she moved to Palazzo a S. Giacomo (one of the quarters of the town), whether when she was still the wife of Vitello or after his death in 1528 and her marriage to Alessandro, her husband's cousin in 1530. She ensured the continuity of the dynasty by bearing thirteen Vitelli children. 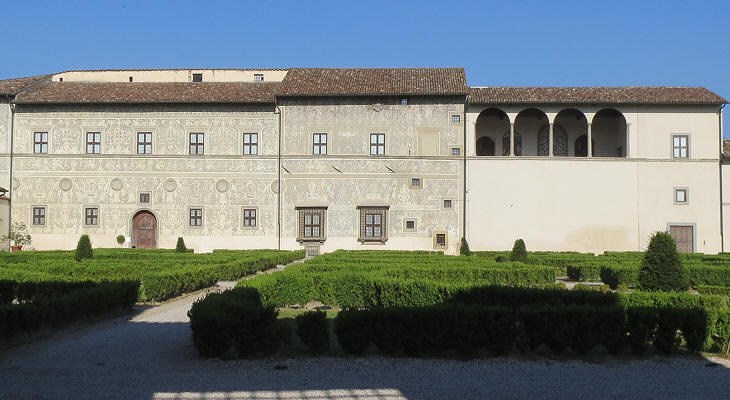 A series of apparently aimless turnings round sharp corners, among buildings that looked as if they had been "in Chancery" for the last half century, brought us at last to our inn, the inn "La Cannoniera!" and all the misgivings which the appearance of the city was calculated to suggest as to the character of the accommodation it was likely to afford, were dispelled. The "Cannoniera" is as good an inn as a tired traveller need wish to meet with. Trollope
Alessandro Vitelli spent almost all his life on the battlefield. He fought for Emperor Charles V, for the Medici and eventually for Pope Paul III. He then entered the service of Charles V again and fought in Hungary and Germany. For his rare days at Città di Castello he commissioned a palace which is called after a cannon foundry it housed. 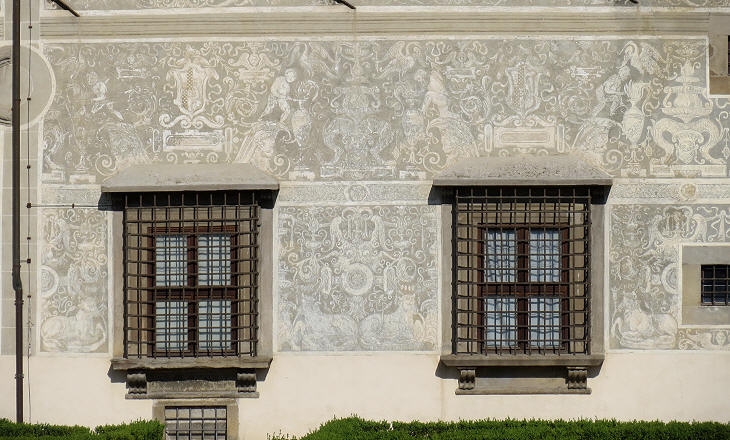 Graffito is a painting technique which was very popular in the XVIth century to decorate façades of palaces (it was rarely used for churches). Palazzo alla Cannoniera retains the whole graffiti decoration of the rear façade which was painted by Cristoforo Gherardi based on a plan designed by Giorgio Vasari. The two artists were involved also in the decoration of Oratorio del Gesù at Cortona. Today the palace houses the Civic Museum. 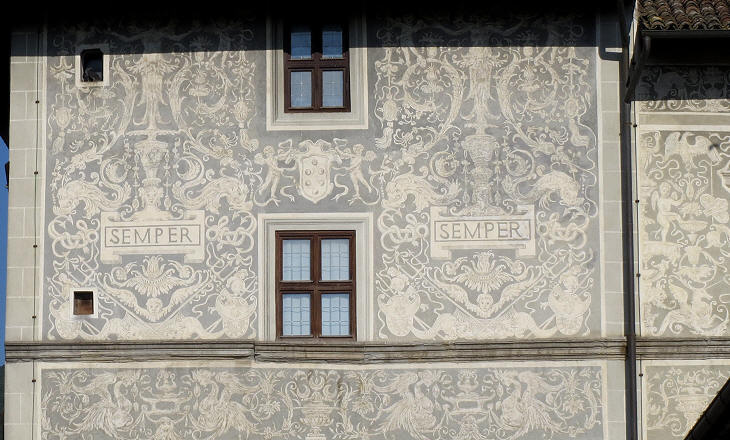 When the decoration was being made Alessandro Vitelli was under the service of the Medici and his palace was decorated with their coat of arms and the motto "semper" (always) which alludes to the perpetuity of the Medici dynasty. The vases holding three crescents in the lower part of the image were probably added after Alessandro Vitelli fought against the Ottomans in Hungary (you can see them better in the image used as background for this page).
Rome still has several palaces decorated with graffiti, but they are smaller than Palazzo alla Cannoniera (you may wish to see Palazzo Ricci or Palazzo Istoriato). 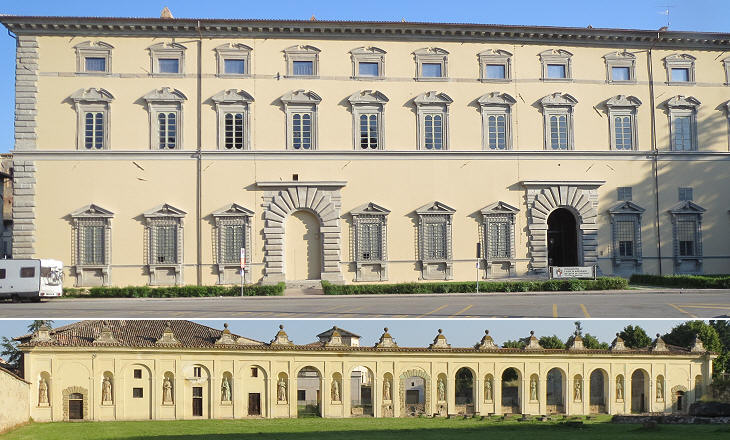 Palazzo a S. Egidio: (above) façade of the main building; (below) gardens

Paolo II Vitelli, nephew of Alessandro, spent his military career under the service of the Farnese Dukes of Parma. He mainly fought in Italy, but in 1571 he took part in the Battle of Lepanto. According to tradition he designed himself the grand palace he built at S. Egidio, another quarter of Città di Castello. The façade of the building has an unusual ratio between width and height. The palace included a large garden which ended with a second smaller building. 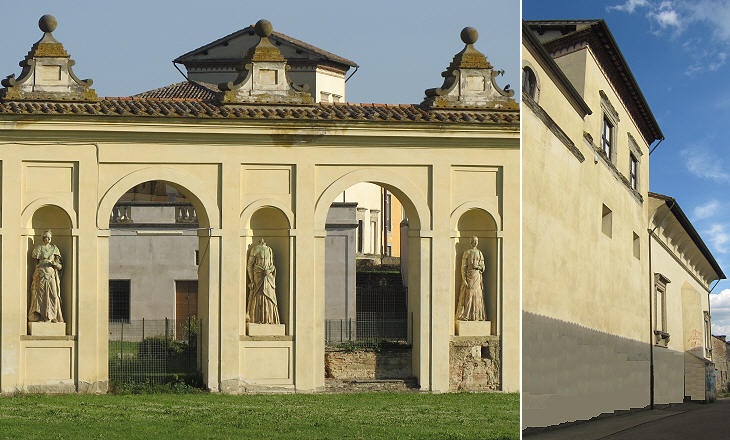 Palazzo a S. Egidio: (left) portico which separated the monumental part of the gardens from that which was farmed; "villino" (small building) at the end of the gardens

The gardens attached to this princely residence were very famous in their day, having been laid out, in that regular and stately fashion, which was in vogue. (..) They were full of all those waterwork contrivances, which were so much admired by the sixteenth century gardeners; and had been abundantly supplied with water brought at an enormous cost from the hills bounding the wide valley of the Tiber to the eastward. They were long celebrated also for their noble plane-trees, said to have been many centuries old. But the water conduits have been broken, and the trees cut down. Trollope
The complex is now owned by a local bank and the facilities of the gardens are being repaired. 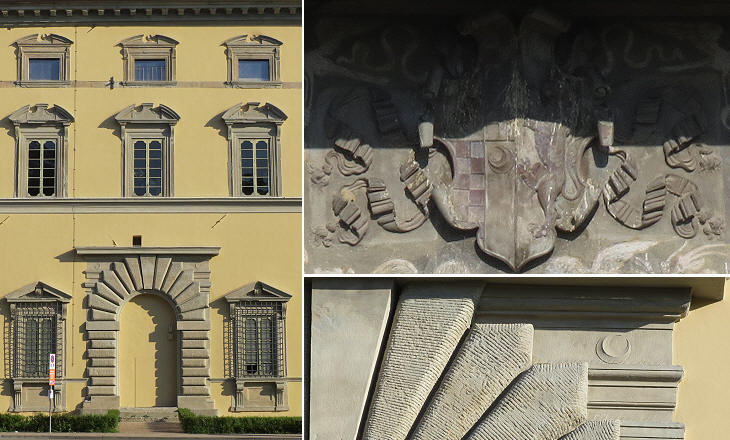 In the second half of the XVIth century warlords had not many opportunities to show their talents and the Vitelli turned to ecclesiastical careers and lost interest in Città di Castello and the family palaces. Vitellozzo Vitelli, son of Alessandro was appointed cardinal at the age of 26. The Vitelli acquired a property in Rome which in 1600 they sold to Pope Clement VIII and which is known as Villa Aldobrandini. Other ecclesiastical members of the family contributed to the embellishment of S. Marcello al Corso.