If you came to this page directly, you might wish to read a page with an introduction to this section first.
Oppidum est praediis nostris vicinum - nomen Tiferni Tiberini -, quod me paene adhuc puerum patronum cooptavit, tanto maiore studio quanto minore iudicio. Adventus meos celebrat, profectionibus angitur, honoribus gaudet. In hoc ego, ut referrem gratiam - nam vinci in amore turpissimum est -, templum pecunia mea exstruxi, cuius dedicationem, cum sit paratum, differre longius irreligiosum est.
There is a village near my property called Tifernum Tiberinum, which selected me as its patron when I was still almost a boy, and showed, by so doing, more affection than judgment. The people there flock to meet me when I approach, are distressed when I leave them, and rejoice at my preferment (promotion). In this village, as a return for their kindness - for it would never do to be outdone in affection - I have, at my own expense, built a temple, and now that it is completed it would be hardly respectful to the gods to put off its dedication any longer.
Pliny the Younger - Epistles 4.1 - Translation by John B. Firth. 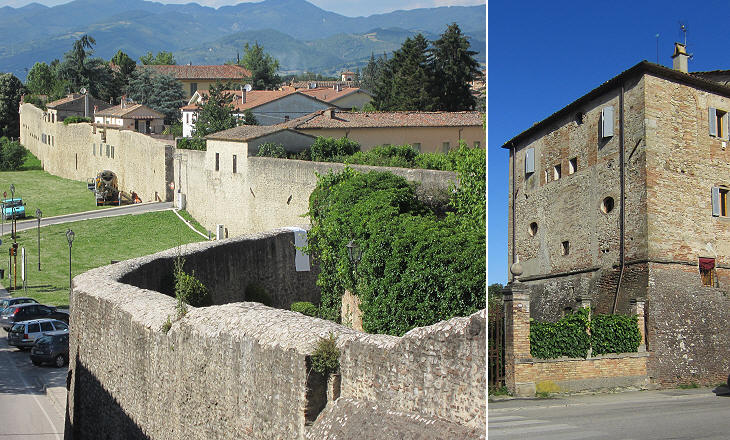 According to tradition Tifernum, a small Roman town near the River Tiber, was razed to the ground by Totila, King of the Ostrogoths, during the war with the Byzantines in the VIth century and it was subsequently rebuilt by Florido, a pious man who became the bishop of the new town and eventually its patron saint.
Old medieval chronicles refer to the town as Castrum Felicitatis (Castle of Happiness) and from the XIIIth century as Civitatis Castelli (City of the Castle). By that time the settlement was surrounded by walls which were strengthened in the XVIth century by the addition of small bastions. 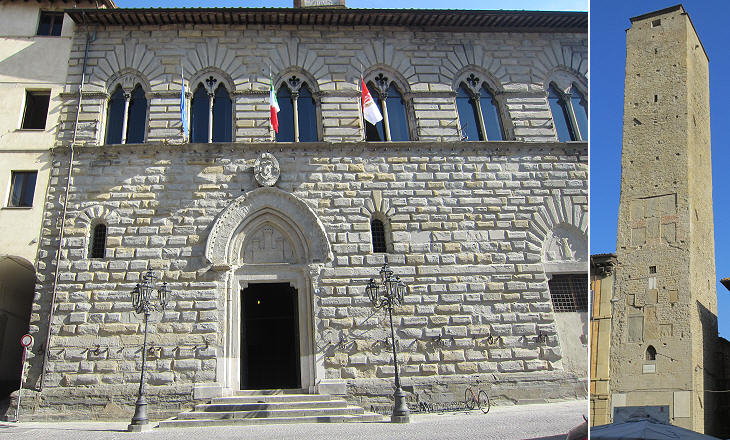 Città di Castello is situated very near the border with Tuscany and its Town Hall, built in 1322-1338 by Angelo da Orvieto (who was involved also in the design of Palazzo dei Consoli at Gubbio) recalls Florentine buildings for the use of bugnato, large stones projecting from the walls.
The image used as background for this page shows a relief depicting the symbol of the town in the portal of the building.
A very tall medieval tower stands opposite the Town Hall; it adjoined the Bishop's Palace which was entirely rebuilt in the XIXth century. (left) Palazzo Comunale: interior; (right) Torre Civica: detail showing that coats of arms of bishops, popes and town magistrates were placed on it

Città di Castello was a Comune, an independent city-state with its own magistrates, but it was very much in the political sphere of influence of Perugia and in 1151 it took part in an alliance promoted by Perugia to destroy Gubbio. The venture ended in disaster and glass windows at S. Ubaldo in Gubbio depict the event and in particular the fallen soldiers of Città di Castello.
Similar to many other Umbrian towns Città di Castello had to accept a reduction of its municipal rights when Cardinal Gil de Albornoz restored papal authority in the region in 1353-1367. 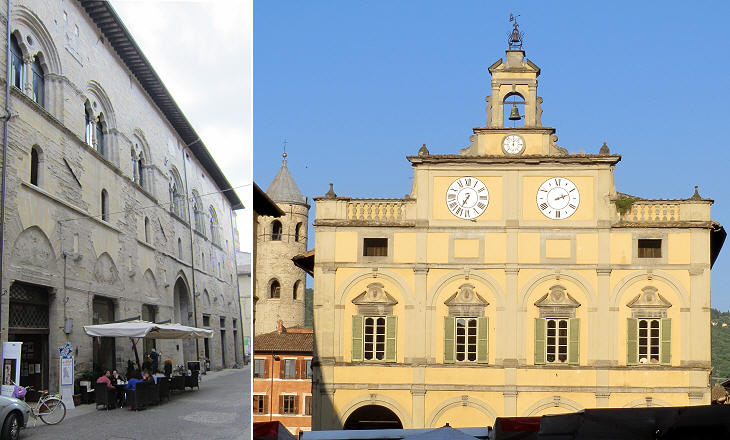 Palazzo del Podestà: (left) XIVth century side; (right) 1686 new façade with two clocks: that on the right was set according to the Italian hour

Quarrels among the inhabitants of the Comune were quite common and eventually led to calling in a foreigner to rule the town for a limited period of time, usually six months or one year. This officer was called podestà from Latin potestas (authority).
Palazzo del Podestà was designed by Angelo da Orvieto, but its façade on the main square of the town was redesigned in 1686.
Cante Gabrielli from Gubbio is recorded as having been podestà at Pistoia, Siena, Florence (where he sentenced Dante to exile), Orvieto and other minor towns. He was not the only one who turned being podestà into a highly paid profession. The Cathedral was built in the XIth century, but it was largely modified in the XIVth century and again between 1466 and 1529. The cylindrical medieval bell tower on the rear of the building recalls a pattern of bell towers which were first designed at Ravenna.
The Renaissance renovation of the Cathedral was promoted by the Vitelli, a family of warlords who were the de facto rulers of Città di Castello between the second half of the XVth century and that of the following century. The many palaces built by the Vitelli at Città di Castello are covered in page two. The unfinished façade of the Cathedral was designed in 1632. 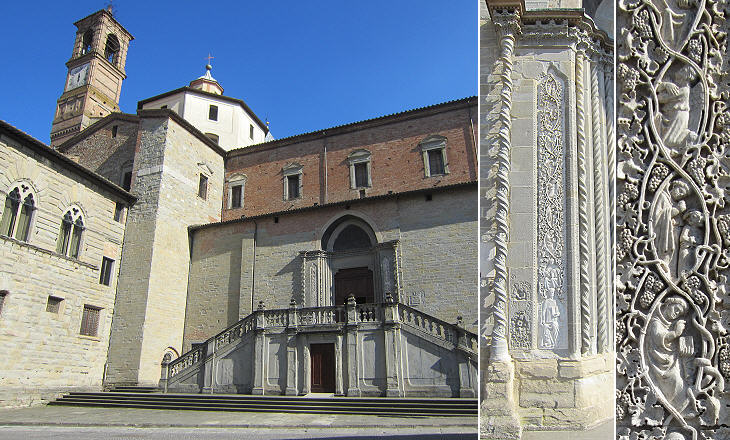 The Cathedral (which adjoins the Town Hall) is a combination of different styles (Gothic, Renaissance and Baroque) and yet the overall result is pleasing to the eye. Even the Gothic portal is a combination of styles, because the relief portraying saints framed by a grapevine was designed keeping in mind some ancient reliefs with acanthus scrolls surrounding animals, e.g. at S. Saba in Rome. 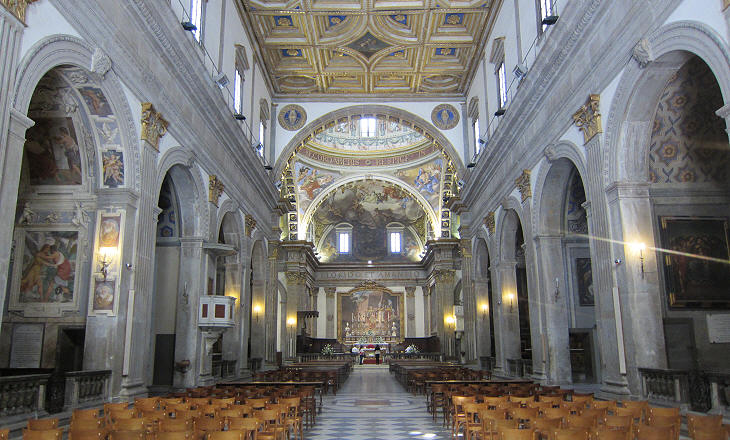 The influence of Tuscan art on Città di Castello was not limited to the Town Hall. The interior of the Cathedral was redesigned following patterns established in Florence in the XVth century by Leon Battista Alberti and Filippo Brunelleschi which were based on the study of ancient monuments. 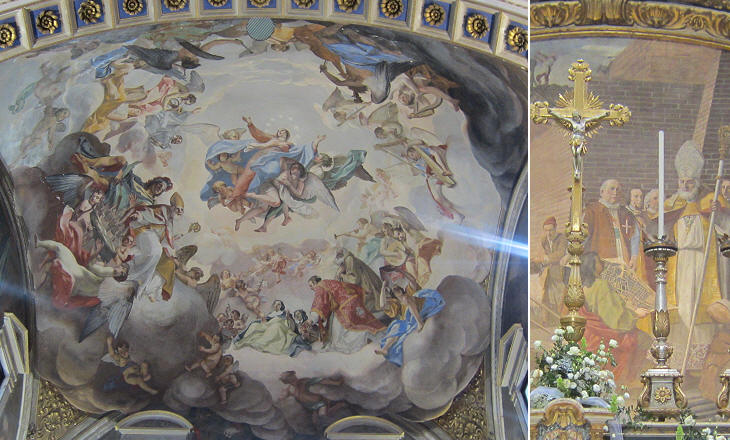 Cathedral: (left) ceiling of the dome by Tommaso Conca; (right) detail of a fresco in the apse showing St. Florido endorsing the design of the new town by Marco Benefial

The influence of Rome is evident in some XVIIIth century frescoes. In 1789 an earthquake caused the collapse of the dome and in 1795 Tommaso Conca was commissioned a fresco which follows the pattern of many illusionistic ceilings of Roman churches. Tommaso was a nephew of Sebastiano Conca, a very influential painter in the first half of the XVIIIth century. He was twice Principe dell'Accademia di S. Luca, a sort of chairman of the guild of the artists.
Marco Benefial was a Roman painter who harshly criticized Sebastiano Conca and for this reason was unable to receive many commissions in Rome and was forced to accept those of provincial towns, such as Città di Castello where he worked in the 1740s. 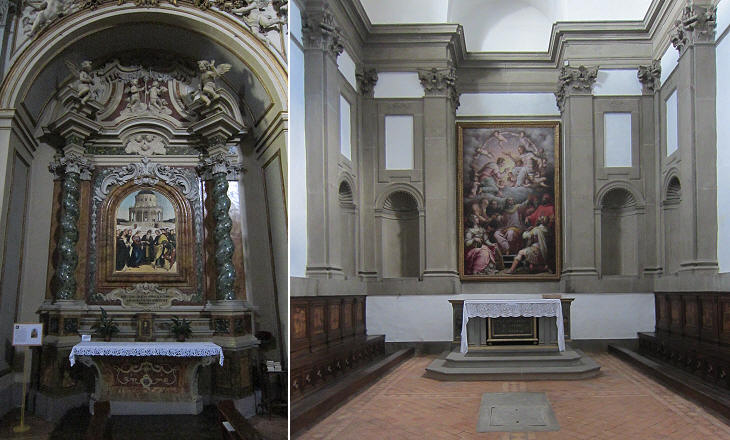 S. Francesco: (left) altar which housed the original of The Marriage of the Virgin by Raphael; (right) Cappella Vitelli

Similar to all Umbrian towns Città di Castello has a large church dedicated to St. Francis of Assisi. It housed one of the most celebrated paintings by Raphael, which in 1798 a French general "asked" to receive in compensation for having brought liberty (at the point of the bayonet) to the town. The painting eventually ended up in Milan at the Pinacoteca di Brera.
The chapel designed by Giorgio Vasari for the Vitelli is another example of Tuscan influence in Città di Castello. Vasari was born at Arezzo and he mainly worked for the Medici of Florence. The Vitelli were warlords and they often fought for that same family. 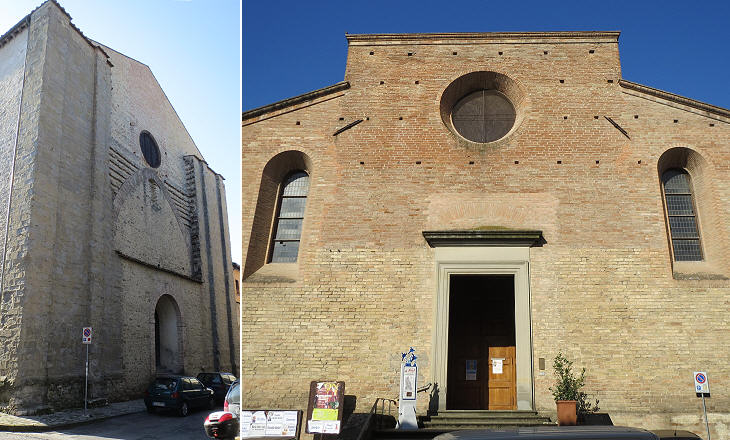 The Dominican Order was approved by Pope Honorius III in 1216 almost at the same period as the Franciscan Order was endorsed. The two orders are called mendicant because of the vow of poverty taken by their members. They immediately attracted many followers and Città di Castello had monasteries of both orders.
Unfinished façades are a feature of many churches of Florence, an aspect usually absent in Rome; in this respect Città di Castello is closer to Florence than to Rome. 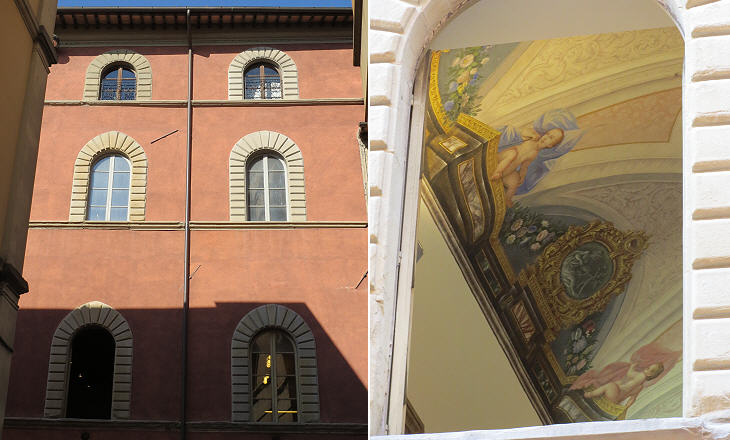 Florence and especially Lucca issued laws which limited the display of wealth. They were aimed at clothing, but in a way they influenced architecture too in the design of private palaces. Those of Florence, even the most imposing ones, have a rather severe appearance. At Città di Castello, as well as at Florence, the external modesty of the building concealed the luxury of its interior. You may wish to see a comparison between monuments of Rome and Florence. 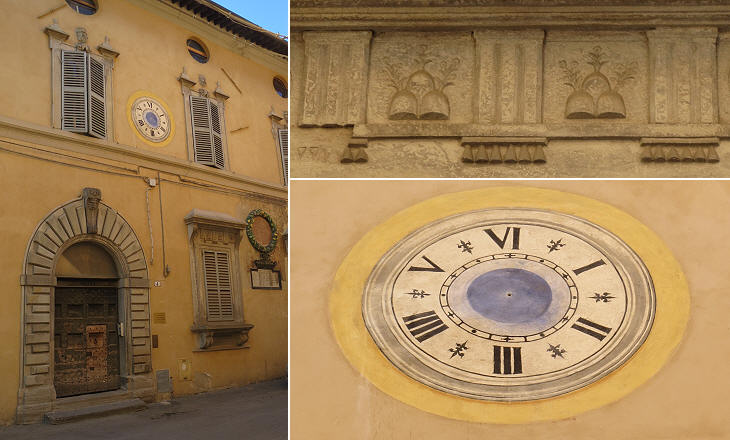 The first Mount of Piety was founded in Perugia in 1462. The palace which housed the Mount of Piety of Città di Castello was built in the XVIIIth century, but the institution was promoted by the Franciscans in the XVIth century and its foundation was endorsed by Pope Pius IV. 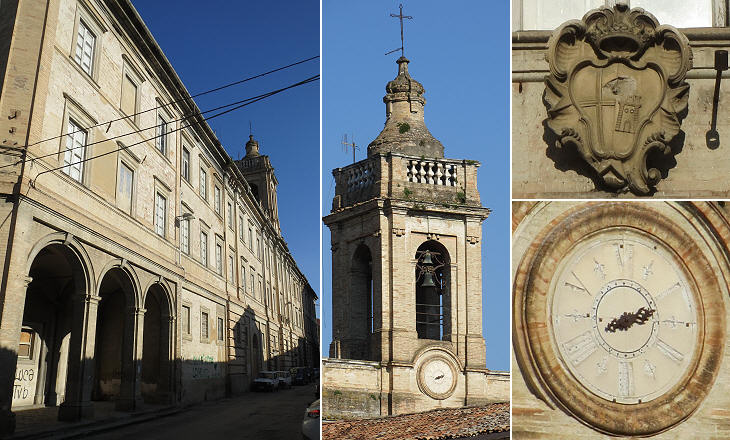 The "welfare system" of the Papal State relied on institutions caring for the poor, the sick, the "girls in danger", the orphans and the abandoned children. Monsignor Luigi Gazzoli, governor of Città di Castello (and cardinal in 1803) promoted the unification of some of these institutions inside a modernised building which was completed in 1785. 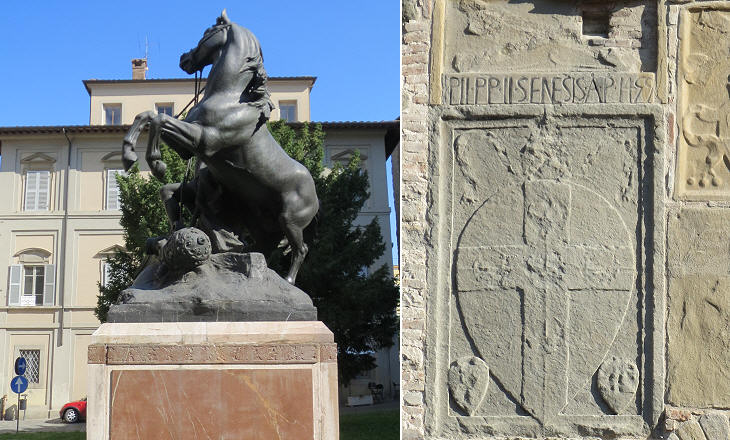 The most striking thing about Tuscany is that all the public works, the roads and the bridges, look beautiful and imposing (..) a refreshing contrast to the Papal States, which seem to keep alive only because the earth refuses to swallow them.
J. W. Goethe - Italian Journey - 1786 - Translation by W. H. Auden and Elizabeth Mayer - Collins.
There is not a town in Italy without a monument to Giuseppe Garibaldi or another contributor to Italian Unity in 1860-1870, but it is very unusual to see a monument celebrating the end of one of the previous states, yet at Città di Castello they erected one which portrays a horse stamping on the papal crown. The citizens of the town, because of their proximity to Tuscany, perceived the miserable condition into which the theocratic government kept them, more than other inhabitants of the Papal State. This explains why the monuments of Città di Castello do not bear any papal symbols, exception made for a worn out coat of arms of Pope Pius II.

Go to page two and see the Vitelli Palaces.