- Dec. Max. from the Forum to Cardo degli Aurighi 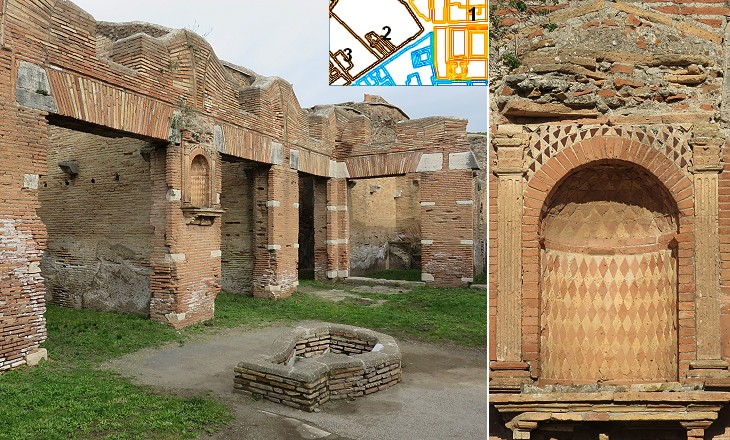 (left) Courtyard of Caseggiato del Larario with a small basin having a keyhole shape; (right) brickwork niche; (inset) plan of the monuments covered in this page (all on the northern side of Decumanus Maximus): 1) Caseggiato del Larario; 2) Christian Basilica; 3) Horrea on Cardo degli Aurighi

The Forum of Ostia did not have shops, but because many people gathered there, these were opened in its proximity. Caseggiato del Larario was situated immediately west of the Forum and its ground floor was occupied by shops, which were arranged around an inner courtyard. An elegantly designed niche, very similar to those found at Horrea Epagathiana, might have contained a statue of a Lar, a Roman deity protecting households. 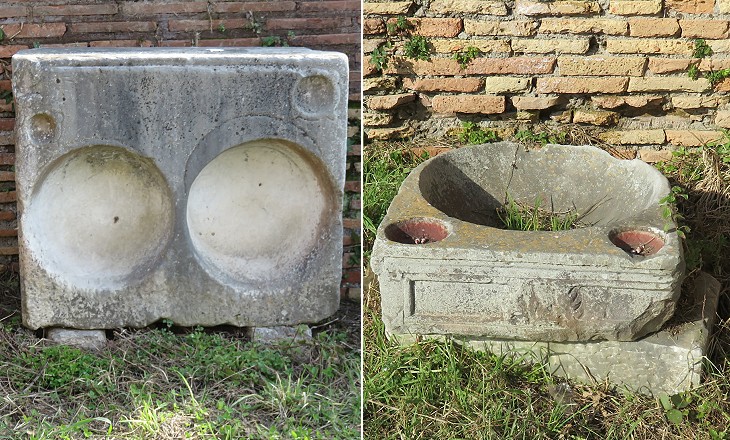 "Mensae ponderariae" (tables with standard measures). Two fragments of entire sets were found near the junction between Decumanus Maximus and Via della Foce

In many Roman towns the Forum housed an "Office of Weights and Measures" where the accuracy of weighing/measuring equipment could be checked against standard measures certified by local authorities. The mensae ponderariae (Lat. pondus means weight) found at Ostia were most likely placed in the Forum Basilica. Usually they had inscriptions with the names of the officials who certified them (see the entire sets at Pompeii and at Dion in Greece). 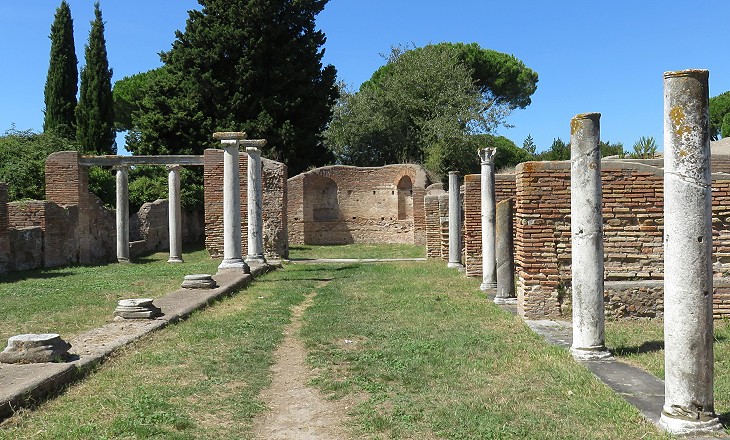 In 1939 archaeologists unearthed two adjoining buildings having an unusual layout which was immediately associated with a Christian use of them. Long naves leading to apses were interpreted as evidence of early churches. The apses have niches, presumably for statues, which indicate they were initially built to house a nymphaeum or a triclinium, a dining room. Evidence of the Christian use of the buildings, or at least of one of the apses was found in an inscription. It was written on a lintel which was discovered in an adjoining building, but which perfectly fitted the space at the entrance to the southern apse. The first line of the inscription makes reference to Pishon, Gihon, Tigris and Euphrates, the four rivers which flowed out of the Garden of Eden (these were often depicted in Christian mosaics, e.g. in Rome and Tunisia). The interpretation of the second line is still unclear.
A statue of Fortuna was found in one of the apses, but it is believed to have been part of the decoration of an adjoining bath establishment. 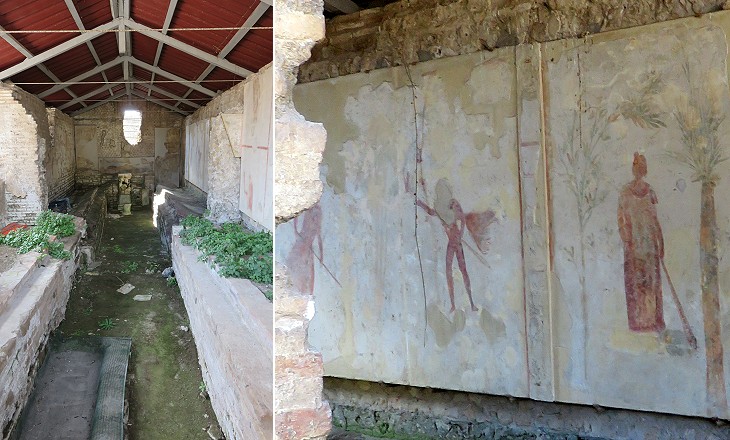 Another section of the baths (or of a small house adjoining them) was adapted for religious use in the late IInd century AD. It is one of the many mithraea archaeologists have found at Ostia. The cult of Mithra was a religion for initiates; the reliefs and paintings found at almost all mithraea are the main source of information on key aspects of this belief. Heliodromus, the Sun-Runner, was the second most important grade of initiation. He was portrayed with a burning torch. Cautes and Cautopates were two torch-bearers symbolizing the rising and the falling sun and the constellation of Gemini. Many of the subjects depicted in a mithraeum could be interpreted as symbols of constellations. 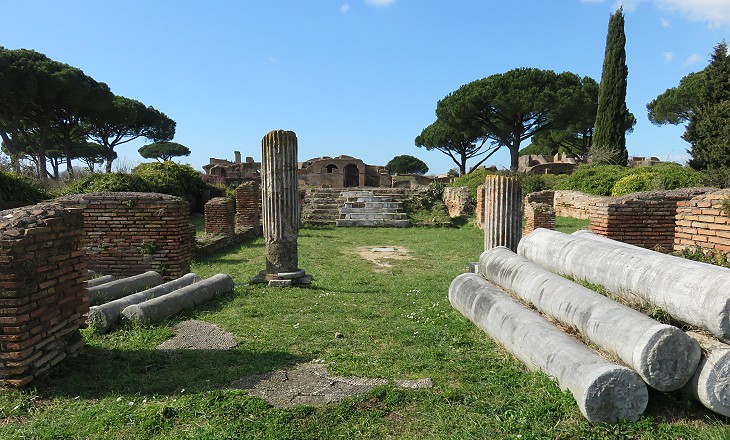 The fabri navales were ship builders/carpenters and their guild must have had many wealthy members because it erected a large temple which could be accessed from the Decumanus Maximus. The complex is dated late IInd century AD. The temple is preceded and followed by two courtyards, but there is not much evidence of the ancillary buildings one would expect to find in the seat of a guild. The other puzzling aspect is that it is not clear whether it was dedicated to a major god. In the late IVth century it was used as a depot for granite columns. 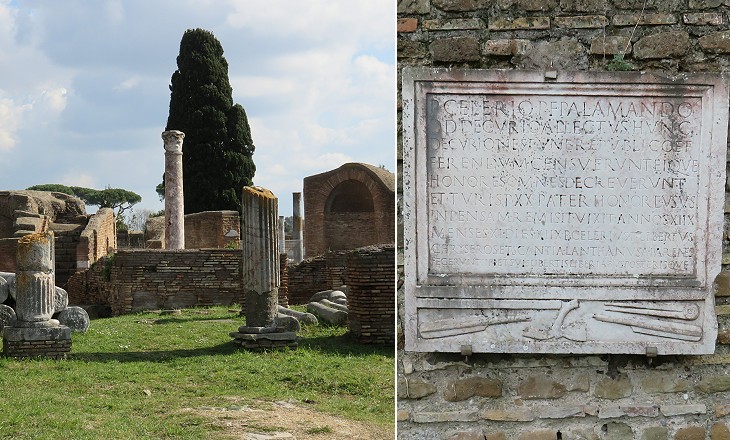 (left) Tempio dei Fabri Navales and Schola del Traiano (another guild seat) opposite it on the other side of Decumanus Maximus; (right) gravestone of P. Celerius Amando

A gravestone found in the early XIXth century was decorated with some of the tools used by the fabri navales and its long inscription showed the degree of social mobility which existed at Ostia. P. Celerius Amando died at the age of 18 and we must assume he had just been admitted into the guild. His parents (who paid for the gravestone) were liberti, former slaves, but P. Celerius Amando had a higher legal status (ingenuus i.e. born free) and a public funeral ceremony was held at his death. In summary a couple of former slaves managed to achieve enough wealth/influence to have their young son accepted into a guild and the decuriones (senators) of Ostia to decree public funerals at his death. 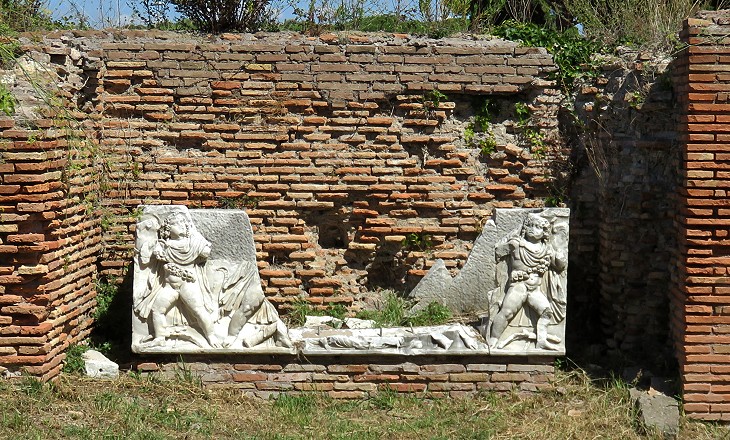 In 1612 the completion of Acqua Paola marked the end of a long effort made by the Popes to grant Rome a large supply of water. The wealthiest families managed to obtain a private supply of water for their palaces. Ancient sarcophagi were very often used as basins for small fountains. This somewhat sacrilege use of sarcophagi began very early in history. Archaeologists found at Ostia a house where a pagan sarcophagus had been turned into the basin of a private fountain. The house was built in the IVth century by using the walls of some shops along Decumanus Maximus, an indication of the economic decline of the town. 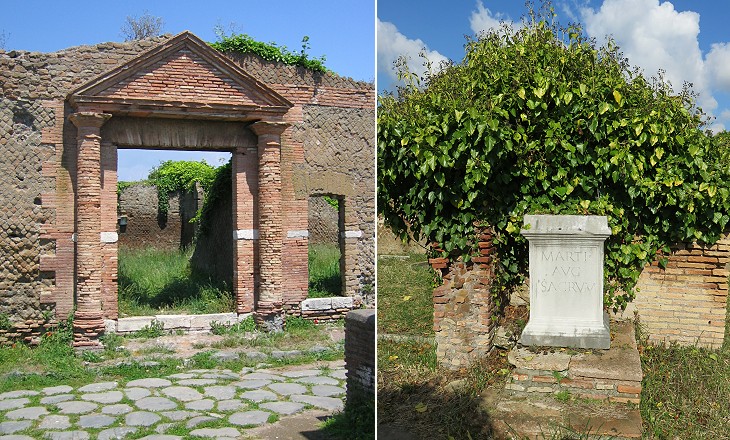 The actual function of some of the large buildings which archaeologists have named horrea is not always very clear. A horrea at the beginning of Cardo degli Aurighi has an elegant entrance and a number of small rooms arranged around a courtyard. They could have been either storerooms for valuable goods or shops selling the same articles as it often happens to see in an oriental bazaar (e.g. at Bukhara).
The seat of another guild was uncovered near that of Fabri Navales. It might have been the guild of the slaves and the freedmen. Because of their legal status they could not join the trade guilds, but they were allowed to have their own guild, something which is rather puzzling when applied to the slaves, whom we would expect to have had no rights whatsoever and more so that of "unionizing". A member of the guild donated a statue representing Mars/Augustus. The god was regarded as a founder of Rome because he was the father of Romulus; Emperor Augustus dedicated the temple of his Forum to the god.