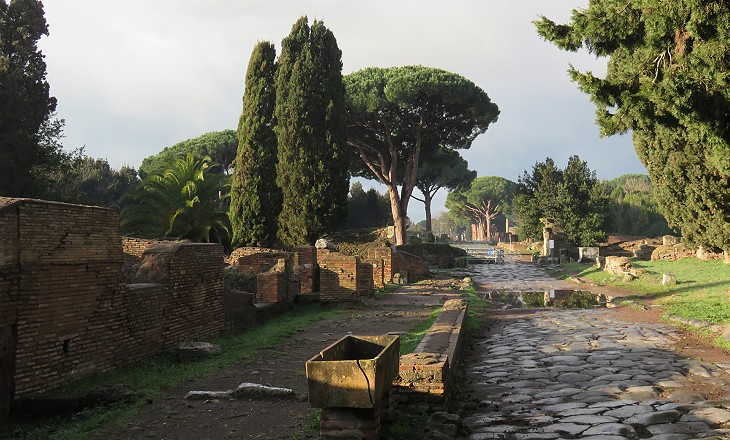 Via Ostiense and the Necropolis of Porta Romana

A quarter of a mile beyond the mediaeval town we enter upon the ancient city. (..) The long entrance street, now quite unearthed, is paved with great blocks of lava closely dovetailed into one another, and is lined with the low ruins of small houses and shops, chiefly built of brick, set in opus reticulatum. Here and there a tall grey sarcophagus stands erect.
Augustus J. C. Hare - Days Near Rome - 1875.
Porta Romana (the name is modern) was the main gate of Ostia and it was situated at its eastern end. It was the terminal point of Via Ostiense, the road which linked the town with Rome.
The low ruins of small houses and shops mentioned by Hare turned out to be a necropolis which stood outside Porta Romana along Via Ostiense. It was not the only necropolis of Ostia. A very large one was discovered at Pianabella, an area to the south of the town, and a small one outside Porta Laurentina. 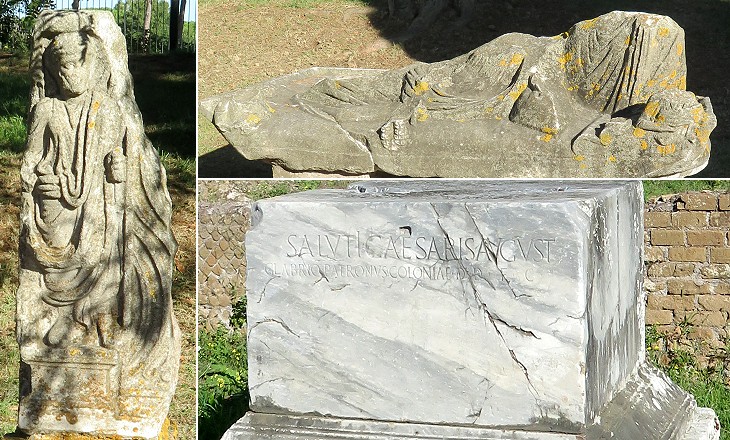 (left and right-above) Fragments of sarcophagi at the sides of Via Ostiense; (right-below) Cippus (a small pillar having an inscription) of Salus Augusti

The end of Via Ostiense and Porta Romana were among the first areas of Ostia which were excavated, but their current aspect was mainly designed at the end of the 1930s. A combination of pine trees and cypresses was felt to add to the evocativeness of the site. Fragments of sarcophagi which were deemed not worthy of being placed in a museum were scattered at the sides of the road for the same purpose.
The base of a statue of Salus Augusti (Health of the Emperor) was found in 1910 near Porta Romana and it still stands in its original location. Archaeologists assume that the statue portrayed a woman with a snake because of images on coins having the inscription Salus Augusti. 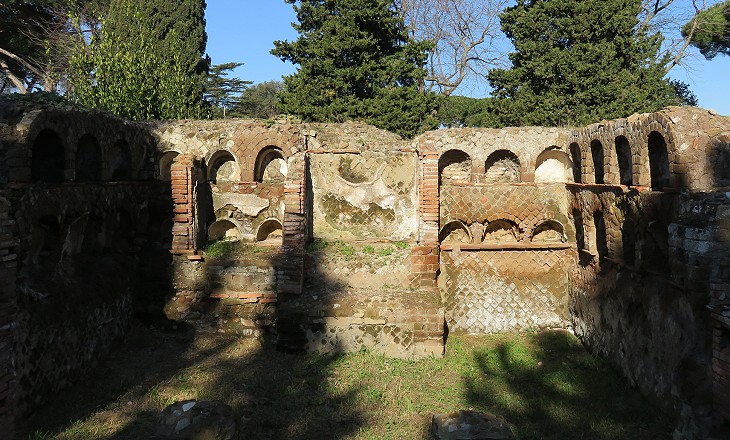 A large "columbarium"" with niches for ash urns

Cremation was the usual mode of burial in Rome until the IInd century AD when it was replaced by inhumation. Although large tombs were built for one person (e.g. those of Caio Cestio and Cecilia Metella), usually they were designed to house the ash urns or the sarcophagi of a family (e.g. Sepolcro degli Scipioni). Columbarium means dovecote and it was a tomb with many small niches where the ash urns were placed. It usually had an upper storey where funerary banquets and other ceremonies were held (you may wish to see a page on Roman funerary rites). 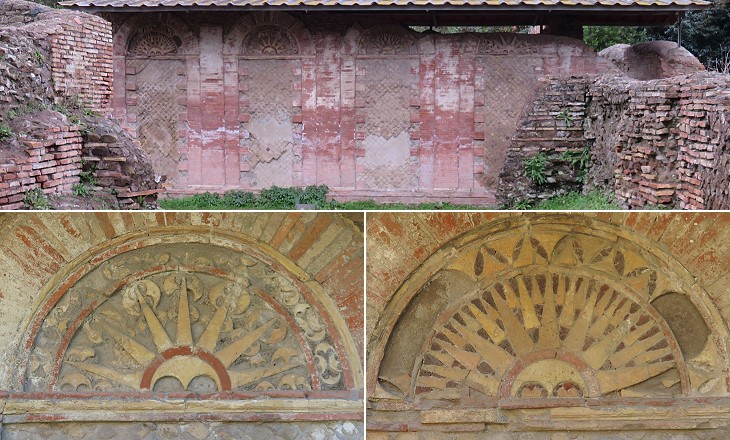 We do not know the name of the owner of this tomb, but we know that he did not want the building to pass on to his heirs, because on a lintel archaeologists found the following acronym: H(oc) M(onumentum) H(eredes) N(on) S(equetur). The side of the tomb towards Via Ostiense has an elaborate brick decoration, which perhaps depicts the rising sun and the sun at sunset. 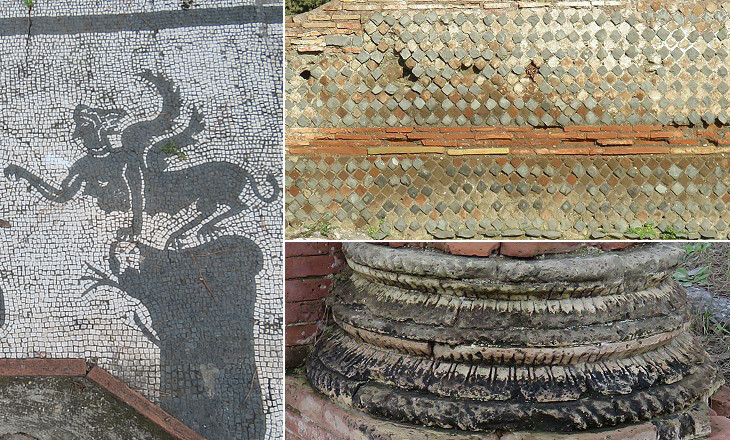 (left) Fragment of a mosaic depicting Oedipus' Sphinx from the necropolis of Pianabella; (right-above) wall of an "utilitarian" building; (right-below) plastered base of a brick column

The necropolis of Porta Romana included some buildings which were not tombs: houses for the undertakers (who were not allowed to live in town), workshops/warehouses of those involved in the decoration and maintenance of the tombs, etc. One of these "utilitarian" buildings has a wall in opus reticulatum/mixtum where small yellowish tufa and black basalt blocks were used to obtain a very decorative effect. A postern to the south of Porta Romana allowed direct access to the necropolis. 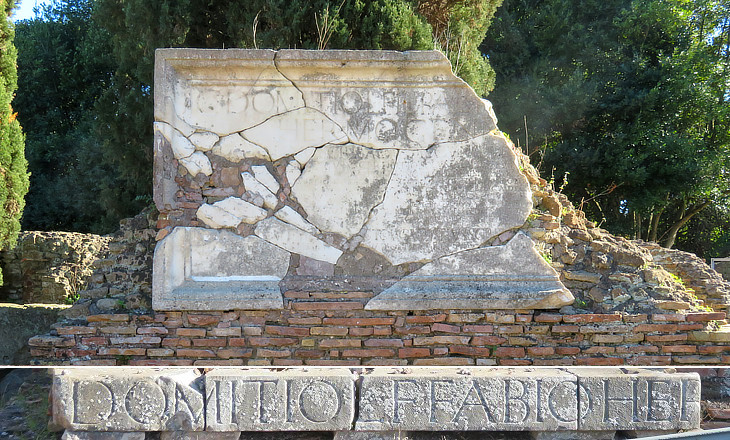 A tomb situated very near the gate was obviously more visible than one placed in a row of similar buildings. C. Domitius Fabius Hermogenes was a young knight and a magistrate of Ostia to whom an equestrian statue was erected in the Forum. He had public funerals and his tomb was built by his father very near Porta Romana on the site of a previous one. The building itself is almost entirely lost, but parts of its inscriptions were found and have been placed on a remaining wall. (left) Porta Romana and beyond it Decumanus Maximus, the east-west street which crossed the ancient town; (right) detail of the gate decoration

Porta Romana was built in the Ist century BC, but during the reign of Emperor Domitian it was rebuilt on higher ground. Archaeologists have identified the foundation of the first gate which was made of tufa blocks (they can be seen to the left of the main passage). The new gate was an imposing monument, more similar to a triumphal arch than to a defensive gate. It was entirely faced with a marble decoration of which only a few fragments have been found. Inscription on the external side of the gate

Tiny fragments of the inscription which stood above the arch of the gate were found and were integrated with modern additions in order to make them at least partially readable. According to a first reconstruction the inscription began with the words Senatus Populusque Coloniae Ostiensium (The Senate and the People of the Colony of Ostia) and towards the end it said portam vetustatem corruptam, a reference to a previous gate which was falling apart. Eventually the first words were interpreted as Senatus Populusque R(omanus) Coloniae Ostiensium (The Senate and the People of Rome - gave to - the Colony of Ostia). This new reading suggests that the construction of the gate was decided by the Roman Senate, which makes more sense because Ostia did not have senators, but a city council of 100 decuriones. 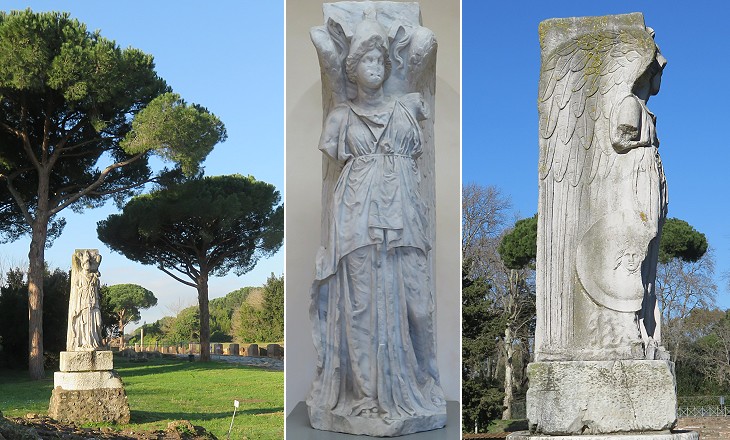 Today this statue stands at the centre of Piazza della Vittoria, a large empty space which does not correspond to a square of the ancient town. With a twin statue it was most likely placed at the sides of the external inscription of Porta Romana as a caryatid (it is actually a sculptured pillar). According to some art historians it is more likely a sculpture of the Ist century BC, rather than one of the time of Domitian (81-96 AD). Perhaps it decorated the old gate and it was reutilized for the new one. It has become a symbol of Ancient Ostia and it can be seen in monuments of Lido di Ostia, the modern seaside resort to the west of the Roman town. 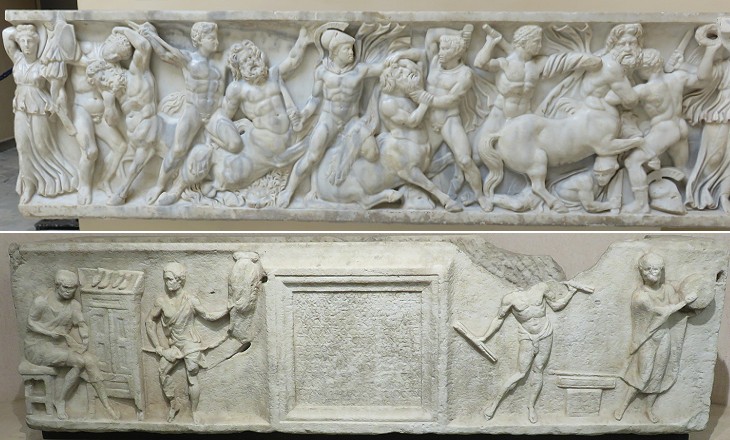 Sarcophagi from Pianabella: (above) Centauromachy (fight between men and centaurs) at Museo di Ostia Antica; (below) Sarcophagus of Titus Flavius Trophimas at Museo Nazionale Romano

Archaeologists found at the necropolis of Pianabella many interesting and finely executed sarcophagi. Their fronts were usually decorated with mythological scenes, but in some instances the scenes were related to everyday life. The sarcophagus of Trophimas tells us that not only the very rich could afford being buried in a sarcophagus. It shows on the left craftsmen at work (a shoemaker and a rope-maker) and on the right two musicians or perhaps two worshippers of Isis performing a ritual dance. From the inscription we know that Trophimas was a Greek artisan from Ephesus and the two craftsmen might have been friends of his.

The image used as background for this page shows a detail of a sarcophagus at Museo di Ostia Antica which portrays Cupid and Psyche, a symbol of eternal love. 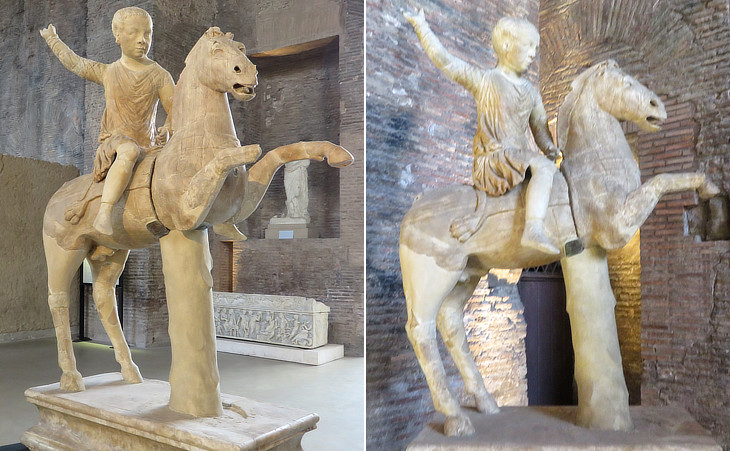 Museo Nazionale Romano: funerary equestrian statue of a boy (marble and alabaster - IIIrd century AD) which was found at Acilia along Via Ostiense; the body of the horse was the cinerary urn; the boy sits on the skin of a lion