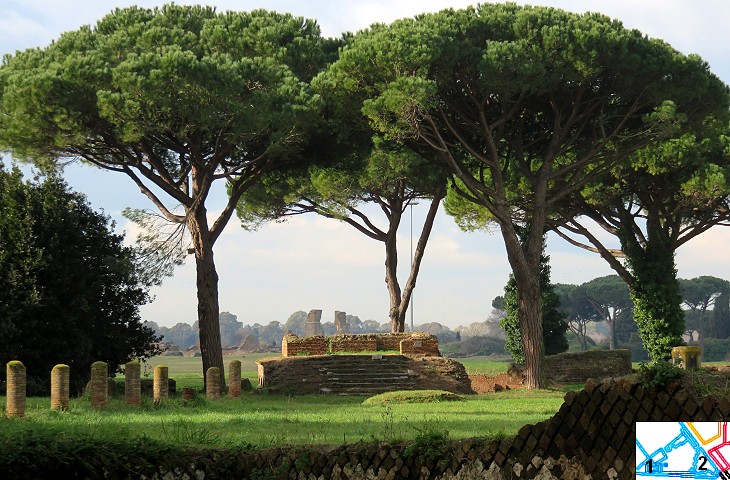 Travellers who entered ancient Ostia at Porta Romana found themselves in an area bursting with life because of its shops and baths. The very few who approached the town from Porta Laurentina felt as if they had arrived at a holy place. The area adjoining the gate is still redolent of its ancient religious character. Few visitors venture to this part of the archaeological site because it does not retain "must see" monuments and this adds to the magic of the place.

Magna Mother was the name the Romans gave to Cybele, goddess of fertility, who was worshipped on the Anatolian tableland. In Rome she had a temple on the Palatine. At Ostia a large triangular area (Campo della Magna Mater) was dedicated to her. A small temple to the goddess stood at one corner and it could be accessed by following a porch which began at Porta Laurentina.

(left) Cast of statue of Attis found at Santuario di Attis (original at the Musei Vaticani); (right) statue of Attis sitting on a lion (Museo di Ostia Antica); you may wish to see some interesting statues of Attis in other museums

In the woods, a Phrygian boy, Attis, of handsome face,
Won the tower-bearing goddess (Cybele) with his chaste passion.
She desired him to serve her, and protect her temple,
And said: Wish, you might be a boy for ever.
He promised to be true, and said: "If I'm lying
May the love I fail in be my last love."
(Attis failed to keep his promise and..)
He tore at his body too with a sharp stone,
And dragged his long hair in the filthy dust,
Shouting: "I deserved this! I pay the due penalty
In blood! Ah! Let the parts that harmed me, perish!
Let them perish!" cutting away the burden of his groin,
And suddenly bereft of every mark of manhood.
His madness set a precedent, and his unmanly servants
Toss their hair, and cut off their members as if worthless.

(left) Santuario di Attis; (right) statues of satyrs at the sides of the entrance and some details of them

A small temple to Attis, the first priest of Cybele, stood at the opposite end of Campo della Magna Mater. The worship of Cybele reached its peak during a festival held in March which ended in frenzy. It had many aspects in common with Bacchanalia, ceremonies in honour of Bacchus/Dionysus, god of wine. Attis was often portrayed with features typical of Dionysus and the satyrs at the sides of his shrine were associated with the latter god. 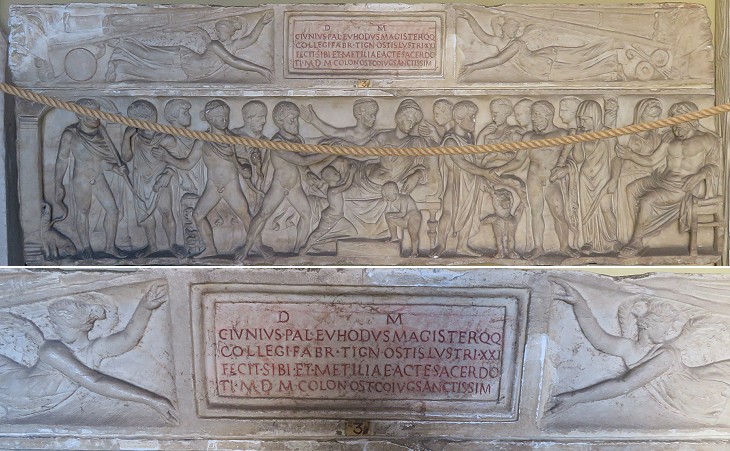 Musei Vaticani: Sarcophagus of C. Iunius Euhodus, head of the Guild of the Fabri Tignarii, and Metilia Acte, his wife, who was a priestess at the Magna Mater temple (M.D.M = Magnae Deum Matri). The sarcophagus is dated after 170 AD

And now the Roman rites were growing into disuse, not only in private, and within doors, but in public also. (..) the Senate commissioned Marcus Atilius, the city praetor, to rid the people of these superstitions. He called an assembly, in which he read the decree of the Senate, and gave notice, that all persons who had any books of divination, or forms of prayer, or any written system of sacrificing, should lay all the aforesaid books and writings before him before the calends of April; and that no person should sacrifice in any public or consecrated place according to new or foreign rites.
Livy - The History of Rome - Book XXV - translation by D. Spillan and Cyrus Edmonds
The excerpt makes reference to events which occurred during the Second Punic War, but Livy wanted to express the reservations Roman upper classes at the time of Emperor Augustus had towards some aspects of foreign religions. Roman citizens were forbidden to emasculate themselves so they could not become priests of Cybele. This may explain the presence of priestesses at the Magna Mater temple. Metilia Acte was the wife of an important man and she was defined as sanctissima (holiest) so we may assume she was a high priestess. The relief portrays events associated with the myth of Admetus and Alcestis, who loved each other so much that Alcestis was brought back to the mortal world by the intervention of Hercules or Persephone (learn more about this tale). Excavations at Campo della Magna Mater unearthed many statues and reliefs associated with the worship of Cybele, including pairs of lions which were usually portrayed at the sides of her throne. The image used as background for this page shows a small statue depicting a snake around the trunk of a pine tree. Such a trunk was brought into the temple on the day of mourning for Attis' death (the young man wounded himself under a pine tree). The snake was "borrowed" from the iconography of other gods (e.g. Apollo, Minerva, Aesculapius, etc). 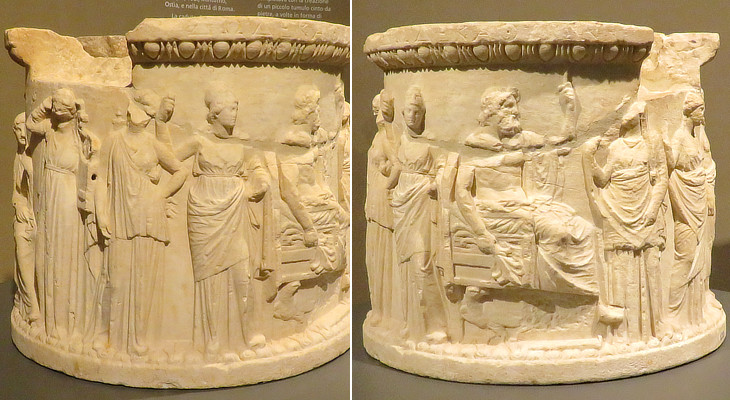 It was found in 1940 at Santuario di Attis. An eagle is sculpted under the throne of Jupiter who holds the thunderbolt in his right hand and the sceptre in the left one. See his statue with those of Minerva and Juno (the Capitoline Triad). 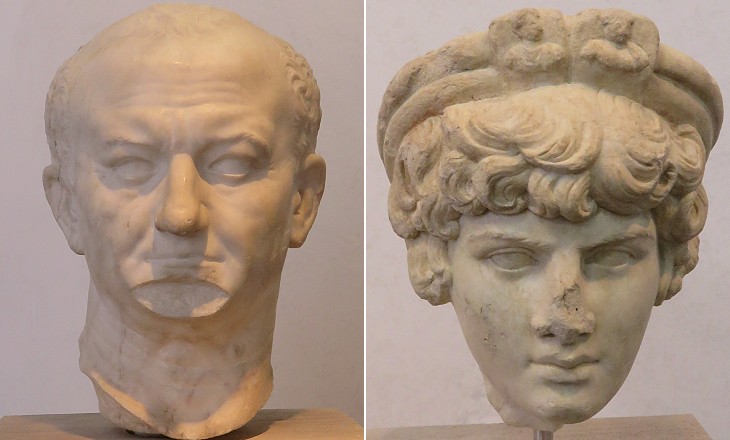 The two heads shown above were found at Campo della Magna Mater, but the statues to which they belonged most likely were not situated there.
The head of Vespasian was probably made after the Emperor's death and deification and it shows an effort to idealize his image.
Antinous was portrayed wearing a crown, but not one which could be associated with the worship of Cybele or Attis. It was most likely the crown worn by the flamen (priest) in charge of the cult of the emperors. The small relief on the left side of the crown might portray an emperor (that on the right side is very worn out). 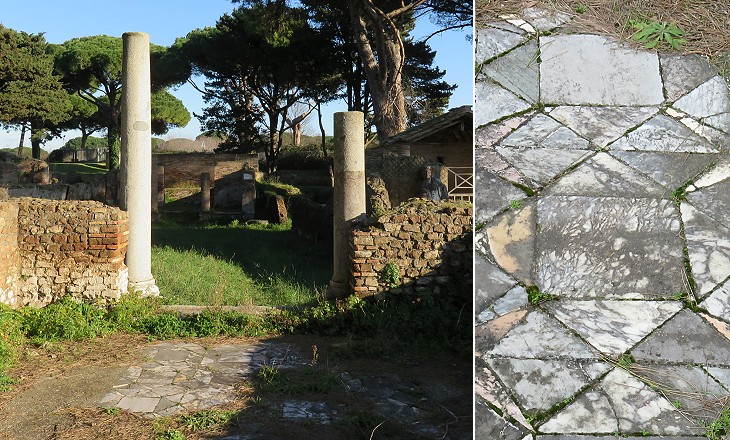 Campo della Magna Mater included two small buildings associated with the worship of Bellona, Roman goddess of war (Lat. bellum), from whose temple in Rome triumphal processions started.
The Romans had a formal ceremony for declaring war: Pater Patratus (Father Spokesman), high priest of Bellona, set forth to the border of the hostile territory, and launched a spear tipped with iron, or charred at the extremity and smeared with blood across the boundary, pronouncing at the same time a solemn declaration of war. When this was not practically feasible the spear was thrown on the ground in front of the Temple to Bellona. 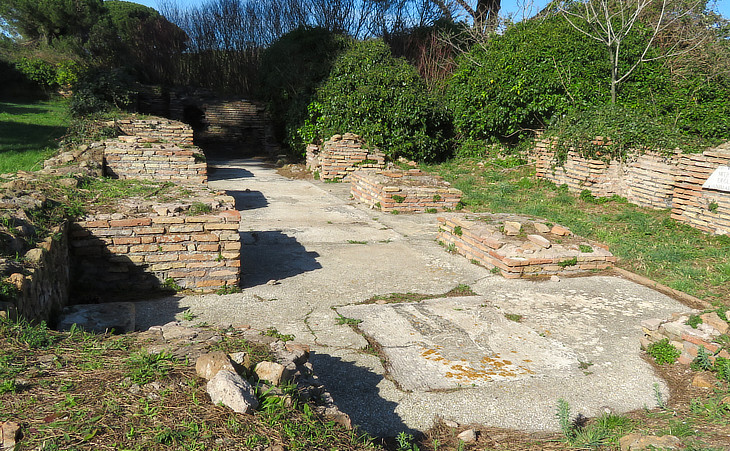 Some ancient beliefs promised immortality, e.g. the Egyptian ones, at least for the pharaohs and their inner circle. The religion of the ancient Greeks and Romans was rather silent on afterlife. Zeus/Jupiter and the other Olympian gods were prayed to for help on matters such as war, sickness, pregnancy, etc. but not for providing continued life after death. Eventually traditional Greek and Roman beliefs were supplanted by new ones which paid more attention to afterlife.
Mithra, a god whose cult initially developed in India and Persia, had many worshippers at Ostia in the II/IIIrd centuries AD. They were promised some sort of immortality by the priests of the god. 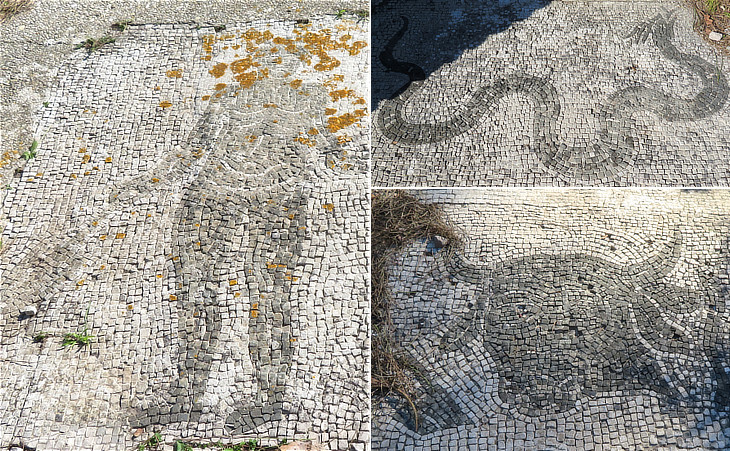 Mithraeum of the Animals: details of its floor mosaic depicting: (left) Cautopates holding a burning torch pointed down; (right-above) a snake, one of the initiation grades; (right-below) a bull

The cult was reserved to initiates who were ranked in seven grades. Ceremonies took place in narrow and long rooms having at their end a statue, a relief, a painting or a mosaic portraying the slaying of a bull by Mithra. A mithraeum with access from Campo della Magna Mater was built in the IInd century AD.

Musei Vaticani: frescoes of the first half of the IIIrd century AD from the Necropolis of Porta Laurentina: (above) Orpheus' descent to the underworld to rescue Eurydice; (below) a funerary banquet

A small necropolis was excavated in 1855-1867 some 200 yards south of Porta Laurentina. Some tombs were decorated with fine frescoes; that showing Orpheus and Eurydice is indicative of the attention paid in the IIIrd century AD to ways for escaping death. The depiction of a toast at a funerary banquet was a very traditional subject in tomb decoration (you may wish to see the funerary banquet painted in a tomb of Paestum in the Vth century BC), but this fresco seems a forerunner of a Renaissance "Last Supper". 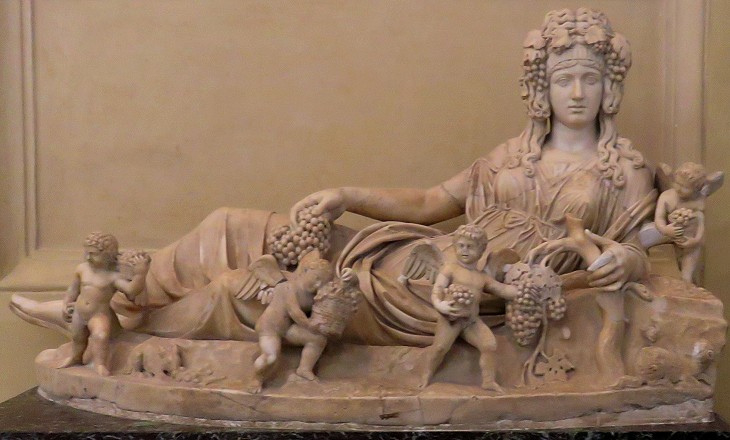 Musei Vaticani: statue of the Allegory of Autumn found at a Roman villa not very far from Porta Laurentina (you can see that portraying Winter in the introductory page)