- Neighbourhood outside Porta Marina - page one 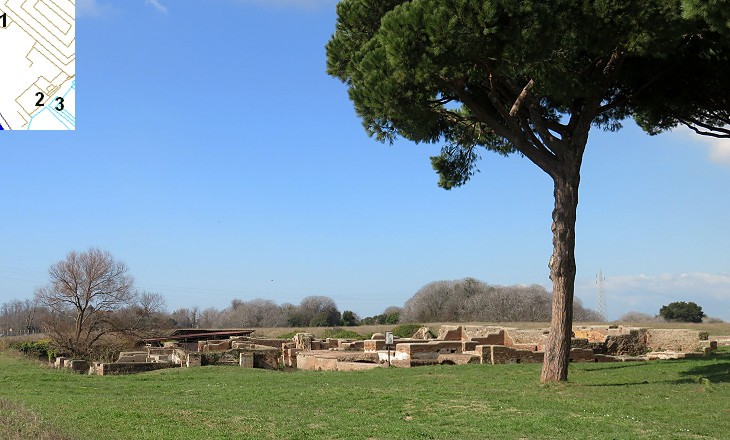 A bath establishment was built in ca 130 AD on the site of the ancient maritime walls and near a large residential complex which was developed at approximately the same time. It is very likely that the residents of this complex made up most of the clientele of the establishment. Excavations are yet to be completed and today the baths are in a sort of big hole. 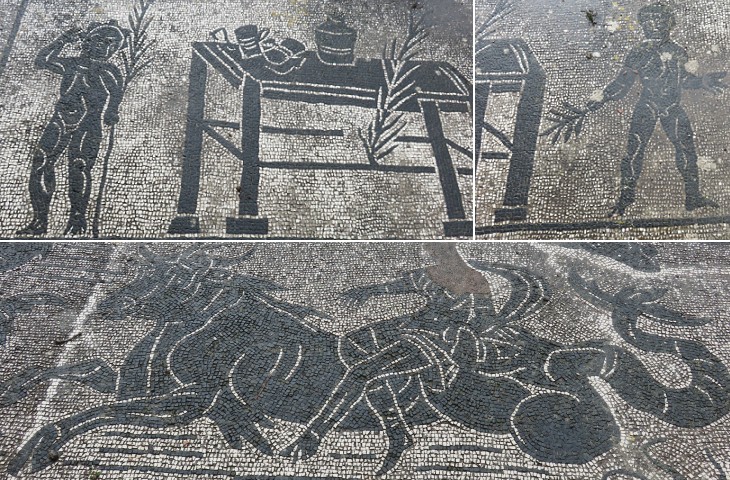 Terme Marittime: floor mosaics of the heated rooms: (above) athletes and prizes for them on a table; (below) a Nereid on a sea-monster

The baths were very near the coastline of the time and their layout was very elongated with a series of small rooms linked by narrow corridors. It appears that customers could reach the sea directly from the establishment. Sea bathing however was not as popular as it is today. It was regarded as a remedy against diseases and it was not done for pleasure.
A sea-water bath is an excellent corrective for swelling of the bosoms in females, affections of the thoracic organs, and emaciation of the body.
Pliny the Elder - The Natural History - Book XXXI - Translation by John Bostock and H. T. Riley. 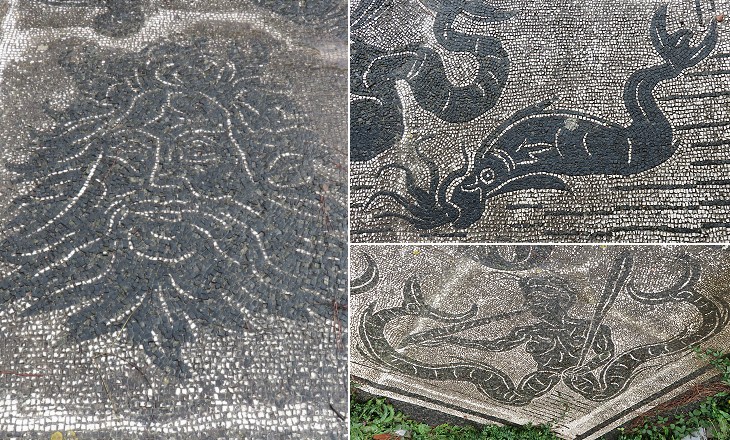 Terme Marittime: floor mosaics of the heated rooms: (left) Oceanus (you may wish to see some impressive depictions of Oceanus at Sousse); (right-above) a dolphin with an octopus in its beak; (right-below) a triton (the image used as background for this page shows another floor mosaic)

The floor mosaics of the baths were decorated with popular subjects, mainly related to sea life. Some details recall other mosaics at Ostia: a dolphin attacking an octopus decorates Taberne dei Pescivendoli and athletes at the sides of a table with prizes can be seen at Terme di Porta Marina. 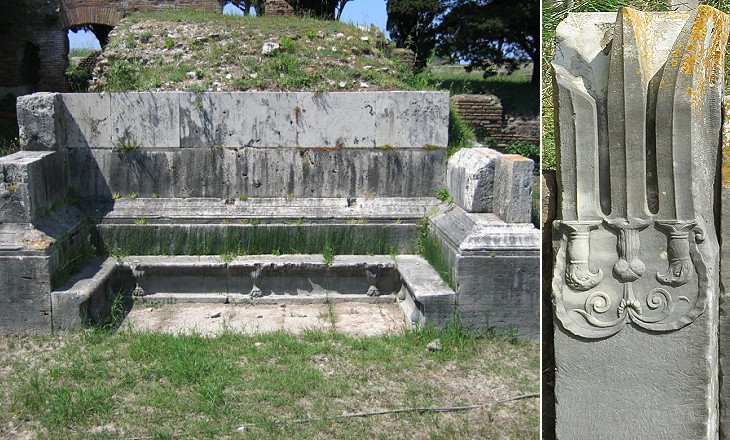 (left) Square base of a funerary monument outside Porta Marina; (right) element of its decoration resembling the blades of a "rostrum" (see below in this page)

Porta Marina was razed to the ground in the Ist century AD. Prior to that event the area outside the gate housed a small necropolis which was replaced by houses, baths and a small forum. Two funerary monuments of the late Ist century BC however were left untouched. Near the monument shown above elements of its decoration were found which suggested that the dead had a role in a naval battle. A circular cella stood on the square base, so that the monument had an aspect similar to a mausoleum at Aquileia. The name of C. Cartilius Poplicola is associated with a large restoration of the Temple to Hercules, in the centre of the town. His funerary monument was erected by the City of Ostia and the long inscription lists all the positions he held in the government of the town. In particular he was elected duovir, a charge similar to that of a Roman consul, eight times. A duovir was preceded by men holding fasces, bundles of rods, when performing his duties. The monument was decorated with sixteen fasces, two for each time he had been a duovir. Fasces included a projecting axe-blade which is not depicted in this monument. This absence has been interpreted as indicating that the power of an Ostian duovir was not as great as that of a Roman consul and that in particular he could not sentence a citizen to death. 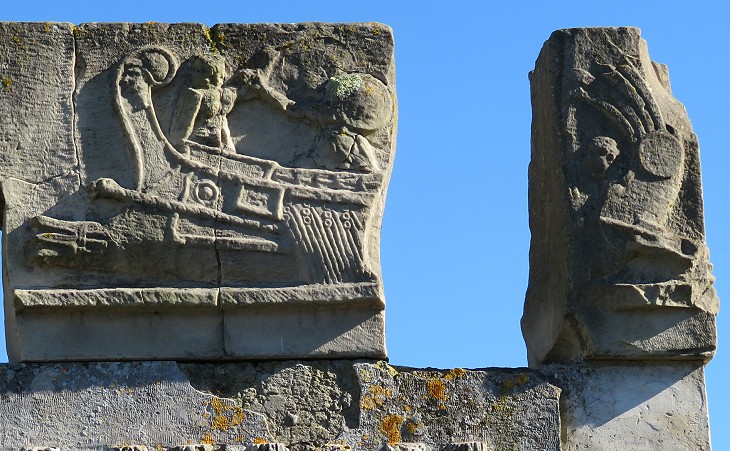 Tomba di C. Cartilius Poplicola: detail of a relief depicting a warship with a "rostrum"

Ancient warships were equipped with rostra, rams which were driven against an enemy ship. They had blades which enlarged the tear in the hull. They were typical of oar propelled warships, such as the triremes, because the driving and the subsequent withdrawing of the rostrum required a swift and accurate manoeuvre. The Romans placed the rostra of captured enemy ships on columns/altars in the Forum (you may wish to see a relief on Colonna Traiana which depicts Roman warships). 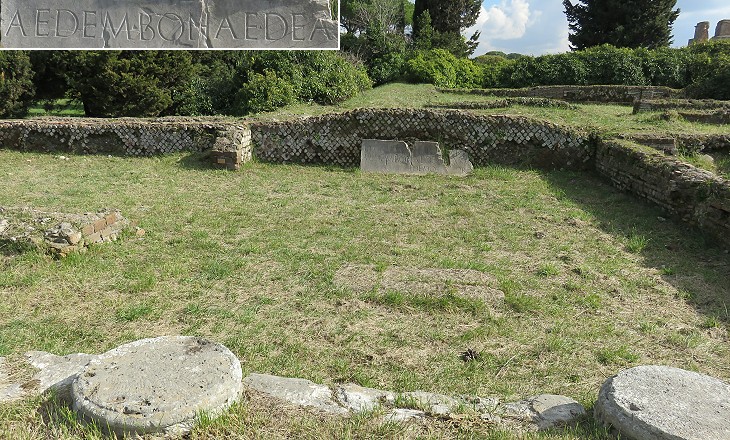 Bona Dea (Good Goddess) was a rather elusive deity of the Roman Pantheon. Her real name was not pronounced and a periphrasis (an indirect reference) was used instead. Ceremonies were kept secret and could not be attended by men. Her powers were mainly related to fertility. Evidence of a temple to her has been found in Trastevere, but a more important (lost) temple existed near S. Balbina. 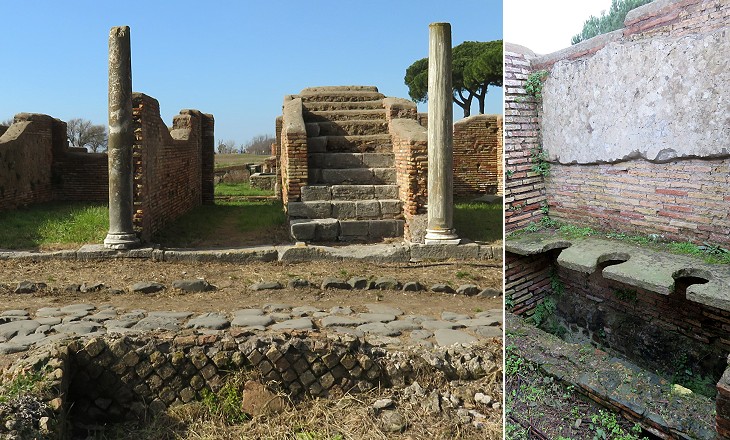 When excavations unearth a maze of walls of different periods, it is hard for archaeologists to exactly identify the purpose of a building. This is the case of Domus Fulminata which stands opposite Tempio della Bona Dea and adjoins the "unknown" funerary monument. It had a row of shops on the ground floor. The entrance led to a courtyard having on one side four large rooms and on the opposite one a small apartment. The end side of the courtyard was closed by a wall without passages. The fact that the apartment had a latrine with three seats suggests that it was used by other people in addition to the residents. 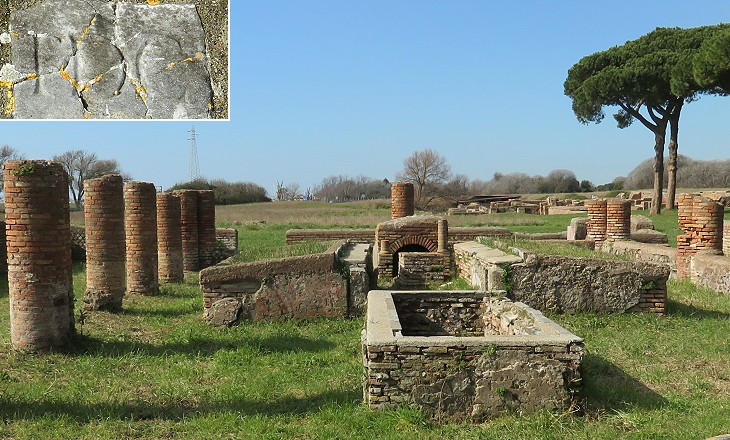 The house owes its name to a small inscription which has been interpreted as F(ulgur) D(ium) C(onditum) meaning that the building had been struck by Jupiter's thunderbolt during the day. The courtyard has two long brick "couches" which have led to believe that they could have been used for banquets related to the adjoining funerary monument. Another hypothesis put forward to explain the purpose of the building suggests it was a guild seat. 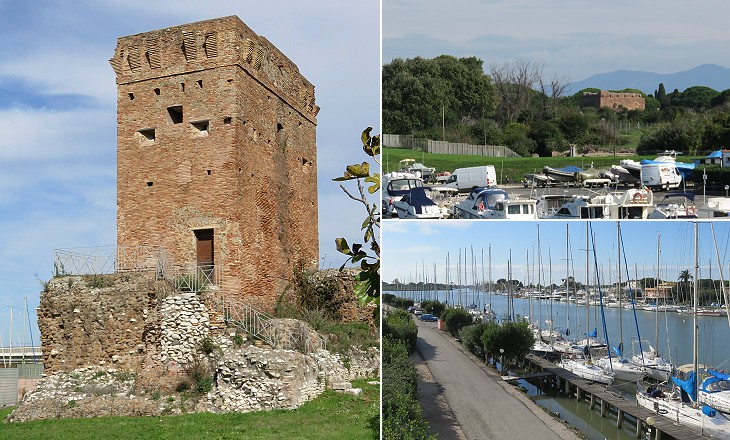 The Roman foundations of a building at the ancient mouth of the river are most likely those of a lighthouse built by Emperor Trajan. They were used during the Middle Ages to build a tower which protected the access to Gregoriopolis, a fortified village to the east of Ostia. In 1420 Tor Boacciana was thoroughly restored by order of Pope Martin V. Other changes were made in the following years, but after 1568 its defensive function waned because Tor S. Michele, a state-of-the-art tower/fortress was built on the new coastline. 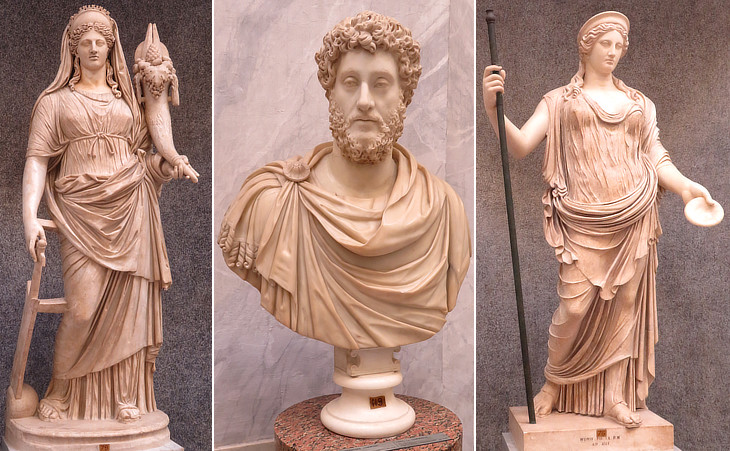 Musei Vaticani - highly restored statues which were found near Tor Boacciana: (left) Fortuna in 1798; (centre) bust of Emperor Commodus in 1798; (right) a goddess, perhaps Juno, in 1857

Other monuments outside Porta Marina can be seen in page two.