Area between Cardo Maximus and Via della Foce 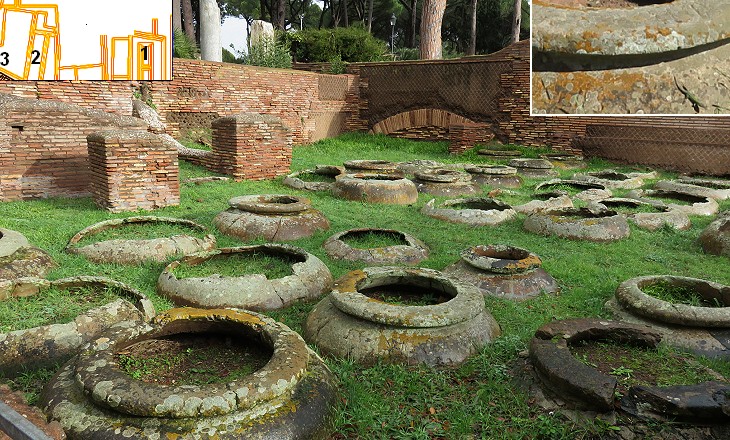 The quarter between the River Tiber to the north and the Forum and the Sacred Area to the south was mainly occupied by storage facilities and markets. The dolia were earthenware vessels which could contain up to 1,000 lt. (214 UK gallons). They were used to store olive oil or wine and they were buried in the ground to prevent excessive heat from damaging their contents. They were numbered which suggests good inventory practices were in place. This warehouse was built in the IInd century AD and it was utilized until the Vth century. You may wish to see a similar warehouse at Marseille. 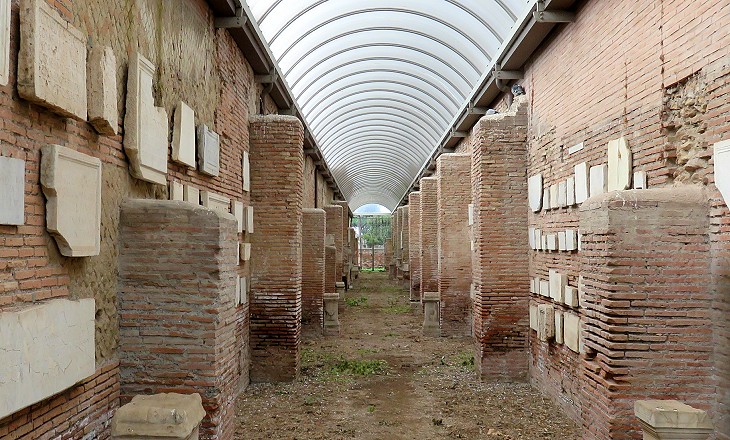 A long covered walkway (Lat. tectum means roof) crossed the area of the markets/warehouses from south to north. It ran parallel to the northern section of Cardo Maximus which was flanked by shops, but this street instead had openings only at its ends. Its long walls have been utilized to hang many of the inscriptions found at Ostia on them. 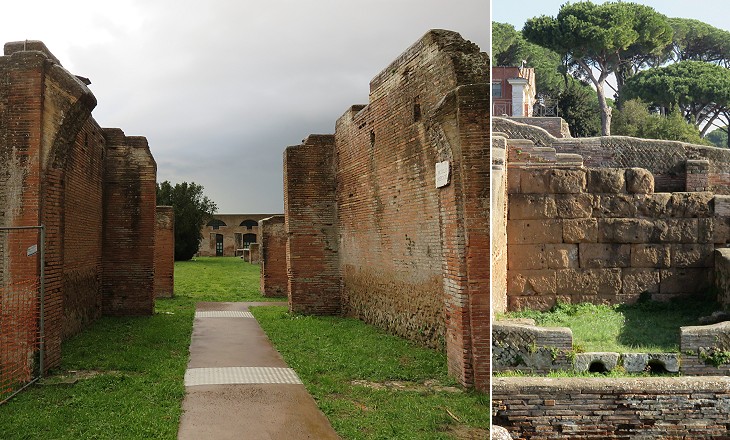 (left) Main entrance to Piccolo Mercato (Small Market); (right) ancient walls in its northern section, perhaps those of the "castrum", the fortified camp from which Ostia originated

The Greek term agora indicated a large square in an ancient town which housed both its political/religious buildings and its market facilities (e.g. at Aspendos). At Ostia these two functions were separated: the former was located in the Forum, the latter in a series of "malls" along the main streets or in purpose-built markets. Piccolo Mercato consisted of some thirty shops arranged around a double courtyard having a gabled portico. Almost all of the shops had an identical size and could be accessed only from the courtyards. 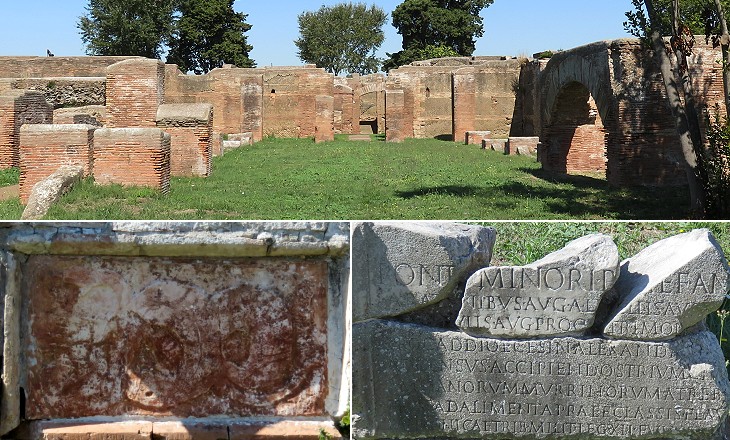 Piccolo Mercato: (above) view of its northen side; (below-left) a relief portraying a snake, most likely a "Genius Loci", a deity protecting the location; (below-right) inscription celebrating an "eques" (knight) who held many positions

An inscription at Piccolo Mercato, but it was not found there, provides an interesting example of cursus honorum (career progression) in the late IInd century/early IIIrd century AD. Our man had assignments in various regions of the Empire and in various branches of its administration to gain what today would be called a "global business exposure". He began his career in Cappadocia by serving in the tribunal of a Roman legion, he then was moved to the Roman fleet on the River Danube. After this initial military training he held civilian positions in Rome, Gaul and Egypt, prior to returning to Rome and eventually becoming an adviser to Emperor Caracalla. 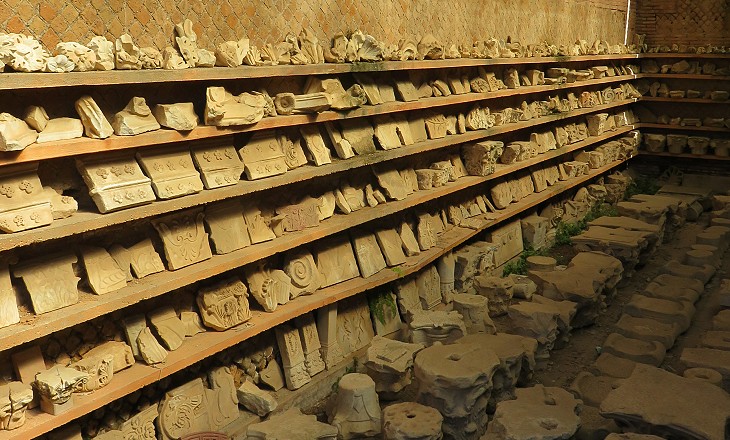 It is hard to believe that marble capitals had feelings, but, assuming they had them, we can imagine their joy when they were unearthed by archaeologists after having spent centuries underground. They might have thought the time had come for them to stand at the centre of a museum hall to be admired by crowds of visitors. They did not know that competition was rife for ancient capitals at Ostia and that most of them would have ended in a forgotten storeroom at Piccolo Mercato. 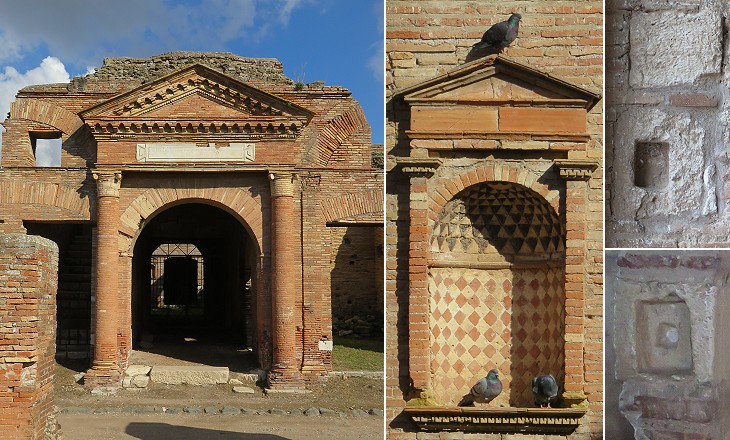 Replace Epagathiana et Epaphroditiana with Marks & Spencer and you will understand the purpose of this building south of Piccolo Mercato. Epagathus and Epaphroditus, two freedmen, built it in ca 150 AD. Storerooms/shops were arranged around a courtyard where two brickwork niches housed small statues. Based on the locking systems found in many parts of the building, archaeologists assume the shops or storerooms housed valuable goods. 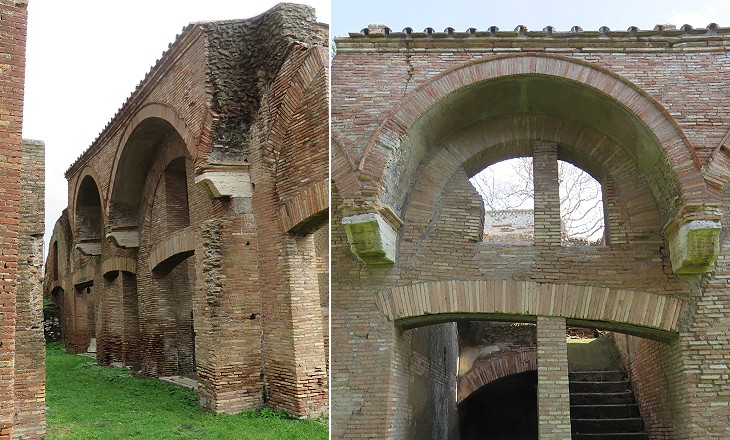 Other shops were situated in the streets to the north of Piccolo Mercato. Perhaps their owners lived in the apartments above them. In this block as well as in those near Caseggiato di Diana archaeologists have found evidence of balconies. This suggests that the tenants of the blocks had a greater tendency towards socializing than the inhabitants of the domus (individual houses of the wealthy families) which did not have openings on the street. 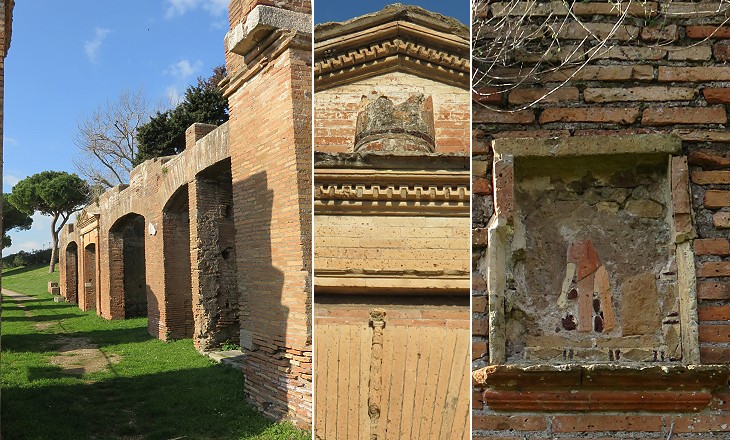 (left) Street of the "Mensores" (Grain Measurers); (centre) portal with a grain container and a stick, symbols of their trade; (right) nearby terracotta relief which depicted Fortuna (Luck)

Annona, the goddess protecting the grain-supply chain to Rome could not do everything by herself, she needed help. Mensores frumentari, the official grain measurers, performed their duties at the arrival of the ships from Africa and Egypt, when the load entered the storehouses of Ostia and when it was shipped to Rome. 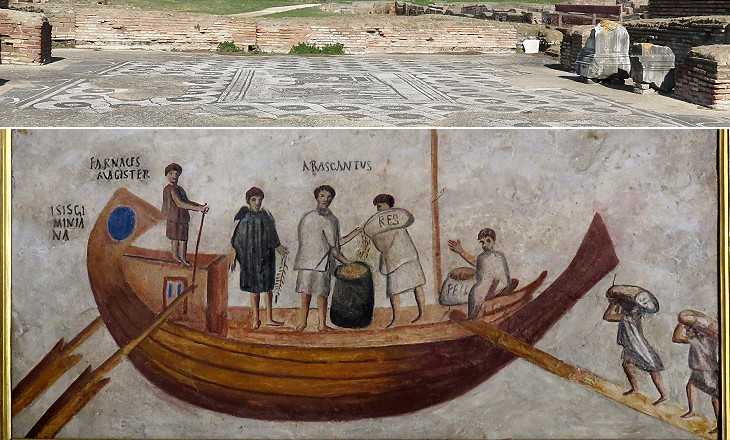 (above) Aula (Hall) Mensores; (below) Musei Vaticani: fresco found in 1865 near Porta Laurentina and depicting measurement activities on board of "Isis Giminiana" (not necessarily an Egyptian ship because seamen worshipped Isis as a protector of the ship throughout the whole Roman Empire, e.g. at Sabratha)

The Grain Measurers had a (lost) temple dedicated to Ceres, Roman goddess of grain crops, along Via della Foce, a street almost parallel to Cardo Maximus which led to the river. A nearby hall for meetings was decorated with a mosaic very similar to a fresco depicting grain measurement on a ship. 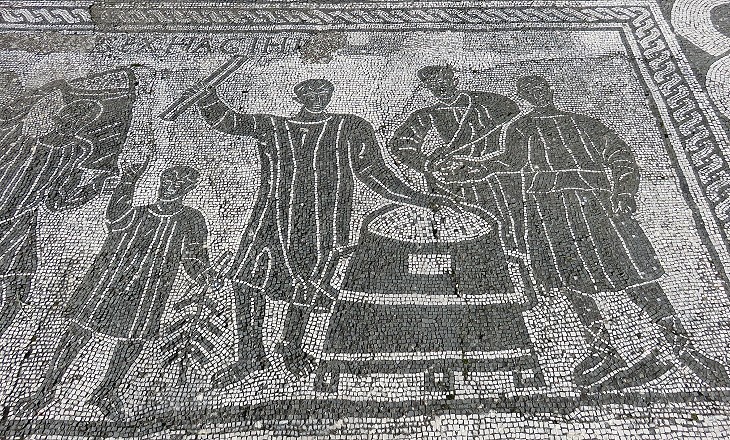 Aula Mensores: central scene of the floor mosaic. A detail of the surrounding decorative pattern can be seen in the image used as background for this page

Both the fresco and the mosaic show an attendant holding a tool in his left hand. The mosaic helps better in understanding its use: it was a stick or a rope with nine protruding edges which helped in counting the sacks which were unloaded (in the mosaic the attendant is clearly shown in the act of counting with his right hand). 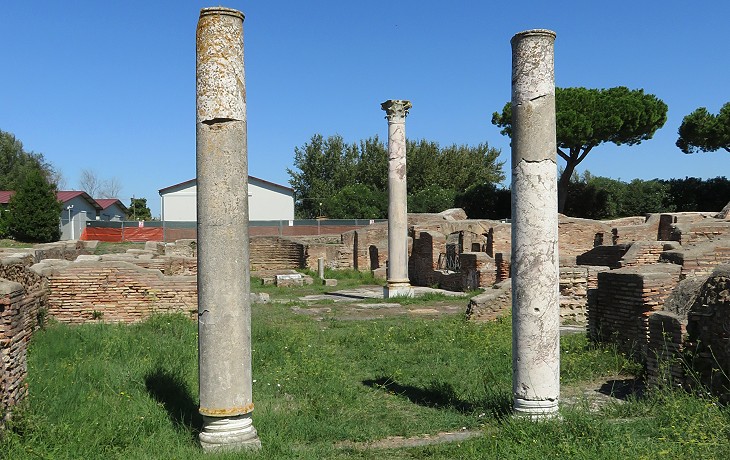 The neighbourhood between Cardo Maximus and Via della Foce contained a large bath establishment in addition to warehouses, shops and other buildings related to commercial activities. It appears it was privately owned as were most of the baths found at Ostia. It is dated early IInd century AD and it had a rectangular shape with the calidarium (hot room) at its south-western end. Terme del Mitra: (left-above) main entrance; (left-below) detail of a floor mosaic; (right) a service area to the west of the baths with two openings in the floor

The baths are named after a mithraeum which was installed in the IIIrd century in the lower level of the baths. It had a separate entrance and the owners of the baths allowed the openings of two skylights to give light to it. 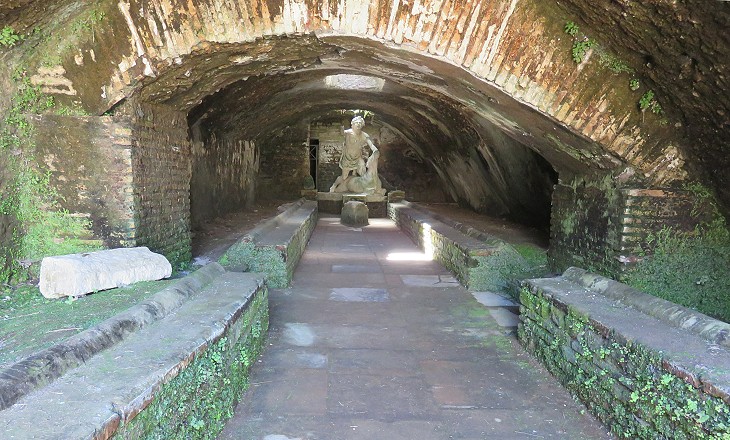 Gian Lorenzo Bernini, the XVIIth century architect who devised new ways of placing statues and reliefs in Baroque chapels, would have highly praised the design of this mithraeum where a skylight was opened right above the statue portraying the god in the act of slaying a bull. This detail indicates that ceremonies took place in daylight. The fact that this and other mithraea (e.g. a very interesting one at Capua) were placed underground is not due to a need/desire for secrecy, but because they had to have a cavelike appearance (according to tradition the god was born out of the rock of a cave). The size, location and design of the mithraea rule out that actual sacrifices of bulls took place there. 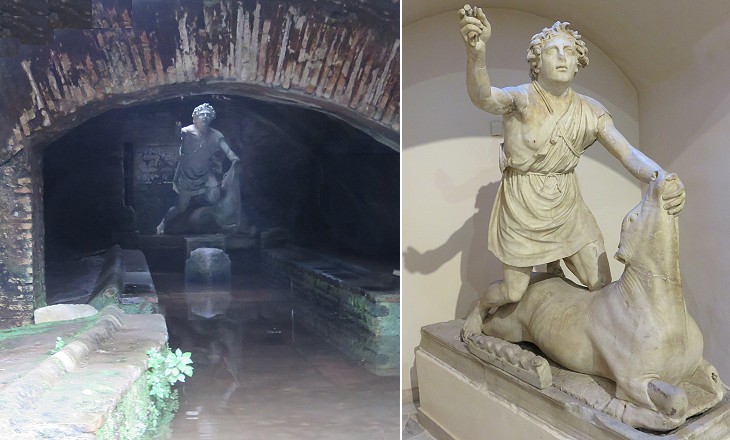 The head of the bull and the head of Mithra were found in a channel of the mithraeum. The reconstruction of the statue was perhaps not entirely accurate; in the large majority of reliefs and paintings portraying the slaying of the bull, the god is portrayed while turning his head away from the animal (e.g. at Mitreo Barberini).