- Area between the Theatre and the Forum 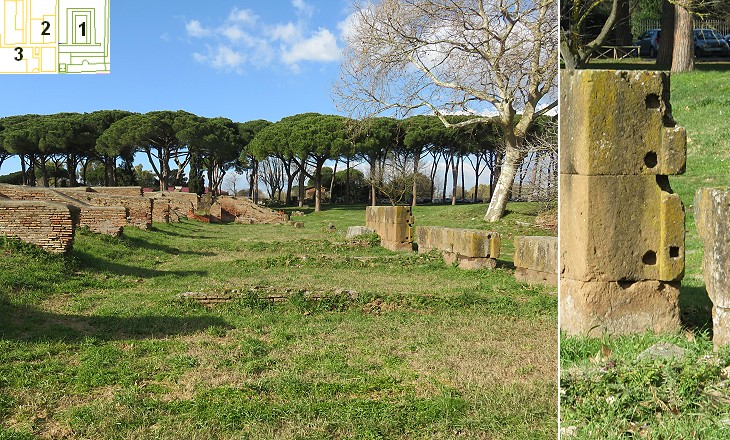 The opening of a new harbour at Portus at the initiative of Emperors Claudius and Trajan led to demolishing some of the harbour facilities at Ostia to make room for the theatre and other public buildings. Ostia however retained a large reserve stocking capacity which was required by the fact that the supply chain from the provinces was interrupted during winter. Large warehouses/granaries which had direct access to the river on their northern side were built in the Ist century AD and maintained until the early IIIrd century. They were mainly made up of tufa blocks, probably because these retarded fire better than brick walls.
The warehouses have almost vanished because their tufa blocks were utilized in the construction of Gregoriopolis, a fortified settlement, and at facilities associated with the extraction of salt from sea water. 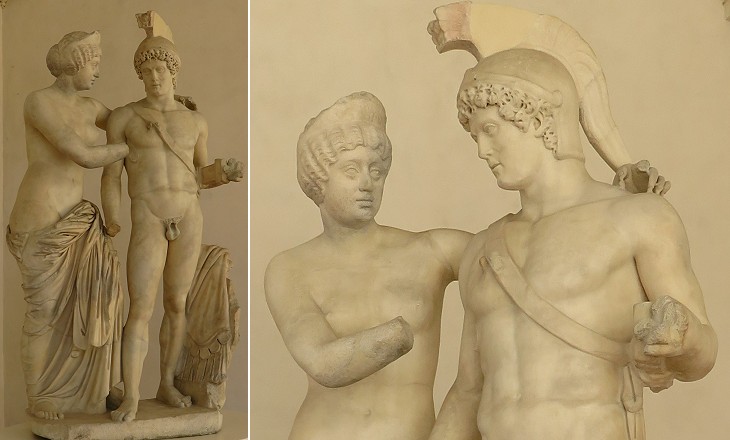 Museo Nazionale Romano: statues of Venus and Mars found near the Great Horrea

A large statuary group was found in many pieces near the Great Horrea in a building to which it clearly did not belong. It could be that the pieces of marble were on their way towards lime kilns which have been identified inside the Great Horrea. The statues were reconstructed and they portray Venus and Mars, two gods who played a major role in the foundation of Rome: Venus was the mother of Aeneas and Mars the father of Romulus and Remus. The hairstyles of the couple, and in particular that of Venus, are those in fashion towards the end of the IInd century AD and archaeologists believe the faces are those of either Emperor Marcus Aurelius and his wife Faustina Minor or Emperor Commodus and his wife Crispina. The original location of the group has not been established. 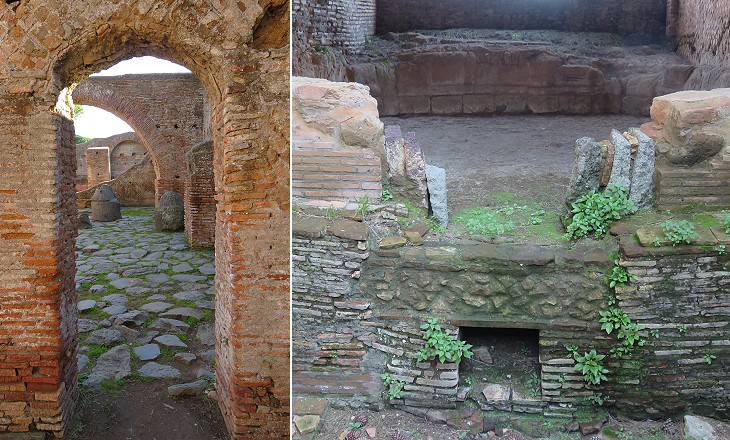 The four insulae (blocks) between the Great Horrea and the Forum are the neighbourhood of Ostia which most recalls Pompeii because of evidences of ordinary life which were found there. It was a densely populated neighbourhood with large buildings divided into apartments. Its inhabitants could rely on freshly baked bread which was made in a large establishment.
It was built at the time of Emperor Hadrian, but changes were made to it until the early IIIrd century.

The bakery was equipped for grinding the grain to make the flour it needed. A similar large bakery/mill was situated in the southern neighbourhoods along Cardo Maximus. The grinding equipment consisted of two granite parts: donkeys made the upper one rotate on the other and this explains why the large room had the same pavement as a Roman street. The equipment shows some artistic pretension, as the upper part resembles a sack used for carrying grain (you may wish to see the tomb of Marcus Virgilius Eurysaces, a wealthy baker with a relief showing grinding activities). It is likely that the grinding stones were used in succession to obtain a finer flour powder. 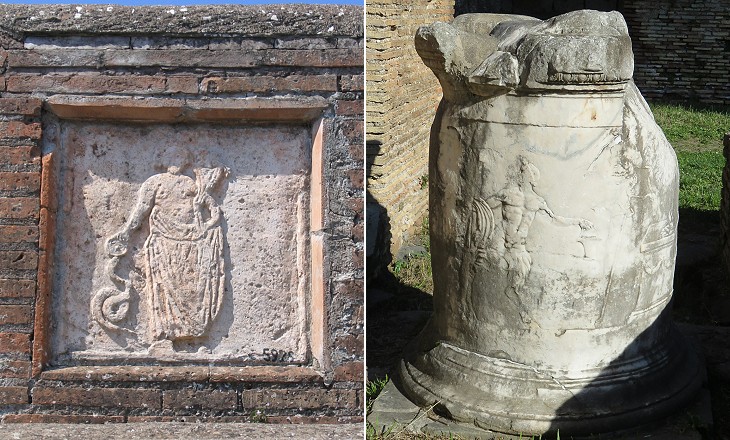 A relief depicting Genius Loci, the protective deity of the site, was most likely placed on a wall when Casa dei Molini was built. Not far away archaeologists found a circular altar dedicated to the Lares (of the vicinity), Roman deities who protected houses and crossroads. The relief and the altar are evidence of the domestic religion of the ancient Romans. They erected temples to Jupiter, Venus or Isis, but for the protection of their families and homes they relied on ancestral household deities (you may wish to see some altars to the Lares at Pompeii). Fortuna (Luck) is another deity which was worshipped at home rather than in large temples (exception made for the shrine to Fortuna Primigenia at Palestrina). 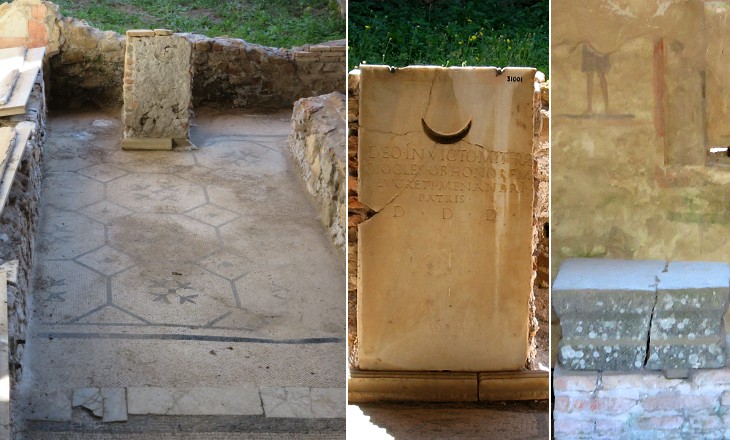 In the early IIIrd century the traditional beliefs of the Romans were gradually and partly replaced by new ones coming from the eastern provinces of the Empire. Long and narrow rooms with benches where small groups of initiates worshipped Mithra have been found at many locations in Ostia.
C. Lucretius Menander was a priest of Mithra to whom a mithraeum installed in the IIIrd century near Casa dei Molini was dedicated. In the inscription the god is called Deo Invicto (Invincible God) and his name is written under a half-moon opening (behind which a lamp was placed).
Another long and narrow room near Casa dei Molini was a small shrine to Silvanus, Roman god of woods and flocks. We do not know much about Silvanus, but suddenly at the time of Hadrian he became popular (you may wish to see a relief portraying Antinous, Hadrian's favourite, as Silvanus which was found near Nettuno, not far from Ostia). 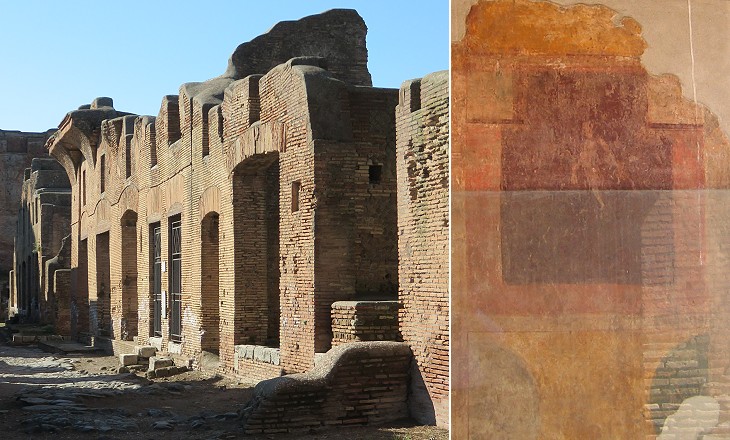 Caseggiato di Diana was named after a small terracotta relief portraying the goddess. It is a large building of the IInd century which according to archaeologists had a mezzanine and three upper stories. The apartments on the first floor had balconies. It had an internal courtyard with a fountain and the whole building stood a low platform. Over time many changes were made to its internal layout. The latest coins found in the building belong to the reign of Emperor Probus (276-282). This could indicate that it was abandoned and in part dismantled to reuse its bricks towards the end of the IIIrd century. This house had three upper stories. The first one was accessed from the ground floor, whereas the upper ones were reached via an external staircase. Based on the decoration and some works of art found inside it must have been a luxury residence. At one point it was turned into an inn. Eventually in the late IIIrd century or early IVth century, perhaps after a flood, its lower parts were filled with rubbish and broken amphorae to obtain a new higher ground level. 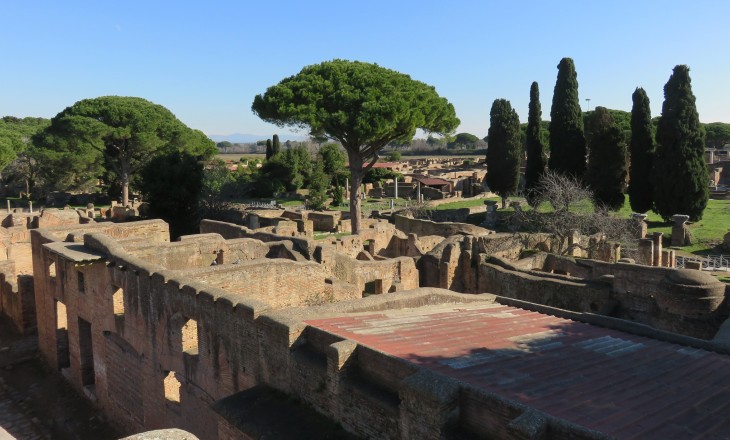 All this neighbourhood was covered with earth until it was excavated in the second half of the XIXth century and during First World War. Similar to the ashes which covered Pompeii, the layer of earth preserved the lower parts of the buildings.

Thermopolium (tavern) and some of its frescoes

The shops of a building which stood opposite Casa di Giove e Ganimede were turned into a large tavern in the IIIrd century. Archaeologists called it thermopolium (a place where something hot is sold) because they found evidence of cooking utilities. They called caupona wine bars where food was sold but not prepared. Food and beverages were painted on the walls to help customers make their orders, but today the interpretation of some of the frescoes is uncertain. The two objects hanging from a nail have been described as red cheese, watermelons or musical instruments. 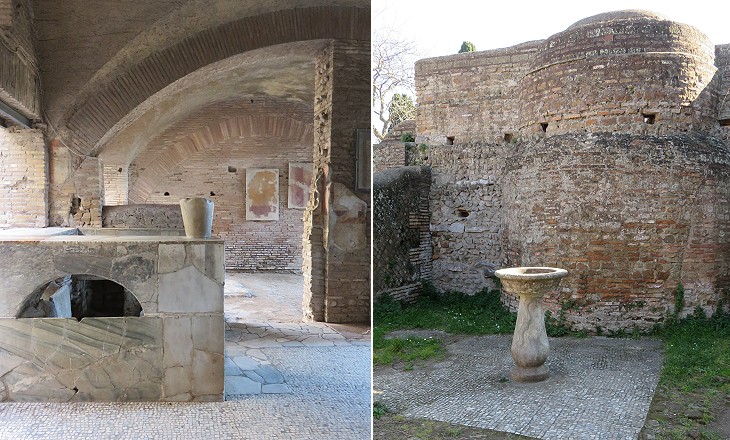 The marbles which decorated the dining room were taken from other buildings. Customers could sit on benches and on fine days they could use a small rear garden. The image used as background for this page shows a flower in a fresco in the dining room.