You may wish to see an introductory page on Ostia or a page on the main monuments of the Forum first. 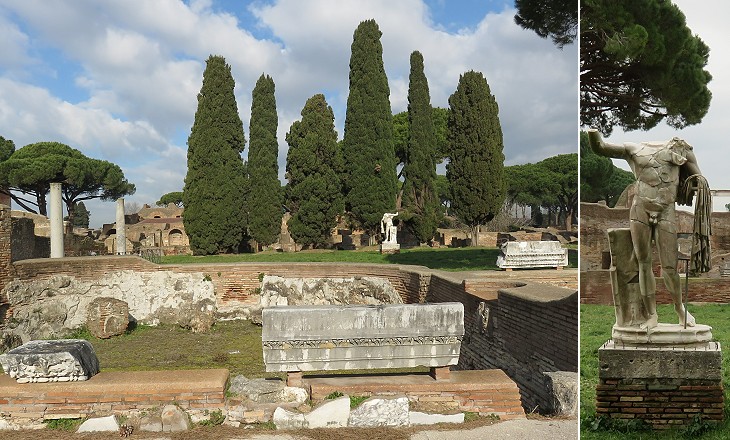 The area of the Forum was dug in the late XVIIIth/early XIXth centuries with the sole purpose of finding valuable works of art and many ancient walls were destroyed in the process. These excavations have prevented archaeologists from fully understanding the use/history of some areas. A large square with brick columns supporting a portico on two sides was opened in the IVth century in the eastern side of the Forum. It appears that it stood on the remains of baths built at the time of Emperor Hadrian. The emperor himself was perhaps portrayed in a statue broken into many fragments which was found on the site. Today a cast of the statue has been placed at the centre of the square, but it was most likely housed in a hall of the baths, as at Sagalassos. The Emperor was portrayed as a god or a hero, rather than as a military commander (you may wish to see his statues as a commander and as a hero at the theatre of Perge). The Forum was a gathering point for the citizens of Ostia who spent hours there and ... had to satisfy some biological needs. A narrow street on the south-eastern side of the Forum led to a public latrine which was installed in the site previously occupied by two adjoining shops. It had twenty seats. In general we assume the Romans sat on the openings of the marble benches, but not all archaeologists agree on that and some suggest they defecated in a squatting posture. 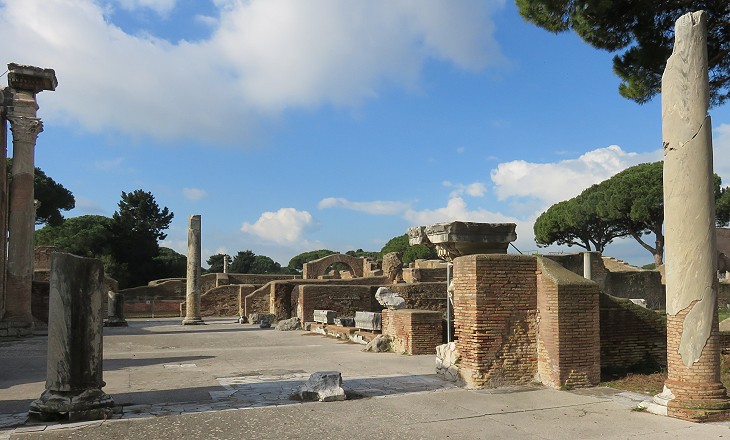 The baths built at the time of Emperor Hadrian were perhaps destroyed by fire, because towards the end of the reign of Emperor Antoninus Pius, his successor, the construction of new large baths began to the south of the old ones. The large frigidarium was restored at the time of Emperor Constantine, by Flavius Octavius Victor, praefectus annonae, i.e. the magistrate in charge of the grain supply to the City of Rome. The inscription celebrating the repairs he made was written in Greek (a fragment of it can be seen in the image used as background for this page). 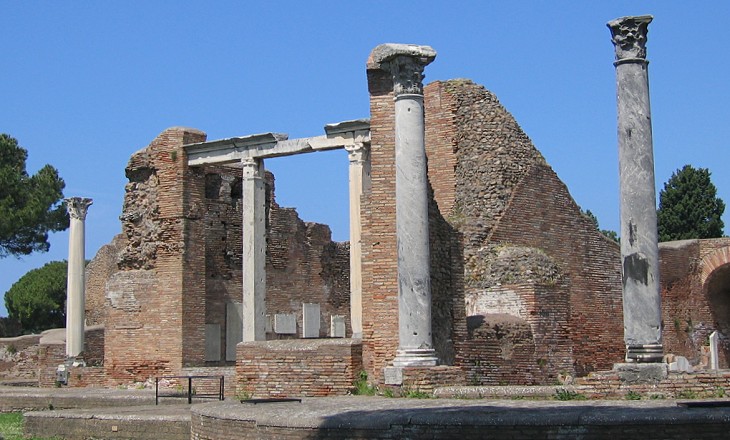 The layout of Terme del Foro complied with recommendations made by Vitruvius, a Ist century BC civil and military engineer in De Architectura, a treatise on construction techniques. Similar to what can be noticed at Caracalla's Baths the hot rooms had a south-western exposition in order to reduce heating costs. There were five hot/tepid halls on the southern side of the baths all with different shapes and decoration (the square pillars of one of the halls recall the Doric Atrium at Villa Adriana). They were built on a raised platform, underneath which was the hypocaust, the bath heating system. 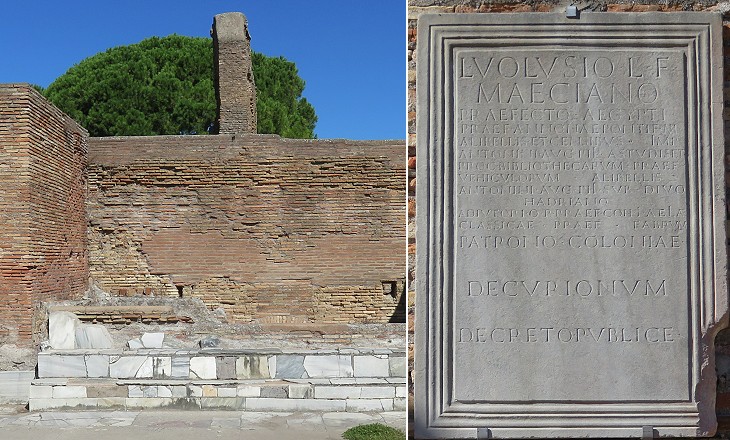 Archaeologists have found a number of hairpins in the halls of the baths, which were therefore open to women (most likely in the morning). Some finely preserved inscriptions found in the Forum have been hung on the walls of the calidaria. They shed light on the careers of magistrates and advisers to the emperors. Lucius Volusius Maecianus was a famous jurist of his time and a friend of Emperors Antoninus Pius and Marcus Aurelius. He held many important positions, including that of superintendent of the imperial libraries and eventually he was appointed Praefectus Aegypti, Governor of Egypt. The decuriones (highest magistrates) of Ostia erected a statue to him in ca 160. 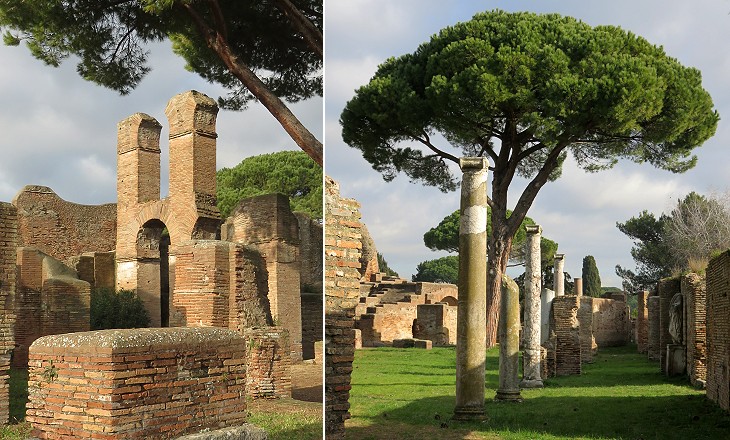 Terme del Foro: (left) pillars at the eastern end of the baths; (right) southern portico of the palaestra

We know that the whole of Ostia was supplied with water by an aqueduct which entered the town at Porta Romana. Its existence is deduced more by the presence of bath establishments in many parts of the town, rather than by actual remains of the aqueduct. This fact is rather puzzling because Roman aqueducts were very solidly built. Two very high pillars might have supported a branch of the aqueduct which supplied Terme del Foro.
A large space surrounded by colonnaded porticoes stood to the south of the hot rooms. It served as a palaestra for exercising or simply as a garden in which to walk. The baths were decorated with statues and friezes portraying the traditional gods and these were most likely still in place when St. Augustine visited Ostia in 387 and spent a day at the baths (perhaps these ones) to mitigate the grief for his mother's death. It appears that restorations to Terme del Foro were made in 385-389 by Vincentius Celsius Ragonius, praefectus annonae, one of the last recorded holders of that position. 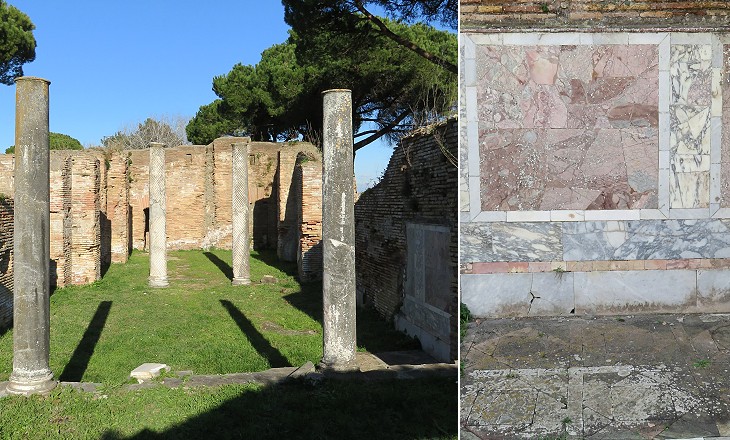 A series of buildings to the south of the palaestra housed shops and taverns, but one of them was decorated with fine marbles which indicate it had another use. Some archaeologists suggest it was the seat of a guild, probably a very important one, others believe it was an annex to the baths, perhaps a library. 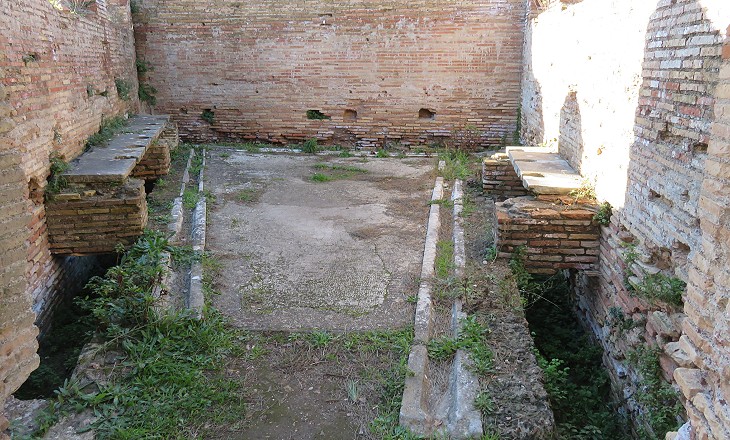 A third latrine which stood almost opposite this one was situated in the western side of Cardo Maximus.