- The Town of Dion
(Mosaic portraying Dionysus at Dion)

The town of Dion had some 20,000 inhabitants, but during the festival and games which accompanied the main celebrations at its sanctuaries, its population grew significantly. 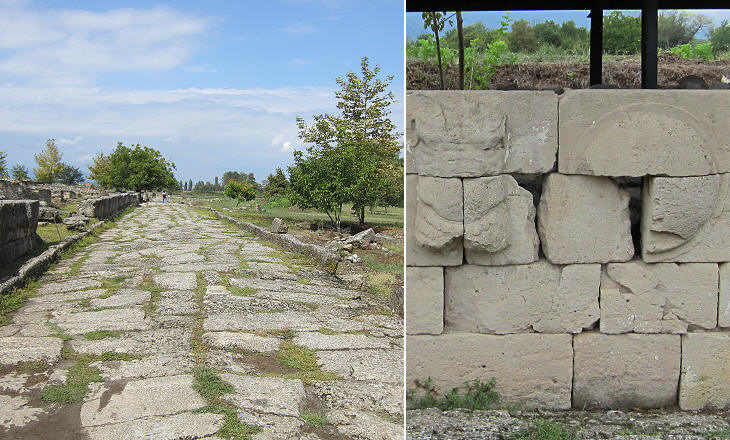 (left) Main street; (right) decorated blocks of a basilica which were utilized to build new walls

(October 1807) Some foundations of the walls of the city to which these monuments belonged are visible also among the bushes; but it would be in vain to attempt to trace them in such a labyrinth without a guide, an assistance which I cannot succeed in obtaining, even to show me some ruined churches.
William Martin Leake - Travels in northern Greece - 1835
The town had a square layout with a north-south main street which divided it into two sections; the larger one included the forum, marketplace and public baths; the smaller one was mainly residential with the exception of the praetorium, a guest house for state officials. The street was paved in the IIIrd century AD; in the late IVth century the size of the town shrank and walls were built along the main street by using materials taken from existing buildings, including decorated blocks from a basilica in the forum. 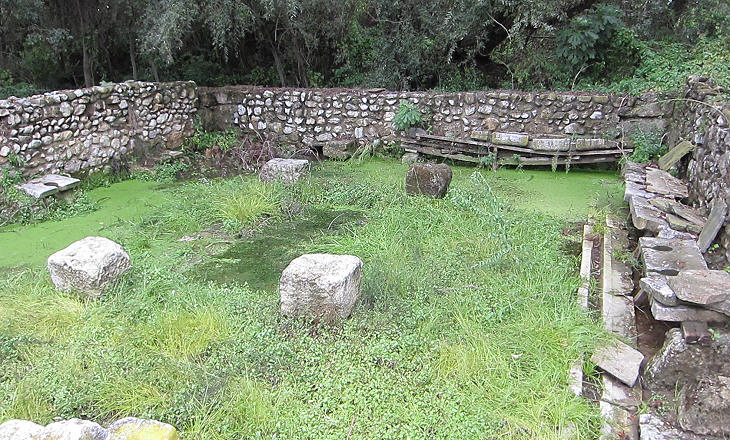 Public lavatories of the praetorium

The praetorium consisted of a limited number of small bedchambers, a large dining room and two taverns; the guests and the customers of the taverns could use large lavatories placed in a separate partially covered courtyard; because there are some thirty seats, it is likely that the facility was used also by temporary visitors; a fountain was located at the centre of the lavatories; flushing water ran under the benches. 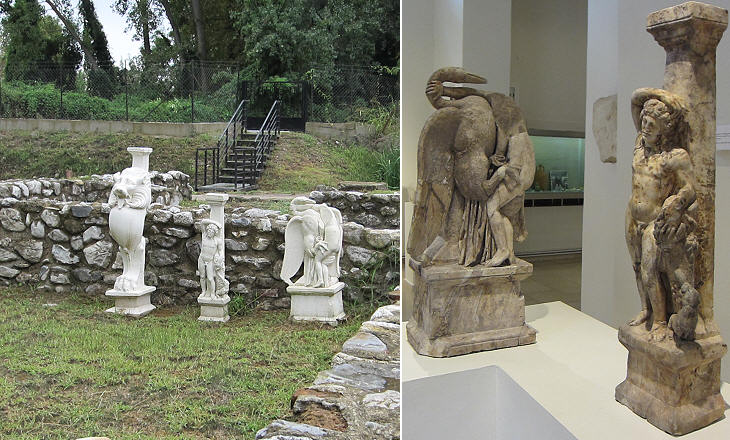 (left) House of Leda; (right) the original statues in the Museum of Dion: Leda (left) and Dionysus (right)

The residential area behind the praetorium was occupied by a series of large houses which have been named after statues, mosaics or inscriptions which were found there; while the lavatories show that ancient Greeks and Romans had a relaxed approach to corporeal needs, some of the works of art found in these houses show that they also had a relaxed approach to sex. According to the most common account the union of Zeus (in the form of a swan) with Leda, resulted in the birth of Helen of Troy. At Dion, as well as in Pompeii and Herculaneum it was depicted in a very realistic way. 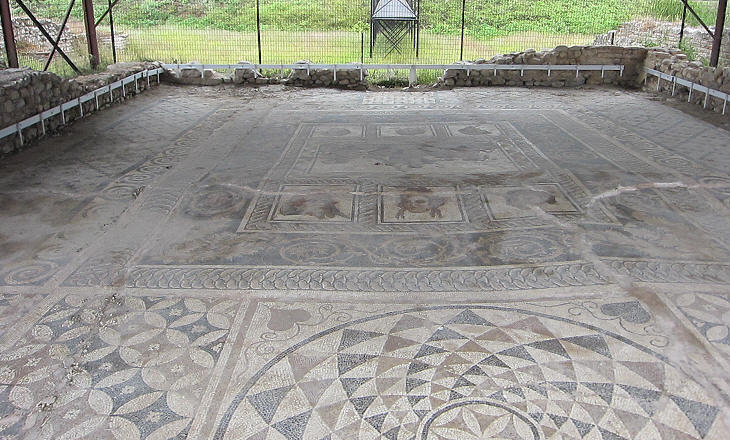 Villa of Dionysus - mosaic of the banquet chamber

Several statues and other works of art depicting Dionysus have been found at Dion, but his name is attached to a large residential complex inside the walls, the main hall of which is covered by a complex mosaic having at its centre the god riding a chariot drawn by two panthers; the presence of so many references to this god is not due to strong religious feelings, but rather to a way of life (carpe diem) aimed at capturing the good things of life, as Dionysus was the inventor of winemaking and was associated with frenzied feasts. 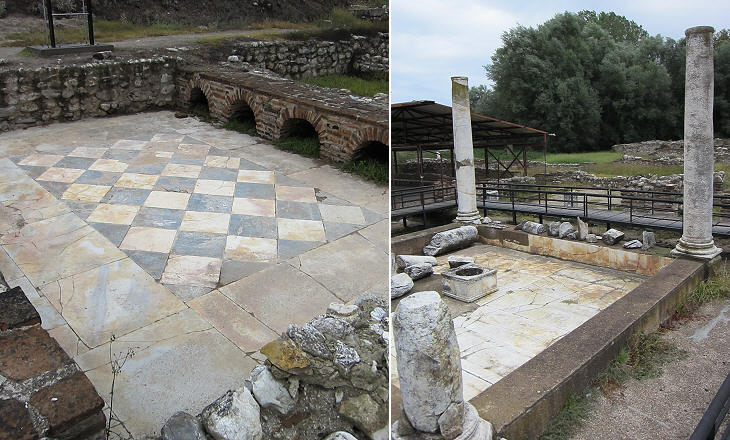 The complex had all the required facilities for a comfortable life including a furnace which provided heating to the private baths and a library; the decoration was not limited to mosaics, but included different kinds of marble. 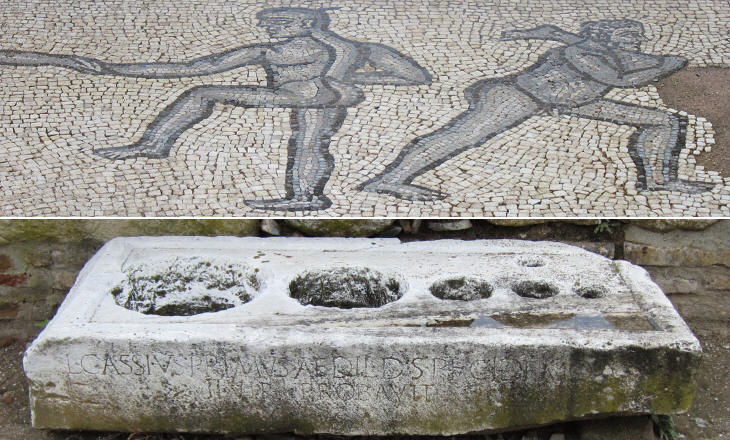 Polygonal building, probably a market hall, containing: (above) mosaic portraying wrestlers; (below) standard measurements for liquids and commodities in grains

Life was well organized at Dion and authorities took care of providing the town with well-appointed public buildings; today if we enter a public office we are likely to see works of art celebrating the Nation or Progress or some other rhetoric concept; the mayors of Dion instead thought their citizens would enjoy seeing scenes of their favourite entertainments; the pig-tail hairstyle was typical of Roman athletes of the IIIrd century and it is known as cirrus in vertice (top curl). It can be seen in mosaics in Rome and Aquileia.
The Roman system of government of a town was based on the aediles, officers having specific responsibilities in: a) the maintenance of streets, public baths and buildings (cura urbis); b) the functioning and supply of marketplaces (cura annonae); c) the organization of games and festivals (cura ludorum); Lucius Cassius Primus, an aedile at Dion, provided his fellow citizens with a set of standard measurements which they could use to check the exact content of containers; in line with the Roman tradition the inscription says that the officer probavit (personally tested) the correctness of the measurements (you may wish to see Ponte Fabricio in Rome for an identical inscription and another set of standars measurements at Pompeii). 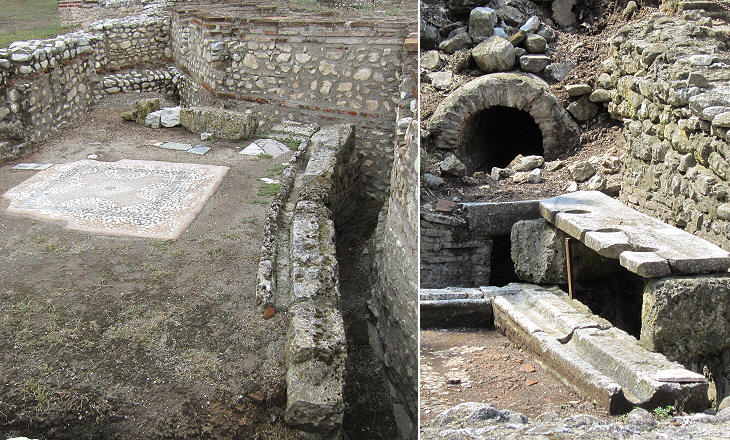 Public lavatories: (left) at the polygonal building;(right) at the Great Baths

The earthquakes and floods which have destroyed almost completely the upper parts of the buildings of Dion spared one aspect of Roman civilization which usually does not attract much attention, while it represents a technological development which was forgotten in the following centuries; Europe had to wait until the XIXth century to see systems of flushing toilets again. You may wish to see other Roman public facilities at Ostia and at Uthina in Tunisia. 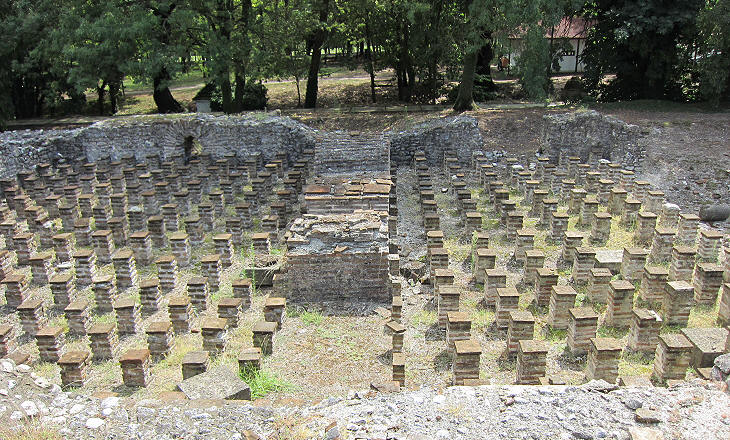 The Great Baths of Dion were built in the IInd century AD near the forum; the complex included an odeon (a small roofed theatre) and a large hall decorated with mosaics where people socialized; usually the vaulted halls of baths are among the buildings which best stand the ravages of time, but this is not the case in Dion, perhaps because of the strong earthquakes which hit the town. 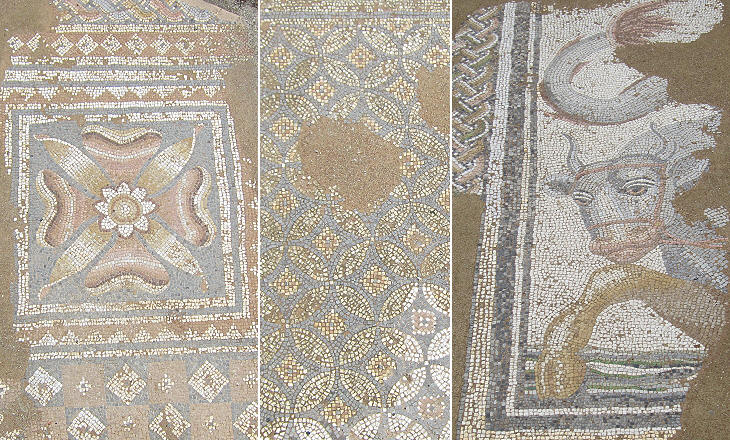 Great Baths: detail of the mosaics

Of the vast mosaic decoration of the baths only a few fragments remain; it is a pity because they are particularly vivid and show ingenuity of design. 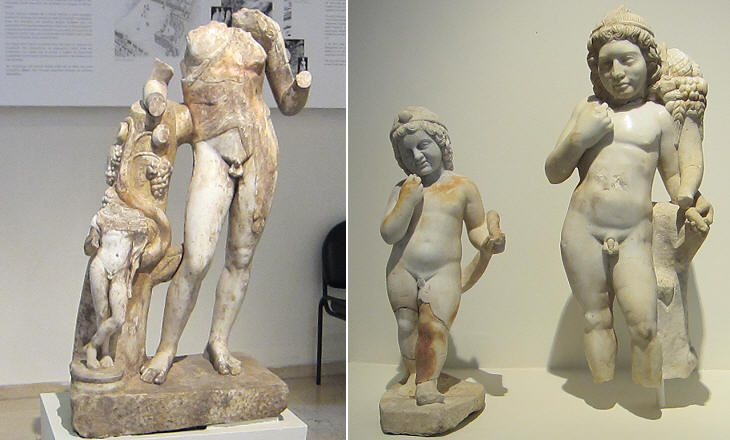 The Museum of Dion has a large selection of works of art and objects of daily life found in the town and in the sanctuaries; they confirm the impression that Dion was a wealthy town, the inhabitants of which enjoyed life, made the best out of living in sight of the gods and did not care too much about them. 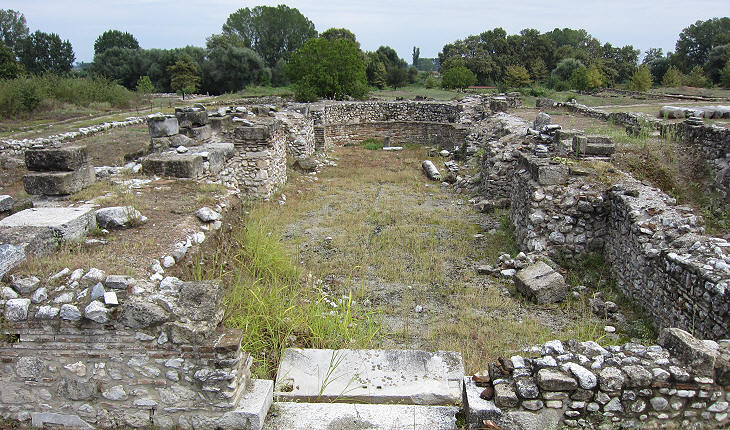 The economy of Dion was based on the sanctuaries and on religious festivals; there is evidence that a basilica was turned into a church and that Dion had a bishop, but probably the town did not survive for very long after the worship of the Olympian gods was banned by Emperor Theodosius in 392 AD.

During a conversation which we held upon the subject of the mountain Olympus, the people of this place informed us, that the priests of a village called Scamnya, upon the side of Olympus, go annually, upon the twentieth day of June, to perform mass upon the top of the mountain. This is one of the most curious instances of the remaining ceremonies of the antient religion of Greece. Perhaps the old altar may yet remain whereon the sacrifices to Jupiter were offered.
Edward Daniel Clarke - Travels in various countries of Europe, Asia and Africa in 1799-1804

Return to page one to see the sanctuaries of Dion or go to page three which covers the Fortress of Platamonas.