- Syracuse - Other Archaeological Areas
(left) Temple to Hercules at Agrigento; (right) detail of the apse of Palermo's Cathedral 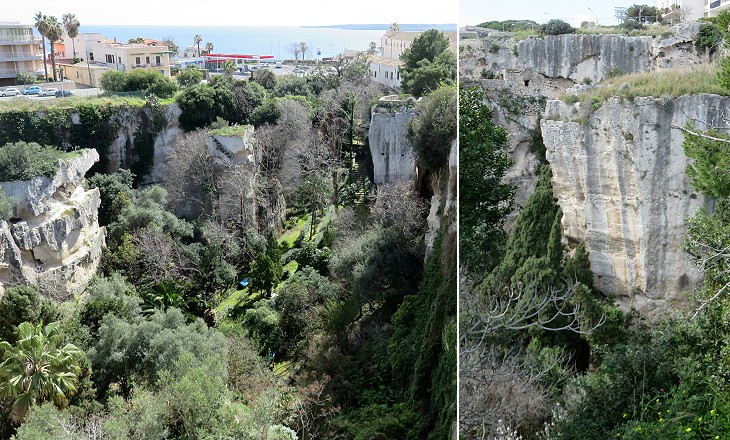 I ascended the hill to a convent of Capuchin friars, a light neat church. When a stranger walks up to this monastery he sees near him neither verdure nor tree; all appears one bare dreary rock and little does he suspect he is within reach of extensive orchards which by their produce yield a handsome income to the friars. No sight can be more singular than the gardens of this convent which are in some measure subterraneous being contained in the areas of immense excavations made by cutting stone for the ancient city. (..) Huge masses have been broken off and rolled on the platform where they contribute to the composition of a most wild yet solemn picture. The area is covered with a thick grove of trees loaded with rich scented blossoms and beautiful fruit. I was delighted with their variety of kinds, vigour of growth and brilliancy of foliage; the slim branches of the pale olive were interwoven with the bushy heads of orange, lemon, bergamot and citron trees while the tender colour of the full blown almond formed a fine contrast with the fiery buds of the pomegranate just bursting into blow.
Henry Swinburne - Travels in the Two Sicilies. 1777-1780 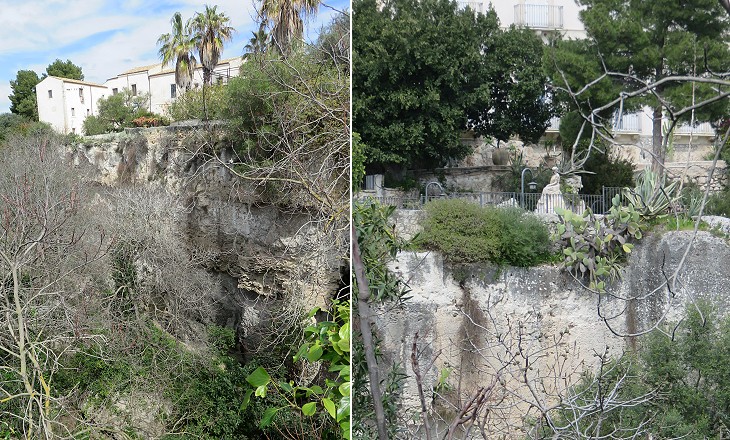 I descended by a slope into these extraordinary bowers where my view was confined on all sides by shaggy walls of great height either purposely hewn into shape or rudely figured by the corrosive sea air. Swinburne 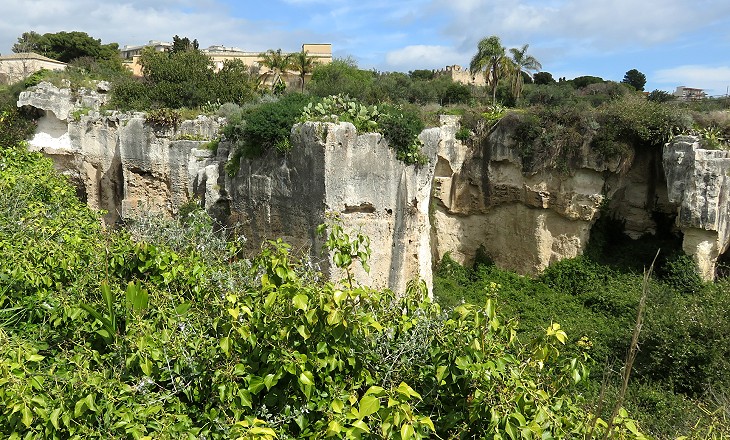 Other latomie are inside the main archaeological area. The latomie in Tiche and Acradina, the two northern neighbourhoods of Syracuse on the mainland were excavated in the late Vth century BC to use their stones for the construction of the long walls (21 km) which protected the town. 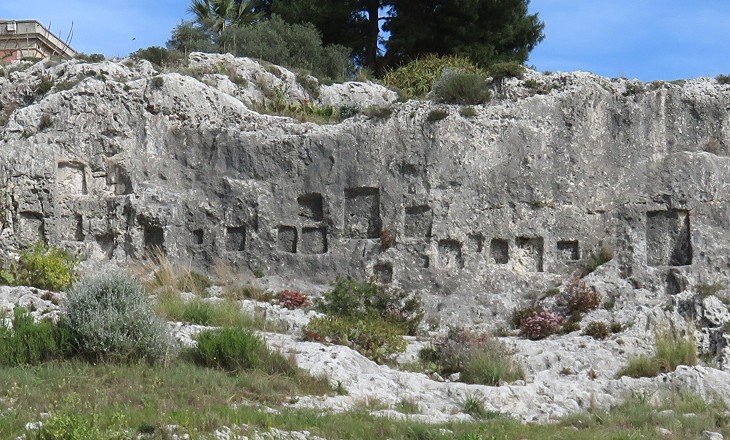 The walls of the quarries were utilized for a particular form of worship of the dead. Reliefs portraying the dead in a heroic posture were placed inside small rectangular holes which were carved into the walls. The very high number of these holes suggests that this form of worship was not reserved to the highest members of the army only. In Greek the reliefs are called pinakes hence Italian pinacoteca and German pinakothek to indicate a gallery of paintings. The wall of Necropoli Acradina does bring to mind a gallery of paintings.

Many of the pinakes were made of terracotta. Only a very limited number of them were not destroyed. Those shown above were carved in stone and are dated IIIrd century BC. In both reliefs a snake can be noticed on the ground. It brings to mind the Thracian horseman reliefs which can be seen in small altars or carved on rocks in many Greek locations. These reliefs might have influenced St. George's iconography. 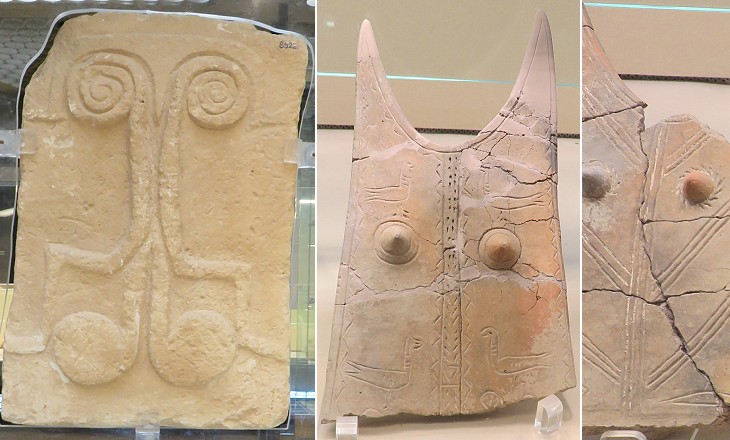 Museo Archeologico Regionale di Siracusa: (left) ceramic closure of a tomb depicting a symbolic sexual intercourse from the necropolis of Castelluccio near Noto (early bronze age 1800-1400 BC); (right) upper part of vases from Thapsos, a prehistoric site on the coast north of Syracuse (middle bronze age 1400-1270 BC)

In 1780 ancient works of art began to be collected in a museum in the Seminary premises at the initiative of the Bishop of Syracuse. In 1808 a Museo Civico was formally opened. In 1886 the Museo Archeologico di Siracusa was founded. In 1988 the collections were moved to a new building in Acradina. The museum houses some very interesting ceramic works which testify to the development of a local prehistoric civilization (Castelluccio) which eventually came into contact with the Mycenaean one (Thapsos). 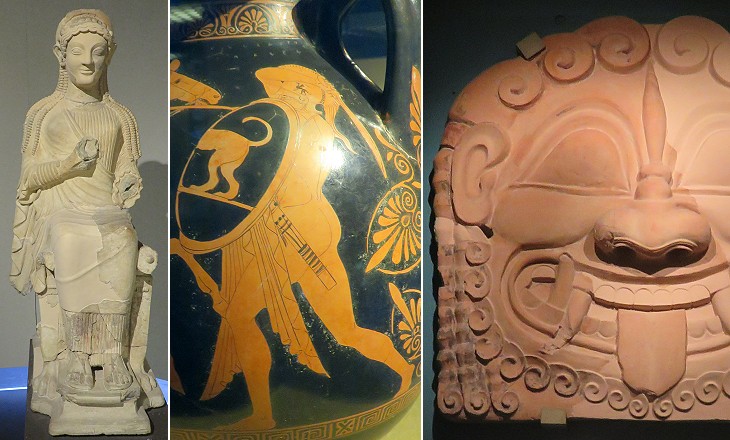 Syracuse and the nearby Greek towns imported from their homeland many works of art with which they decorated their houses and funerary monuments. Eventually these were made by local artists who imitated the Greek originals. 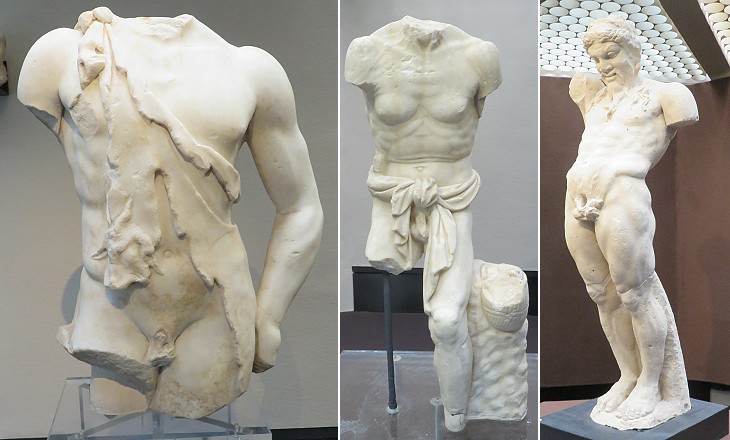 During the IVth century BC and especially after the death of Alexander the Great in 323 BC the canons of classical Greek art were abandoned for a more varied choice of subjects which did not refrain from portraying decaying or excessively muscular bodies. A number of these sculptures embellished Syracuse after it lost its independence and became the Roman capital of Sicily at the end of the Second Punic War. 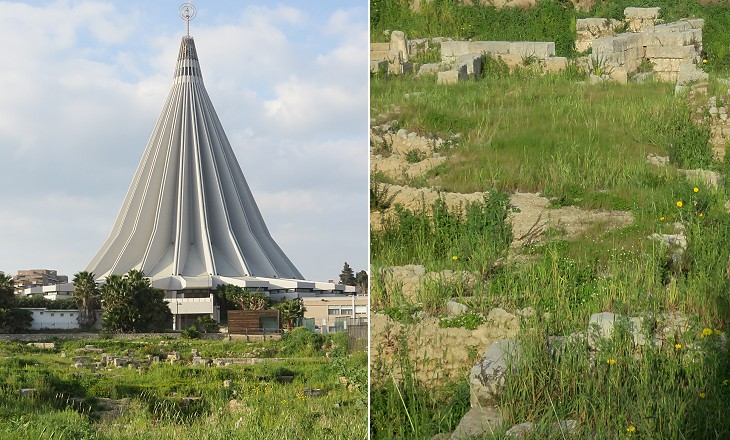 (left) Santuario della Madonna delle Lacrime, designed by Michel Andrault and Pierre Parat; (right) remains of ancient buildings which were found in the 1960s when excavating the ground for designing a large square before the new church

During the second triumvirate Sextus Pompey (son of Pompey who ruled Sicily in 42-36 BC) treated Syracuse with great rigour and when it was restored by order of Augustus the citizens were confined to the original island and the parts of Acradina that bordered upon it and the rest of the most magnificent city in the world was left to become the habitation of wild beasts and birds of the night. Such was its state when taken by the Mussulmen, it then suffered still further devastation and was reduced to Ortigia alone. Swinburne
The findings at Santuario della Madonna delle Lacrime indicated that this part of Acradina was populated until the VIth century AD. A wide street linked this neighbourhood to Neapolis where the theatre and the amphitheatre were located. 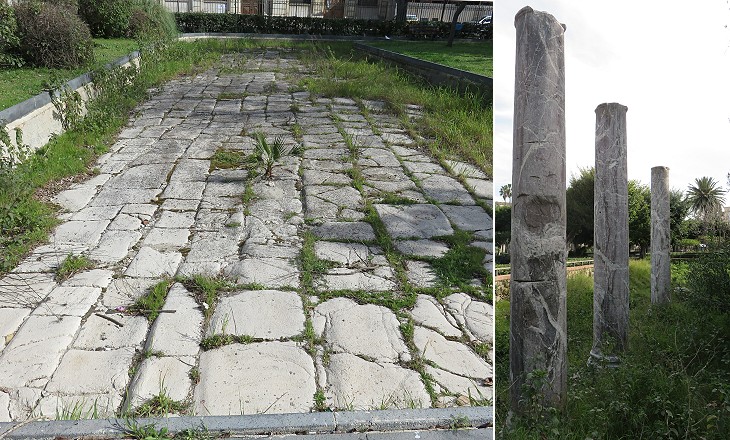 There is also another city at Syracuse, the name of which is Acradina, in which there is a very large forum, most beautiful porticoes, a highly decorated town-hall, a most spacious senate-house, and a superb temple of Jupiter Olympius; and the other districts of the city are joined together by one broad unbroken street, and divided by many cross streets, and by private houses.
Cicero - In Verrem - 2:4:119 - Translated by C. D. Yonge
The Forum of the Roman town was found in the 1910s in the section of Acradina closest to Ortigia. 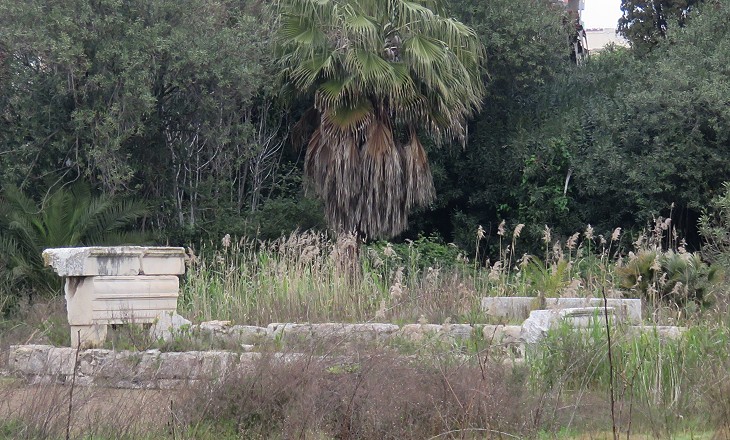 In 1864 archaeologists identified a large complex of ancient buidings between the Forum and the coastline. It included a small temple inside a large rectangular portico. It is dated Ist century AD. It was traditionally believed to be a gymnasium, but today archaeologists suggest it was a temple to Serapis. The site is difficult to be accessed because it is marshy. 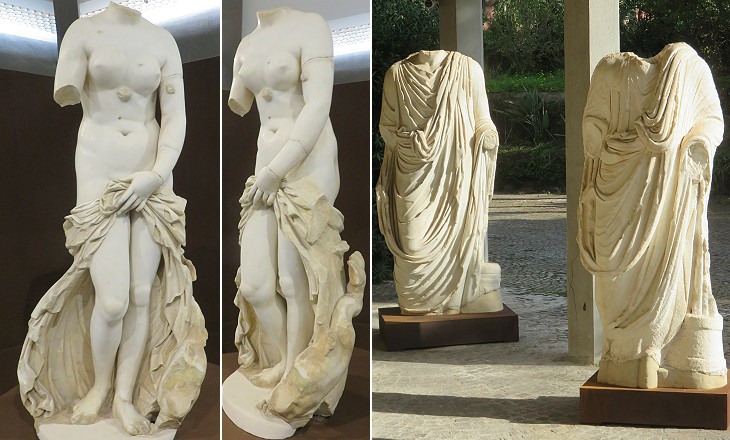 Museo Archeologico Regionale di Siracusa: (left) Venere Landolina (IInd century AD); (right) statues from the Roman Gymnasium. The image used as background for this page shows the head of a statue of Asclepius/Esculapius which was found in the Roman Gymnasium

In the Public Museum is a fragment of one of the finest Statues existing, unfortunately decapitated and likewise deprived of part of the right arm, but in other respects tolerably perfect. It displays superb Greek sculpture and in air, position, beauty of form and elegance of drapery may vie with the finest works of Praxiteles. The Seamonster resting on its Pedestal induces a belief that the Statue represented a Marine Venus.
Mariana Starke - Travels in Europe for the Use of Travellers on the Continent and likewise in the Island of Sicily - 1838 Edition - based on a travel to Sicily made in 1834.
The statue is named after Saverio Landolina Nava who found in 1804 at Acradina.