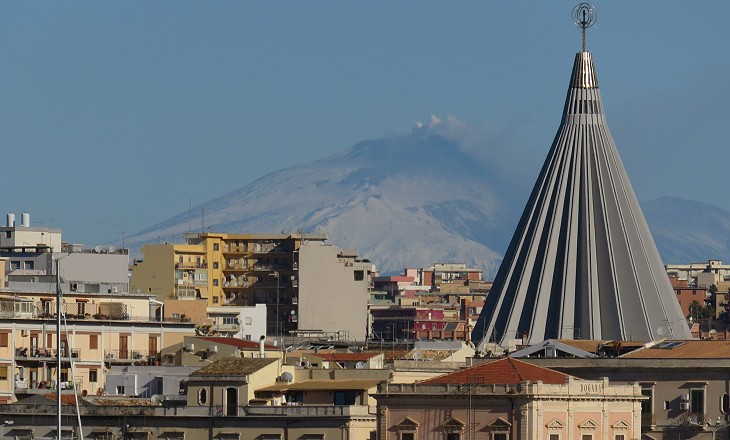 View of Mt. Etna from Ortigia and Santuario della Madonna delle Lacrime in the foreground

(May 1663) This mountain is of a very great height, and we were told by credible persons, that one might see it at Sea over the whole Island any way one came thither. We could clearly discern the top of it as far as the Island of Malta, which in a right line must needs be at least 100 miles distant.
John Ray - Observations (..) made in a journey through part of (..) Italy in 1663
Girgenti, Friday, April 27, 1787. As I sought for information on this point (the location of districts rich in corn which would justify the saying that Sicily was the granary of Rome), I was answered that, in order to see this, I ought, instead of going to Syracuse, to travel across the island, in which case I should see corn-fields in abundance. We followed this temptation, of giving up Syracuse, especially as I was well aware that of this once glorious city scarcely anything but its splendid name remained.
J. W. Goethe - Italian Journey - Translation by Charles Nisbet.
The German writer claimed in his book to have caught a glimpse of Syracuse from Taormina which is located north of Mount Etna. On a clear winter day the great volcano does dominate the whole eastern coast of Sicily where the Greeks founded their first settlements. 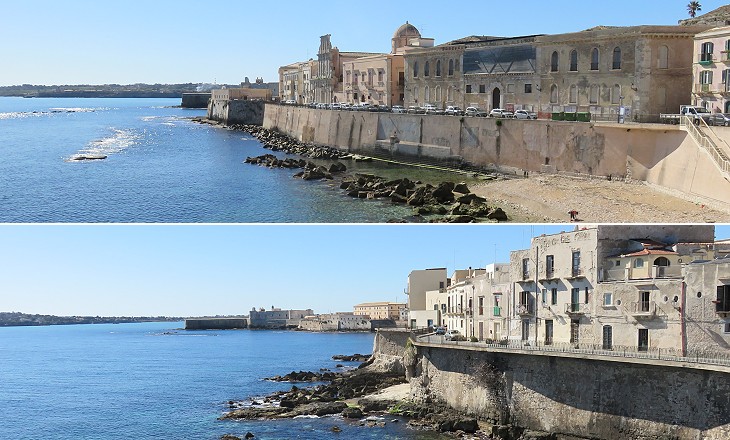 Western side of Ortigia; its aspect still retains evidence of the fortifications which protected the islet

Ortigia is a long and narrow islet very close to the mainland. It sheltered two harbours: a small one on the western side and a large one on the eastern one.
It has harbours almost enclosed within the walls, and in the sight of the whole city, harbours which have different entrances, but which meet together, and are connected at the other end. By their union a part of the town, which is called the island, being separated from the rest by a narrow arm of the sea, is again joined to and connected with the other by a bridge.
Cicero - In Verrem - 2:4:117 - Translated by C. D. Yonge
Archaeologists discovered that the Greeks from Corinth who settled in the islet in 734 BC were not the first ones to do so, because evidence of XIVth century BC huts was found near the Temple to Athena (today's Cathedral). 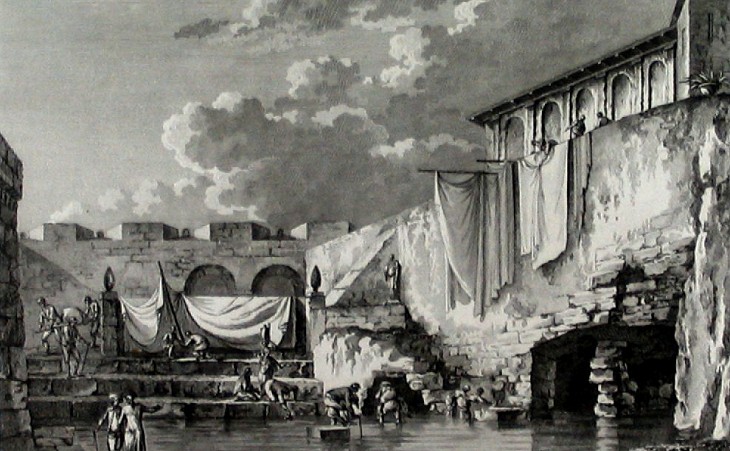 The fountain of Arethusa was dedicated to Diana, who had a magnificent temple near its banks, where great festivals were annually celebrated in honour of the goddess. We found a number of nymphs, up to the knees in the fountain, busy washing their garments, and we dreaded the fate of Actaeon and Alpheus: but if these were of Diana's train, they are by no means so coy as they were of old; and a man would hardly choose to run the risk of being changed either into a stag or a river for the best of them.
Patrick Brydone - A Tour through Sicily and Malta in 1770
Near the quay is a large pool of water defended from the sea by a wall and almost hidden by houses on every other side. The water is not salt but brackish and fit for no purpose but washing linen. This is the celebrated fountain of Arethusa whose soft poetical name is known to every reader.
Henry Swinburne - Travels in the Two Sicilies. 1777-1780
Arethusa was a nymph who was bathing in a stream near Olympia, when Alpheus, god of the river, tried to rape her. She called for help and Diana/Artemis turned her into a fresh water fountain at Ortigia. Alpheus was so fond of the nymph that he asked Zeus to allow his river to resurface at Ortigia and mingle its water with that of the fountain. 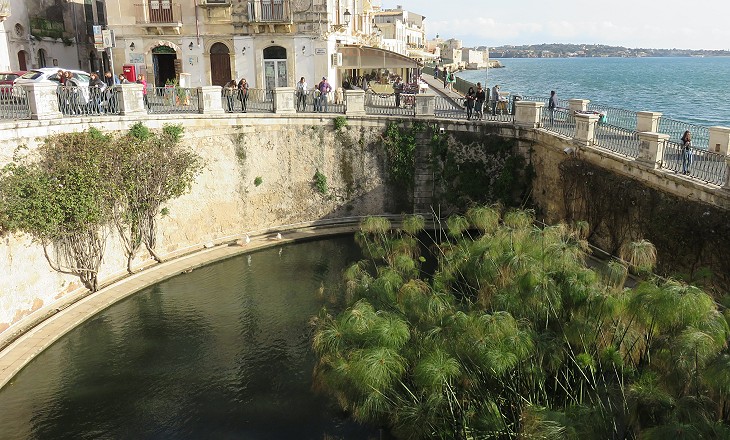 Fonte Aretusa with some papyrus plants

One of the reasons which made the Greeks settle in Ortigia was that fresh water reached the islet from the mainland via fractures in the underground layers of rock and clay. That the fresh water was a key factor in the foundation of Syracuse is corroborated by Pausanias:
I know that the god at Delphi confirms the story. For when he despatched Archias the Corinthian to found Syracuse he uttered this oracle: "An isle, Ortygia, lies on the misty ocean over against Trinacria (Sicily), where the mouth of Alpheus bubbles mingling with the springs of broad Arethusa.
Pausanias - Description of Greece - V:7:3 - Translation by W.H.S. Jones and H.A. Ormerod 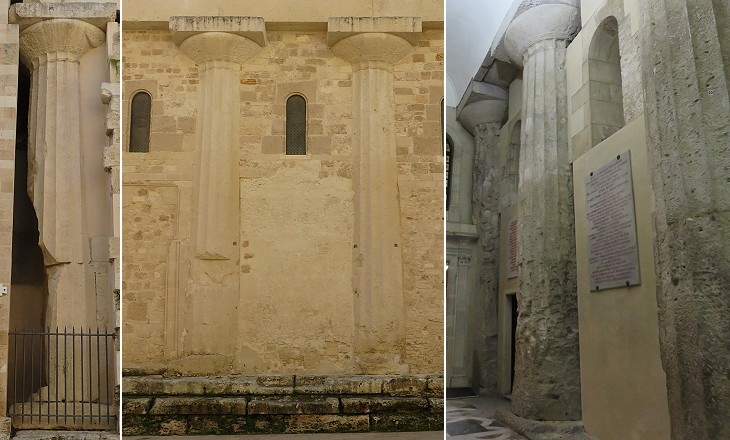 The cathedral is made out of the old building, the walls of the cella are thrown down and only as much left in pillars as is necessary to support the roof; the intercolumnations of the peristyle are walled up. This temple is built in the old Doric proportions used in the rest of Sicily; its exterior dimensions are 185 feet in length and 75 in breadth. The columns taper, have twenty flutings and measure at the base six feet five inches. Swinburne. 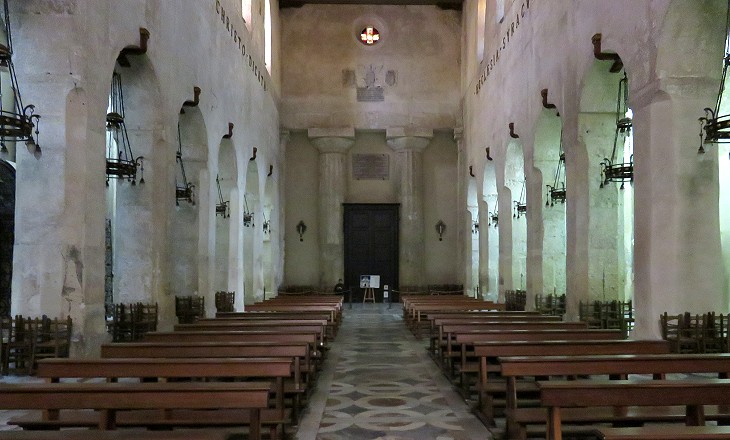 The temple was dedicated to Athena/Minerva and it was built in the Vth century BC. It stands on high ground and in the ancient times it must have had a commanding view over the sea and a large round bronze shield in the pediment because: At Syracuse, on the highest spot of the part called the Island, there is an altar (..) from which people when putting to sea carry a goblet with them, keeping it until they get to such a distance that the shield in the temple of Minerva cannot be seen; and then they let it fall into the sea, being an earthenware cup, putting into it flowers and honeycombs, and uncut frankincense, and all sorts of other spices besides.
Athenaeus of Naucratis - The Deipnosophists, or, Banquet of the Learned - Book XI - Translated by C. D. Yonge In the XVIth century imposing fortifications were built on the channel between Ortigia and the mainland. They were demolished in the second half of the XIXth century and the area was thoroughly redesigned in 1938-1942 to unearth a large group of ancient walls which in origin were a sacred area dedicated to Apollo. A temple was identified in a side position, a fact which suggests that the sacred area was larger than what we see today. (left) Remaining long side of the temple and wall of the cella; (right) two columns which retain their capital

The temple is dated VIth century BC which makes it the oldest remaining Doric temple of Sicily. The space between columns is very small and the overall design does not comply with the canons of Doric style. It was turned into a church, then into a mosque, then again into a church, all of a size smaller than that of the original cella.
Archaeologists have found evidence (a Ionic capital and part of a column) of a third temple in Ortigia. It stood near that to Athena/Minerva and it was dedicated to Artemis/Diana. 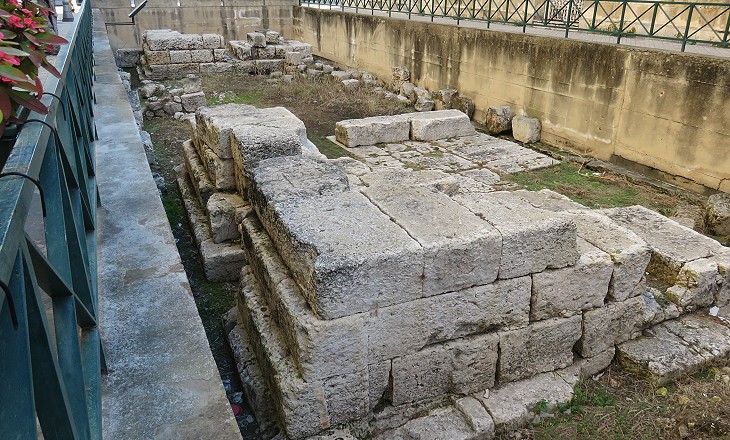 We rowed round the greatest part of its walls without seeing a human creature; those very wall that were the terror of the Roman arms; from whence Archimedes battered their fleets, and with his engines lifted up their vessels out of the sea, and dashed them against the rocks. Brydone
In 1977 chance excavations led to identifying a section of the walls built by Dionysius the Elder at the beginning of the IVth century BC, when he turned Ortigia into his own palace/fortress. He greatly strengthened the fortifications of Syracuse by building Castello Eurialo on a ridge north of the town. 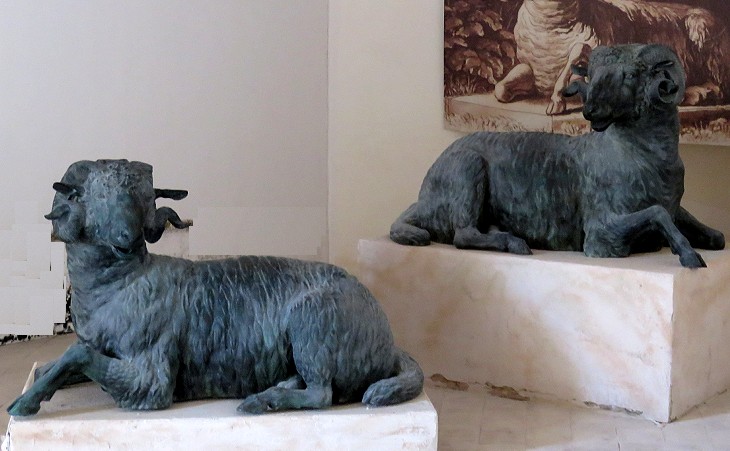 Palermo, Wednesday, April 11, 1787. My attention was chiefly occupied with two rams, in bronze, which, notwithstanding the unfavorable circumstances, highly delighted our artistic taste. They are represented in a recumbent posture, with one foot stretched out before them, with the heads (in order to form a pair) turned on different sides. Powerful forms, belonging to the mythological family, and well worthy to carry Phrixus and Helle. The wool, not short and crisp, but long and flowing, with a slight wave, and shape most true to nature, and extremely elegant - they evidently belonged to the best period of Grecian art. They are said to have stood originally in the harbour of Syracuse. Goethe
We do not know where these statues actually stood in ancient Ortigia. We know that in 1233-1240 a fortress was built at the sea end of Ortigia by Emperor Frederick II and that the statues were placed in niches at the side of the entrance. They eventually ended up in the Royal Palace of Palermo; one of the two was melted in 1848 during an uprising.

The image used as background for this page shows an ancient capital which was reutilized in the construction of Palazzo Bellomo in Ortigia.