- Selinunte - The Eastern Hill
(left) Temple to Hercules at Agrigento; (right) detail of the apse of Palermo's Cathedral

You may wish to read an introduction to this section or a page on the acropolis and the history of Selinunte first. 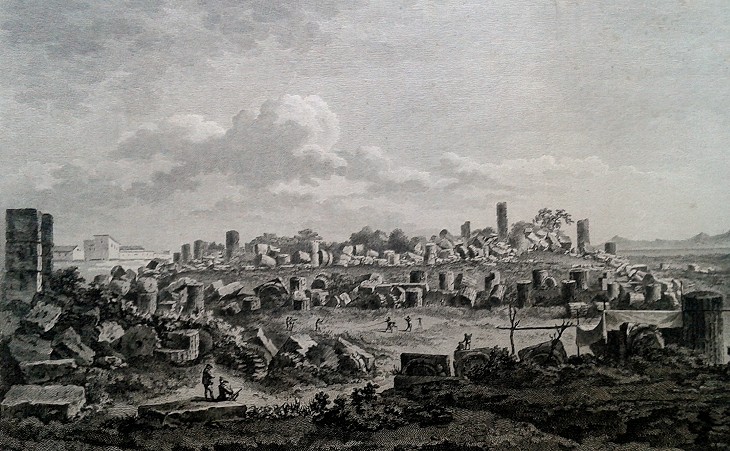 The ride to Selinuntium (eight miles from Castel Vetrano), through paths bordered with flowering shrubs, and shaded by ilexes, on approaching the sea, is most lovely; and the first view of that gigantic mass of prostrate Temples, three in number, which were the largest public edifices at Selinuntium, is so imposing that to describe the sensation they excite would be impossible.
Mariana Starke - Travels in Europe for the Use of Travellers on the Continent and likewise in the Island of Sicily - 1838 Edition - based on a travel to Sicily made in 1834.
Being acquainted with the situation of Selinunte, at the distance of many miles I descried its remains, vulgarly called the Pilieri (pilasters) del Castel Vetrano.
Sir Richard Colt Hoare - A Classical Tour through Italy and Sicily - published in 1819. 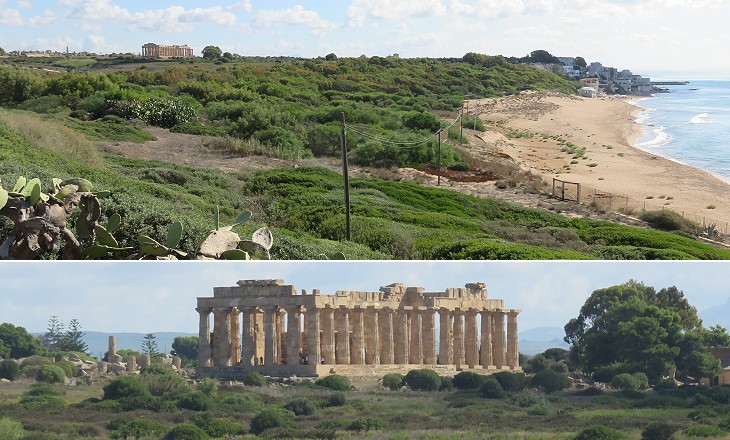 (above) Eastern hill seen from the acropolis with the former harbour of Selinunte in between; (below) enlargement showing the temples

The eastern hill, which seems not to have been within the walls, is not commanded by any other point of land, and falls with a rapid slope towards the sea, going off in much more gentle declivity on the north side; the top is a very extensive level, on which lie the shattered members of three Doric temples, thirty yards asunder, in a direct line from north to south.
Henry Swinburne - Travels in the Two Sicilies. 1777-1780
(The ruins of this hill) consist of three temples, facing east and west, all in the most dilapidated state, yet magnificent even in ruin. I was amazed on beholding these vast masses of stone, and on considering the power and knowledge necessary to raise them to the extraordinary height which the proportions of the temples required. (..) These three temples are situated on an eminence, opposite the ancient city, and in the interval between was the port, now choked up; and as there are no fragments of any other building whatever, it appears evident that they were at a considerable distance from the place itself. Colt Hoare 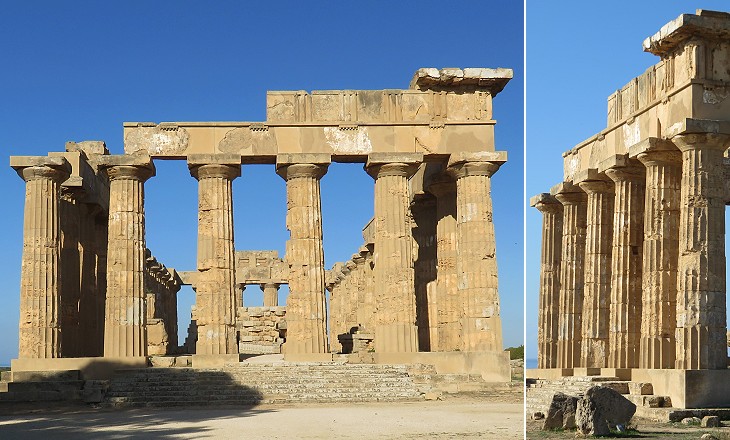 The pillars of the third temple were also fluted, and have fallen down so very entire, that the five pieces which, composed them lie almost close to each other, in the order they were placed in when upright. Swinburne
But though every part of each Edifice is disjointed, nothing seems broken: and were it possible for modern Sicily to find the means of elevating and replacing these colossal masses, the Temples to which they belong might rise again in all their pristine grandeur. Starke
In 1959 Temple E, the southernmost of the three temples and that which had collapsed in an orderly way was reassembled. It has since become the symbol of Selinunte. 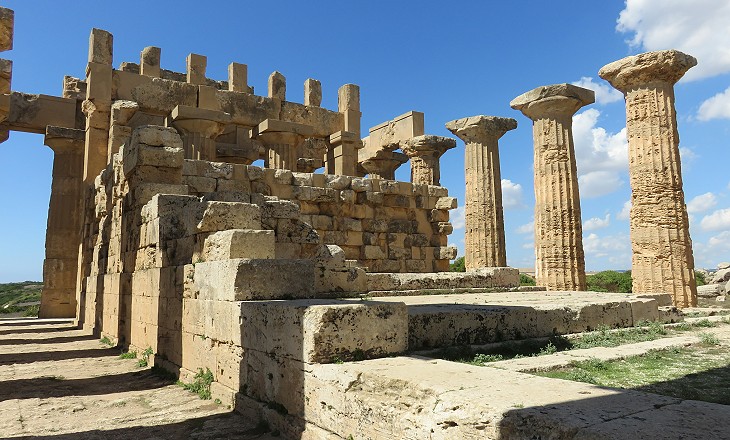 The reconstruction of the temple has identified the four elements which characterized the interior of a Doric temple. The cella with the statue of the deity (naos) faced east and it had an adyton (secret back room). It was preceded by a pronaos (portico) and followed by an opisthodomos (back portico). The presence of all four elements led to a rather elongated colonnade with 15 columns on the long sides and 6 on the fronts. 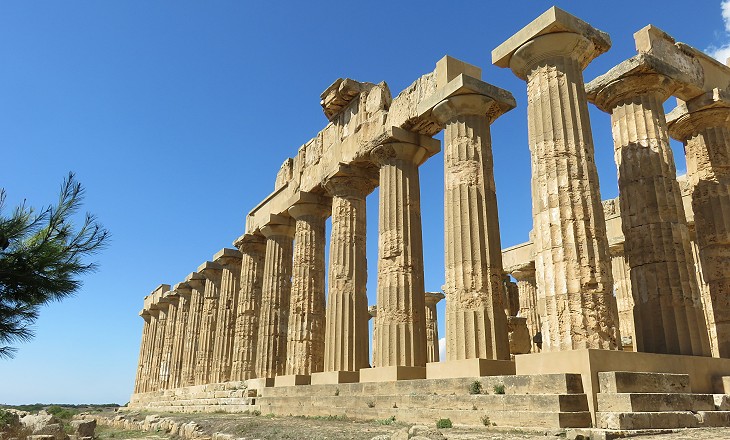 Archaeologists found out that the temple was dedicated to Hera (Juno), but it is still named by the letter which was used to identify the seven main temples of Selinunte (A, B, C and D on the acropolis and E, F and G on the eastern hill). Because of the distance between the eastern hill and the acropolis most guided tours visit only the former where the main entrance to the archaeological area is located. 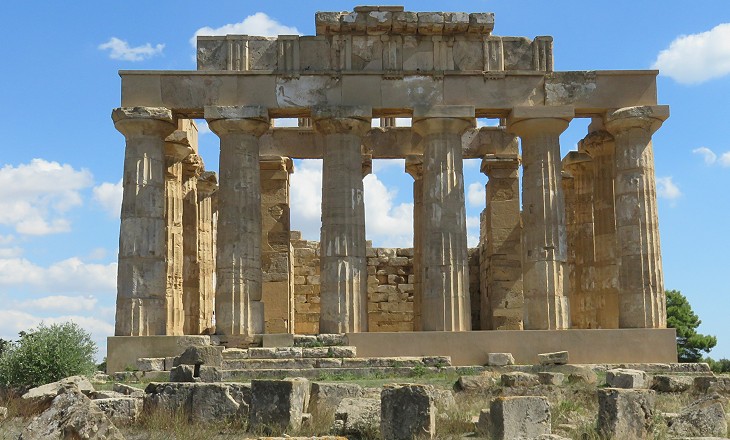 Temple E - Western front and the "opisthodomos" behind it

Toward the west are ruins of a third Temple, about two hundred and forty-two English feet in length, and about seventy-seven in breadth; its Columns were fluted, and the only part now standing of this Edifice is one Square Pilaster, probably a portion of the Cella. (..) Not far removed from one of the angles of these prostrate Temples lies the Capital of a Column easily measured, simple, like the Capitals of the Paestum Columns, and fourteen feet in diameter. These three stupendous Edifices stood equidistant from each other, commanding an extensive view of the Sea. The largest of them is evidently built in a finer style than the others; but its internal architecture cannot be justly appreciated, as the whole fabric is a mass of ruins: its decorations, however, were, superb, judging by the Bassi-rilievi discovered here, and now in the Studii at Palermo. Starke

Four metopes of Temple E were found in the early XIXth century. They were sculptured using a local stone, but marble was employed for the naked parts of the female figures. This suggests that the reliefs were painted. They depict Greek gods and heroes and perhaps there was a link among their subjects which is not understandable today because only four isolated metopes were found. 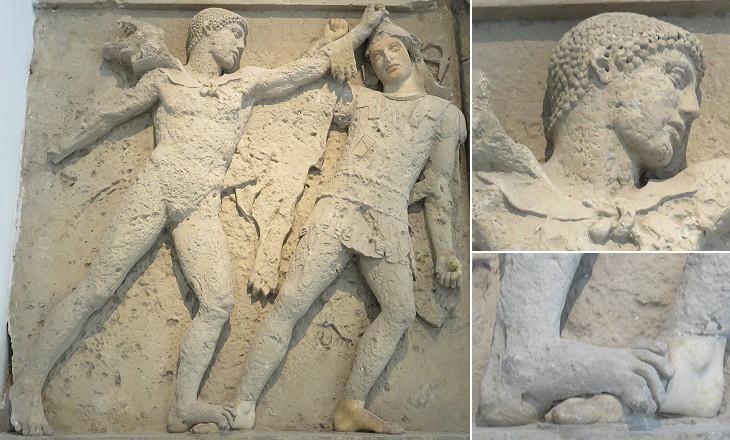 The metope portraying the fight between Heracles and an Amazon

Heracles then received a Command to bring back the girdle of Hippolyta the Amazon and so made the expedition against the Amazons. Accordingly he sailed into the Pontus, which was named by him Euxeinus, and continuing to the mouth of the Thermodon River he encamped near the city of Themiscyra, in which was situated the palace of the Amazons. And first of all he demanded of them the girdle which he had been commanded to get; but when they would pay no heed to him, he joined battle with them. Now the general mass of the Amazons were arrayed against the main body of the followers of Heracles, but the most honoured of the women were drawn up opposite Heracles himself and put up a stubborn battle. (..) And Heracles, after thus killing the most renowned of the Amazons, and forcing the remaining multitude to turn in flight, cut down the greater number of them, so that the race of them was utterly exterminated.
Diodorus Siculus - Bibliotheca Historica - Book IV - Loeb Classical Library 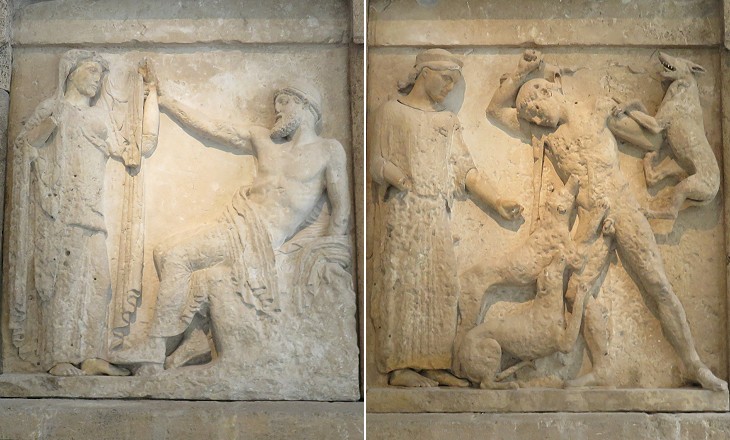 One of the metopes depicts a phase of the nuptials between Hera and Zeus. The bride shows to the groom the veil she has chosen for the ceremony. Although the scene portrays gods, it may depict actual wedding ceremonies at Selinunte of which the unveiling of the bride was the key moment.
You may wish to learn more about the myth of Artemis and Actaeon and why the latter was assaulted by his own hounds. The frequent depiction of Actaeon is due to the foreword by Ovid to the account of the hunter's death: We should always wait for a man's last day, for that time when he has paid his last debt, and we should call no man's life happy until he is dead. Metamorphoses - Book III - Translation by A. S. Kline. 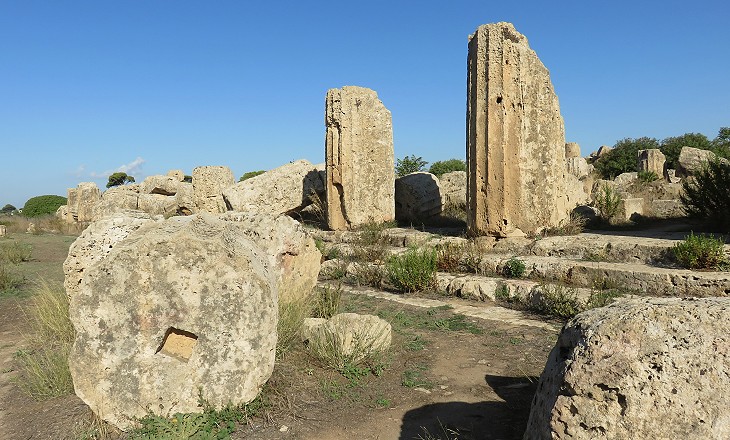 The second temple is ruined with more order, and is easily described; it had six columns in the fronts and eleven on each side, in all thirty-four; their diameter is five feet; they were all fluted, and most of them now remain standing as high as the second course of stones. Swinburne
The middle temple is the smallest, and of the same order; the columns fluted, but without bases. It appears to have been ornamented with the same number of columns as the temple of Segeste, namely, six in front, and fourteen at the sides, including those at the angles; in all thirty-six. Colt Hoare.
The latter account of Temple F was right in assessing the number of columns. It did not have an opisthodomos and it was most likely the first one to be completed. Archaeologists believe that a wall along the colonnade prevented the view of the ceremonies from the outside. 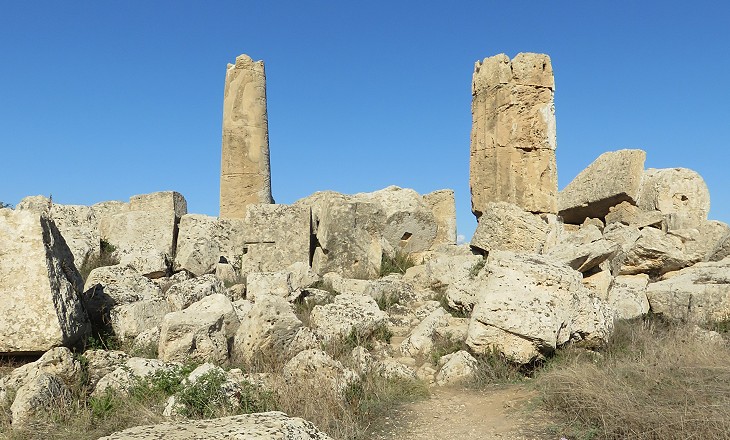 The most northerly temple exceeded the others very much in dimensions and majesty, and now composes one of the most gigantic and sublime ruins imaginable. The columns of the pronaos, which fronted the rising sun, are fluted, those that supported the sides of the temple plain; one of the former and two of the latter are still standing, though not entire; the capital and entablature are totally overturned. (..) Although these noble ruins be tumbled together in great confusion, and the means of measuring their extent be difficult, I think I may pronounce from the measures I took, that the length of the whole edifice was about three hundred and thirty feet, and its breadth thirty-nine. Swinburne
I am not architect enough to delineate the plan of these temples; such is the confusion of capitals, architraves, columns, &c. scattered on the ground. Colt Hoare 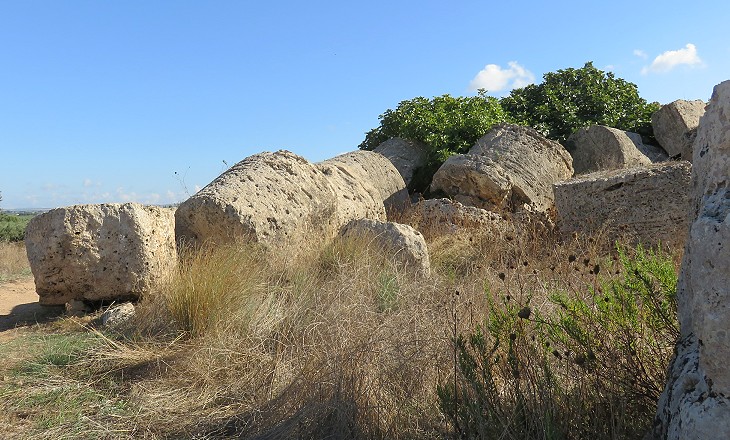 The badness of the weather prevented me from continuing my drawings, observations, and measurements; and being engaged to dine with my kind host at Castel Vetrano, I with regret took leave of these venerable and magnificent relics, which I confess gave me more pleasure than the perfect and well-preserved Temple of Segeste. For this it is easy to account. Works of architecture, as well as statuary, when executed with just proportions, lose their apparent magnitude in their symmetry and harmony, as has been felt by every one who has viewed the church of St. Peter, at Rome, and the figure of Apollo in the Vatican. Such is likewise the case with the Temple of Segeste. But amidst the ruins of Selinunte the eye wanders with astonishment over the huge masses, scattered on the ground in the wildest confusion; and the painter may find an almost inexhaustible variety of subjects to employ his pencil in these remains, which are the most gigantic and picturesque I have ever seen. Colt Hoare 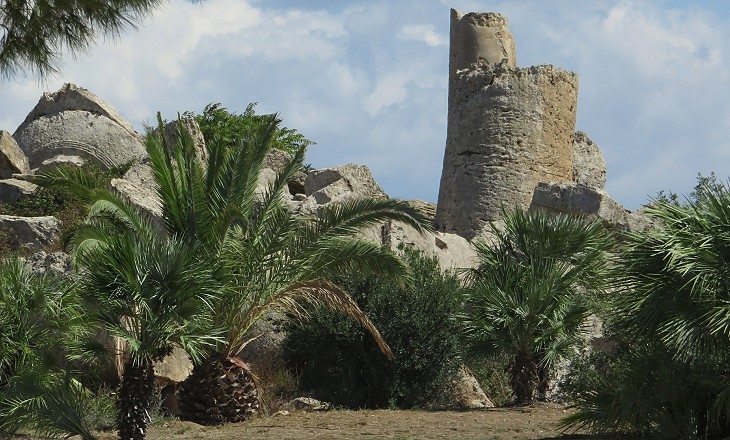 It is said that the city was destroyed by the Carthaginians, and that these proud fanes were levelled to the ground by the hand of man; but it is at least as probable that they were shaken and overthrown by an earthquake; their prodigious volume must have rendered it a difficult task to overset them, and the regularity, with which the columns of the smaller temples are thrown down argues the effect of some uniform general concussion. It is hard to attribute such devastation solely to human malice; and whoever beholds these enormous masses, scattered in heaps upon the plain, must of course accuse nature of having had some share in this victory over the pride of art. Swinburne

Museo Archeologico Regionale Antonino Salinas di Palermo: votive inscription from Temple G which was studied and translated in 1871; it is known as The Great Table of Selinus and it lists all the gods who were worshipped in the town. It says "The Selinuntines are victorious thanks to the gods Zeus, Phobos, Heracles, Apollo, Poseidon, the Tyndaridae, Athena, Demeter, Pasicrateia and other gods, but especially thanks to Zeus."

The image used as background for this page shows a relief at the Archaeological Museum of Palermo which was found at Selinunte.

Move to The Acropolis.