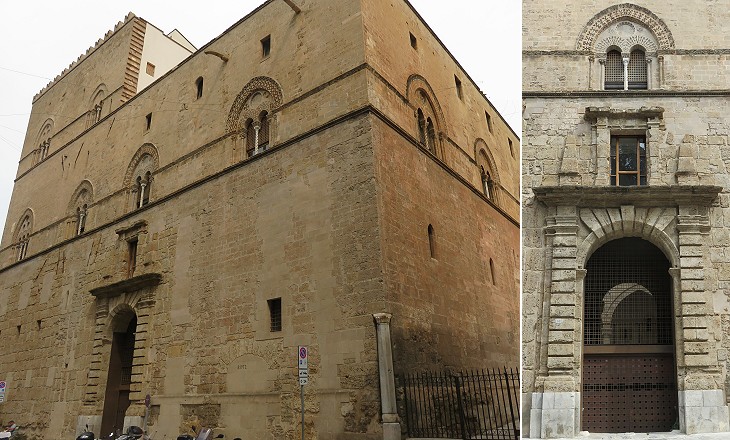 (left) Palazzo Chiaramonte Steri (1307); (right) detail of the façade with a portal and a square window which were added at a later time

On Easter Monday 1282, the Sicilian Vespers, an uprising against Charles of Anjou, King of Naples, began at Palermo and soon spread to other towns of the island. The most influential families of Sicily offered the crown of the island to Peter, King of Aragon and Count of Barcelona and to his wife Costanza, granddaughter of German Emperor Frederick II, who had been King of Sicily for more than fifty years. The Chiaramonte were one of these families and a most powerful one, at least at Palermo. They built a palace/fortress near the harbour which they called Osterio Magno, similar to a palace supposedly built by the Norman kings at Cefalù.
The Chiaramonte were hostile to the growing importance of families of Aragonese/Catalan origin in Sicilian affairs. For the whole of the XIVth century the Aragonese kings of Sicily usually chose to reside in Catania or Messina, rather than in Palermo. In 1392 the Chiaramonte took sides in a dynastic quarrel and were defeated. Andrea Chiaramonte was beheaded in front of his palace and his properties were confiscated. 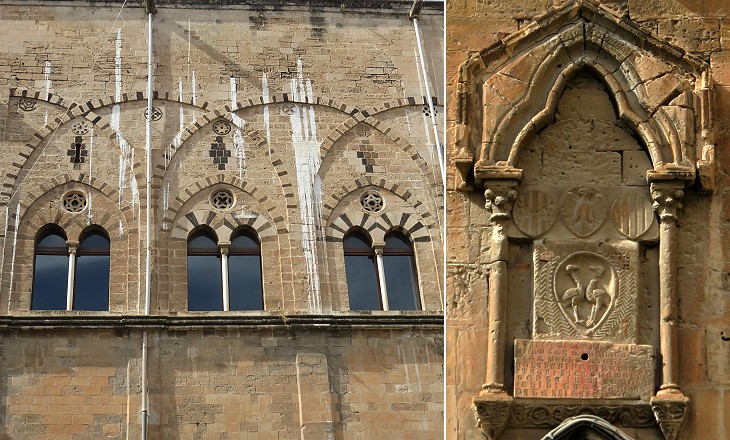 (left) Palazzo Sclafani (ca 1330); (right) Gothic frame above the entrance showing the heraldic symbol of the Sclafani (two cranes - it can be seen also at S. Agostino) and above it the coats of arms of the Aragonese Kingdom of Sicily (vertical stripes and eagles) of the City of Palermo (eagle) and of the Kingdom of Aragon (vertical stripes)

Matteo Sclafani married a Chiaramonte, but he supported the Aragonese party. It is said that he built his palace after having attended a party at that of his brother-in-law. While the Chiaramonte lived near the harbour, Matteo Sclafani built his palace in the opposite part of Palermo, near the royal one. In 1435 the building was bought by the Senate of Palermo in order to turn it into a hospital. In 1852 it was assigned to the Army to which it still belongs. Notwithstanding all these changes the façade retains interlacing arches that are typical of Norman architecture (see the apses of the Cathedral and of S. Spirito). 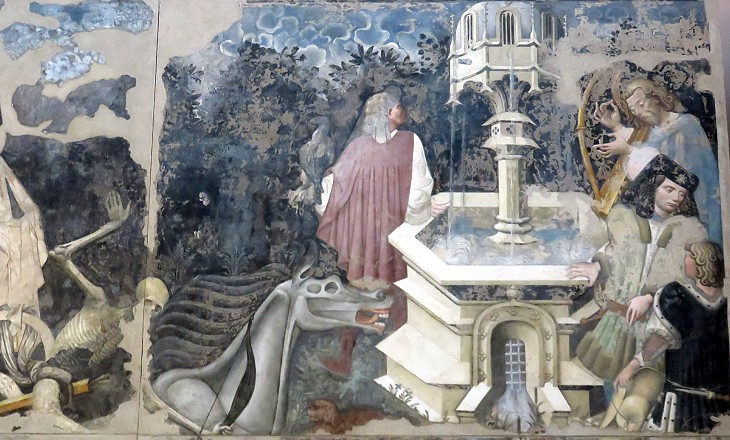 Galleria Regionale di Palazzo Abatellis: detail of a XVth century fresco from Palazzo Sclafani showing the rich who continue their life without caring for the dead; you may wish to see a similar fresco at Sacro Speco

The Court of the Spedale Grande once magnificent, but now a neglected building merits notice from containing under one of its Arcades an old Fresco painted by Antonio Crescenzio and representing the Triumph of Death; it is called Death on the Pale Horse (one of the Four Horsemen of the Apocalypse) and is taken from the Revelations Chapter VI verse 8.
Mariana Starke - Travels in Europe for the Use of Travellers on the Continent and likewise in the Island of Sicily - 1838 Edition - based on a travel to Sicily made in 1834. 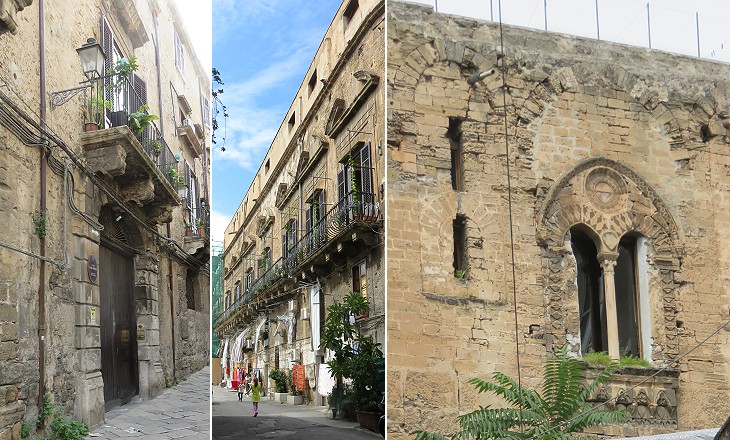 Via dei Biscottari (biscuit-makers) is a narrow street of Albergheria, one of the four historical quarters of Palermo, which slopes down from Palazzo Sclafani and follows the ancient enclosure of the Carthaginian town (you can see it in the introductory page). In the XIIth century a tower house was built upon the ancient walls and it was eventually incorporated into a larger building which was modified many times. 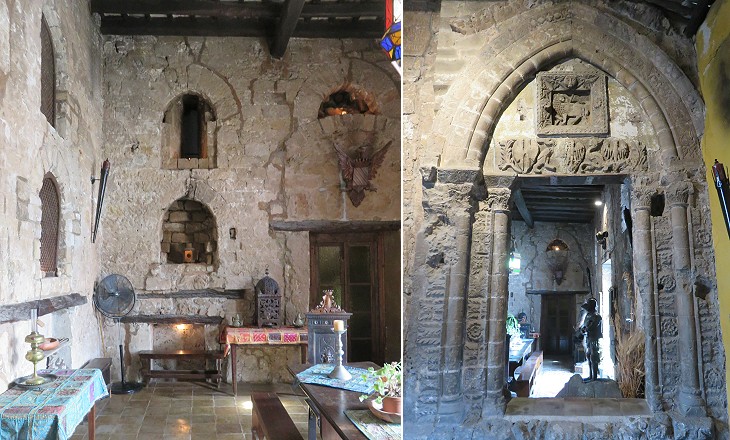 Palazzo Conte Federico: (left) interior of the tower; (right) a second window of the tower; it is now inside the building and it retains the coats of arms of the Aragonese Kingdom of Sicily (left) of the City of Palermo (centre) and of the House of Swabia (right - another eagle), that of Emperor Frederick II. The coats of arms suggest the window was decorated shortly after 1282

The palace was acquired in the XVIIth century by the Conte Federico who claim to descend from Emperor Frederick II. It has interesting XVIIIth century decorations and a fine ceramic tiled floor. The guided tour of the palace I attended in 2016 was extremely interesting because the guide was the landlord himself. 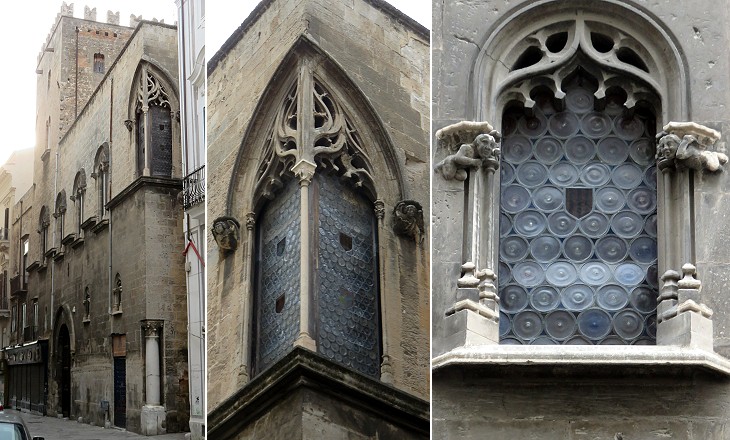 Almost all of the palaces along Il Cassaro, the main street of Palermo were designed or redesigned in the XVIIth or XVIIIth century. In order to find some older buildings it is necessary to walk along streets which similar to Via dei Biscottari were not affected by enlargements. Palazzo Alliata was built in Via Bandiera (flag) where a flag of the House of Aragon was raised after the defeat of the Chiaramonte. It was the main street of Seralcadio, a historical quarter named after Arab mercenaries who lived there in the Xth century. The palace is a very interesting example of Late Gothic style, but its interior was redesigned and redecorated after the end of the XVIIth century when it was acquired by the Pietratagliata and eventually by the Alliata who have another palace in a more prestigious location. 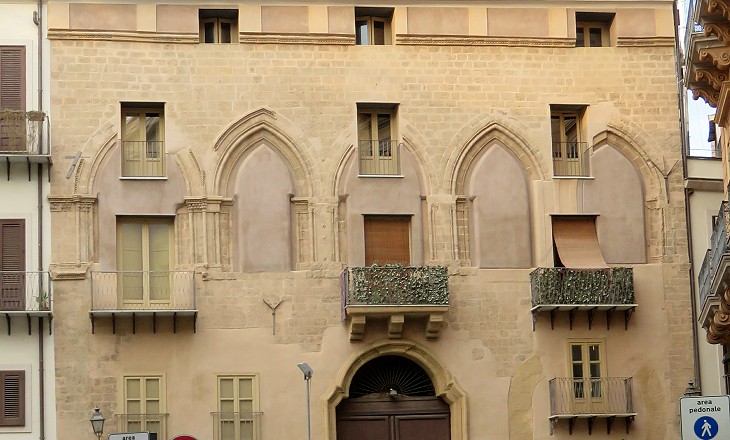 Via Monteleone is another street in the same neighbourhood as Palazzo Alliata di Pietratagliata. A recent restoration of a building which was redesigned in the late XIXth century has unearthed the Gothic windows of a small palace. They were decorated with very thin columns which are a feature of Catalan architecture (see a detail of St. Yves' Gate in the Cathedral of Barcelona - it opens in another window). 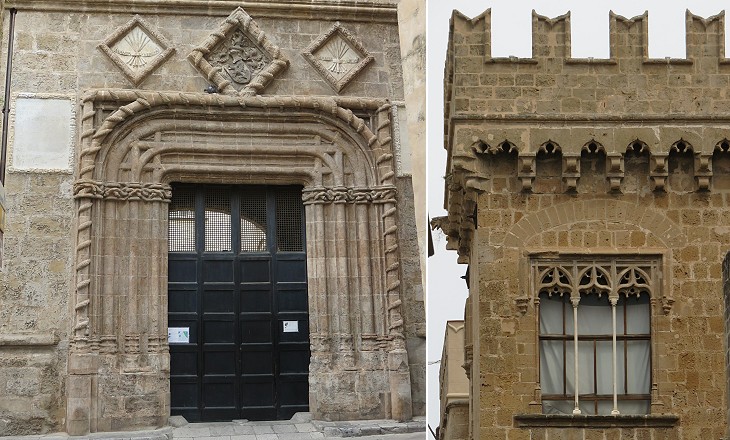 The palace was built for Francesco Abatellis, Maestro Portulano del Regno, a high rank officer who was in charge of the supervision of all activities in Sicilian harbours, in particular the trade of cereals and the payment of duties. The architect, Matteo Carnilivari, is known for having designed also Palazzo Ajutamicristo, which was greatly modified afterwards, but retains an original portal. 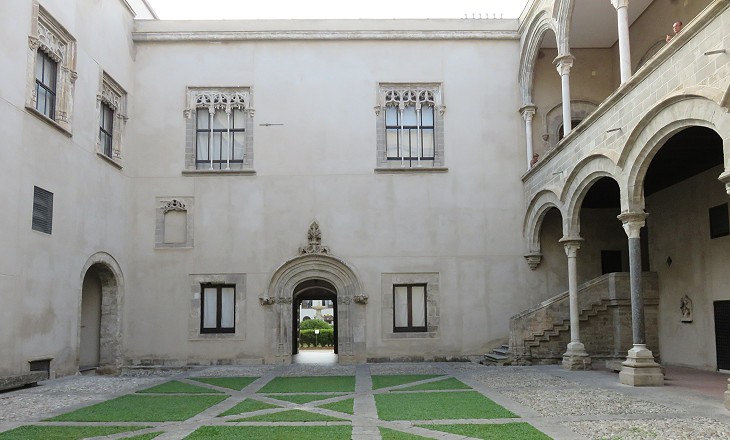 Palazzo Abatellis: courtyard; one of its windows can be seen in the image used as background for this page. Its depressed arches can be seen in other buildings at Palermo e.g. S. Maria della Catena and are more typical of Spain (see the portal of Iglesia de San Pablo at Valladolid - it opens in another window) than of Italy

In 1943 the building was damaged by Allied bombings. Its restoration priviliged the original design which had been modified when in 1526 the palace was turned into a Dominican nunnery. In 1954 Palazzo Abatellis was reopened as a museum for paintings and other non-archaeological works of art. 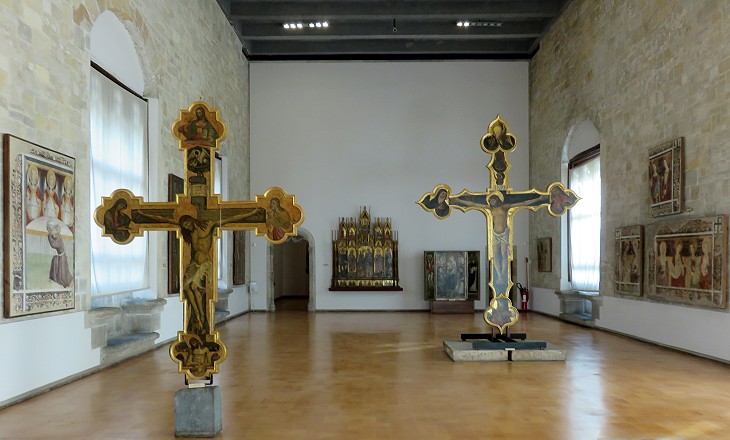 Palazzo Abatellis: Salone delle Croci, main hall on the first floor with two XVth century wooden crucifixes which were painted on both sides