View of Taormina with Mt. Etna in the background from the Greek Theatre

The seats exactly front Mount Etna, which makes a glorious appearance from this place; and no doubt has often diverted the attention of the spectators from the scene. It arises from an immense base, and mounts equally on all sides to its summit.
Patrick Brydone - A Tour through Sicily and Malta in 1770
Taormina, Monday May 7, 1787.
Sitting down at the spot where formerly sat the uppermost spectators, you confess at once that never did any audience, in any theatre, have before it such a spectacle as you there behold. On the right, and on high rocks at the side, castles tower in the air - farther on the city lies below you; and although its buildings are all of modern date, still similar ones, no doubt, stood of old on the same site. The eye sees the whole of the long ridge of Etna.
J. W. Goethe - Italian Journey - Translation by Charles Nisbet 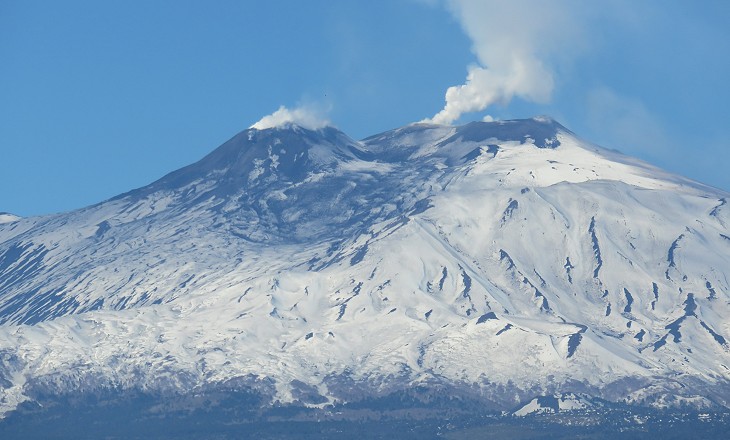 (May 1663) We rode up so high till we came to the conservatories of snow and seeing the mountain above us all covered with snow, we did not, nor indeed could we ascend any higher. The trees heerabout had at this time scarce put out their leaves. As we went up we found in one place the ground covered for a quarter of a mile broad, and 4 or 5 miles in length, with cinders, which had been thrown forth by the mountain, and was certainly the relique of a huge stream of melted coals, iron, stones and sulphure poured out in the time of the last eruption, nothing as yet growing among these stones and cinders.
John Ray - Observations (..) made in a journey through part of (..) Italy in 1663
It is just now throwing out volumes of white smoke, which do not rise in the air, but seem to roll down the sides of the mountain like a vast torrent. Brydone
The wide and extensive view is closed by the immense smoking volcano, but not horribly, for the atmosphere, with its softening effect, makes it look more distant, and milder than it really is. Goethe 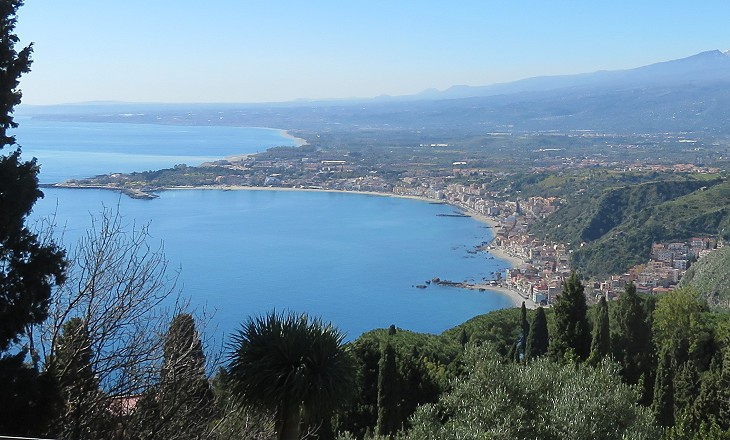 The eye (..) catches a view of the sea-shore, as far as Catania, and even Syracuse. Goethe
In origin Taormina was a town of the Siculi, one of the ethnic groups which the Greeks found in Sicily when they established their colonies on the eastern and southern coast of the island. In 735 BC settlers from Chalkis founded Naxos on a peninsula which sheltered a natural harbour at the foot of the town. In 405 BC Naxos was seized and razed to the ground by Dionysius I, tyrant of Syracuse. The inhabitants who managed to escape sought refuge in Taormina where they mingled with the Siculi. Eventually the Greek element prevailed; the town utilized the port of ancient Naxos. In 241 BC, at the end of the First Punic War, it was a possession of Syracuse. 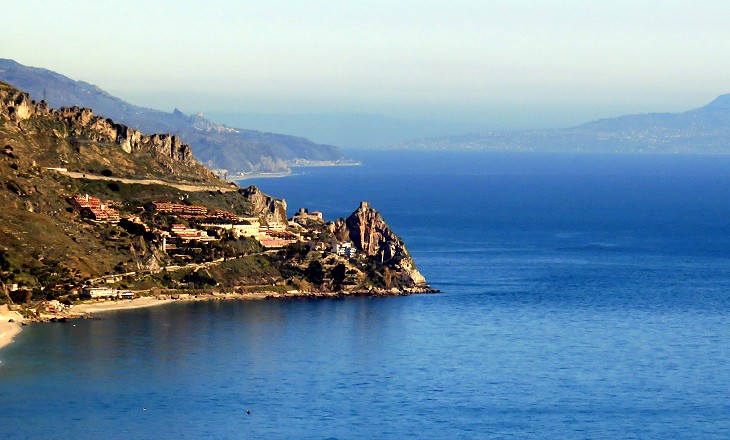 If now you turn from this view towards the passage running at the back of the spectators, you have on the left the whole wall of the rocks between which and the sea runs the road to Messina. And then again you behold vast groups of rocky ridges in the sea itself, with the coast of Calabria in the far distance, which only a fixed and attentive gaze can distinguish from the clouds which rise rapidly from it. Goethe
Taormina was a port of call in the maritime route between Greece and its Sicilian colonies along the coast of the Italian peninsula. It was well placed also for the ships which from Syracuse headed northwards across the Strait of Messina. In August 1860 Giuseppe Garibaldi, after having conquered Sicily, sailed with his troops towards Calabria from Naxos. When you have ascended to the top of the wall of rocks, which rise precipitously at no great distance from the sea, you find two peaks, connected by a semicircle. Whatever shape this may have had originally from Nature has been helped by the hand of man, which has formed out of it an amphitheatre for spectators. Walls and other buildings have furnished the necessary passages and rooms. Right across, at the foot of the semicircular range of seats, the scene was built, and by this means the two rocks were joined together, and a most enormous work of nature and art combined. Goethe View of the seating section

The theatre, I think, is accounted the largest in the world. (..) It is entire enough, to give a very tolerable idea of the Roman theatre, and indeed astonishes by its vastness; nor can I conceive how any voice would extend through the prodigious number of people it must have contained. I paced about one quarter of it, over the boxes that were intended for the women, which is not near the outward circle of all; the rest is so broken, that I could get no farther. It measured about 120 ordinary steps, so that you may conceive the greatness of the whole. Brydone 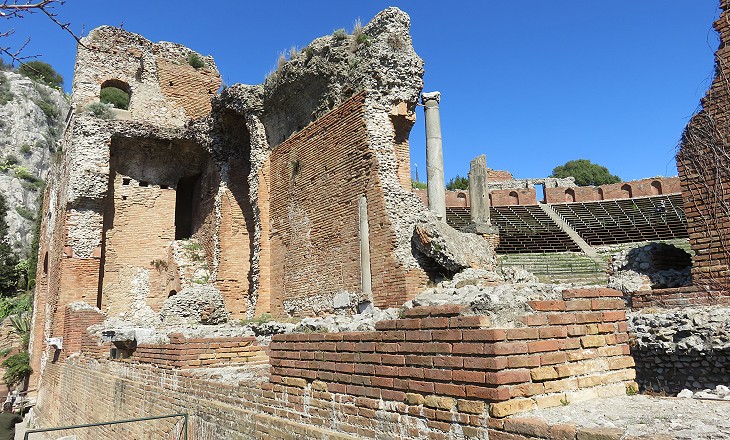 Wall behind the stage of the theatre

The arcades are all composed of brick, the rest of the walls of pebbles, and covered with marble casings; none of the seats exist in perfect preservation, though many rows of them were cut out of the live rock; time has consumed even the rock. The whole range of the vomitoria and galleries that encircled the seats is yet standing as high from the ground as the bottom of the second order; the proscenium which formed the chord of the arch is almost entire; it is a thick wall with a large opening in the centre and three niches (..) between each of these apertures or recesses, are marks in the wall, where columns were placed.
Henry Swinburne - Travels in the Two Sicilies. 1777-1780
In 212 BC the Romans sieged and conquered Syracuse, thus Taormina became part of the Roman province of Sicilia. The theatre is traditionally known as the Greek Theatre, but its current aspect is mainly the result of IInd century AD restorations and enlargements. The sections of the walls which Swinburne says were made of pebbles are actually an example of opus caementicium, a Roman construction technique which kept the pebbles together by using pozzolana, a very effective mortar.
You may wish to see the theatres of Orange and Aspendos which retain the entire wall behind the stage. 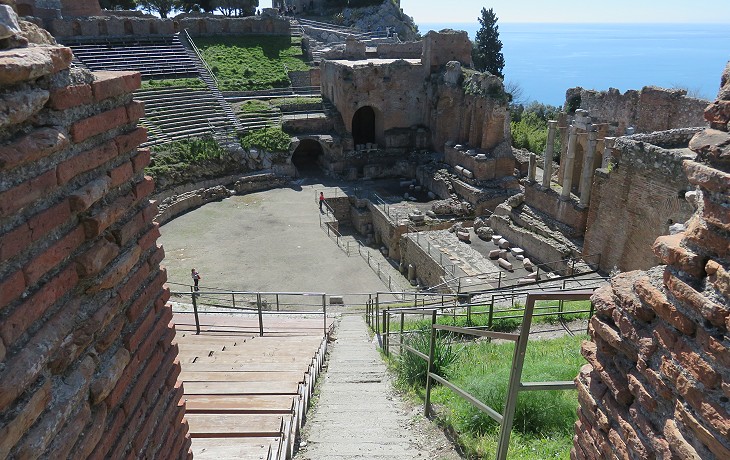 View from the highest seats

We descended towards the theatre, and stayed for a while among its ruins, on which an accomplished architect would do well to employ, at least on paper, his talent of restoration. Goethe
In the 1860s some ancient columns were erected on the wall behind the stage and the theatre was cleared of the rubble which made it difficult to move about. In the 1950s wood benches were placed in parts of the seating section so that the building could house music and ballet performances in summer (you may wish to see a view of the theatre during a piano concert - it opens in another window). 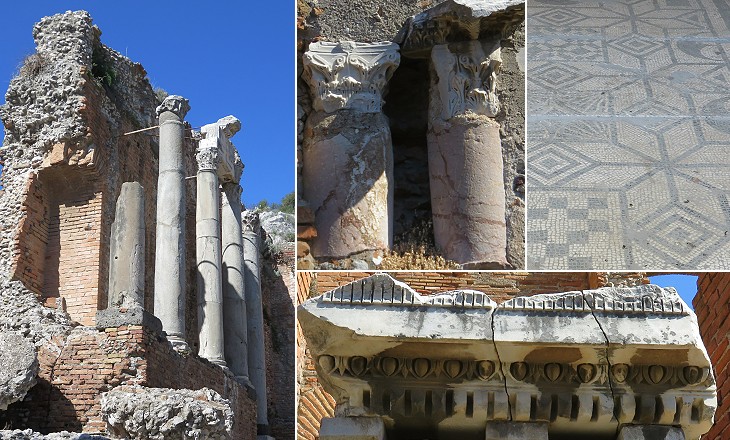 Decorative elements of the theatre

During the Late Empire the theatre was modified in order to stage gladiatorial combats and venationes (fights with wild animals). During the early Vth century these shows were forbidden; this decision and the occupation of Sicily by the Vandals in 440 most likely led to the abandonment of the theatre. Unlike other similar monuments of the past (e.g. Colosseo, Theatre of Bosra) it was not turned into a fortress, perhaps because its size was too large for the military importance of the medieval town. 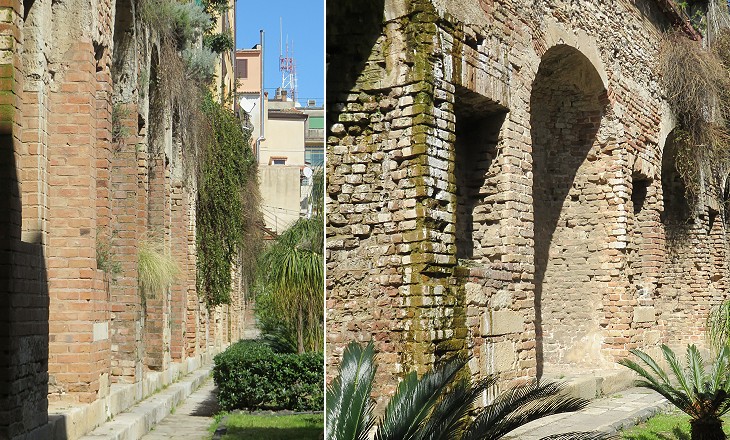 After admiring the great theatre, we went to examine the Naumachia, and the reservoirs for supplying it with water. About 150 paces of one side of the wall of the Naumachia remains; but as this is not complete, there is no judging of its original magnitude. This is supposed to have been a huge square, enclosed with strong walls, and capable of being filled with water on occasion; intended for the exhibition of sea-fights, and all naval exercises. There were four reservoirs for supplying this with water. All are upon the same grand scale. Brydone
Today archaeologists doubt that this great wall was part of a pool for sea-fights. Its alternate rectangular or curved niches most likely housed statues of a nymphaeum, a monumental fountain. 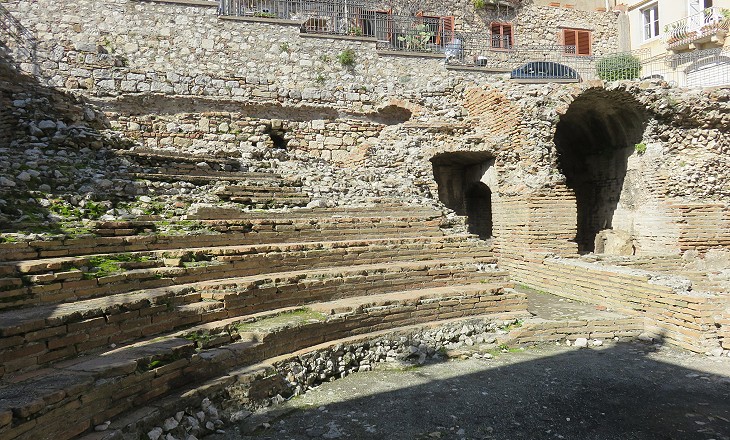 In 1893 the site of an odeon (a small covered theatre for music and poetry) was identified behind (and below) S. Caterina della Ruota, a XVIIth century church not far from the theatre. It was most likely built in the IInd century AD. In 1964 evidence of the heating system of three calidaria (hot rooms) was found during the construction of new buildings. The whole bath establishment is estimated to have covered an area of 1,000 square meters (10,700 square feet). Also this building is in the proximity of the theatre.
The Tauromenitanum, a wine of Sicily, enjoys a high repute. Pliny the Elder - Natural History - Book XIV
Roman writers, including Pliny, described Taormina as a minor town, but because its wine was highly appreciated its inhabitants could afford to build all the usual facilities of a larger community, including a 14-mile-long aqueduct. 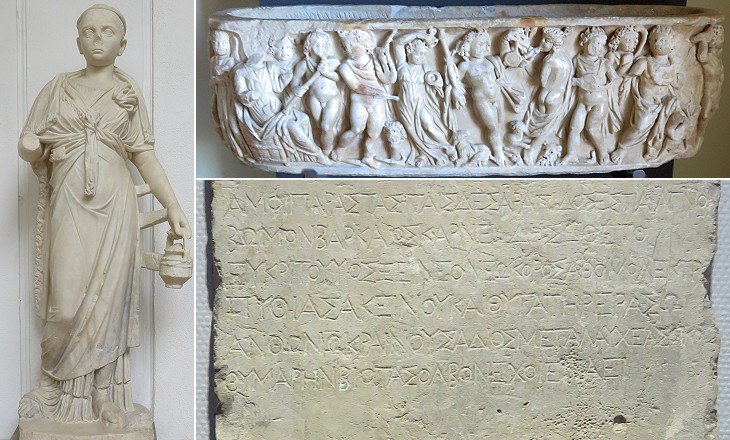 Works of art found at Taormina: (left) Archaeological Museum of Palermo: statue of a priestess of Isis; (right) Collection of antiquities at the Greek Theatre: (above) small sarcophagus with a relief depicting a Dionysiac scene; (below) Greek inscription celebrating the construction of an altar in a temple to Serapis. The image used as background for this page shows the head of a statue at the Greek Theatre

Religion has not left a significant mark on the monuments of ancient Taormina. Archaeologists have found minor evidence of a temple near the Odeon and because of inscriptions and statues they believe that a temple to Serapis and Isis stood in the northern part of the town outside Porta Messina. 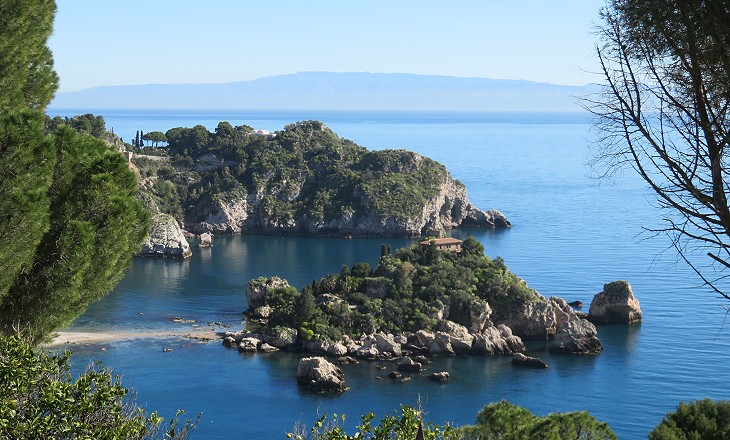 Below Taormina: on the Sea-shore, Tuesday, May 8, 1787.
At first I wished to ascend the height of the town; but then I was tempted to remain here; I sought a corner like the bird about to build its nest. In a sorry and neglected peasant's garden I have seated myself, on the trunk of an orange-tree, and lost myself in reveries. (..) It must not be left unrecorded, that on this shore, and beneath the clearest sky, we looked around us, from a little balcony, and saw roses, and heard the nightingales. These we are told sing here during at least six months of the twelve. Goethe
Were I to name a place that possesses every grand and beauteous qualification for the forming of a picture; a place on which I should wish to employ the powers of a Salvator (Rosa) or a Poussin; Taormina should be the object of my choice. Every thing belonging to it is drawn in a large sublime style; the mountains tower to the very clouds, the castles and ruins rise on mighty masses of perpendicular rock, and seem to defy the attacks of mortal enemies. Aetna with all its snowy and woody sweeps fills half the horizon; the sea is stretched out upon an immense scale and occupies the remainder of the prospect. Swinburne