- Medieval Syracuse
(left) Temple to Hercules at Agrigento; (right) detail of the apse of Palermo's Cathedral 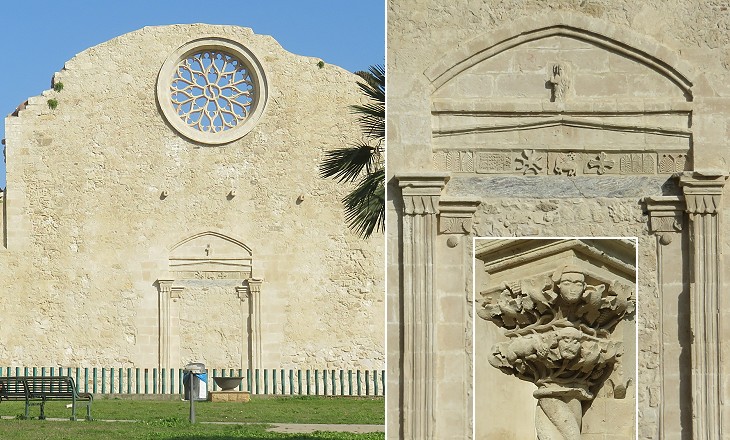 During the Byzantine rule Syracuse was the capital of a thema (province) which included not only Sicily, but also some territories along the coast of southern Italy. In 663 Emperor Constans II relocated the imperial court to Syracuse, but at his death in 668 his son, who had not followed him, decided to continue to rule from Constantinople. We know that in 878, at the time of the Arab conquest, the town had many churches, but of these and of the mosques which replaced them little evidence is left. The Norman kings set their residence in Palermo and Syracuse lost most of its past importance. In 1093 the diocese of Syracuse was restored and in the following period a number of churches were built. S. Giovanni Evangelista stood on the site where St. Marcian, first bishop of the town, was buried. In 1693 it collapsed because of the earthquake which struck Syracuse and razed nearby Noto to the ground.

We rode to St John's Church a little way out of town supposed the oldest in the world and where St Paul preached. Under it is a chapel with several fresco paintings on the walls but nearly destroyed by damp and time; (..) close to this is the entrance to the famous catacombs of Syracuse. I went all through them and confess I was much disappointed, very inferior to those of Naples.
Sir George Cockburn - A Voyage to Cadiz and Gibraltar: up the Mediterranean to Sicily and Malta in 1810/11.
This very fine sarcophagus was found in 1872 during excavations in the catacombs of S. Giovanni. It is dated ca 350; it is very similar to sarcophagi which were found in Rome and Arles. It is decorated with scenes of the Old and of the New Testament. The small inscription on the lid states it was made for Adelfia by her husband Valerius, a comes, i.e. an official of the Late Roman Empire. Because the central medallion portrays a couple and the size of the lid does not perfectly match that of the box it has been suggested that the lid and the box had a separate origin and were pieced together by a comes Valerius to whom St. Augustine dedicated one of his treatises in 419. You may wish to see a page on the manufacturing of sarcophagi in the Roman Empire and a list of sarcophagi which are shown in this website. 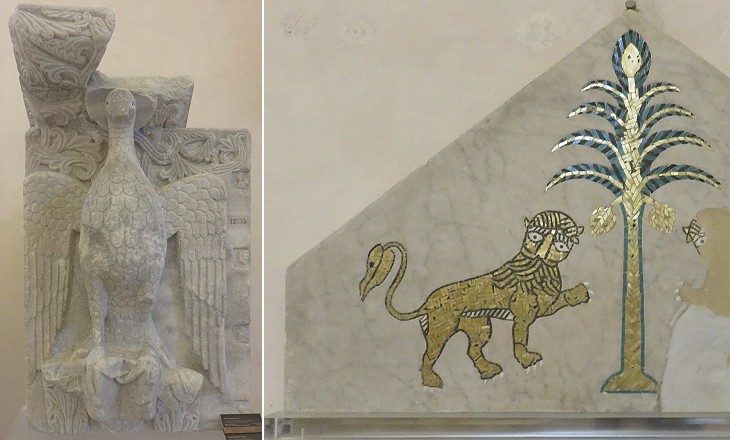 The church is located outside Ortigia, in an area which was almost unpopulated until the late XIXth century. After the 1693 earthquake a small church was nested inside the old building. Some of its Norman decorative elements can now be seen in a museum housing works of art which were made after the Greek and Roman tenure of the town.

Galleria Regionale di Palazzo Bellomo: baptismal font from the Cathedral; the image used as background for this page shows a fragment of Cosmati decoration in the Cathedral

The Cathedral of Syracuse was built on the site of a Temple to Athena. It was damaged by the 1693 earthquake and the decoration of its interior was modified many times. Its baptismal font was most likely made in Constantinople, perhaps before the Norman conquest of Syracuse (see some examples of medieval low reliefs in Constantinople). 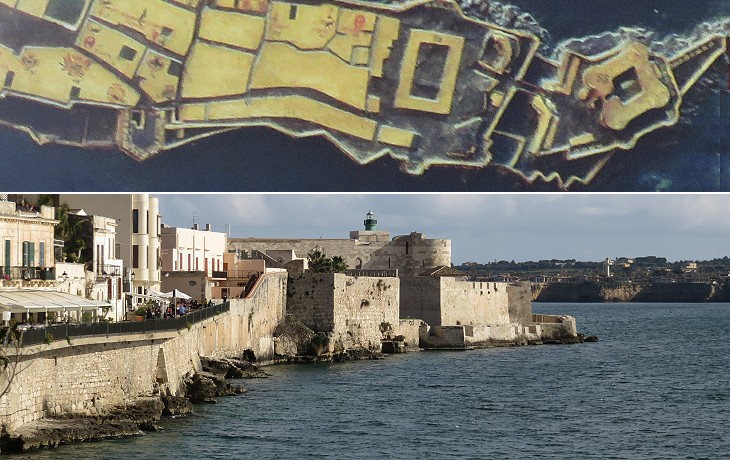 Castello Maniace: (above) plan of the fortifications; (below) the castle seen from Fonte Aretusa; in the background the lighthouse of Punta Castelluccio at the other end of Porto Grande, a large natural harbour south-east of Ortigia

This fortress commands a good view of the entrance to the great port.
Sir Richard Colt Hoare - A Classical Tour through Italy and Sicily - published in 1819.
On my return to Syracuse I went to the Castle or Citadel which was built by the Emperor Charles the Fifth or rather repaired by him. The view of the town and port and surrounding country from the top of this Castle will reward any one for the trouble of going up. Cockburn
The small fortress at the southern end of Ortigia is named after George Maniakes, a Byzantine general who in 1040 conquered Syracuse and parts of eastern Sicily, including Messina and Taormina. In 1043 the Arabs managed to restore their rule, but Maniakes' expedition showed that they were disunited and were not supported by the Muslim rulers of Tunisia. The Byzantine general enrolled 300 Norman knights in his army. They were led by a member of the Hauteville (Altavilla) family. Eventually the Normans successfully conquered the island on their own and the Altavilla became counts (1071) and then kings (1140) of Sicily. 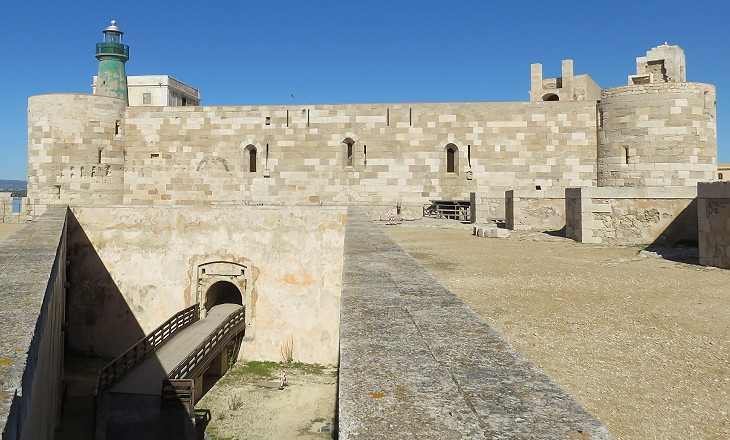 The Byzantine fortification was replaced by a square castle which was built in 1238-1240 by order of Frederick II of the House of Swabia, German Emperor and King of Sicily. Its design is very similar to the Swabian fortress of Milazzo. The current aspect of the castle does not show its age because in 1702 the explosion of a gunpowder magazine almost destroyed it. It was utilized by the Italian Army until the end of the XXth century. 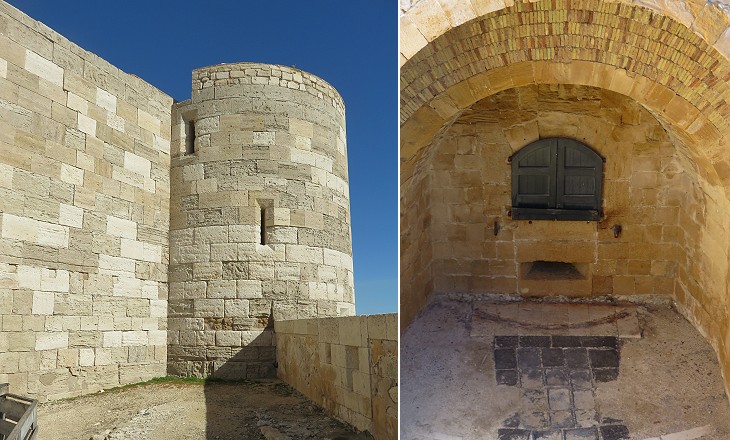 Castello Maniace: (left) one of the towers; (right) cannon platform

In 1545, as stated by an inscription at the entrance to the castle, when fears of an Ottoman invasion of Sicily run very high, the Swabian fortress, similar to that at Milazzo, was surrounded by state-of-the-art bastions from which Spanish cannon could fire at the enemy fleet. In a way these weapons replaced the war machines which Archimedes devised to destroy the Roman ships in 212 BC.
In 1565 the Ottomans invaded Malta as a preparatory step towards an invasion of Sicily. At that time the island did not have the imposing fortifications of Valletta for which it is known, and the Knights of St. John had to rely on those of Borgo and Isola (Senglea). They managed to resist until García Álvarez de Toledo y Osorio, Viceroy of Sicily, sailed from Syracuse with a large army and, after having safely landed on the northern part of the island, forced the Ottomans to lift the siege. 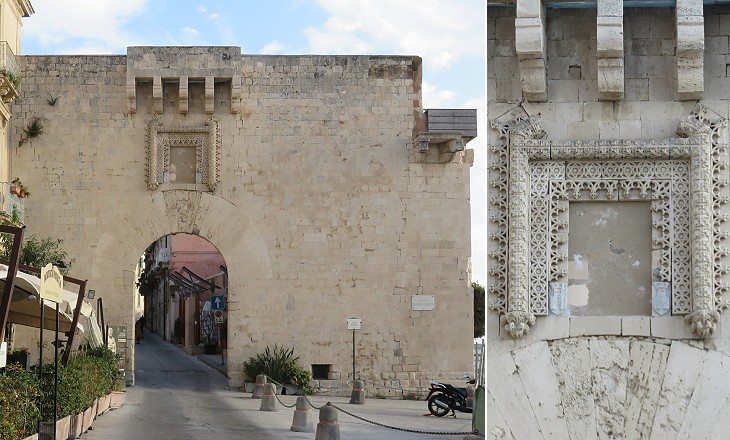 The northern end of Ortigia was fortified with walls since the foundation of the town and parts of an enclosure of the IVth century BC were identified in 1977, not far from Porta Marina. The gate was built in the XVth century by the Aragonese kings of Sicily and it is embellished by a very elaborate frame. It might have contained a coat of arms similar to that at Porta Catania in Taormina. The gate was the access to the town from the harbour, not from the mainland, as the latter was protected by other Spanish fortifications. 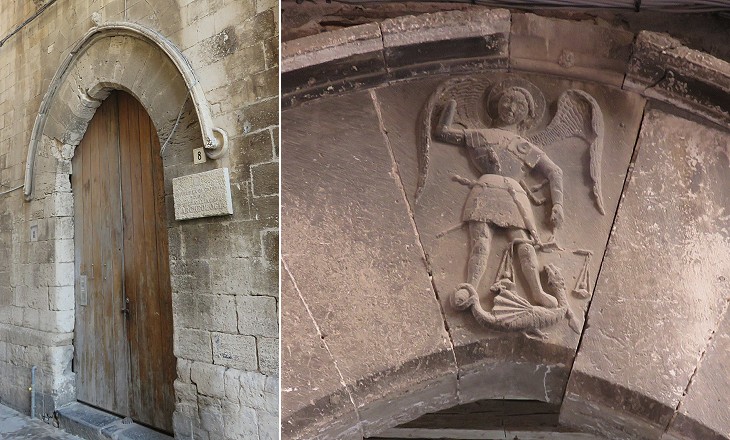 The 1693 earthquake caused great damage, but a number of buildings withstood its effects and retained their original aspect, at least in part. The portal of Palazzo Francica Nava is dated XIVth century and it shows the influence of Catalan architecture. The use of very thin arches and mouldings is typical of Barcelona (see a detail of St. Yves' Gate in the Cathedral of that city - it opens in another window).
Camera Reginale (of the Queen) was an unusual institution founded in 1305 to provide the Queens of Sicily with an independent revenue. It was responsible for the administration of a number of royal fiefdoms. It had its headquarters in Syracuse and it was run by a bureaucracy of lawyers, accountants, agricultural experts and the likes with a positive effect on the economy and social structure of the town. It was abolished in 1536. 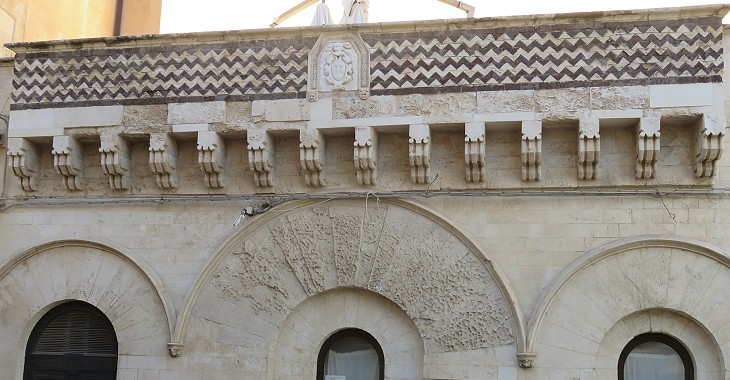 This small palace shows Gothic Catalan windows, but the balcony has a more Sicilian decoration which is based on the use of black volcanic stone and white marble. It is often seen in Taormina, very near Mount Etna, but also in Messina and Palermo. 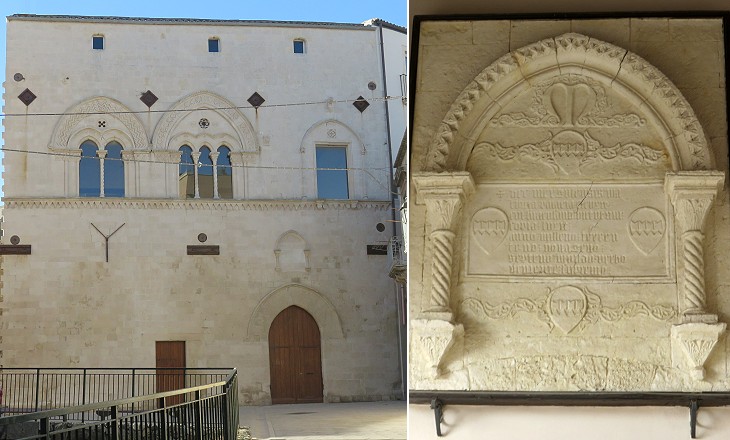 Medieval quarter: (left) Palazzo Mergulese Montalto (see its windows in the introductory page); (right) Museo Regionale di Palazzo Bellomo: original inscription above the portal which provides information on the foundation of the building

Modern Syracuse has one good and several very narrow bad streets. Cockburn.
Cockburn made reference to a street (today's Via Cavour) which crossed Ortigia from its northern entrance to the square where the Cathedral and the Town Hall were located. While the area east of this street was largely rebuilt after the earthquake and later on it was modified by the opening of new streets and squares, the western section of the town retains most of its medieval aspect. Palazzo Mergulese Montalto was built in 1397 and it is a very fine example of Catalan Gothic architecture. In 1973 the building was about to collapse, but it was eventually strengthened and brought back to its assumed original aspect. All foreign travellers who visited Syracuse in the late XVIIIth century agreed on the town being very impoverished in comparison with Catania, which they usually had seen before. As a matter of fact, because of the economic decline of the town many old churches and houses were not replaced by more modern ones as it occurred elsewhere. The medieval quarter was known as La Sperduta (the lost one) and its maze-like layout was developed during the Arab tenure. 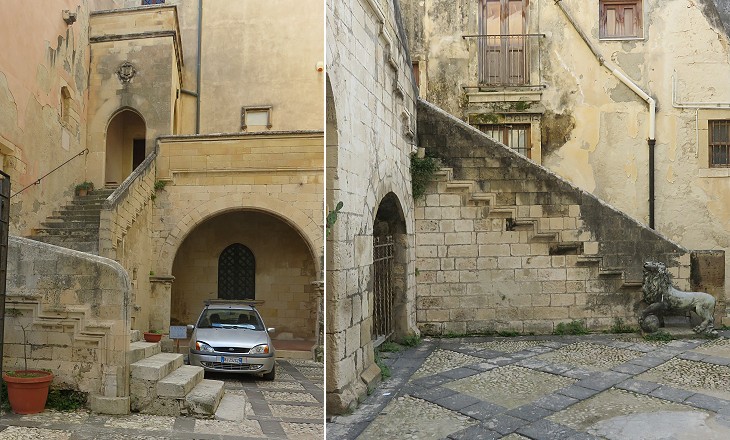