- Granada after 1492
(left - Mosaic at Italica; right - decoration at the Alcazar of Seville)

You may wish to see an introductory page to this section or pages on Moorish Granada first. 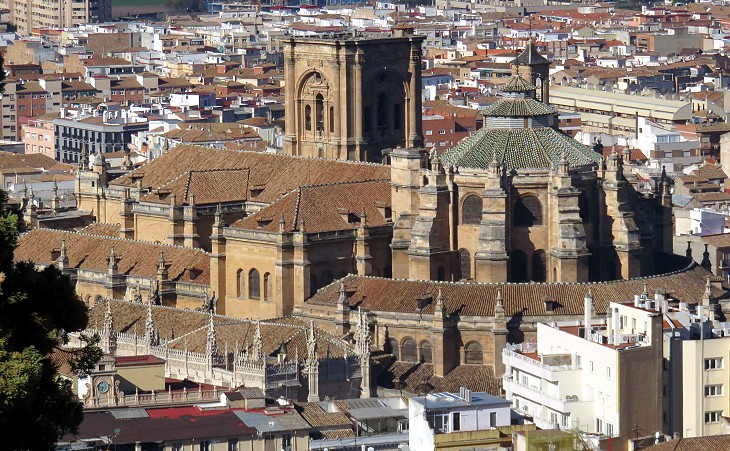 Cathedral seen from the Alcazaba (Fortress) of the Alhambra

The glories of Granada have passed away with its old inhabitants; its streets are choked with filth, its aqueducts crumbled to dust, its woods destroyed, its territory depopulated, its trade lost, in a word every thing except the church and law, is in a most deplorable situation.
Henry Swinburne - Travels through Spain in the Years 1775 and 1776 in which several monuments of Roman and Moorish architecture are illustrated.
When Swinburne visited Granada the city had lost the importance it had acquired as the symbol of the Reconquista, the long historical process which led to the end of the Muslim rule in the Iberian peninsula in 1492. It was impoverished and neglected by the central government, yet it retained churches and palaces which Ferdinand of Aragon and Isabel of Castile and later on their grandson Emperor Charles V built to provide the city with monuments not inferior to those of the Moors. 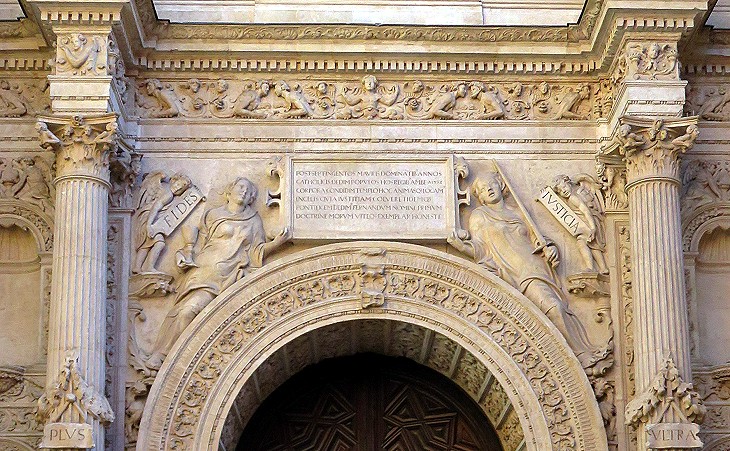 Cathedral: Puerta del Perdon with inscription celebrating the end of 700 years of Moorish rule over Granada; for the motto "Plus Ultra" read below in this page

Per se the 1492 conquest of Granada was not a significant military or political development. The Nasrid Emirs of the city were Muslim vassals of the Kingdom of Castile since 1246 and after a failed invasion of Spain by the Marinid rulers of Morocco in 1340, their military potential declined and they lost important towns as Antequera (1410) and Ronda (1485). A dynastic quarrel between Boabdil, the last Emir of Granada, and his uncle ended with the surrender of Almeria to Ferdinand and Isabel in December 1489, thus depriving the Kingdom of Granada of its main access to the Mediterranean Sea. 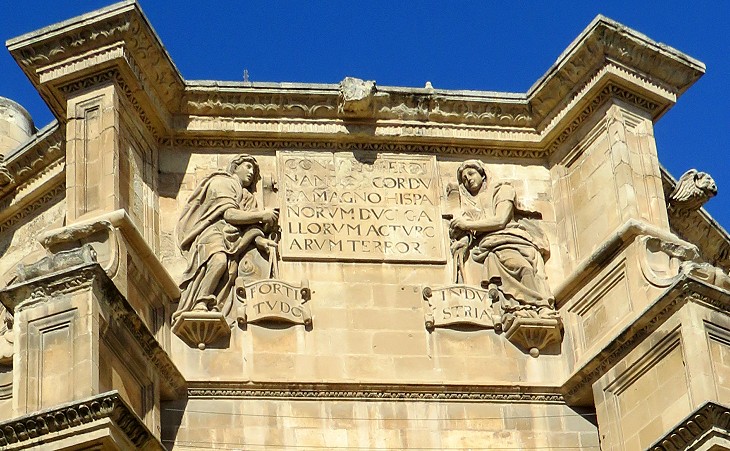 Iglesia de San Jeronimo: inscription celebrating El Gran Capitan (Gonzalo Fernandez de Cordoba) who is hailed as the "Terror of the French and the Turks"; he fought in the conquest of Granada

The importance of the conquest of Granada lay on political and military developments which had occurred far away from Spain. i.e. the Fall of Constantinople in 1453 and the consequent threat of an Ottoman invasion of Western Europe. In 1480 an Ottoman fleet conquered the fortress of Otranto in the Kingdom of Naples, a possession of a branch of the House of Aragon, in order to establish a base from which an army could move towards Naples and Rome. The death of Sultan Mehmet II caused the abandonment of the project, but the Ottoman threat did not go away and the Popes called upon the Christian monarchs to act in defence of the Holy Faith. The Emirs of Granada were seen as potential allies of the Ottomans and the conquest of their kingdom was hailed by Pope Innocent VIII as a victory of Christendom against Islam and in 1494 Pope Alexander VI gave Ferdinand and Isabel the title of "Most Catholic Kings". 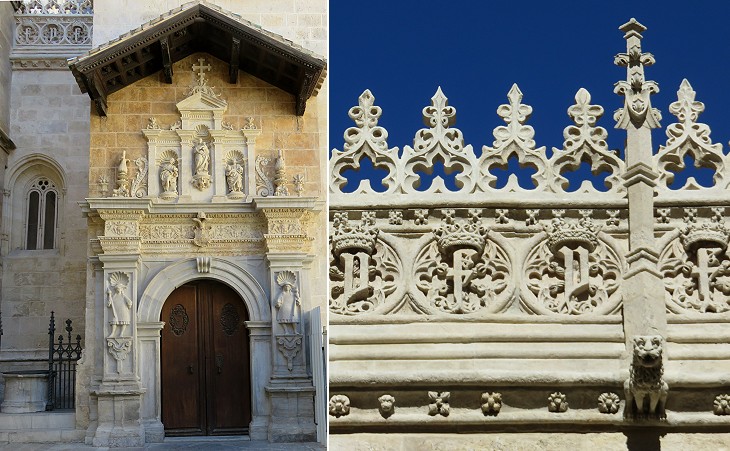 Capilla de los Reyes Catolicos, the tomb of Ferdinand and Isabel: (left) entrance; (right) decoration of the roof with the letters "f" and "y"

The conquest of Granada was regarded as such an achievement that in 1504 the royal couple decided to be buried in that city. The decision was also due to political aspects relating to the fact that their marriage had united the crowns of Castile and Aragon in the fight against the Moors, but not created the Kingdom of Spain yet. By choosing a location which was neither in Castile nor in Aragon they indicated the way ahead. Their immediate successors (Joanna and Philip of Castile, the parents of Charles V) were buried in the same location. A pomegranate, symbol of the city, was added to their combined coats of arms (you can see it in the image used as background for this page) and King of Granada is one of the many titles of the current King of Spain. 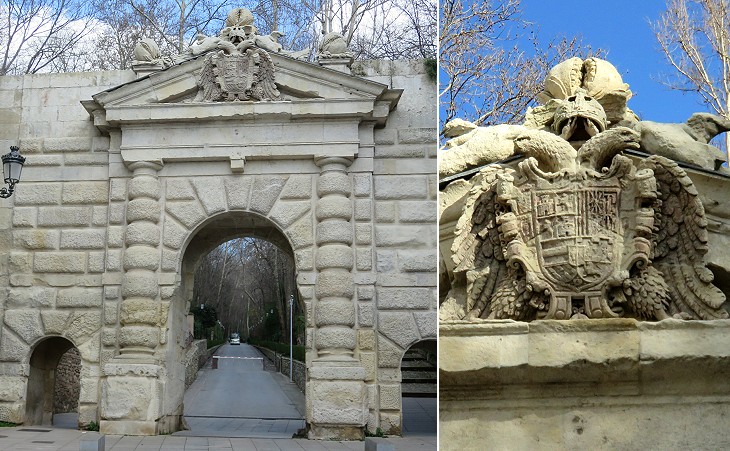 (left) Puerta de las Granadas; (right) coat of arms of Emperor Charles V which is held by the double-headed eagle of the House of Habsburg as he was also Archduke of Austria

This brings you through a massive gate built by the Emperor into the outward inclosure of the Alhambra. You then continue to ascend by a very steep avenue of elms which soon increases to a wood intersected in many directions by wild neglected walks where streams of clear water finding their passage obstructed by the rubbish of their old channels spread over the whole road. Swinburne
Charles was the first King of Spain (Carlos I de España) and he was involved in a long conflict with the Ottoman Empire, thus also for him Granada had a great symbolic importance. 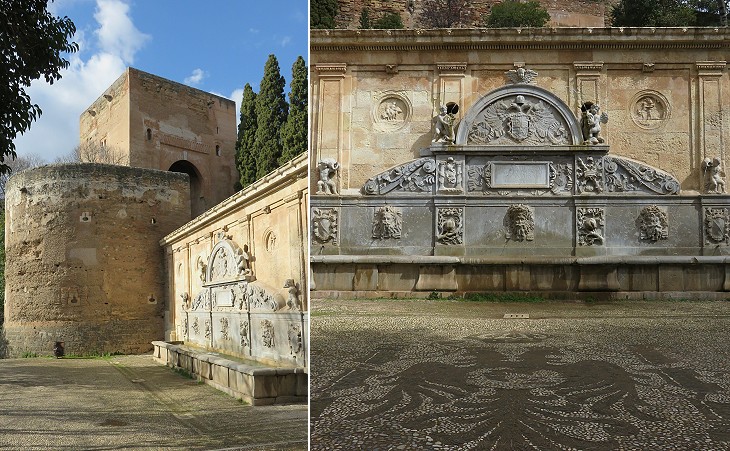 A large fountain adorns the platform near the top of the hill. The water, diverted from its proper conduits, has been suffered to run at random for such a length of time that it has destroyed most of the sculpture and embellishments which were in a very good taste. Here you turn short to the left and come under the walls of the inner inclosure. Swinburne
This fountain has recently been barbarously repaired and "restored."
Richard Ford - A Handbook for Travellers in Spain - 1855
In 1526 Charles married Isabella of Portugal at the Royal Alcazar of Seville; they spent their honeymoon at the Alhambra of Granada and they so much liked the location that Charles decided to build a palace there. 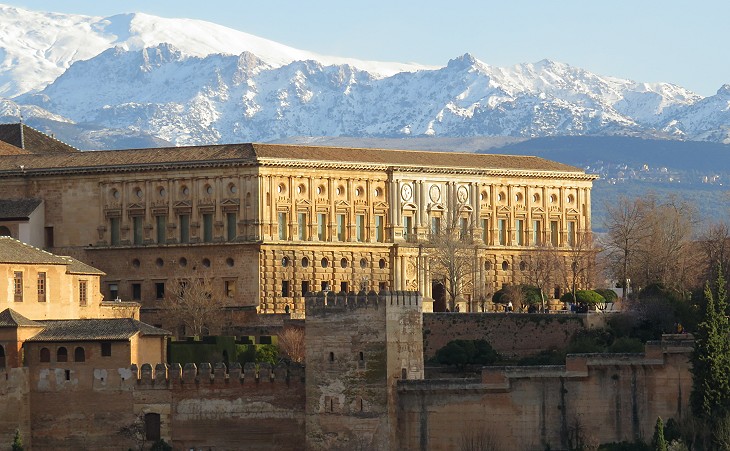 The pleasantness of the situation and purity of its air induced the emperor Charles the fifth to begin a magnificent edifice on the ruins of the offices of the old palace and it is thought he intended to fix his chief abode here, but his volatile temper, continual wars and frequent absences from Spain made him give up all thoughts of Granada long before he had finished the plan. (..) It was never finished which is much to be regretted by all lovers of the fine arts for there are few edifices more deserving of their admiration. The architect was Alonzo Verruguete. In this work he has discovered a most transcendent genius, grandeur of style and elegance and chastity of design. Swinburne
Alonso Berruguete (1488-1561) was the court painter and sculptor of Charles V. Today the design of the palace is attributed to Pedro Machuca (1490-1550) who began his career as a painter in Italy. He returned to Spain in 1520. 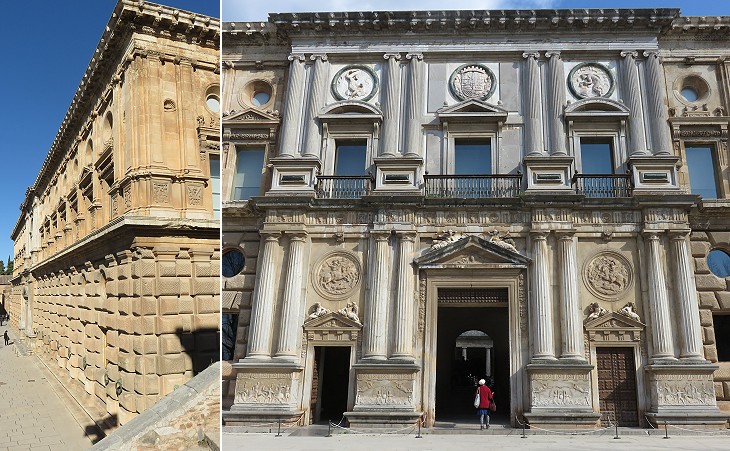 Palace of Charles V: (left) a view of one of its corners; (right) main entrance

This edifice is a perfect square of two hundred Spanish feet; it has two orders of pilasters Doric and Ionic upon a rustic base. The whole measures sixty two feet from the top of the upper entablement to the ground. Three of the fronts are free from all other buildings the fourth that to the north is joined and connected with the ancient palace of the Moorish kings. (..) The doors are designed in a great manner: the bassreliefs, figures, festoons, medallions are of excellent invention and execution. The ornaments of the cornices, windows and capitals are delicate and suitable to the general effect. Swinburne 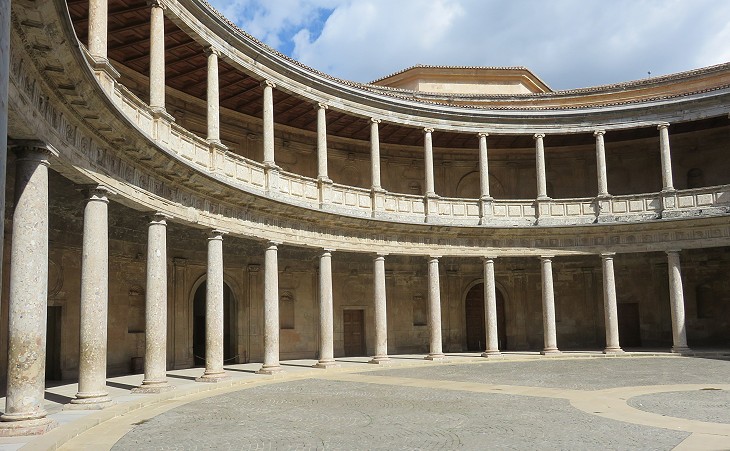 You come through an oblong vestibule into the court which forms the center of the palace. It is an exact circle of one hundred and forty-four feet diameter round which runs a Doric colonnade or portico of thirty two columns supporting an upper gallery of an equal number of pillars of the Ionic order. They are all of them of one entire block of reddish marble. The portico is nineteen feet wide and serves as a communication the staircase and the intended apartments which are disposed round the court in various forms and proportions. The roof of the gallery is crumbling away very fast and many of the columns are much damaged. The apartments never had any other covering than the sky and nothing but the matchless temperature of the climate could have saved this beautiful work so many years from total ruin. The magnificence, the unity of this whole pile but above all the elegance of the circular court quite transported me with pleasure on the first view and I have ever since found my admiration increase in proportion to the number of my visits. Swinburne
The palace of Charles V in my opinion and for reasons which I will explain has not attained the estimation of foreigners which it is entitled to. The Spaniards indeed have themselves ever been proud of it considering it one of the finest architectural monuments of their country. (..) Strangers as I have said come here for the purpose of viewing the Alhambra, most of them imbued with a feeling favourable to Moorish art and freshly excited by having just passed through the exquisitely beautiful Moorish Gate of Justice (which stands near the last grade of the ascent) and all with the expectation that the Moorish palace would present itself. The work of Charles V is thus viewed with disappointment and chagrin or with a feeling akin to indignation for its impertinent intrusion. For this reason I cannot help thinking that it has been and is misprized by all visitors.
From "The Architecture of Spain" by Frederick Yeates Hurlstone, President of the Society of British Artists in "The Builder" - Volume XXI - 1863
The comments by Hurlstone still apply today. If the palace had been built in Italy it would be admired as a masterpiece of Renaissance architecture. 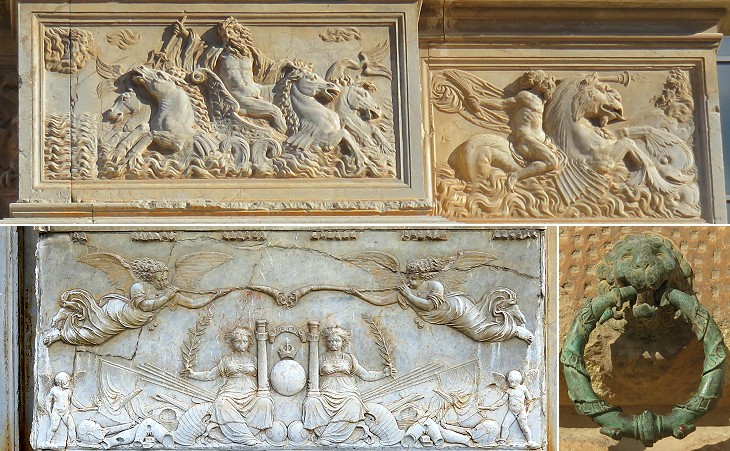 Palace of Charles V: (above) reliefs highlighting the Emperor's mastery of the sea; (below-left) relief with the "Plus Outre" motto between two columns; (below-right) a horse tie ring with the same motto

On the pedestals of the columns that support the entablement of the great door are reliefs on dark marble that for polish might pass for bronze at a little distance. Part the pediment is filled with a scroll thrown with great ease on which is inscribed "plus outre", the motto of the Emperor which he never failed introducing into every public work he undertook. Swinburne
Plus Oultre or Plus Ultra (Further Beyond) meant that Charles' empire spanned beyond the Pillars of Hercules (the Strait of Gibraltar) which were symbolized by two columns. The motto was suggested to the then young prince in 1516 by his Italian adviser and physician Luigi Marliano (see Plus Ultra in monuments at Messina and Palermo in Sicily). 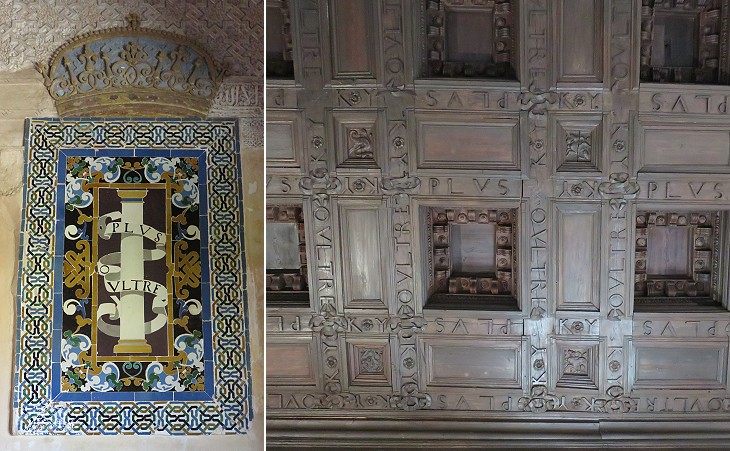 The motto in the Nasrid Palaces: (left) Chapel; (right) Apartment of Charles V

Eventually in 1561 King Philip II decided to make Madrid, at the time a minor town, the capital of Spain and gradually Granada fell into oblivion. Charles V and his successors were buried in the Monastery of El Escorial, northwest of Madrid.

Move to Introduction and the Alhambra Hill or Nasrid Palaces or Other Moorish Monuments.