The cliffs of Mt. Conero seen from "il Passetto", a modern development of Ancona to the east of the old town

Ancona retains its ancient name, supposed to be derived from its reclining posture. (..) It was built by a band of Syracusan patriots, who, to avoid the insolence and lawless sway of Dionysius the tyrant, abandoned their country and settled on this coast, about four hundred years before Christ.
John Chetwode Eustace - A Classical Tour through Italy in 1802
Ancona owes its name to the bend of the Adriatic Sea western coastline which is caused by Mt. Conero. The first Greek settlers from Syracuse called it ancon (elbow). Mt. Conero is the major break in the long beach which extends from Rimini to Apulia. The flat-topped limestone block rises to 1,877 feet and is divided from the Apennines foothills by an alluvial plain, It is composed of whitish and reddish limestone, and its seaward slopes are steep and covered with shrubs. 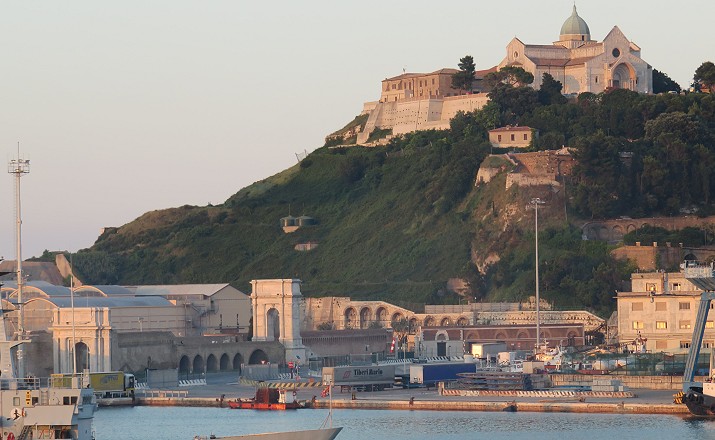 The oldest part of the harbour of Ancona with Mt. Guasco and the Cathedral of S. Ciriaco (above) and the wharf built by Emperor Trajan and extended by Pope Clement XII (below)

It was anciently remarkable for a celebrated temple of Venus, and, like Paphos and Cythera, was supposed to be one of the favorite resorts of the Goddess of Love and Beauty. In reality, it would be difficult to find a situation more conformable to the temper of the "Queen of smiles and sports" or better adapted to health and enjoyment than Ancona. Seated on the side of a hill, forming a semicircular bay, sheltered by its summit from the exhalations of the south, covered by a bold promontory from the blasts of the north, and open only to the breezes of the west, and the gales that wanton on the unruffled bosom of the waters, which bathe its feet, surrounded by fields of inexhaustible fertility, Ancona seems formed for the abode of mirth and luxury. Eustace
The northern end of Mt. Conero is a headland (Mt. Guasco) which shelters a small bay from bora, a very cold and strong NE wind affecting the Adriatic shores which is persistent and may continue for some days. The protection ensured by Mt. Guasco was complemented by a wharf the construction of which was celebrated by two triumphal arches. By the time of Emperor Tiberius the Romans had expanded their possessions to the whole of the Balkans and set the border of the Empire on the River Danube. Ancona acquired great importance as the maritime route from its harbour to Salona was the shortest distance between Italy and the Balkans. A new road branched off Via Flaminia at Nocera to link Rome with Ancona. The relief of Colonna Traiana shows the arch built by the emperor (before its completion) and some large buildings including a temple to Venus Euplea (patron of seamen), which stood on Mt. Guasco where the Cathedral was built later on. The Romans, aware of the advantages of this port, made it their principal naval station in the Adriatic; built a magnificent mole to cover the harbour, and adorned it with a triumphal arch. This useful and splendid work was undertaken and finished by Trajan, and to him the triumphal arch is dedicated. It is still entire, though stripped of its supernumerary ornaments; the order is Corinthian ; the materials, Parian marble; the form light, and the whole is considered as the best, though not the most splendid, nor the most massive, model, that remains of similar edifices. Eustace
The arch was decorated with bronze naval symbols, most likely rostra. The holes where they were placed are still visible. According to the general opinion its marble came from Mt. Hymetthus near Athens, but recent studies suggest the marble came from Marmara (Marble) Island in the sea by the same name. The design of the arch is attributed to Apollodorus of Damascus who most likely was charged with the construction of the wharf too. It is more slender than other Roman triumphal arches and its height was emphasized by bronze statues on its top. It was incorporated into the medieval walls of Ancona. You may wish to see the Arch of Trajan at Benevento. 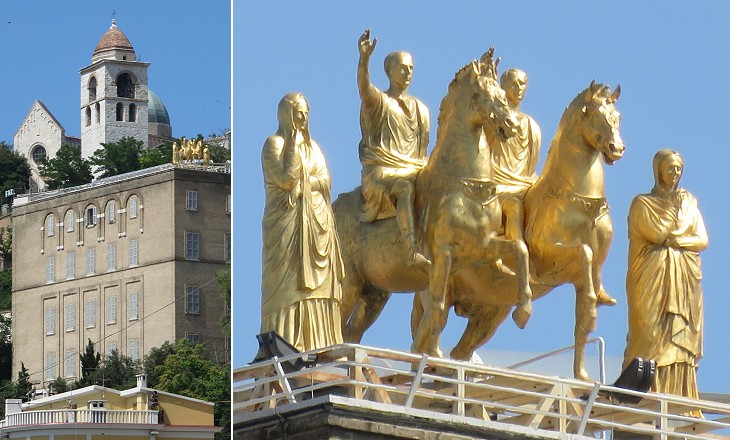 The bronze statues at the top of the arch have never been found, but the inscription indicates that the central statue of Trajan was flanked by those of Plotina, his wife and Marciana, his sister. The two women were given the title of Augusta and are known to have held great influence over the Emperor, in particular by favouring Hadrian's accession to the throne.
In 1946 some 300 broken fragments of gilded bronze statues were found at Pergola. At the end of ten years of work the fragments were assembled and it was ascertained that they made up a group of two horsemen and two women. The original location of the group and the portrayed personages have not been identified yet. Details in the women hairstyles indicate that the statues were cast in the first half of the Ist century AD, so they could not possibly be those on the Arch of Trajan. Yet the copies placed on the roof of the Archaeological Museum of Ancona give an idea of those which stood on the arch, although most likely the Emperor was portrayed on a chariot. 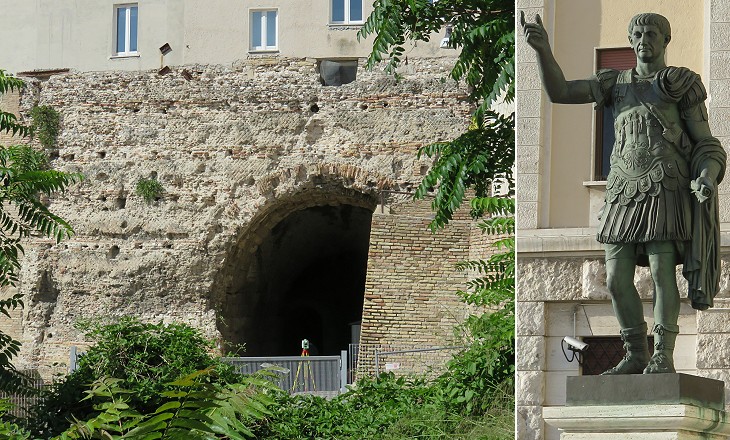 (left) Ruins of the amphitheatre; (right) 1934 statue of Emperor Trajan in the centre of Ancona

WWII bombing caused the collapse of the medieval houses which surrounded the Cathedral. These ancient buildings were razed to the ground which led to the discovery that they stood on or incorporated Roman walls, an occurrence which often occurs in Italy when an old building is pulled down. The presence of an amphitheatre near the Cathedral had already been identified in 1810, but excavations were carried out only after WWII. It appears it could house an audience of 7,000 and that it was enlarged at the time of Emperor Trajan, who can be regarded as a second founder of the town. Other memories of the Roman period, including baths and streets, have been identified in the foundations of several buildings. The mosaic decoration of some early churches indicate that Ancona continued to be an important port well into the VIIth century when it was part of the Byzantine territories ruled by the Exarch of Ravenna. The conquest of the town by the Longobards in the early VIIIth century severed the trading links Ancona had with Constantinople. In 839 it was almost razed to the ground by the Saracens. 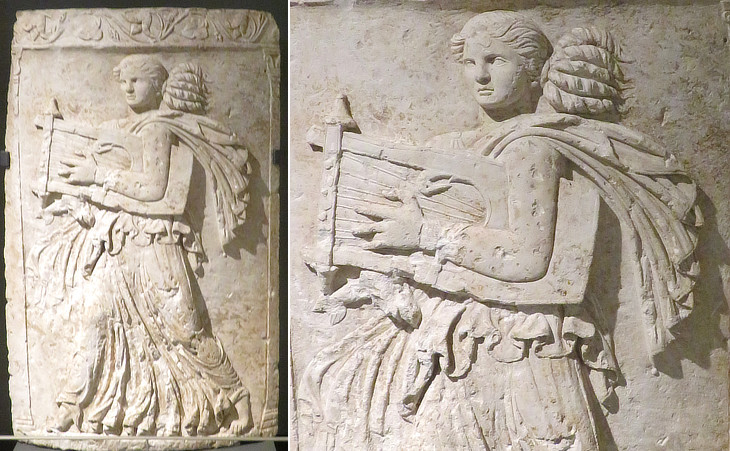 Archeological Museum of Ancona: Muse playing a cithara (Ist century BC) discovered in 1904 at Cardeto, a hill behind S. Francesco alle Scale; it calls to mind a funerary monument in the environs of Rome