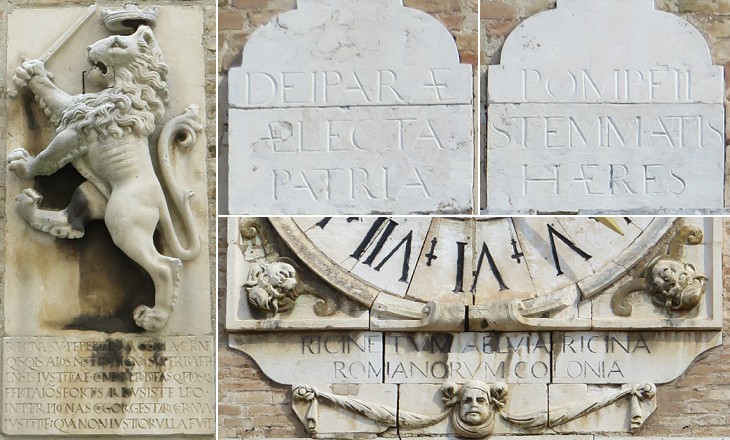 Inscriptions decorating Torre Comunale: (left) coat of arms of Recanati by Andrea Sansovino with a short poem praising the town; (right-above) inscriptions saying: "Country chosen by the Virgin Mary" and "Heir of Pompey's coat of arms"; (right-below) "Recanati (was born out of) Helvia Ricina, a Roman colony

The inhabitants of medieval Recanati claimed they were the descendants of those of Helvia Ricina, a Roman town situated in a nearby valley. As a matter of fact the inhabitants of Macerata also claimed they came from Helvia Ricina, because the ruins of its ancient theatre were very near their town. The lion holding a sword in the coat of arms of Recanati was assumed to be a war "badge" used by Pompey. Helvia Ricina was most likely destroyed during the Vth century and its inhabitants founded other settlements on the nearby hills. Recanati is first recorded in 552 as a castle which was seized by the Ostrogoths. Together with Ancona it eventually became a Byzantine possession. 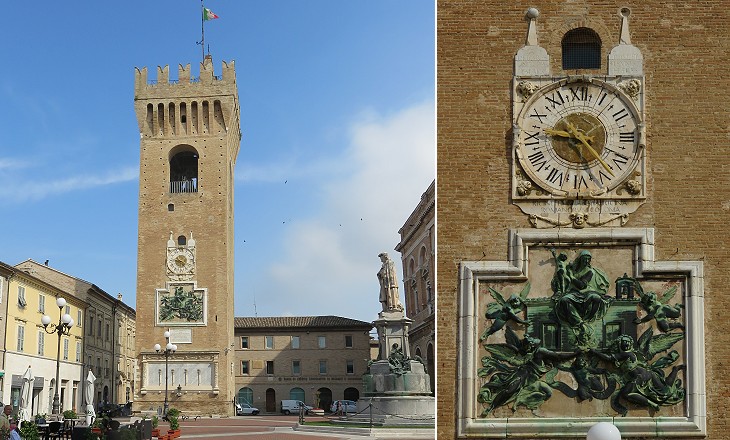 After the year 1000, similar to many other Italian towns, Recanati became a Comune, an almost independent city-state. It soon clashed with Osimo and other nearby Comuni. Eventually in 1202 the main Comuni of the region reached an overall peace agreement.
Recanati took advantage of the conflict between the German Emperors and the Popes. In 1229 it was allowed by Emperor Frederick II to build a port at the mouth of the River Potenza and in 1240 Pope Gregory IX made Recanati a bishopric see. Its importance grew in 1294 when angels carried the Holy House of the Virgin Mary from Nazareth to a hill near the town. 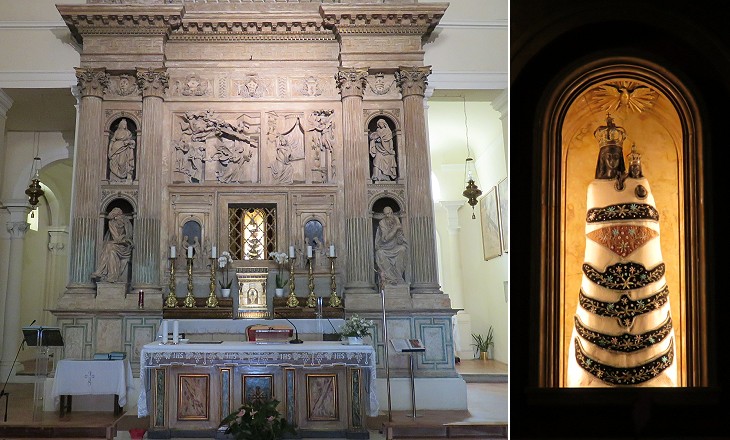 S. Anna: (left) copy of the Holy House; (right) copy of Our Lady of Loreto

For two centuries the inhabitants of Recanati regarded Loreto, the location of the shrine of the Holy House, as a detached quarter of their town, but towards the end of the XVth century it became a separate town and the Popes promoted the construction of a grand church containing the Holy House. Recanati asked to be given some bricks from the Holy House and built a replica of it inside a church of the town. In the year 1800 it was partly covered with a stucco copy of the marble casing at Loreto. 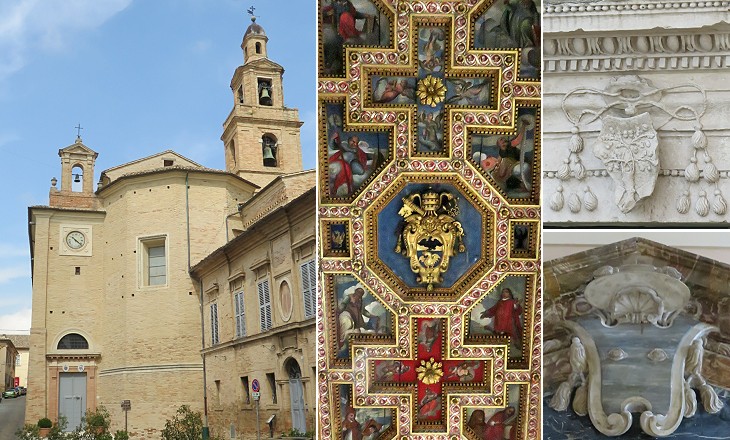 The Cathedral was built in the XIVth century, but it was modified in the XVIIth century and greatly renovated in the following one. Cardinal Girolamo Basso della Rovere was known as the "Cardinal of Recanati" because he was Bishop of the town for 31 years. The coat of arms of Bishop Benedetto Bussi easily catches the attention of visitors because it is so unusual (you may wish to see another Bussi coat of arms in my Hall of Fame page). 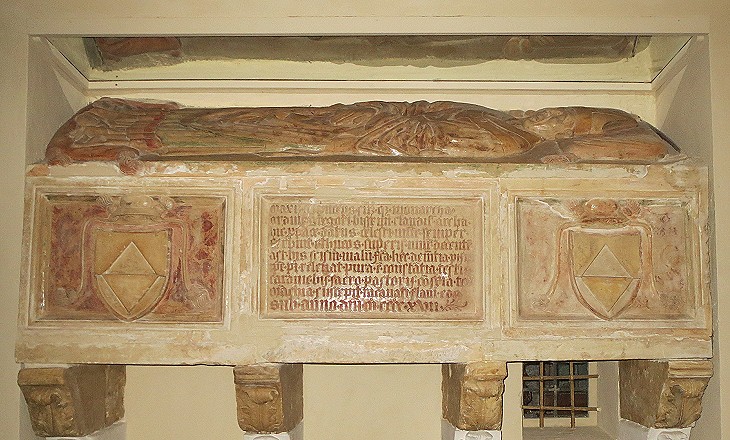 When the interior of the Cathedral was redesigned some of its funerary monuments were relocated to a dark corridor leading to the sacristy. One of them is of particular interest because it belongs to Pope Gregory XII who abdicated in 1415. The monument bears his coat of arms as a cardinal, rather than as a pope (in the Cathedral of Siena there are coats of arms of this Pope with the papal crown - it opens in another window). His abdication was recommended by the Council of Constance. His acts as a pontiff and the cardinals he created during his pontificate were considered as legitimate. After the abdication he was named legate (governor) of Ancona, but he was buried at Recanati, the last pope not to be buried in Rome.
Pope Martin V, his successor, was not elected until the death of Gregory in October 1417, so there were not two living popes at the same time, as had occurred with Pope Celestine V and Pope Boniface VIII in 1294-96. 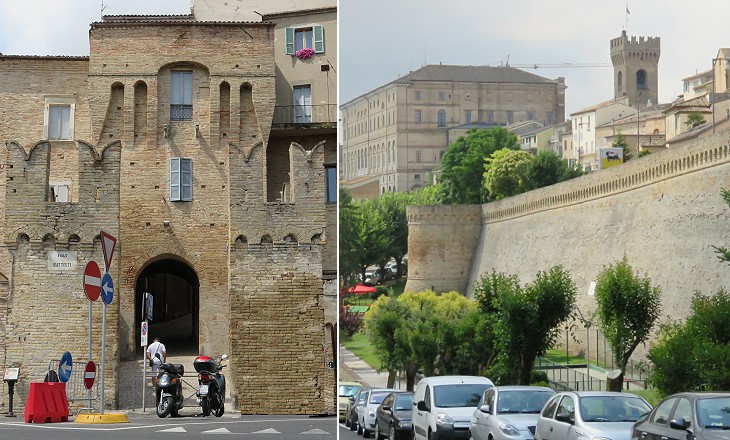 The long line of walls, utterly useless now, if ever they were otherwise, for any purpose of defence, but admirable as a promenade for the citizens, encircle the city a little below the crest of the ridge, the last bit of which rises within them to the watershed line, so steeply as to make the little narrow lanes which climb from the different gates up to the main street almost impracticable for wheeled carriages.
Thomas Adolphus Trollope - A Lenten Journey in Umbria and the Marches - 1862 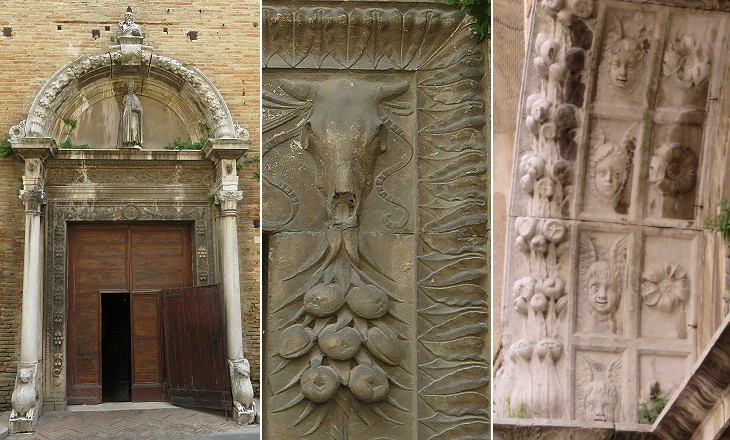 Portal and decorative details of S. Agostino (1484). You may wish to see the cloister with a medieval tower in the introductory page

Being an important bishopric see was key to the economy of a town of the Papal State. It meant housing seminaries, convents of the main orders, tribunals, orphanages and other charitable institutions. For this reason Recanati is the only town of the Marches which rejoiced at the news of the death of Pope Sixtus V. The Pope had separated Loreto from the diocese of Recanati, greatly diminishing its importance, but in 1592 Pope Clement VIII reunited it to Recanati (until the XXth century). 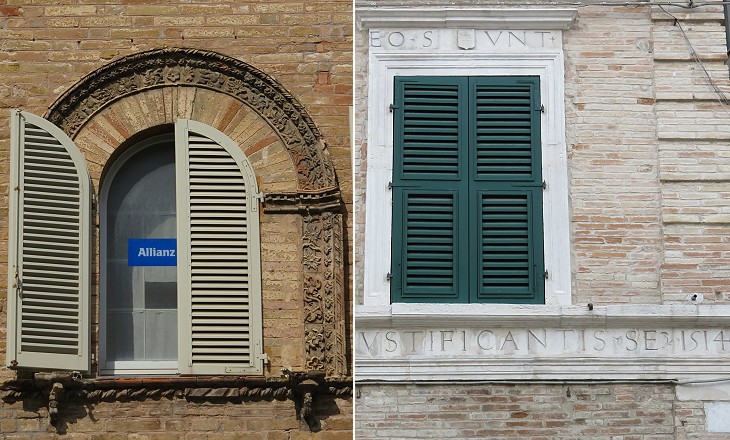 At the first aspect the impression which Recanati makes on a visitor is a pleasing one. It is in the first place a clean town; and indeed, as long as Heaven sends water from the skies, can hardly be otherwise. For the ridge of mountain on which the long line of city is built is so narrow and so steep, that every shower washes it as it washes the roof of a house. It is, partly from the same cause, a remarkably healthy place. The main street runs along the highest crest of the ridge, and of itself constitutes nearly the entire city.
T. A. Trollope 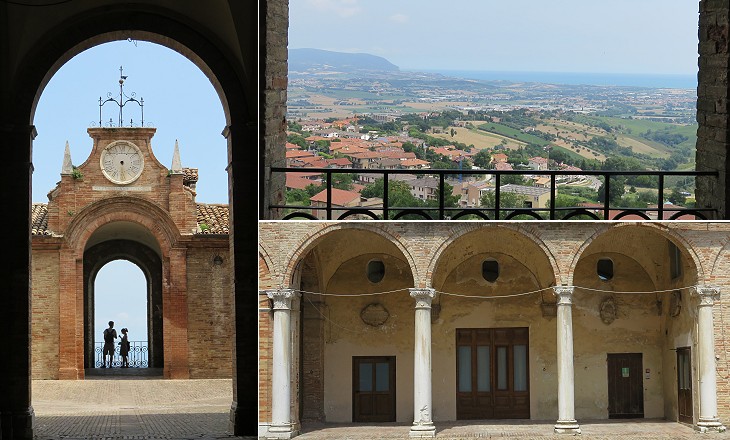 Palazzo Venieri aka Palazzo degli Studi because it houses "Liceo Classico Giacomo Leopardi", a secondary school where the study of Latin and ancient Greek and their literature are compulsory: (left) courtyard seen from the entrance; (right-above) view towards Mt. Conero and the Adriatic Sea; (right-below) late XVth century side of the courtyard attributed to Giuliano da Majano

In 1473 Jacopo Antonio Venieri was created cardinal by Pope Sixtus IV. He was born at Recanati of Venetian parentage and he was a distant relative of Pope Eugenius IV. Cardinals were expected to hold their own court and Venieri began to build a large palace commanding a very fine view in his hometown. Unfortunately for him and for Recanati he died in 1479 and the palace (in Florentine style) was never completed. Eventually in 1729 it was bought by the Carradori, a family of rich landowners who were admitted to the nobility of Recanati in 1728. They completed the building in the style of that period and the courtyard includes a fine balcony with a nice view. 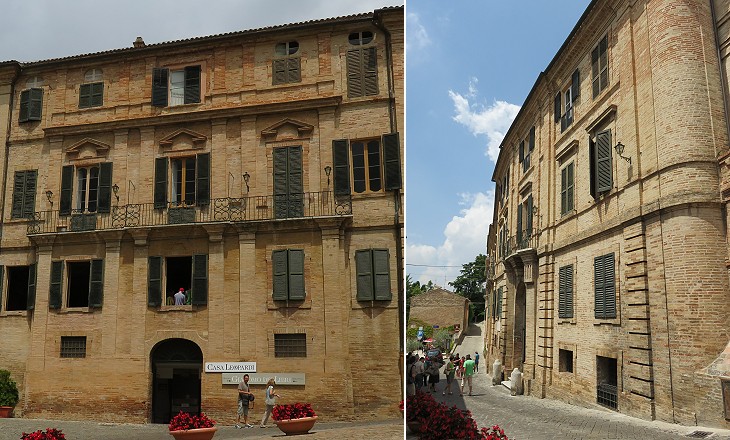 Recanati is the hometown of Giacomo Leopardi (1798-1837), one of the greatest Italian poets of the XIXth century and by far the most popular one today. The Leopardi were a family of ancient nobility and the mother of Giacomo belonged to another local noble family. Giacomo grew up in a large palace where his father had gathered a library of 20,000 volumes. He spent so much time reading that he undermined his physical constitution. The City of Recanati has erected a large monument to Leopardi in the main square (you can see it in the second photo of this page). 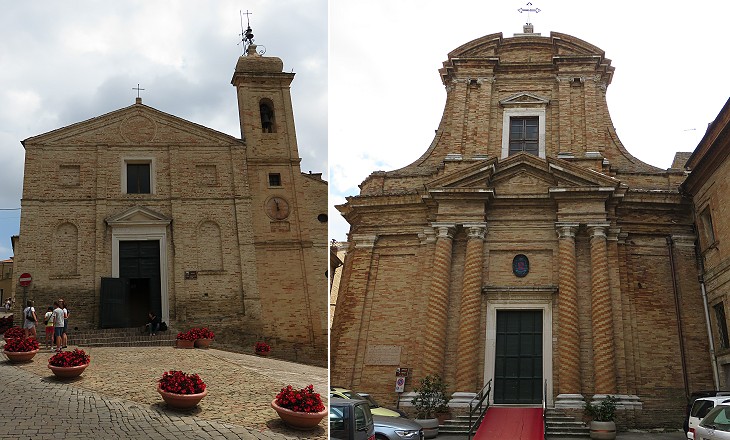 The Leopardi were very devout and ancestors of Giacomo financed repairs and improvements to churches near their palace. S. Maria di Monte Morello was actually a sort of Leopardi church as it stood opposite their palace.
S. Vito belonged to the Jesuits who rebuilt the façade after it had been damaged by an earthquake in 1741. The new façade was designed by Luigi Vanvitelli, the architect of Lazzaretto and Arco Clementino at Ancona. He devised an ingenious and inexpensive way to give emphasis to the high columns at the sides of the entrance. 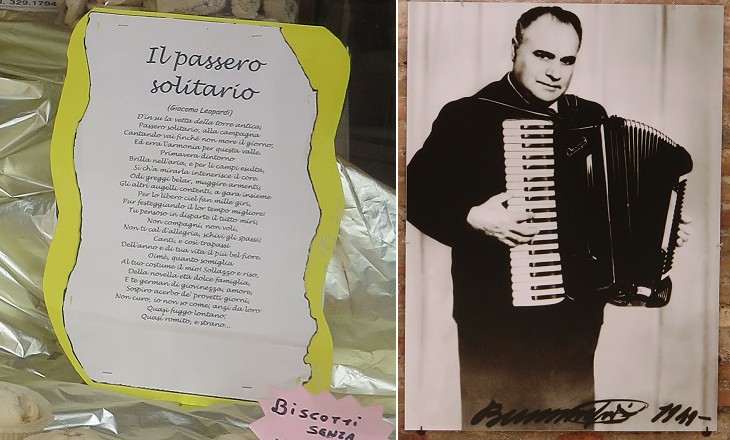 (left) "Il Passero Solitario" (The Solitary Bird - it opens in another window) by Giacomo Leopardi in a shop window; (right) poster of a photo of Beniamino Gigli playing an accordion (manufactured at Castelfidardo near Recanati)

Mortal life, will not brighten/ with new light, or new dawn,/ once lovely youth is gone./ It will be lonely to the end. Translation by A. S. Kline.
In his poems Leopardi chanted human unhappiness once youth is gone. Very often he made reference to sites of his natio borgo selvaggio (wild native place) and Italians enjoy visiting them as they know his poems by heart (and in case they have forgotten some passages there are reminders everywhere).
Beniamino Gigli (1890-1957) is another famous son of Recanati. He was the most famous tenor of his generation. See a page on one of his performances at Caracalla in 1939. 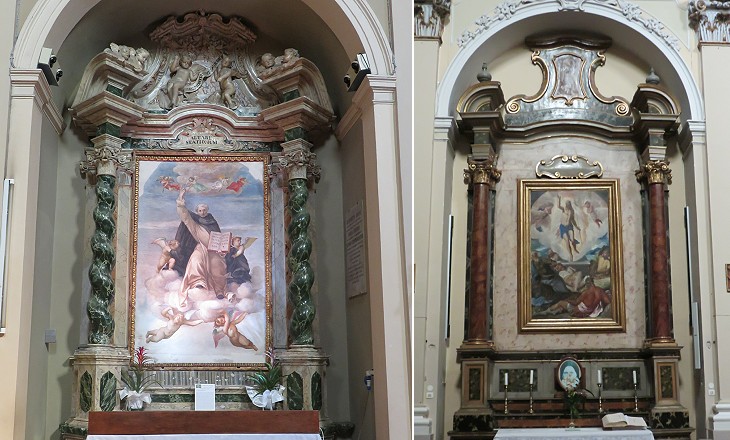 The churches of Recanati have some good paintings of the XVIth century. They were eventually placed on altars which imitated those of Rome, although often they were decorated with faux marbles and stucco statues. The image used as background for this page shows another example of Roman fashion at Recanati, a symbol of death on a capital of S. Pietrino.