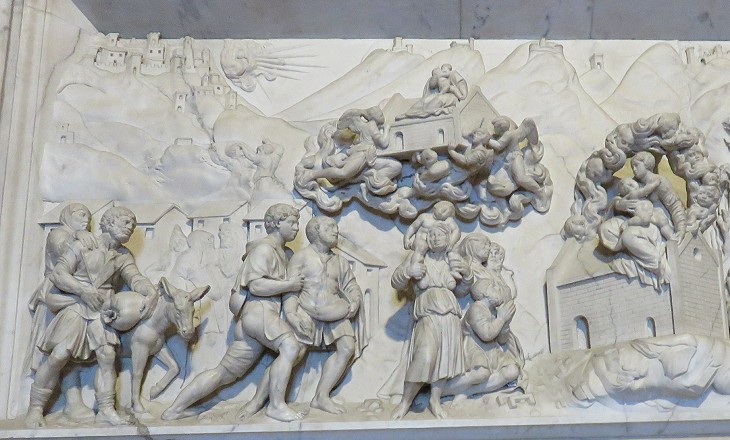 According to tradition in 1291 angels carried the house of the Virgin Mary from Nazareth to a location in Dalmatia and three years later to a hill near Recanati in the Marches. A wall was built around the house and a small wooden Madonna and Child (Our Lady of Loreto) was placed inside. Pilgrims began to visit the shrine (known as la Santa Casa/the Holy House), but for almost two centuries it had only a local relevance.
In June 1464 Cardinal Pietro Barbo accompanied Pope Pius II to Ancona from where the Pope planned to start a Crusade to take back Constantinople. In August the Pope died and Cardinal Barbo, on his way to Rome to attend the conclave, fell gravely ill at Recanati. He was advised to seek the help of Our Lady of Loreto and he visited the Holy House where he fell asleep. In a dream he was told he would be the next pope and when he woke up the illness had gone. A few days later he became Pope Paul II and he ordered the construction of a large sanctuary. 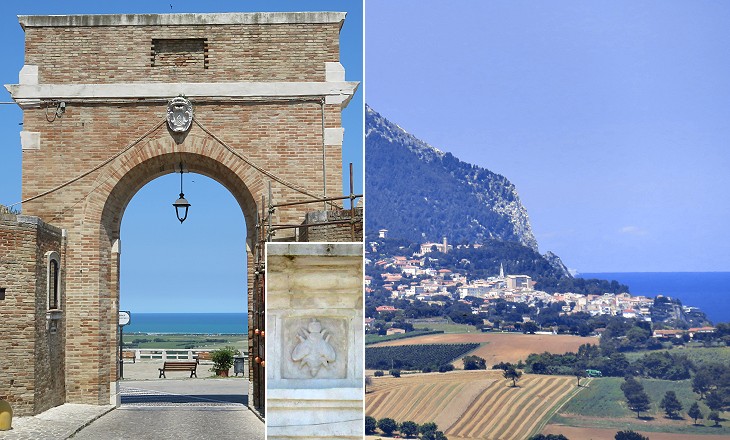 Loretto is situate on a very bold and commanding eminence. This town is modern, and owes its existence to the Santissima Casa, and its splendor to the zeal or the policy of Sixtus Quintus. It is large, well built, populous, and, notwithstanding its elevated site, well supplied by an aqueduct with water. It is surrounded with a rampart, and from that rampart, commands a varied and most delightful prospect on all sides.
John Chetwode Eustace - A Classical Tour through Italy in 1802
Because Loreto is situated only three miles from the coast, the Popes feared that its new sanctuary, to which pilgrims were expected to donate gold and silver ex-votos, could become a target for pirate raids or even prompt an attempt by the Ottomans to seize such an important symbol of the Christian faith. For this reason they immediately started the construction of defensive walls which were upgraded in the XVIIth century. 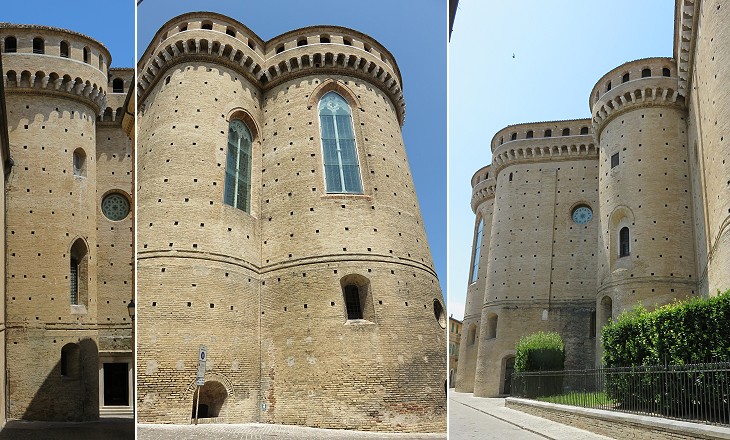 Broadly speaking the construction of Basilica della Santa Casa occurred at the same time as that of S. Pietro Nuovo in Rome. It began at the end of the XVth century and it was completed in the XVIIth century with some minor additions in the XVIIIth century. Many of the popes and architects (e.g. Donato Bramante and Antonio da Sangallo the Younger) involved in the construction of S. Pietro had a role in that of Basilica della Santa Casa. 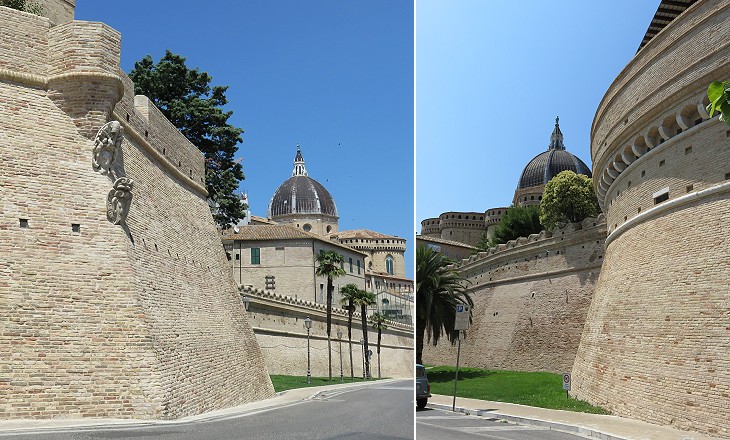 Pope Sixtus IV and Pope Julius II issued bulls granting indulgences to those who visited Loreto. On the miraculous voyage of the Holy House the latter wrote ut pie creditur (as the pious ones believe) in his bull, because the event was met with some scepticism during the Renaissance.
Today the Holy House is thought to have been removed from Nazareth and shipped to Europe by the defenders of Acre, the last remnant of the Kingdom of Jerusalem, before the fall of the town in 1291. The reference to the angels perhaps was due to members of the Byzantine Angelos family having been involved in the relocation of the building (they ruled Epiros in Northern Greece in the XIIIth century). 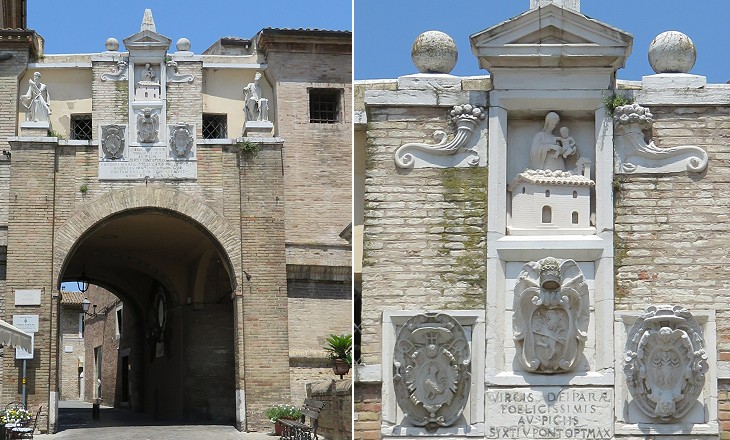 Pope Sixtus V was born in the Marches and he did much to improve the living conditions of its inhabitants. At Loreto the initiatives promoted by the Pope were overseen by Cardinal Antonio Maria Galli, Bishop of Osimo.
The Pope made Loreto a bishopric see and in order to provide it with a sizeable population he asked all towns of the Marches to send at least a family to Loreto, which however remained a very small town and its diocese was united to that of Recanati in 1592. Today Loreto has a special status (Territorial Prelature) inside the Archdiocese of Ancona-Osimo. 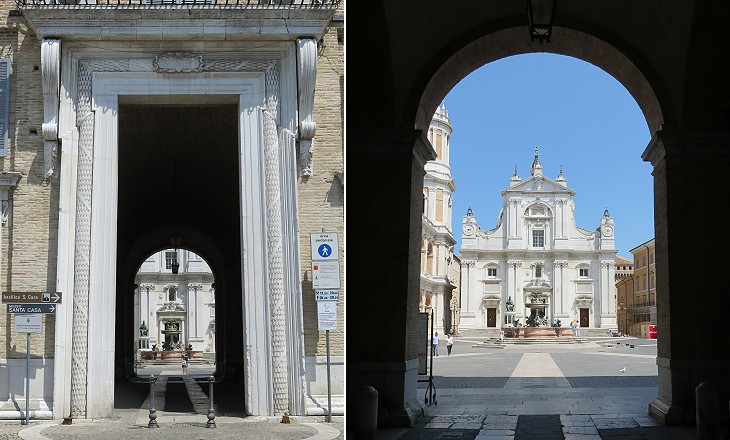 The usual access to Piazza della Madonna is through Corso Boccalini, a street starting at Porta Romana and entering the square at its south-western corner. A more spectacular approach to the square is via the western portal of Palazzo Apostolico. It bears the name of Cardinal Filippo Guastavillani, nephew of Pope Gregory XIII and Protector of the Holy House in 1580-1587. At that time the fountain, the bell tower, the statue of Pope Sixtus V and the façade were yet to be built, but one would think the contrary because the portal frames them perfectly. 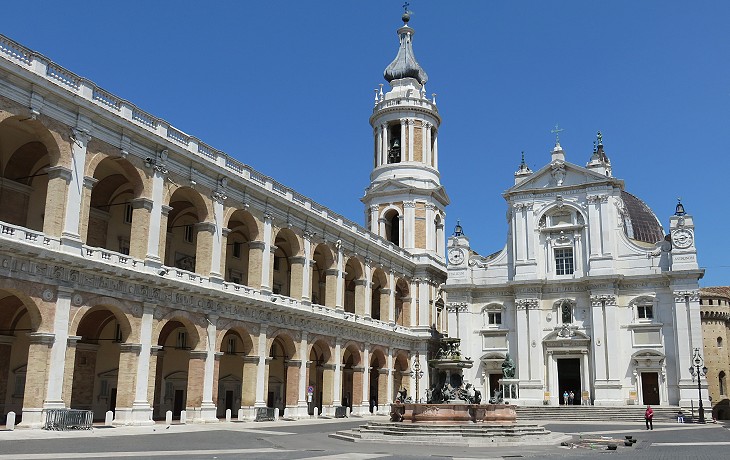 Hippodamus of Mileto is regarded as the father of town planning for having suggested a grid design for the development of Piraeus, the port of Athens. The ancient Romans developed a pattern for the towns they founded which was based on that of castra, their military camps. In the XVth century the importance of town planning (Ideal City) was revived by Leon Battista Alberti and other architects. Symmetry and proportions based on mathematical formulas (e.g. golden ratio, harmonious proportion) were key elements of the Ideal City. These principles influenced the design of Piazza della Madonna which should have been surrounded on three sides by Palazzo Apostolico (but the southern side was never built). You may wish to see the courtyard of Palazzo della Sapienza in Rome which resembles Piazza della Madonna with the church on the eastern side of a rectangle and double porticoes on the other three sides. 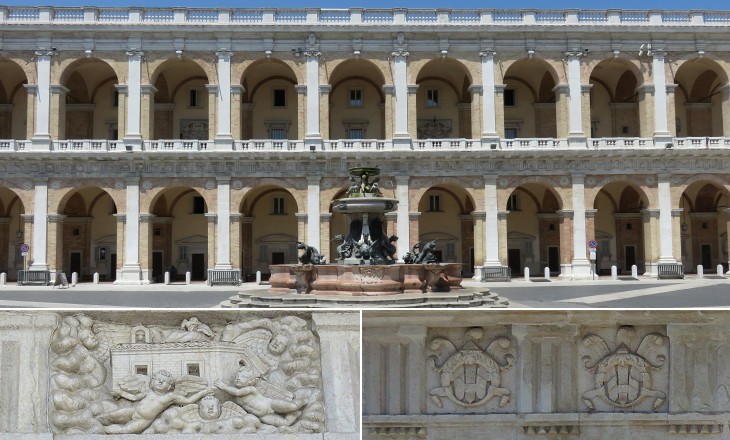 (above) Northern side of Palazzo Apostolico; (below) details of its decoration showing three ostrich feathers, heraldic symbol of Pope Leo X

The fact that the southern wing of Palazzo Apostolico was not built is not without positive aspects. The current front of low houses is more distant from the centre of the square than the southern wing would have been so it does not project its shadow over the square as the planned building would have. The construction of Palazzo Apostolico was initiated during the pontificate of Pope Leo X and it was completed during that of Pope Benedict XIV nearly 250 years later. 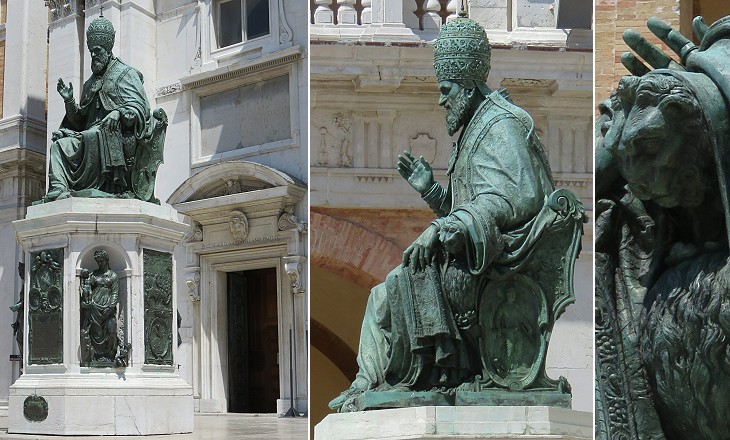 Statue of Pope Sixtus V by Antonio di Bernardino Calcagni and Tiburzio Vergelli (1589). A lion was one of the Pope's heraldic symbols

The statue was paid for by the eight cardinals from the Marches created by the Pope during the five years of his pontificate. Some of them were chosen from his inner circle: one of his grand-nephews, his cup-bearer, his private secretary, a Franciscan friend and another friend from Camerino, the hometown of his mother.
Pope Sixtus V is still very popular in the Marches, especially in their southern part where he is regarded as a national hero. Two similar bronze statues by other sculptors were erected in the main squares of Camerino and Fermo in the same period. 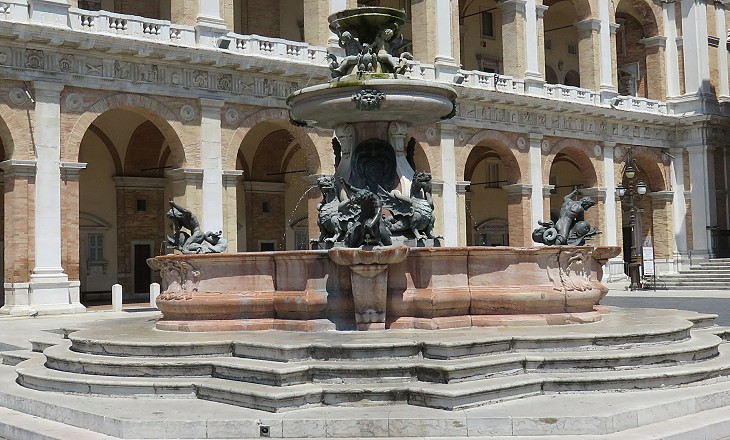 Developments at Loreto were often prompted by those occurring in Rome. In 1612 Pope Paul V celebrated the completion of an aqueduct which carried water to the western part of Rome by building Acqua Paola, a gigantic fountain. In 1614 the completion of an aqueduct carrying water to Loreto was celebrated with a large fountain at the centre of the town. Its shape based on sections of circles and squares and the use of coloured marbles can be seen in many Roman fountains (e.g. Fontana del Pantheon). 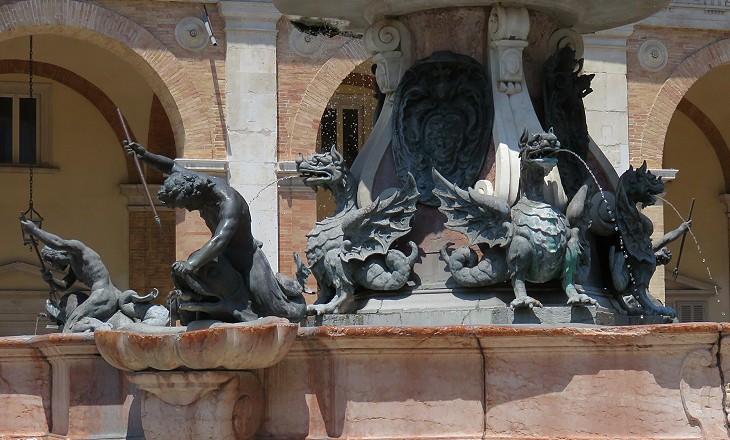 Detail of the fountain

The bronze decorations were added at a later period. They included eagles and dragons, the heraldic symbol of Pope Paul V. The statues were made by Tarquinio and Pietro Paolo Iacometti who worked at the Baptistery of Osimo. Another of their statues can be seen in the image used as background for this page. Perhaps Georg Raphael Donner saw it during his stay in Italy in 1715 and had it in mind when in 1737 he made a statue having the same subject for a fountain in Vienna. 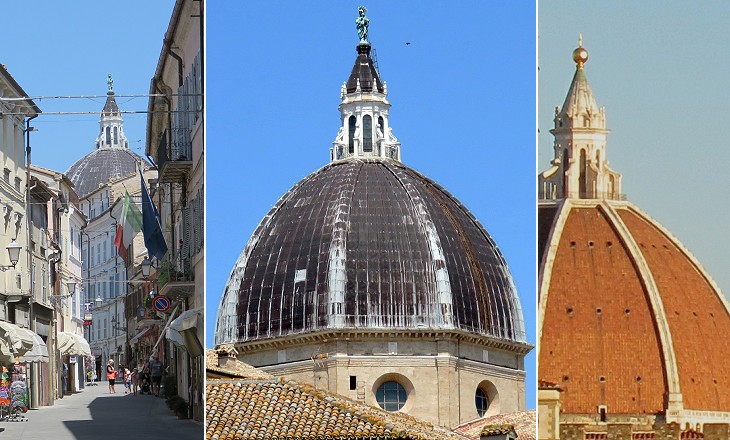 The dome was completed in 1500 by Giuliano da Sangallo. Similar to the dome of S. Pietro it cannot be properly seen from the main square because the façade hides its view. The lantern was added in ca 1590, but it was modified at the end of the XIXth century to emphasize the resemblance of this dome with that of S. Maria del Fiore in Florence. 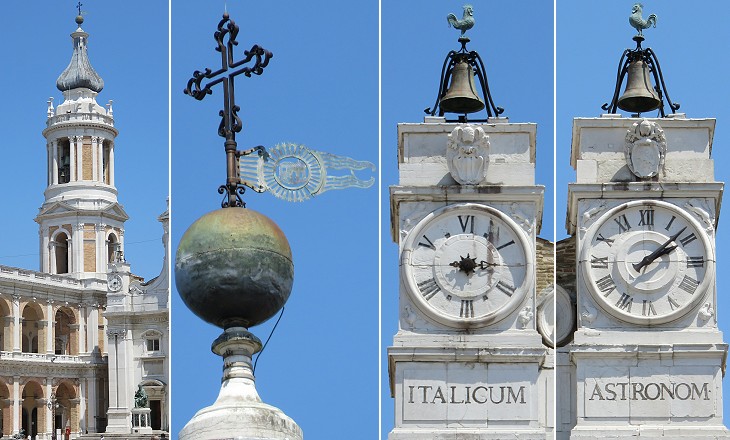 (left to right) Bell tower designed by Luigi Vanvitelli (1750); weathervane at the top of the bell tower showing the Holy House; clock indicating the "Italian Hour" and above it coat of arms of Pope Benedict XIV; clock indicating the astronomical hour and coat of arms of Pope Clement VIII (the cocks on top of the bells are the heraldic symbols of Cardinal Galli)

Luigi Vanvitelli was one of the leading architects of his time and he spent many years in Ancona where he improved the harbour facilities. His bell tower fits well with Palazzo Apostolico because of his meticulous use of the same materials.
The presence of two clocks was frequent in Rome (e.g. in SS. Trinità dei Monti). 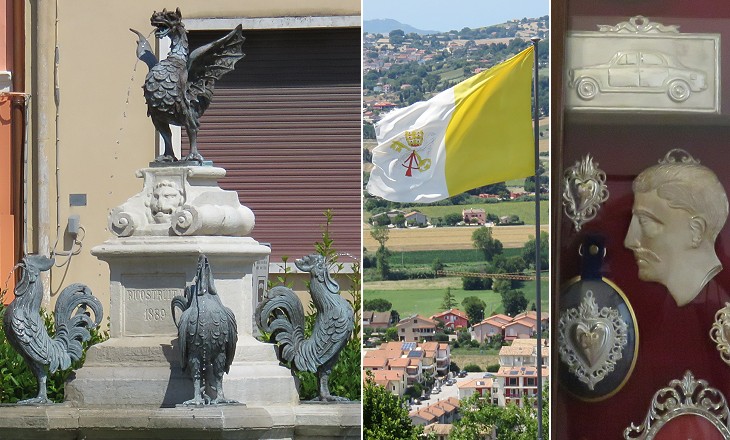 Gallo means cock in Italian and Cardinal Galli placed his heraldic symbol right below the dragon of Pope Paul V in this fountain outside Porta Romana. In origin it was a rectangular trough for horses, but in 1889 the basin was completely redesigned and slightly moved from its original location.
Basilica della Santa Casa is a property of the Holy See, but, unlike Palazzo di Castelgandolfo, it does not enjoy extraterritorial status, so it is part of the Republic of Italy. 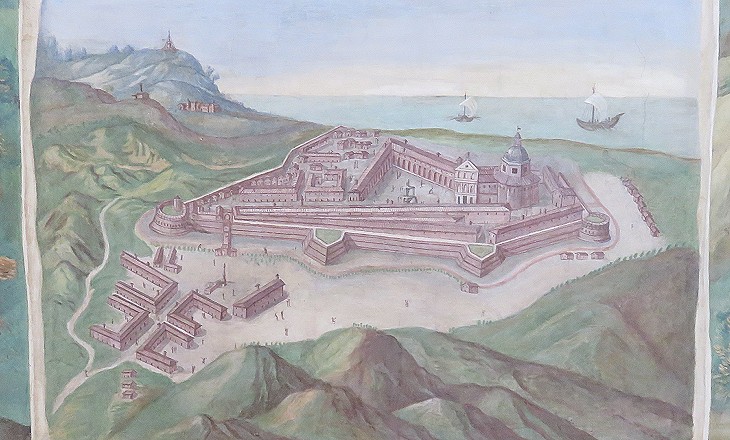