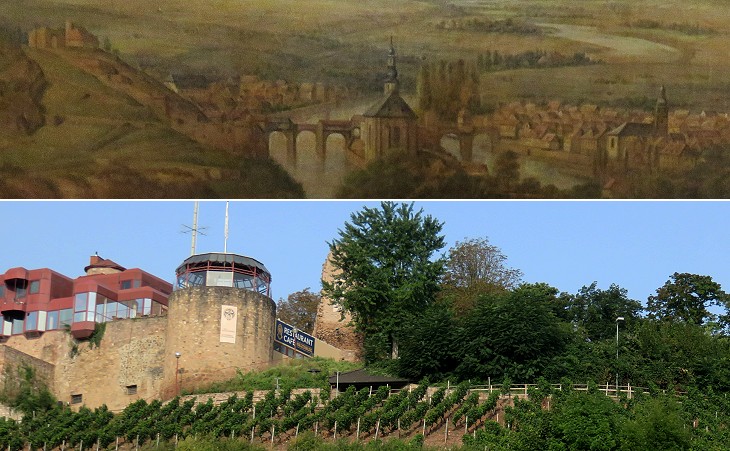 (above) XVIIIth century view of the town; (below) the castle and the surrounding vineyards

One of the chief diversions of the inhabitants of Mentz (Mainz) is to go, all the summer long, to some neighbouring mineral springs, where they use the waters. (..) While these waters are in season, Mentz, Frankfort and Darmstadt and all the neighbouring towns look as if they were quite deserted.
Thomas Nugent - The Grand Tour - 1749
The most beautiful scenery of the Nahe is confined to the vicinity of Kreutznach and Oberstein. Kreutznach. A flourishing town of 9000 inhabitants, belonging to Prussia, in a picturesque situation. It has been much resorted to of late on account of its saline spring, situated on an island 1 mile above the town. Baths are erected near it within a grove of acacias, and an avenue of poplars leads to the spot. There are also brine baths here.
John Murray - A Hand-Book for Travellers on the Continent - 1838 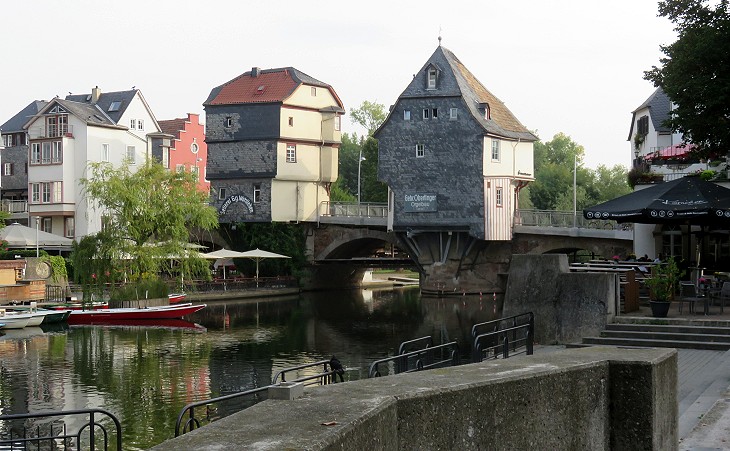 A very pleasant excursion may be made up the Nahe from Bingen to Kreuznach. Murray
The River Nahe is a left tributary of the Rhine. It flows almost parallel to the Mosel in a south-west to north-east direction. Bad Kreuznach is only a few miles from Bingen where the Nahe empties into the Rhine in a very picturesque region which appealed strongly to the Romantic movement. The many foreigners who travelled along the Rhine in the early XIXth century began to explore the valleys of its tributaries. 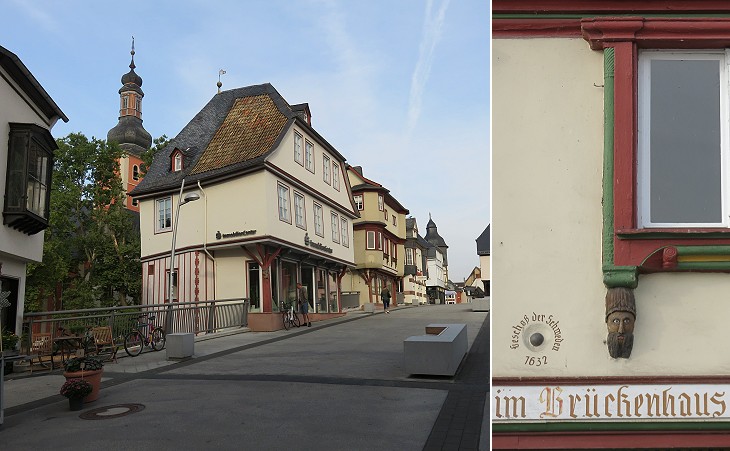 Alte Nahebrücke: (left) two of the four houses standing on one side of the bridge; (right) a cannonball embedded in a house; it was shot by Swedish troops in 1632, during the Thirty Years' War

The bridge was built in ca 1300 and the four houses are first recorded in 1495. They were rebuilt between 1595 and 1612. During the Thirty Years' War the town was seized eight times by the armies of the many nations involved in the conflict. In 1688 it was occupied and sacked by French troops. In 1697 King Louis XIV gave up his claims on the region and Bad Kreuznach became a stable possession of the Electorate of Palatinate. The town however was surrounded by territories of the Archbishop-Elector of Mainz. After the Napoleonic Wars it was assigned to the Kingdom of Prussia. 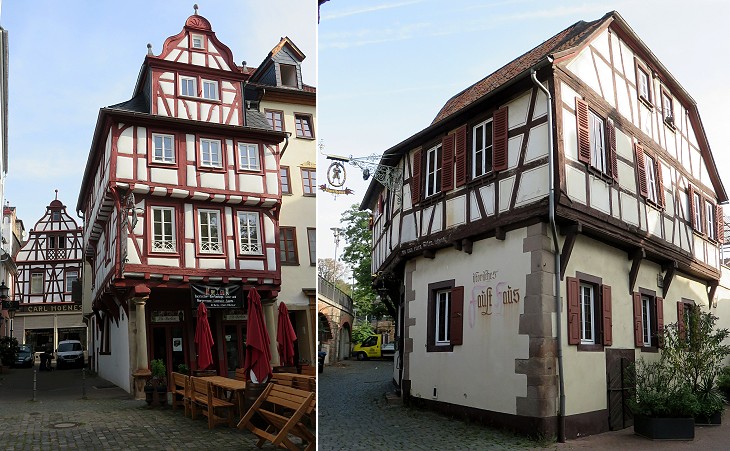 Bad Kreuznach was heavily damaged during WWII (you may wish to see the traditional houses of Limburg an der Lahn, a picturesque small town which was not bombed); today it has a much more picturesque aspect than it ever had and an incredible number of beer and wine halls. A restaurant claims to be located in a 1492 house where Doctor Faust lived for a short time in 1507 when he taught at the local Latin school. This legendary magician and astrologer inspired works by Marlowe, Goethe and Berlioz. 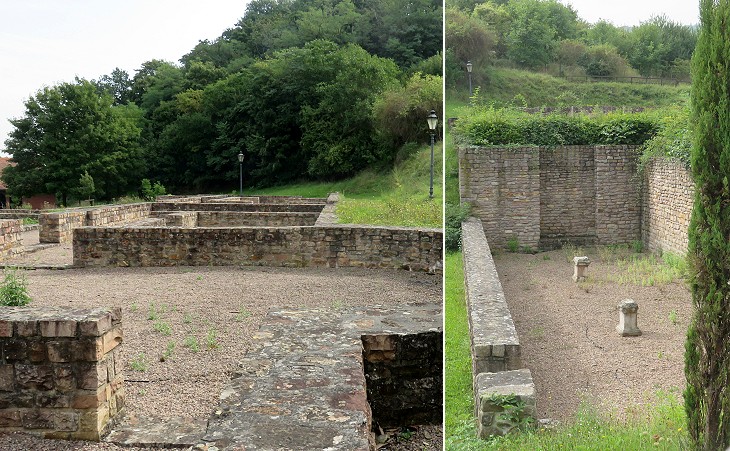 Site of the Roman Villa

Bad Kreuznach owes its name to Cruciniacum, a small Roman town on the road between Mogontiacum (Mainz) and Augusta Treverorum (Trier). Initially it was a military post, but in the second half of the Ist century AD it became a civilian settlement. The Romans greatly favoured the development of agriculture in the region as a mean to stabilize their conquest and in the late IIIrd century they promoted viticulture which soon became a major contributor to the local economy. Gravestones, potteries, glassware and other ancient materials were found at Bad Kreuznach and its environs, but only in 1966 some remains on a hill outside the town were identified as those of a large Roman villa. Archaeologists decided to relocate its fine mosaics to a modern museum. The remaining outdoor evidence of the building indicates it had a peristyle, something which is rare to be observed north of the Alps. In the IVth century is was turned into a fortified site. 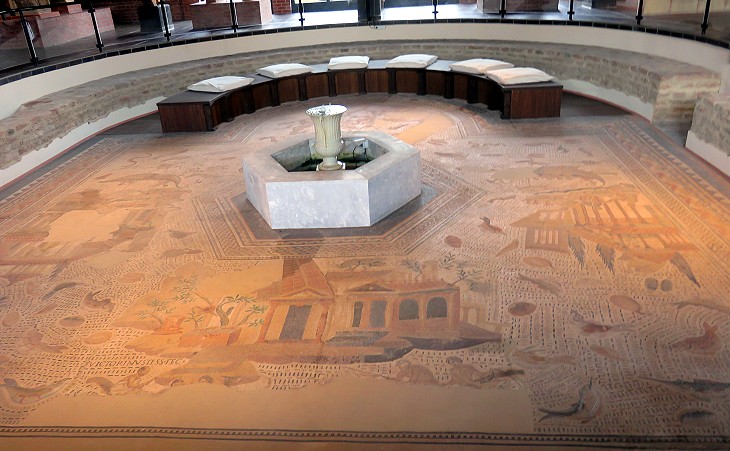 Römerhalle Museum: Mosaic of Oceanus (which was found in 1966)

The villa is remarkable also for having a rare example of mosaic which is not divided into smaller parts by geometric bands. These mosaics are called "Nilotic" because they often depicted scenes occurring along the River Nile and because they were popular in Egypt. A large Nilotic mosaic decorated the villa of Emperor Hadrian at Palestrina and that at Bad Kreuznach is very similar to it although the scenes and the subjects are related to the sea, rather than to the Nile. The mosaic was signed Victorinius Tess(ellarius) Fec(it), tessellarius meaning maker of floor mosaics by means of tesserae (small pieces of coloured stones or glass). Another inscription has been interpreted as indicating the names of the consuls who were in charge in 234, the last year before a very turbulent period of Roman history. The mosaic most likely decorated a triclinium (dining hall) which was embellished with a fountain. It had an apse where the landlord and his relatives or guests ate on couches, similar to what can be seen in a beautiful mosaic at Vienne. 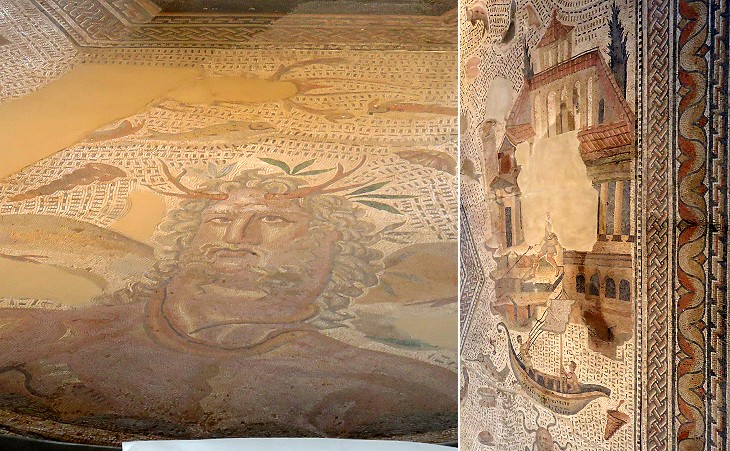 Mosaic of Oceanus: (left) Oceanus; (right) a ship carrying amphorae, an angler and an imposing building

Victorinus was a very talented mosaic maker and was well aware of the iconography of the Sea God Oceanus, who was always portrayed wearing crab horns. Oceanus surrounded by sea creatures was a very popular subject, not only in nearby Gaul and Spain, but also in Africa and Asia. The mosaic shows also an angler, another popular subject which can be seen in mosaics at Leptis Magna, Carthage and Thugga, all towns in the Roman province of Africa and even on silver bowls. It is possible that Victorinus had received drawings of mosaics from workshops of that province, which achieved levels of excellence in the art of mosaic making, also in the depiction of large buildings. 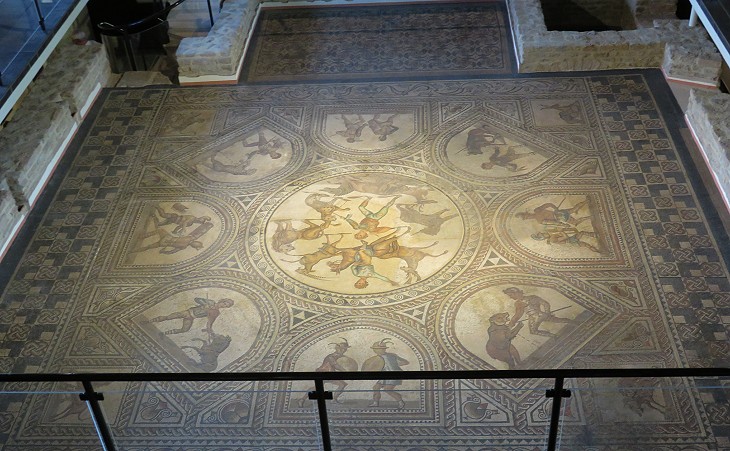 Römerhalle Museum: Mosaic of the Gladiators

The presence of a mosaic depicting gladiatorial fights was already known in the late XIXth century. In line with the practice of the time it was brought back to the aspect it had when it was initially made, depriving it of its venerable decay. It decorated a smaller triclinium, which was heated by an hypocaust system. 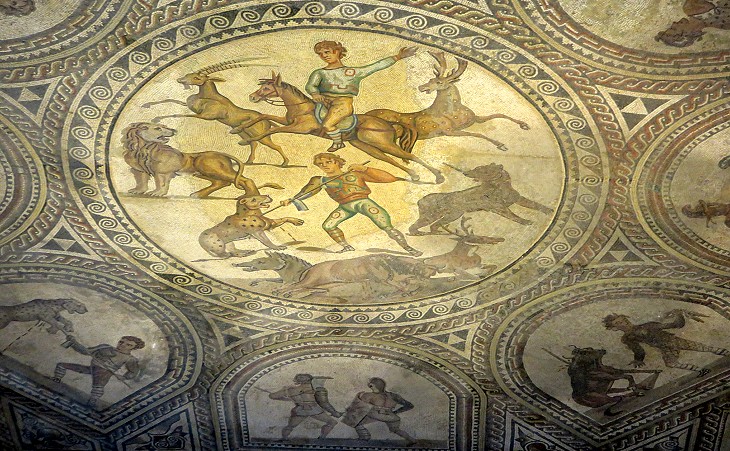 Mosaic of the Gladiators: details

Upon Trajan's return to Rome ever so many embassies came to him from various barbarians, including the Indi. And he gave spectacles on one hundred and twenty-three days, in the course of which some eleven thousand animals, both wild and tame, were slain, and ten thousand gladiators fought.
Cassius Dio - Roman History - translation from E. Cary - Loeb (1914)
The central medallion of the mosaic does not convey the same feelings as Dio's description of the games held in honour of Trajan. It rather seems to depict a performance in a modern circus. The capture of wild beasts in Africa and their transportation to Europe was a well-organized trade, but, because of the associated costs, lions and tigers were often made to fight against wild donkeys or other animals which they could easily overcome as shown in a mosaic at Nennig in the Mosel valley. 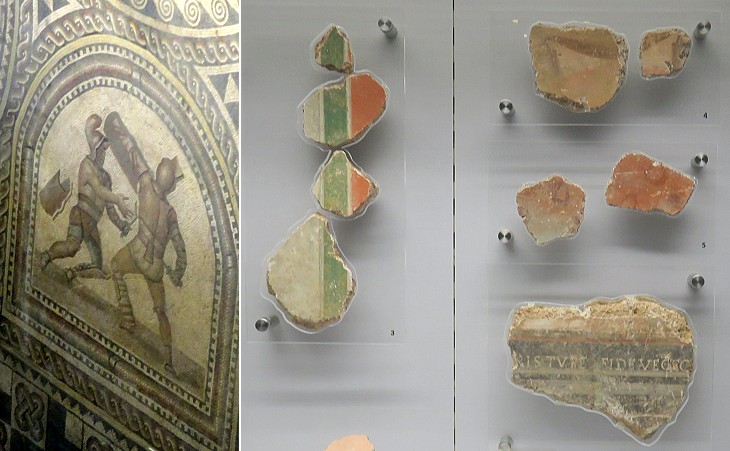 Römerhalle Museum: (left) Mosaic of the Gladiators: a detail showing the final phase of a gladiatorial combat (see similar scenes in a mosaic found near Rome); another detail is shown in the image used as background for this page; (right) fragments of frescoes