- Christian Tipasa
(detail of a mosaic at the Museum of Cherchell)

You may wish to see an introductory page to this section or a page on Roman Tipasa first. 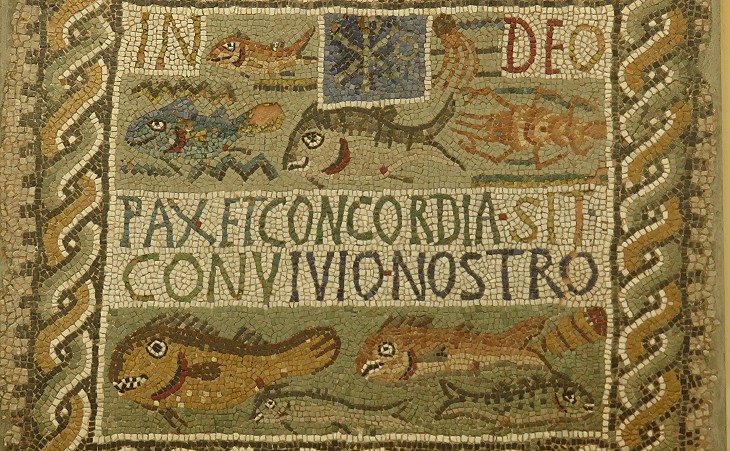 Museum of Tipasa: mosaic found in 1968 in a necropolis near the town: the inscription says "Through God may peace and concord attend our meeting" and it suggests that the Christians of Tipasa yearned for peace and concord after years of religious rifts

About A.D. 371 Firmus, at the head of an army composed of natives anxious to free themselves from Roman domination, bandits of all kinds, and Donatists animated by violent religious hatred, invaded this part of Mauretania, sacked its cities, especially Icosium and Caesarea, but failed to reduce Tipasa. Soon after, Theodosius, sent by Valentinian against Firmus, reached Tipasa, and it was probably about this time that important edifices were constructed and existing ones embellished. In A.D. 484 the Vandal king Huneric imposed upon the Catholic inhabitants of this city an Arian bishop, in order to compel them to embrace that heresy; a great number of the inhabitants fled to Spain, and some of the remainder, who refused to apostatise, had their right hands cut off, and their tongues torn out.
John Murray - Handbook for Travellers in Algeria and Tunis - 1878
Several Writers about the VI. Century give us a particular Account, how some of the Orthodox Citizens of Tipasa, after the Arians had cut out their Tongues, were notwithstanding endowed with the Gift of Speech, and capable to tell the History of their Misfortunes.
Thomas Shaw - Travels, or, observations relating to several parts of Barbary and the Levant - 1738 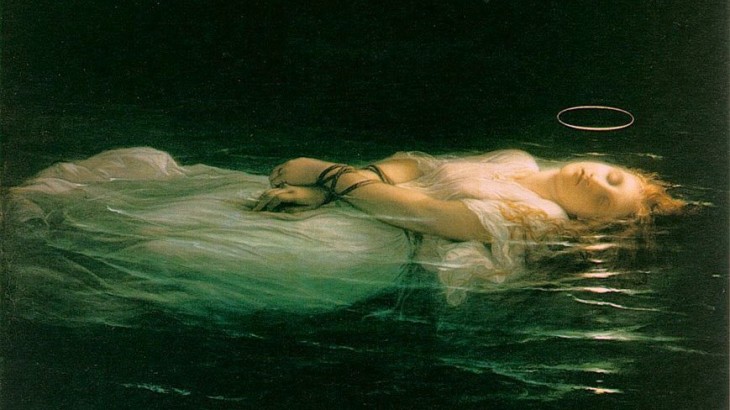 Louvre Museum: Paul Delaroche - The Young Martyr - 1855; the painting is not specifically named after St. Salsa, but the painter might have had her martyrdom in mind

The Passion of St. Salsa is the key event of the Christian history of Tipasa: A hundred years after paganism was deprived of official support, the mass of the people still continued to adore the local deity, a bronze serpent with a golden head and eyes of precious stones, a relic probably of the Punic worship of Eshmoun (similar to Greek Asclepius). Her parents were pagans, but Salsa had been baptized, and though only fourteen years of age, she was animated with the most enthusiastic faith. One day her parents took her, in spite of her reluctance, to a feast in honour of the brazen serpent. She protested fearlessly against the sacrifices and impure rejoicings which took place, and when the spectators had finished their rites and were sunk in a drunken sleep, she took the head of the serpent and cast it into the sea. She returned with the intention of throwing the body in also, but it made so much noise in falling that it awakened the sleeping populace, who rushed upon the girl, stoned her, pierced her with swords and arrows, and cast her body into the sea that it might be deprived of burial rites.
The waves, however, carried it into the harbour, close to the vessel of a certain Saturninus, who had just arrived from Gaul; a tempest suddenly arose, and Saturninus, then asleep, had a vision that if he did not give burial to a body in the sea near his vessel, he would certainly perish. At first he paid no attention to this warning, but the gale increased, and as all hope of safety appeared gone, he leapt into the water, and his hand was miraculously guided to the girdle of the saint. He took the body in his arms, rose to the surface, and immediately the storm was succeeded by a perfect calm. Saturninus and his companions took the body ashore and buried it in a humble chapel, near the port and outside the ramparts. Murray 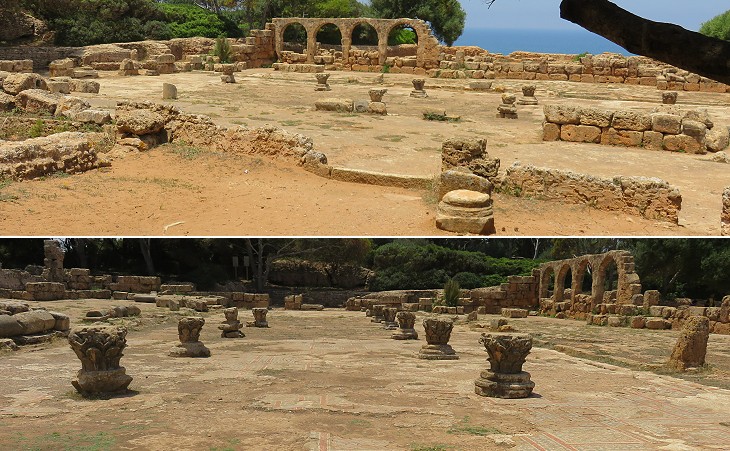 Views of the Great Christian Basilica on the western hill

This is a very important edifice close to the end of the ramparts, on the western hill, to which it has given its Arabic name, Jias el-Knissa, Cape of the Church. It was evidently the principal church of the city, but it is now in a very bad condition, having served as a quarry for generations. It is still possible to make out the plan. It appears to have been one of the largest churches in North Africa. It is turned in the orthodox manner, with the apse to the E. and the door to the W. It was divided into seven naves, separated by pillars surmounted by archivolts. Murray 1895 edition 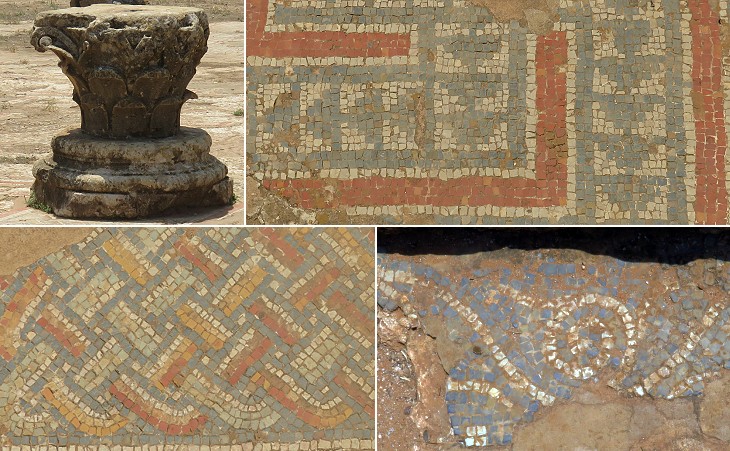 Details of the Great Christian Basilica

The central nave was the largest and was entirely paved with mosaics, showing an infinite variety of designs. At a period subsequent to the original construction, this nave had been divided into three by two rows of columns, perhaps to support the roof; this is shown by their being simply built on the mosaic floor without any foundation or any break in the continuity of the pattern. Only three entire capitals have been found - two were Corinthian and one was Ionic. Eight uninjured bases still exist. A great part of the apse has fallen into the sea. To the N. of the basilica were a number of dependencies, part of which have also fallen into the sea; one was a small chapel, another a baptistery with a central font for immersion; adjoining it was a hall paved with mosaics, only fragments of which remain, showing figures of birds. Murray 1895

(left) Round tower at the top of the western walls and Mount Chenoua in the distance; (right) nearby memorial to Albert Camus (1913-1960), a French writer born in Algeria and best known for his novel "The Plague". The inscription says: "Here I understand what is meant by glory: the right to love without limits" from "Nuptials at Tipasa" - 1939 - Translated by Ellen Conroy Kennedy

In the spring, Tipasa is inhabited by gods and the gods speak in the sun and the scent of absinthe leaves, in the silver armour of the sea, in the raw blue sky, the flower covered ruins, and the great bubbles of light among the heaps of stone. At certain hours of the day the countryside is black with sunlight. The eyes try in vain to perceive anything but drops of light and colours trembling on the lashes. The thick scent of aromatic plants tears at the throat and suffocates in the vast heat. Far away, I can just make out the black bulk of the Chenoua, rooted in the hills around the village, moving with a slow and heavy rhythm until finally it crouches in the sea. (..) Deep among wild scents and concerts of somnolent insects, I open my eyes and heart to the unbearable grandeur of this heat-soaked sky. It is not so easy to become what one is, to rediscover one's deepest measure. But watching the solid backbone of the Chenoua, my heart would grow calm with a strange certainty. I was learning to breathe, I was fitting into things and fulfilling myself.
Albert Camus - Nuptials at Tipasa Louvre Museum: silver patera found at Cape Chenoua in 1893 and most likely made at Constantinople

This bowl is dated early VIth century AD and it shows the persistence of traditional subjects. It is decorated with three anglers surrounded by fish, shells and shellfish. Sea scenes were a legacy of Greek art of the Hellenistic period. They were designed after models created between the IIIrd and Ist centuries BC. You may wish to see ancient paintings, mosaics and statues depicting fishermen. 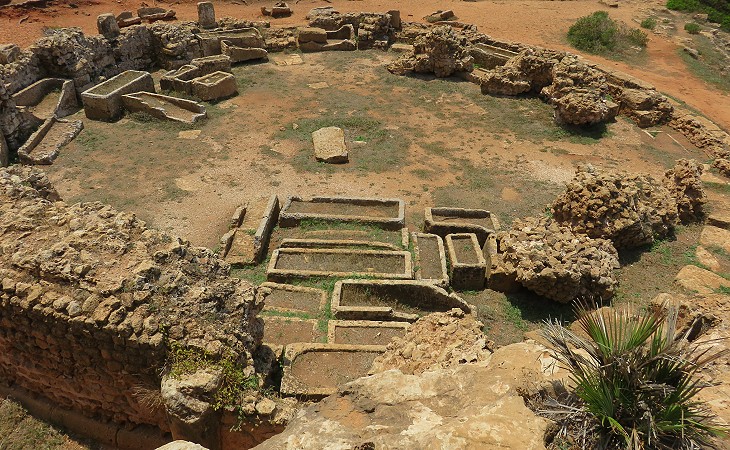 Round Mausoleum seen from the western walls

There are many tombs all around, some excavated in the rock, and even mausolea. One of the latter is very remarkable; it is just outside the north-western point of the ramparts, near the great basilica. It is a circular building with half engaged marble columns on the exterior wall. The interior diameter is 18 metres, with 14 arcosolia round the circumference for the reception of stone coffins, two in each; the sarcophagus in the niche opposite the door was probably that of the founder; it was of marble, richly sculptured, now broken into minute fragments. A number of stone coffins were placed in the central portion, probably at a later period. It is doubtful whether this large mausoleum could ever have been covered in. Murray 1895 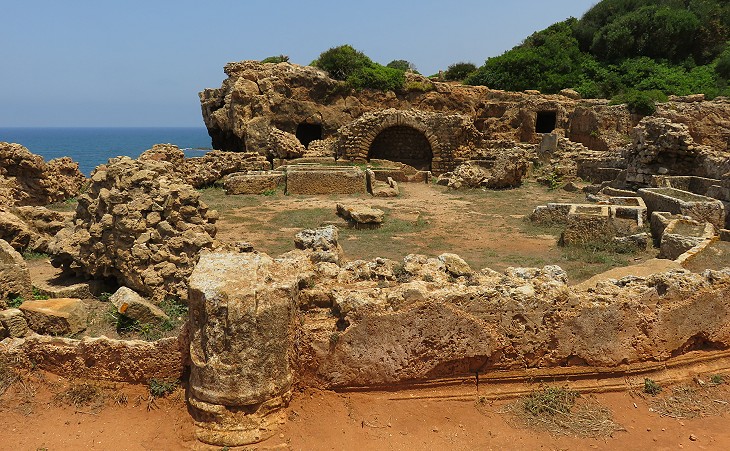 Ancient temples did not house tombs and ancient mausoleums were not dedicated to gods. Christians built churches on the sites where martyrs were buried (e.g. S. Paolo fuori le Mura) or above catacombs (e.g. S. Sebastiano fuori le Mura). These buildings had a specific purpose, but they led to a more general belief that being buried inside a church, possibly one which housed some holy relics, would help the dead in the Day of the Last Judgement. Some churches were built with the main purpose to be used as a graveyard (see those at Salona in Dalmatia and Tarragona in Spain) and the Round Mausoleum of Tipasa could have been one of them. 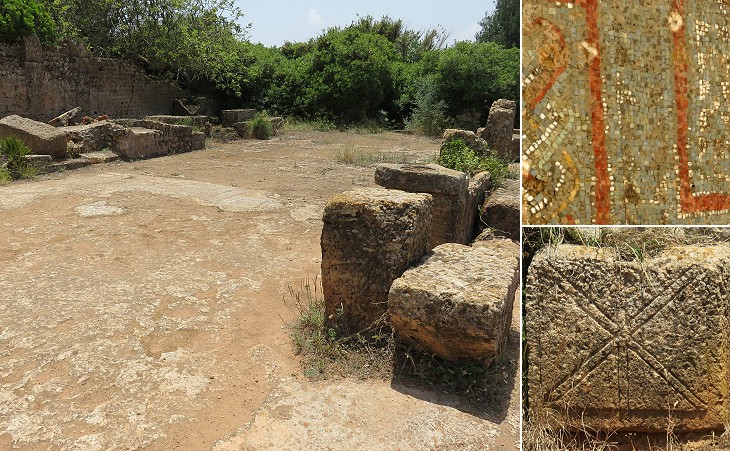 (left) Basilica of Bishop Alexander; (right-above) fragment of a floor mosaic; (right-below) stone decorated with a Chi Rho, a Christogram; another Christogram showing also the letters alpha and omega can be seen in the image used as background for this page; it was part of the mosaic decoration of a tomb of Tipasa

The Basilica of Bishop Alexander was somewhat irregular in form, divided into a nave and three aisles by two rows of pillars. The first was entirely covered with mosaics. To the E. is a sort of arch, composed of nine stone coffins, which were formerly covered with mosaics; the inscription on the floor in front of them gives some idea of their nature; it is in verse, and proves that the people buried there were held in veneration, perhaps predecessors of Bishop Alexander in the see of Tipasa, in whose honour he had constructed this church. At the W. end of the church is an apse with several tombs. The whole building is full of stone coffins covered with mosaics. Its date is probably about the end of the 4th century. Murray 1895
The basilica is outside the western walls of Tipasa and it was identified and studied by Abbé Saint-Gérand, the local priest in 1892. 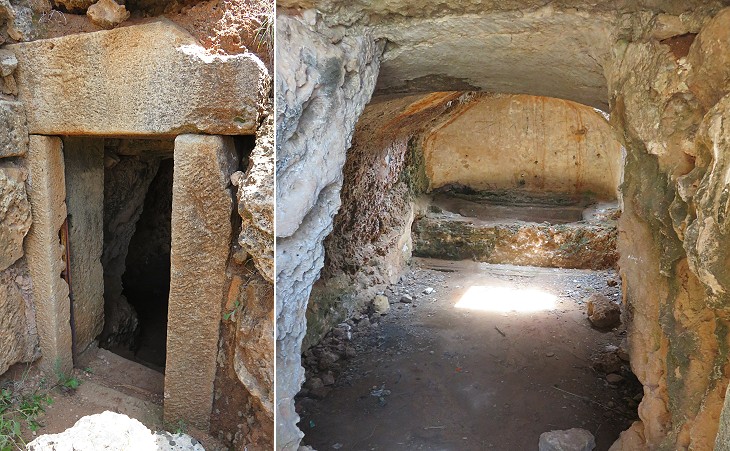 "Crypt" of Basilica of Bishop Alexander

Later archaeological research found an empty sarcophagus inside a nearby rock cut tomb. It is assumed to be that of Bishop Alexander, whose name was not recorded by historical sources prior to the discovery of the basilica he founded. 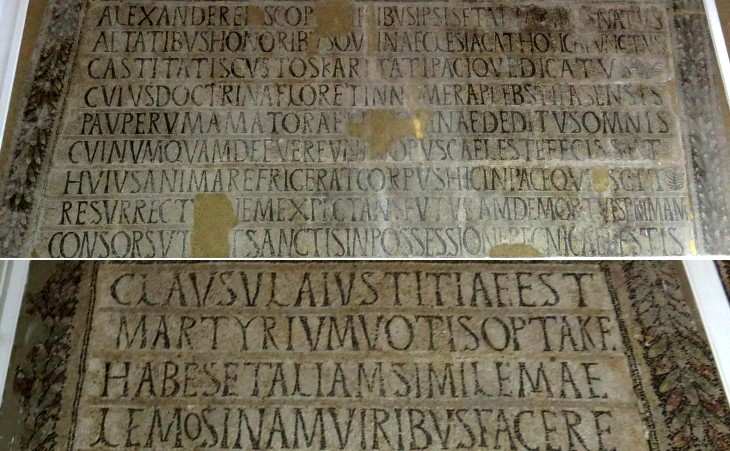 The inscriptions are written in Latin verses; they ought to be hexameters, but they do not fully comply with metric rules. They were most likely influenced by works by Commodian, a Christian Latin poet of the IIIrd century. The epitaph touches on some points of Alexander's life: he was castitas custos (warden of chastity), karitati pacique dicatus (devoted himself to charity and peace) and aelemosinae deditus (alms giver). 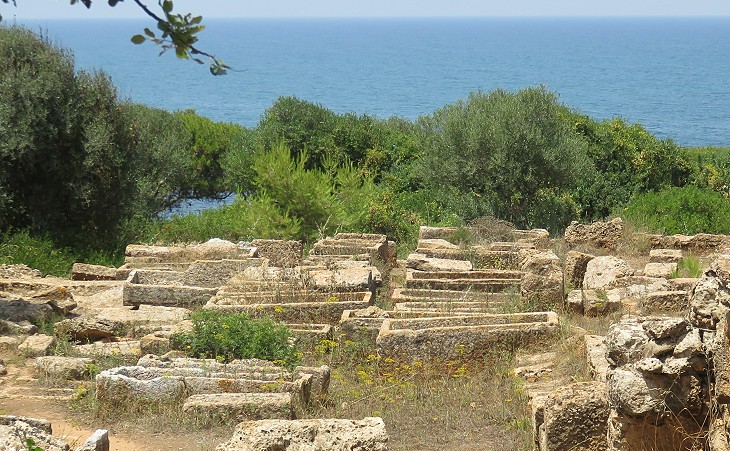 Necropolis of the Bishops and Martyrs near Basilica of Bishop Alexander

As I climbed one after another of the hills, each brought a reward, (..) like the basilica on the West hill too, which still has its walls and is surrounded by a great circle of uncovered ornamented coffins, most of them scarcely out of the earth, whose nature they still share. They used to contain corpses; now sage and wallflowers grow in them. Camus 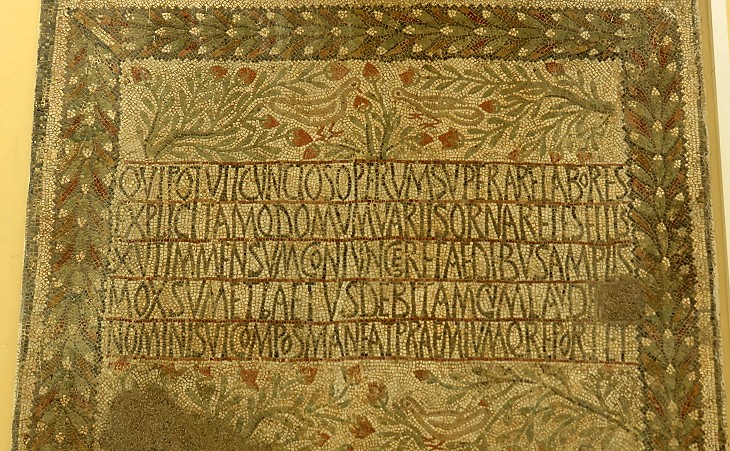 Museum of Tipasa: floor mosaic found at the foot of the central hill in 1916. The inscription celebrates the completion of a Christian building on the site of a non-Christian one

After the destructions brought about by the Vandals Tipasa declined, although there is some evidence of Byzantine walls and repairs. At the end of the VIIth century, when the region was conquered by the Arabs, it was in such a poor state that they called it Tefassed, the spoilt one.

Return to see the Main Monuments or the Central Hill.